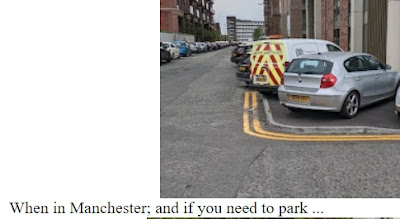 Always the public spirited one, Isle if Wight Alan reminds fbb that the Highway Code is quite specific ... 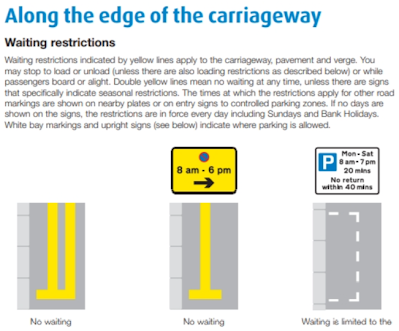 ... as it reminds us (who could ever forget!) that double yellows apply .,.

... not just to the actual road. He refers blog readers to Puckpool Hill (Isle of Wight) where a verge has recently been cleared alongside no parking stripes. 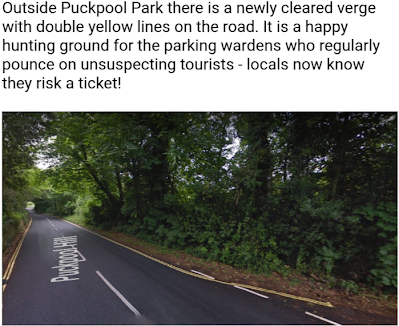 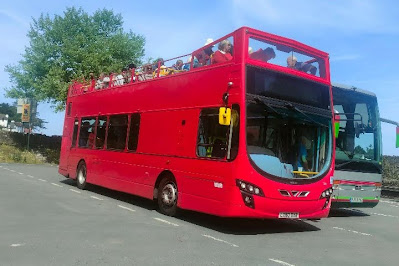 A post from a twitterer was enthusing about the Exmoor open top service, operated by Buses of Somerset, but branded as part of First Kernow's Adventures by Bus. 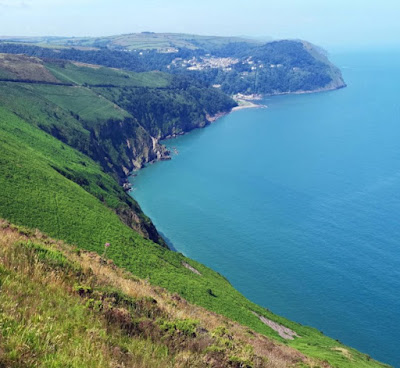 Gorgeous - but surely the bus should look like this? 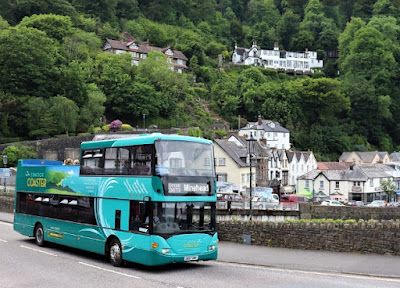 The red bus (LX60 DXB) was originally with GoAhead's London division and looked like this. 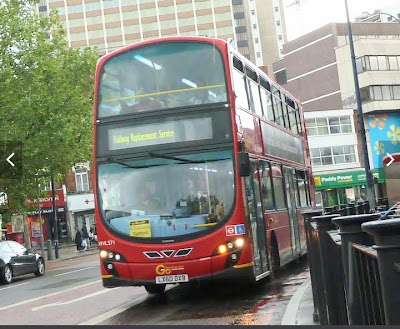 It, and a few of its chums, were converted to open top ... 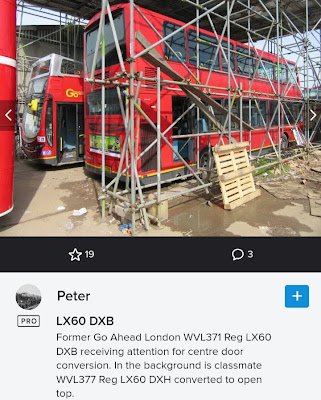 ... for London City Tours. Now merged with (i.e. absorbed by?) Sightseeing Tours, there were presumably some open toppers spare. Hence red buses at Minehead and Lynton!
Doesn't seem right, does it?
Not How We Was Teached! 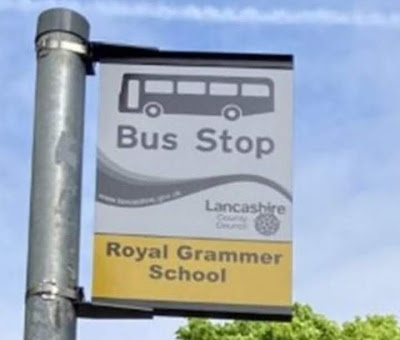 Embarassment outside the prestigious educational establishment in Lancaster ... 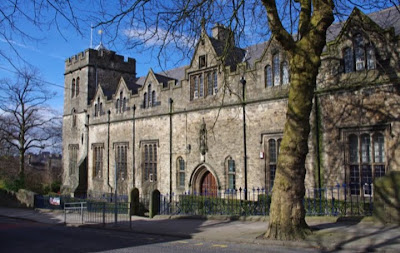 ... with the stop name not spelled write. fbb would never make such a mistake; he has been tort proper.
Timmy And Siddy
They made a good job of handling the delights of the Waterloo and City line including a depot visit at Waterloo, reference to the Armstrong Lift which disappeared under the Eurostar terminal. It was used for lifting carriages into and out of the W&C station. 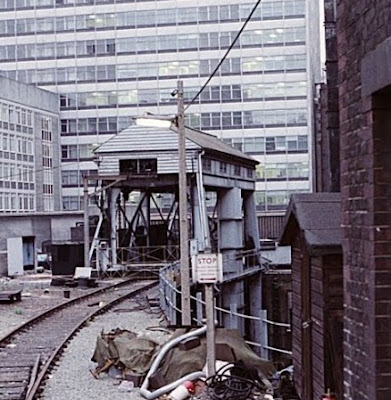 Of course they visited the Trav-o-lator at Bank ... 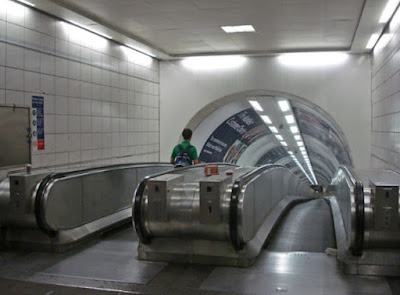 ... but failed to mention that one of the two "walking" tunnels still exists. 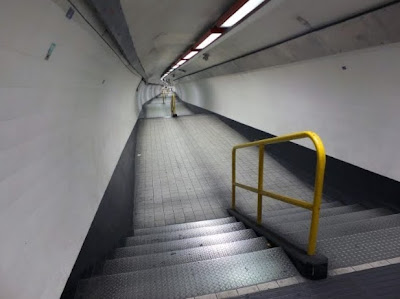 It would have been fun to see Timmy and Siddy sprinting up the slopes plus steps as well as the Trav-o-Lator! They also introduced fbb to something he did not know - but probably could have guessed had he been transferring to the other lines in a more leisurely manner.
About half way along the wiggly tunnel which by-passed Trav-o-Lator, steps and cramped booking hall (see map below) ... 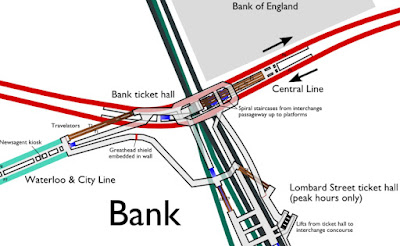 ... and painted red (so fbb didn't ever notice it!) is the remains of the tunnelling shield used to build the line way back in the 1890s. 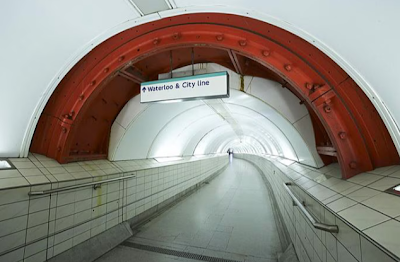 Perhaps they will have a programme about the improvements under way at Bank Station and then they will mention the link with Monument on the District and Circle lines. 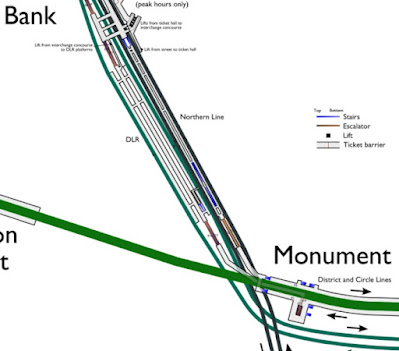 But the "second half" of last weeks episode concerned a station which fbb knew about, but not quite enought - so he feels a future blog coming on!
(Map from the "London List" blog)
Secrets of London Underground is broadcast on Thursdays on the Yesterday channel. It is also streamed on UKTVPlay.
Another Tank That Never Was
The box said "for adult collectors" which is not entirely true. It would certainly be for collectors of Coca Cola branded railway models ... 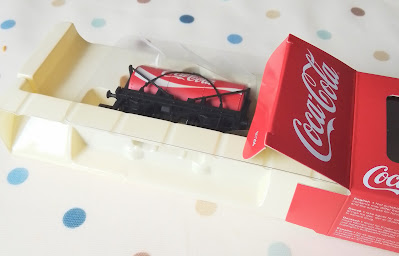 ... and the model is certainly well branded, as is the box! 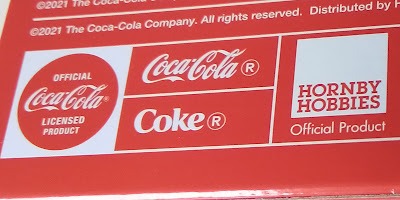 The wagon has its genesis in the very first tank wagon made by Triang. 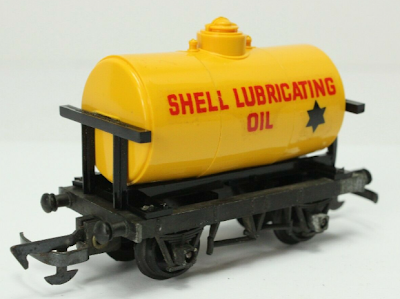 Note the very crude brake gear nowhere near the wheels! But, unlike Hornby Dublo, you could see its structure. Over the years the model gained a plastic chassis, still with out-of-line brakes, but with added strapping in flexible plastic. 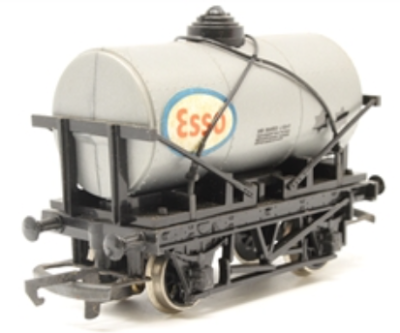 The strapping broke easily and you can find second hand models with broken bits ... 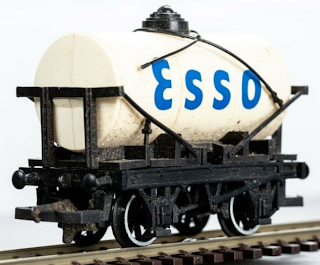 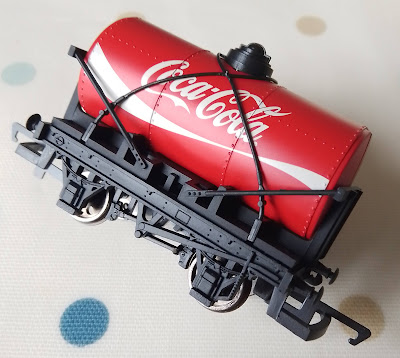 ... is based on a model that is nearly 70 years old. It's brake blocks are now in the right place.
Leaving aside the unreality of a tank of Coke (!), they model is not a good representation of any full sized wagon. The Bachmann version is much, much better ... 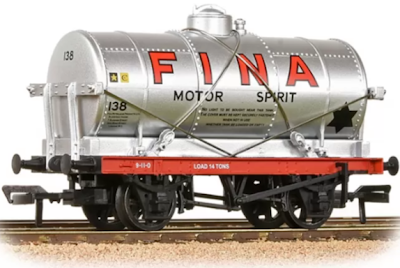 ... and matches well with a lovingly restored full-sized tanker at Didcot Railway Museum. 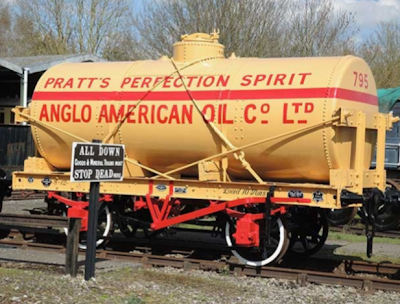 A serious collector of well detailed realistic models would not give the ex-Triang design shelf room, except, perhaps, to laugh at it. Even with a more sensible livery ... 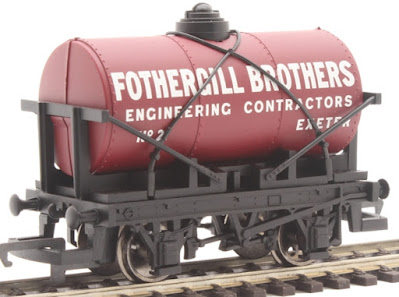 ... it doesn't really look "right". There was, however, an engineering company in Exeter called "Fothergill" - presumably it did operate a tank wagon or two?
But it is another wagon that never existed to add to fbb's "side collection".
What's next?
More transport related bits and pieces tomorrow.
Next Variety blog : Sunday 15th May
Posted by fatbusbloke at 02:00