The Extremes Of Bus Travel (2)

Not Quite The Utter Extreme 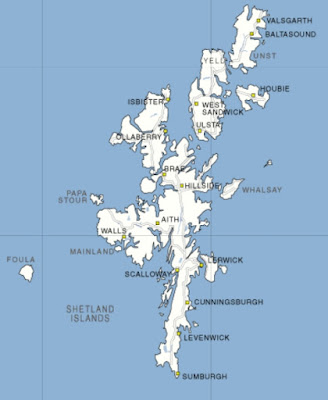 That is Shetland. The timetable that fbb received from correspondent Keith is for Orkney, somewhat nearer the Scottish mainland. Now there's a problem - two mainlands. The "Big Island" of Orkney is called "Mainland". 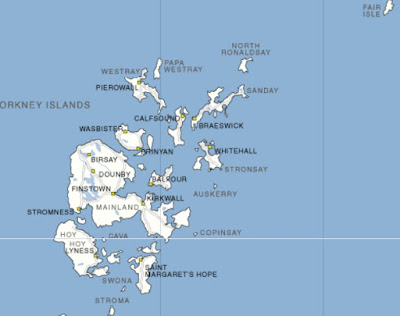 Mainland is linked south by a series of causeways ... 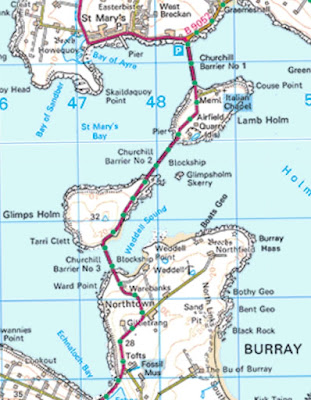 ... and a fourth taking you on to South Ronaldsay. 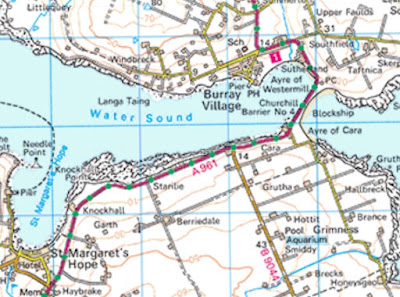 Known collectively as "The Churchill Barriers", they were of WW2 construction.
On 14 October 1939, the Royal Navy battleship HMS Royal Oak was sunk at her moorings within the natural harbour of Scapa Flow, by the German submarine U-47 under the command of Günther Prien. U-47 had entered Scapa Flow through Holm Sound, one of several eastern entrances to Scapa Flow.
The eastern passages were protected by measures including sunken block ships, booms and anti-submarine nets, but U-47 entered at night at high tide by navigating between the block ships. 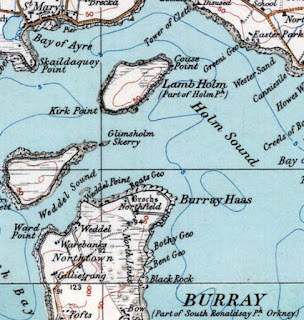 To prevent further attacks, the First Lord of The Admiralty Winston Churchill ordered the construction of permanent barriers. Work began in May 1940 and the barriers were completed in September 1944 but were not officially opened until 12 May 1945, four days after Victory in Europe Day.
The barriers were not handed over by the Ministry of Defence until 2011 when they became the responsibility of the Orkney Council
Stagecoach X1 ... 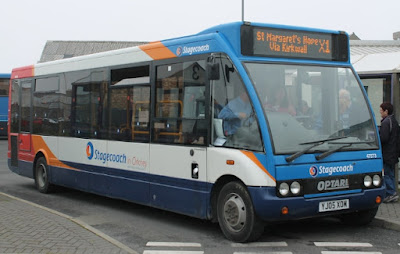 ... is a "main line" route from Stormness via Kirkwall to St Margarets Hope. 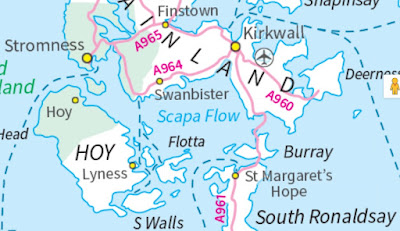 The X1 runs a luxurious every 30 minutes with some gaps. 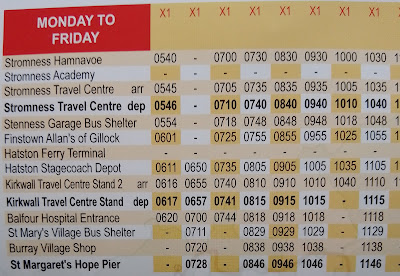 The fare for a good ride of one hour and 15 minutes is an acceptable (by today's standards) £6,25, but a return would be just £9 using a "dayrider". For regular users, or holiday explorers a weekly ticket is a modest £20.
As with Guernsey, the timetable book is replete with information (including those sample fares) and pulls the bus side of things together with a simple route map. 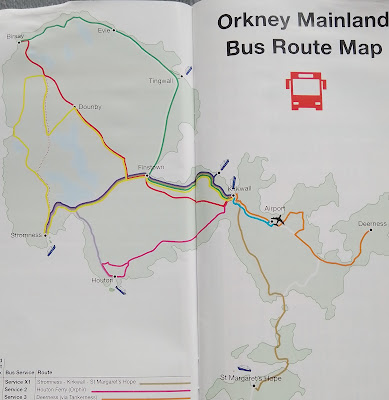 As for Guernsey, it would be better to have route numbers along the roads, rather than as a list. 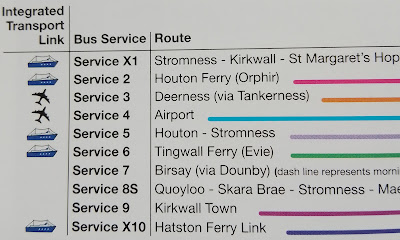 There is a Kirkwall town map which really ought to be better ... 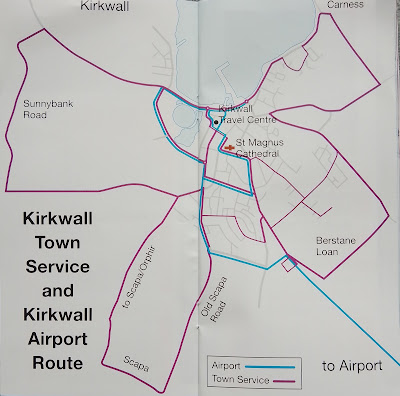 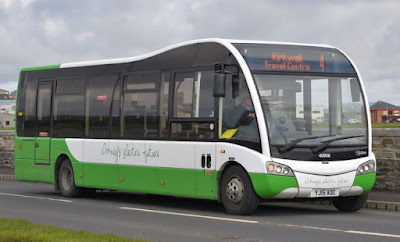 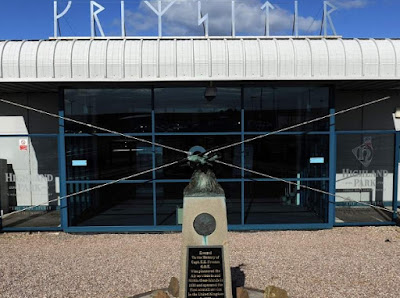 The airport was once not much more than a field but is now quite a busy place ... 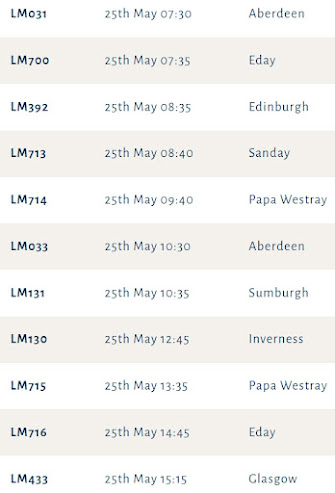 ... which will feature in tomorrow's blog.
There are a few less "obvious" bus services. 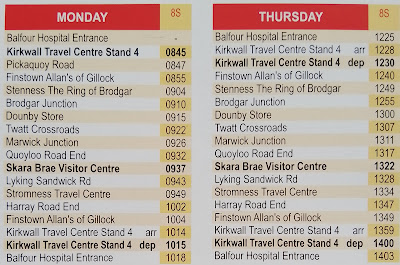 The 8S, for example, is a huge "circular" running only on certain days. It is shown in rudimentary YELLOW on the Orkney route map, and shown with sparse detail. A focus is the hospital at Kirkwall. 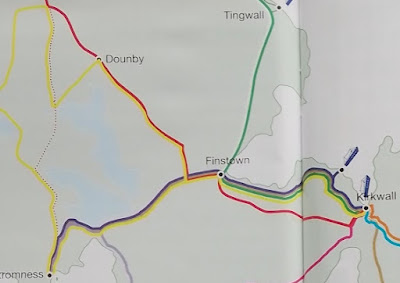 But it does go to Quoyloo (with a lavish filling station!) ... 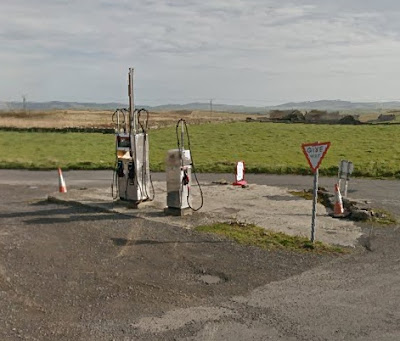 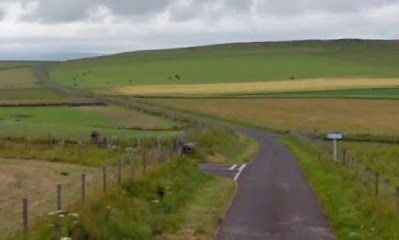 The first four brand new buses arrived in Orkney on Friday 15 October 2021.
The investment of £5.4 million in 34 brand new buses is a result of a contract between Orkney Islands Council and Stagecoach covering an 8-year period, from 2021 through to 2029.
In total Orkney will take delivery of 25 Volvo buses over coming months, with the remaining 9 buses being built by Optare.
The new fleet operated by Stagecoach will meet Euro 6 emission standards.
The first four buses arrived in Stromness on the evening sailing from Scrabster on Friday 15 October before completing their journey to their new home in Kirkwall depot.
By spring 2022 every Stagecoach bus operating in Orkney will be low-floor entry for easy access for all bus users, with easy clean leather seats and seatbelts at every seat. Like all Stagecoach buses across the UK, the new fleet for Orkney will feature contactless payments and live bus tracking on board on pubplic services that bus users can access by downloading the free Stagecoach mobile app.
So, like Guernsey, this is a contracted service subsidised by Orkney Council. How many journeys would be commercially viable is not published; but fbb guesses that a typical Mainland mainland bus operation would be minimal if it had to be profitable and unsubsidised.
Next extreme plane and ferry blog : Fri 27 May
Posted by fatbusbloke at 02:00