The Extremes Of Bus Travel (1)

But First; It Did Open!

The false fire alarm at Paddington caused, it was said, by passengers "stirring up dust". Yet again those pesky passengers spoil everything - it would run much more smoothly without them!
Far South! 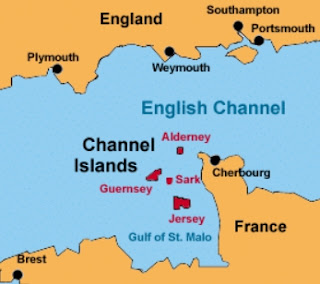 Not quote as far south as you can go - Jersey is further!
fbb is grateful to correspondent Keith for sending fbb a couple of interesting bus timetable books. They are "extreme" bus timetable books as that reviewd today is for Guernsey. Guernsey is a Bailiewick. 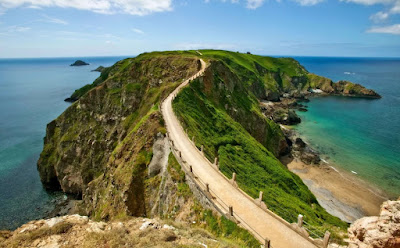 The Bailiwick of Guernsey is one of three Crown Dependencies.
Separated from the Duchy of Normandy by and under the terms of the Treaty (or Peace) of Le Goulet in 1204, the Bailiwick comprises a number of islands in the English Channel which fall into three separate sub-jurisdictions: Guernsey, Alderney and Sark. Herm is administered as a part of Guernsey.
A bailiwick is a territory administered by a bailiff. The bailiff of Guernsey is the civil head and presiding officer of the States of Guernsey, but not of Alderney or Sark. He is the head of the judiciary of the Bailiwick.
So it is part of the UK only it isn't. From 1958 it used stamps similar to the mainland "regional" issues ... 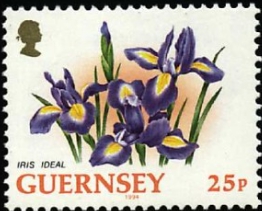 Its buses are state-run, contracted, currently, to CTPlus the giant community interest company that started life as Hackney Council Transport. Once upon a time the vehicles were painted in an attractive scheme of green and rich Guernsey-milk cream which seemed to suit the tranquil and bucolic nature of much of the island. 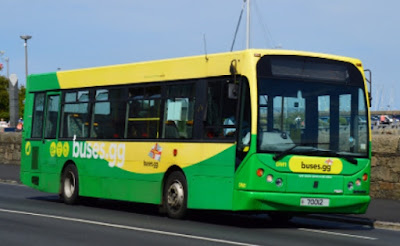 The latest livery is white with fragmented squiggles which are meaningless and over fussy. 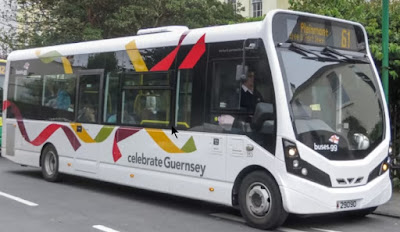 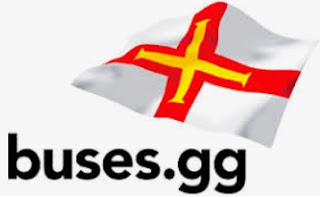 ... uses the Bailiewick's flag and the .gg internet tag for Guernsey. The booklet is in the currently popular one third A4 page size ...

... and for a timetable "anorak" like fbb it is rather boring. The bus network is excellent, but everything runs to fixed interval repeat pattern timetables with occasional hiccups at school times. There are simply no oddities!
Many routes involve loops and, subject to space constraints, buses are shown "out and back" on one table for most loopy services - so refreshing. 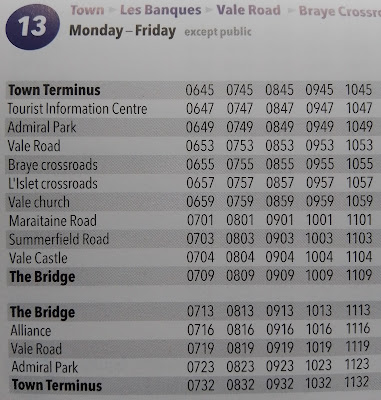 Where space is tight, the two halves are shown side by side. 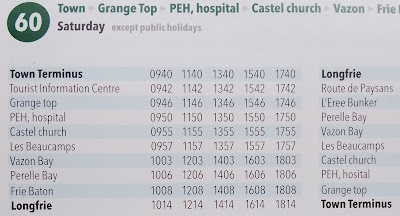 Extra journeys are added for the summer season, shown highlighted in yellow. Mostly these just add one trip to an hourly evening schedule, but, the service to the airport is upped to every 30 minutes for most of the day. 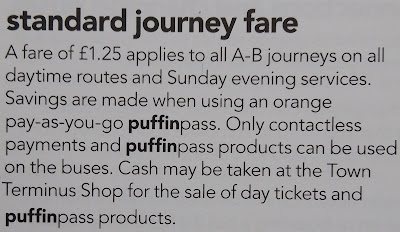 ... which includes a "transfer" to another route if necessary to complete your journey. 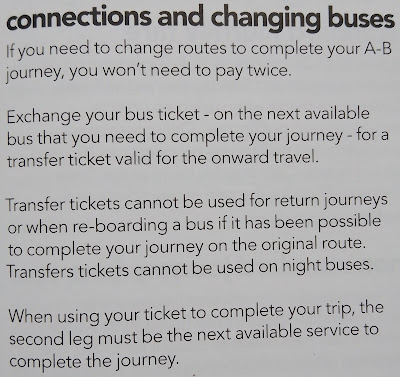 BUT, if you use the round thr Islansd route 91 or 92 the flat rate fare does not apply, you are obliged to use an all day ticket - which seems a bit steep at £7.50. 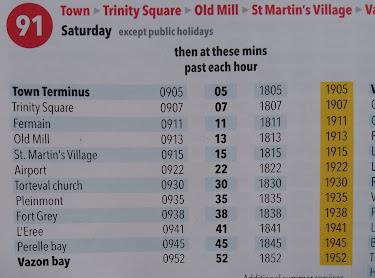 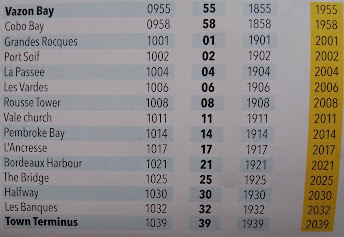 fbb is not sure how this is enforced.
The Puffin Cards offer further discounts! 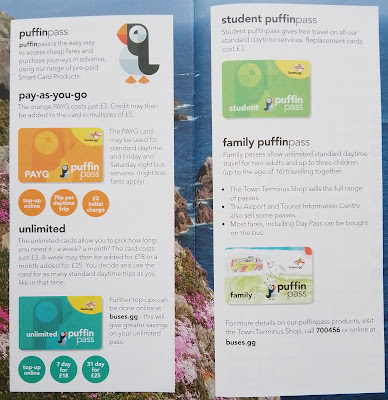 But with services generally running every hour or every half hour, the deal for the public seems very good.
There is a route map ... 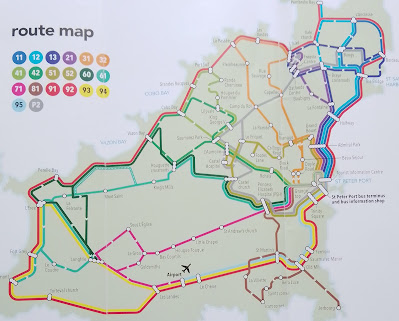 ... which would be better if there were route numbers alongside the road. The colours are fine if your eyesight is good, but could be confusing if it isn't.
There is a St Peter Port town centre map which show what stops where. Also a good idea. 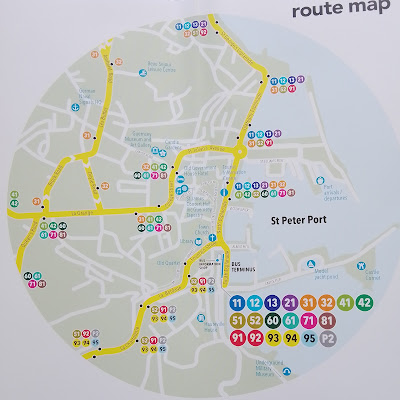 There is also a map of the night bus and Sunday evening network - a reduced service but a service none-the-less. 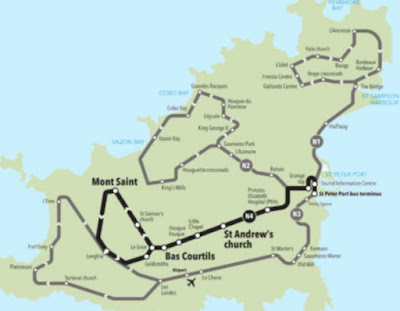 One thing is for sure.
On Guernsey, bus is the obvious, easy and cheap way to travel.
fbb has never been, but the white sands of Vazon Bay ... 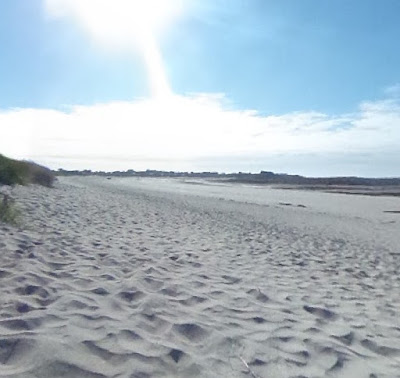 ... look astoundingly gorgeous.
fbb wishes the book told you what PEH is! 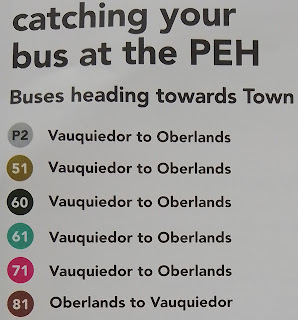 OK, he guesses it is the hospital; but it would be nice, for visitors at least, to have the full name.
And so a question. If the people of Guernsey and its visitors get a cheap, reasonably frequent bus service, albeit subsidised by the Bailiewick; is this not better than the rapidly failing "commercial" model in the big island nearby?

Tomorrow we go to another subsidised extreme.
Next Island blog : Thursday 26th May
Posted by fatbusbloke at 02:00