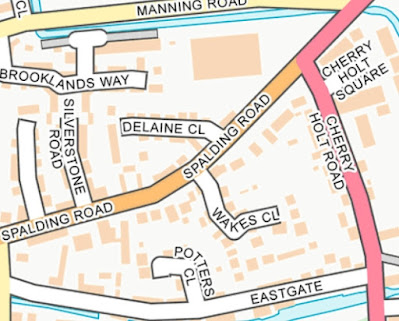 Just along Spalding Road and not far from Bourbe town centre you will pass a road called Delaine Close. Just before you get to the close, and on the opposite side of the road, you will pass the depot of "The Delaine" a much respected bus and former coach operator in the area. 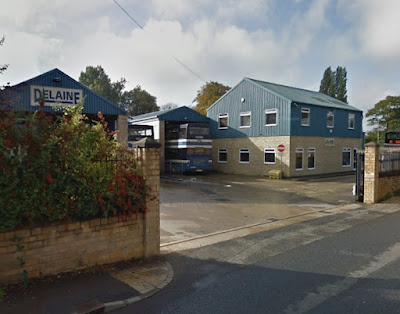 You would think that somewhere in the comopany's history was a Mr Delaine. But you would be wrong. It all started with a Mr Smith.

The second petrol pump in the area was installed on site and taxi operation commenced.

William Smith died and the company continued under the leadership of his 17 year old son Thomas Arthur.

The first motor bus a Ford T with Economy 14 seater bodywork was introduced. Services were introduced to Spalding via Twenty, Stamford via Greatford and Grantham via Corby Glen.

The main trunk service between Bourne and Peterborough was introduced.

With the threat of nationalisation hanging over the industry, the company was split into two parts. Delaine Coaches Ltd being a cream liveried coach operator and the familiar two tone blue of T A Smith Motor Services being the bus division.

The first Double Decker was introduced to cope with the increasing demand on local services. The Garage Roof was raised accordingly.

The threat of nationalization now passed, the two companies were once again absorbed into one and the title Delaine Coaches Ltd adopted as standard.

The Delaine web site gives an excellent history of the company and its operations of which the above is an extract. Here are a few more snippets.

Yeates of Loughborough built the first of a unique pair of Double Deckers especially for Delaine. OCT 566 (48) remained in the fleet for 18 years before sale into preservation in 1977. This vehicle is now currently preserved by a private collector in Belgium. 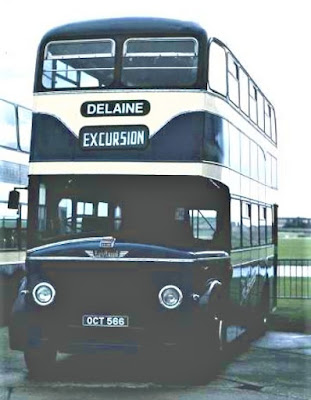 The second of the Yeates bodied Double Deckers RCT 3 (50) entered service. Being retired from full-time use in 1979, this vehicle became a regular visitor at rallies all over the country, scooping overall winner at Showbus 1982 amongst many awards collected over the years. RCT 3 still remains in the fleet today although as a preserved heritage member, she is still licensed as a PSV which it has been continually since new, making this the longest running Yeates bodied vehicle in service. 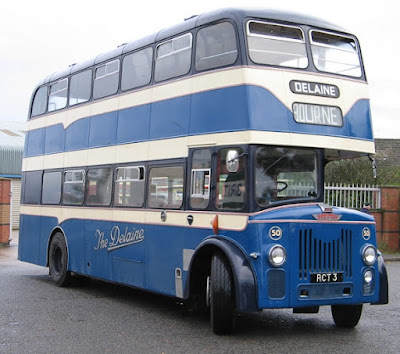 Delaine Buses become the first operator in the UK to order the new Volvo B9TL chassis. Fitted with the first example of East Lancs Coachbuilders new Olympus body. AD56 DBL (141) made its public debut at the Euro Bus Expo NEC Birmingham in November and was named 'Hugh Delaine-Smith MBE' in honour of the former company Chairman and Managing Director. 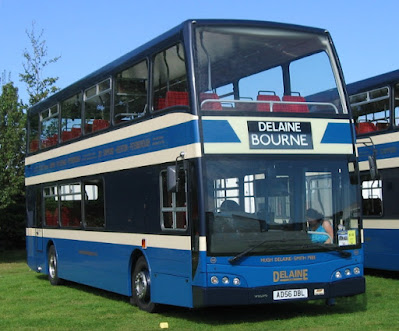 The final on-line entry in the history pages is below:-

January: Extension of the 203 Bourne-The Deepings-Stamford to Spalding following the withdrawal of Shaws of Maxey 100 Service between The Deepings and Spalding. 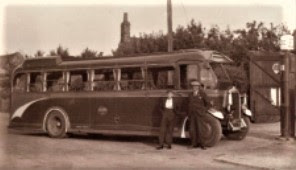 June: The Delaine Bus Museum was officially opened. (click to enlarge the graphic) 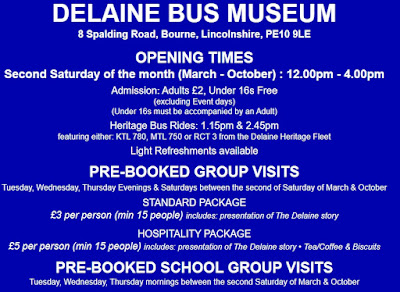 100 years of Motorbus operations, following the introduction of the first motorbus into the family business in 1919.

Tomorrow we will see a summary of the services operated by "The Delaine" today and, as a bonus, have the thoughts of Northampton correspondent Alan who visited the depot last weekend.

Born At Last! But Not Quite! 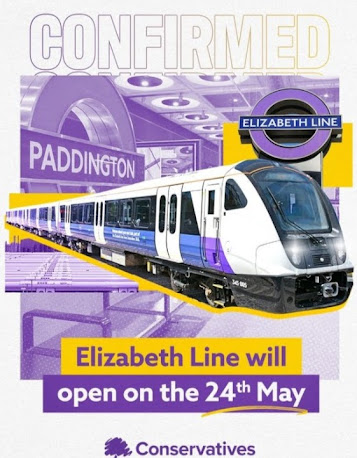 In a surprising announcement, we were told yesterday that the Elizabeth Line line would open on Tuesday 24th May. Of course, the announcement complete with "Conservatives" logo had nothing to do with today's Local Government elections.

Of course it didn't!

The problem is that it won't be FULLY opening on 24th.

But it will ALL open eventually! Honest!

Trains from Reading and Heathrow to Paddington will remain the same ... 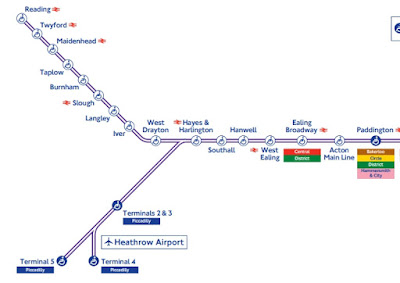 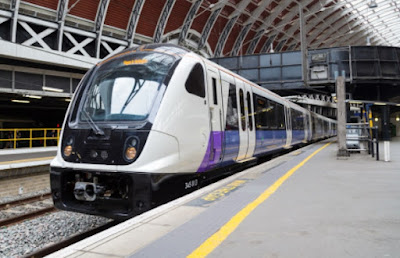 Likewise trains from Shenfield will continue to run into Liverpool Street terminus.

But you will need to change if you want to ride the middle bit. From 24th May trains will run from Paddington Elizabeth Line line station ... 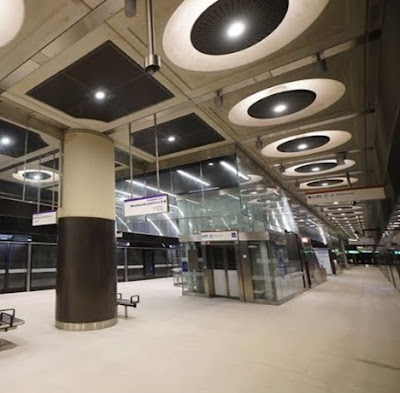 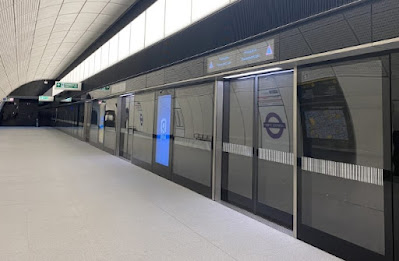 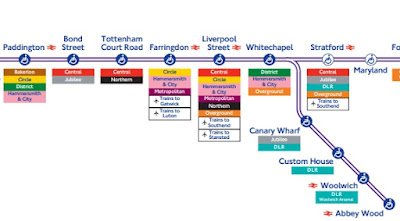 Enjoy five minutes of video of the revamped station.
And you won't be able to enjoy the new Bond Street station ... 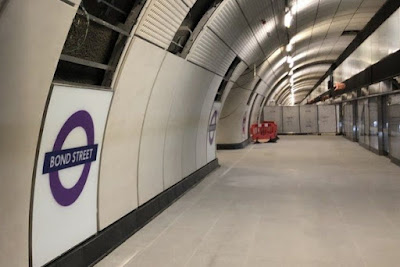 ... because it isn't finished!

So fingers crossed **, out with the rabbits foot **, hope they don't find a nest of internationally rare and threatened weevils under a bench at Canary Wharf - AND you will be able to ride on most of the new bits.

** fbb and his fellow Christians don't do "luck", but whether the Almighty would wish to intervene in the Crossrail project (a k a TfL Rail project - a k a Elizabeth Line line project) is unclear. It depends, as ever, on His purposes rather than human aspirations!

Confused by fbb's label for the new line? 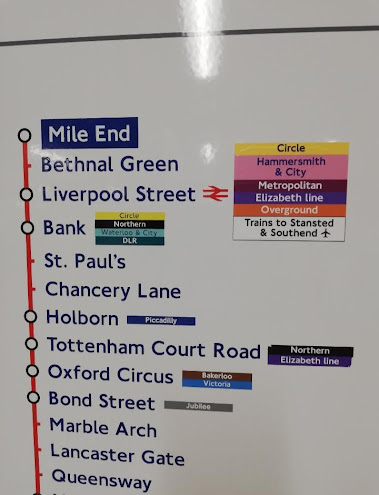 If it's Circle LINE etc it must be Elizabeth Line LINE, surely?