Definitely NOT A Mistake 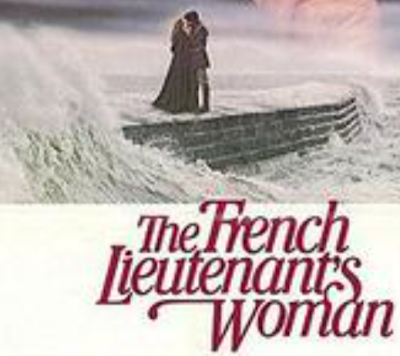 The film intercuts the stories of two romantic affairs. One is within a Victorian period drama involving a gentleman palaeontologist, Charles Smithson, and the complex and troubled Sarah Woodruff, known as "the French Lieutenant's Woman". The other affair is between the actors Mike and Anna, playing the lead roles in a modern filming of the story. In both segments, Jeremy Irons and Meryl Streep play the lead roles.
In the iconic dramatic scene, Charles runs along the Cobb at Lyme Regis to comfort the troubled Sarah as the waves crash over the well-known breakwater. 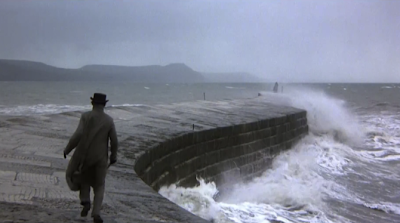 Spoiler alert! This does nothing for Charles' engagement to Ernestina! Now read on.
The Cobb is unchanged! 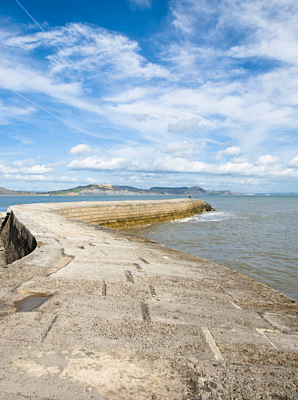 A stylised version features on the front cover of the First Wessex summer timetable book. 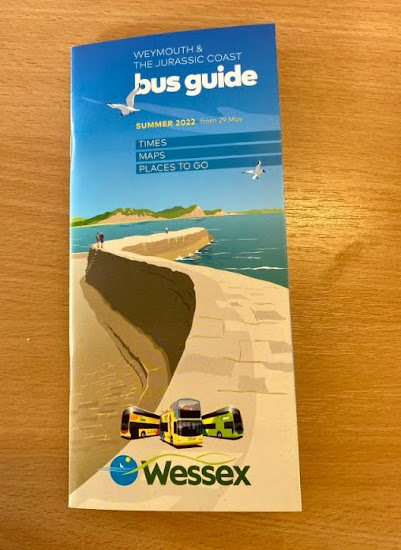 The Harbour, protected by The Cobb, is a complex piece of marine engineering ... 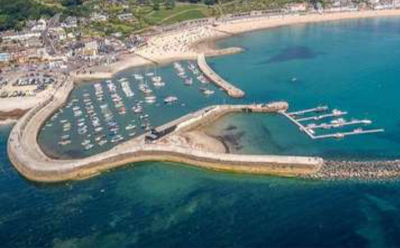 ... with the wave-swept Meryl Streep sticky-out bit lover right on the above aerial view. One delightful feature of the area is Grannies Teeth which we will meet in due course.
But it is the contents of the timetable book that should arouse our interest. As we have come to expect, First Bus has cut back on the former Southern National network that it bought out of post-privatisation management ownership.
All that is left are some Weymouth Town services, the Jurassic Coaster brand and a few odd tendered bits and pieces. The Yeovil area was hived off to Buses of Somerset a few years back.
And so to the timetable book ...
It takes a bit of finding - well hidden in First's oddly complex web site. No mention on the home page ... 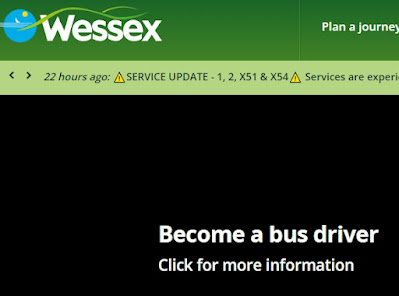 ... and no good searching under timetables ...

... where you get the usual First Bus timetable index. It is really obvious that you would look under "routes and maps" for a timetable book ... 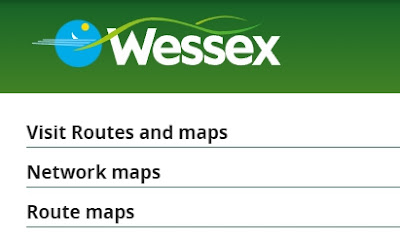 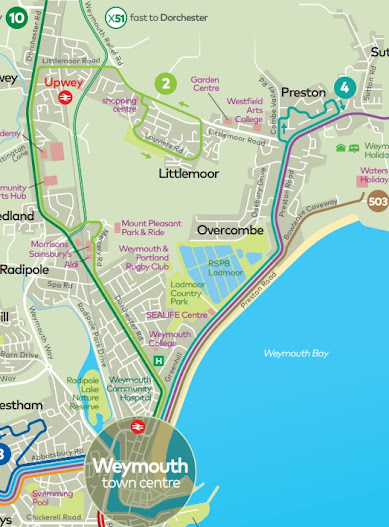 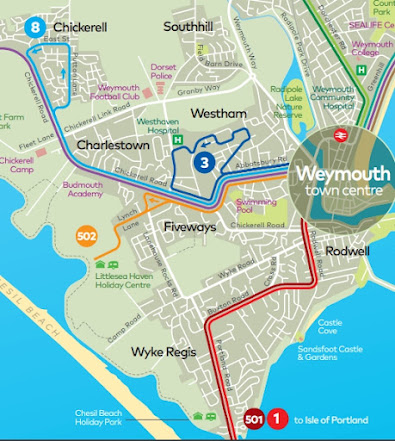 Readers used to fbb's child-like humour may spot Portland Bill, Dorchester and Osmington from yesterday's blog.
As well as town services, we are urged to ... 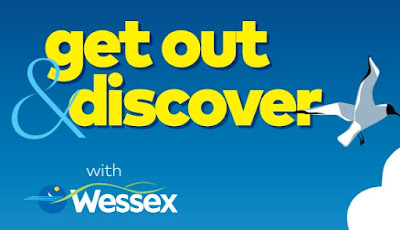 ... availing ourselves of the Jurassic Coaster "network" plus the 501 to Portland Bill. 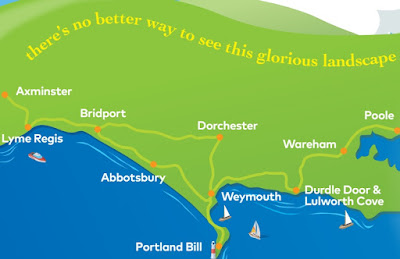 Those with good memories will doubtless remember that the Jurassic Coaster service once ran HOURLY from Exeter to Bournemouth - and long, long ago fbb rode the whole way with a only short PNB at the underground "facilities" on Weymouth sea front. 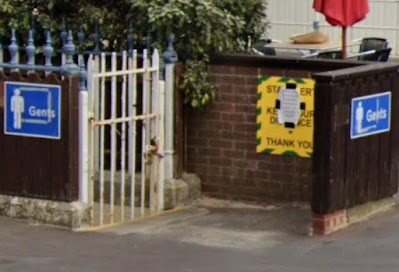 Hope they'll be open for the summer!
Now the links reach only from Axminster to Poole and with no through service without changing. 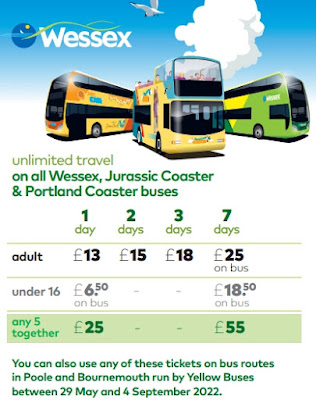 First's day rover fare is painfully whopping; more realistic for a party of five but they have to stay together! The weekly tickets, however, are ludicrously cheap.
But the maps do show the interrelationship between the X51, X52, X53 and X54. 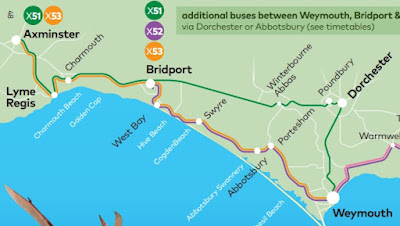 The usual all-year-round X51 and X53 each every two hours (not long ago each was hourly!) are joined by an additional hourly summer only X52 via the picturesque coastal route. 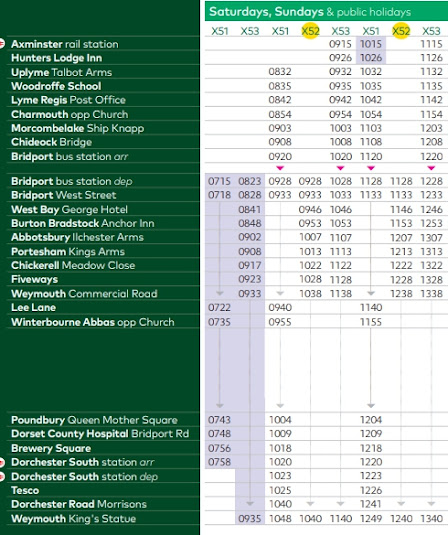 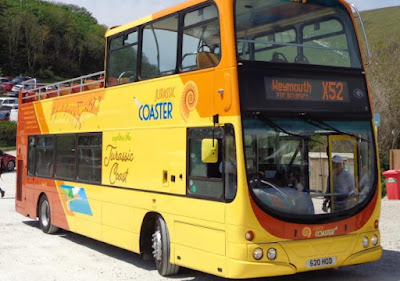 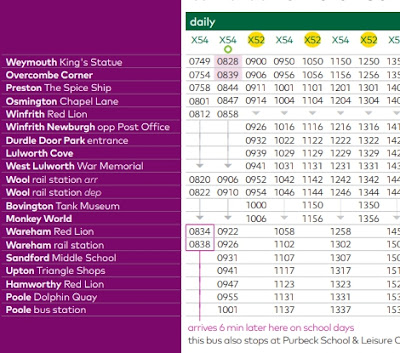 ... to augment the X54 to Poole as far as Wool. Whilst operationally it is a good wheeze to drop in the X52 to double the "tourist" parts of X53 and X54 (who can resist a topless trip to Monkey World?), it might be better to have an additional table showing the X52 in its entirety. It makes a really enjoyable and often sun-drenched ride. 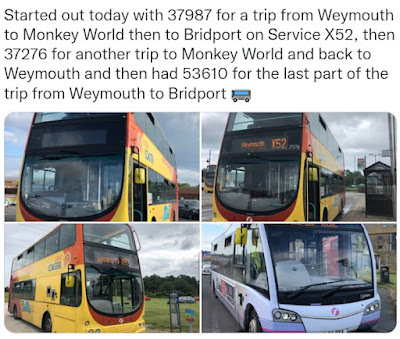 And there are some who would do the round trip twice!
It is worth mentioning that the other good topless trundle from Weymouth is the 501 to Portland Bill. Sadly, the Portland Coaster ... 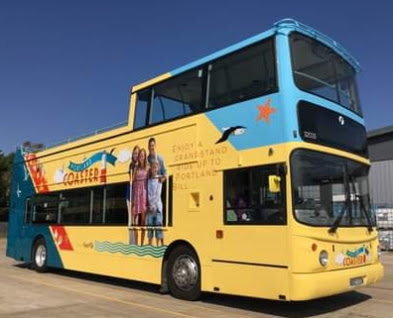 ... seems to have been downgraded by First. Instead of hourly in peak summer it looks as if a paltry four return journeys are all that is available. 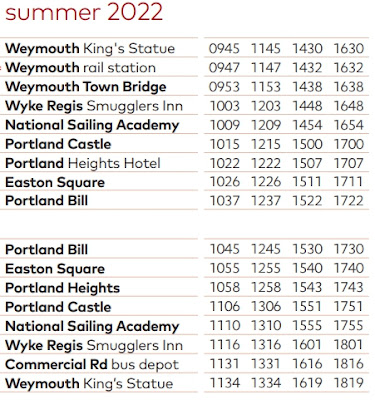 For fbb, the 501 is a much better ride than the X52 because of its wide variety of scenic experiences. There are the remnants of a once thriving quarrying industry, the looming monstrosity of Portland prison, lots of pretty coastal glimpses  with the vista along Chesil Beach being a cracker. 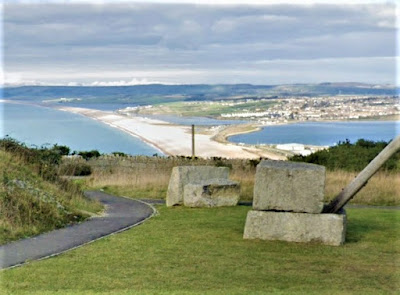 And for something a little different, although not topless, try the Lyme Regis Park and Ride. It goes much further than it used to and is a jolly jaunt in its own right.

It only runs during school holidays, but last season it was always double deck for excellent views, particularly as you descent into and ascend out of Lyme Regis. Keep your eyes open for the Cobb and imagine the drama of that scene. 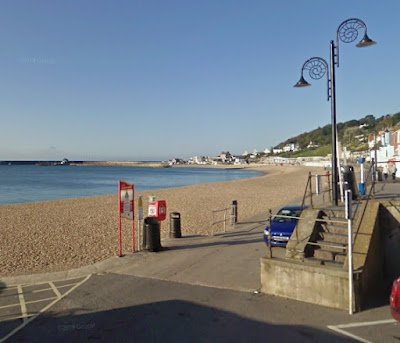 It is a pleasant walk from the main town bus stops.
Splendid.
The timetable book is superbly EXCELLENT and, combined with the pop up enquiry office, should encourage more passengers to ditch the car and take some chauffeur driven rides through magnificent scenery. 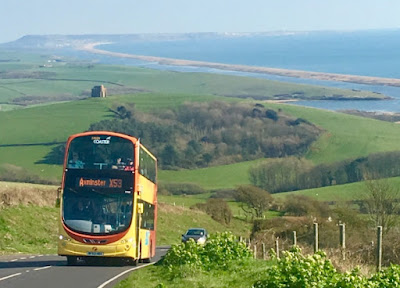 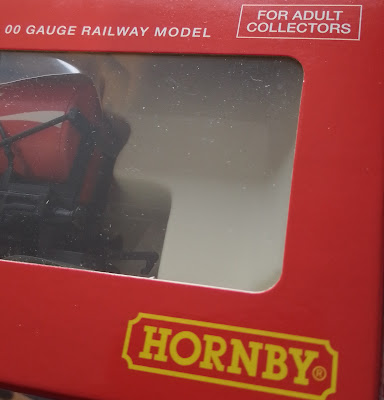 It is what Model Railways are about these days - "for adult collectors". And £20 for yet another wagon which never existed - in several ways.
More tomorrow!
Oh yes; and Grannies Teeth? 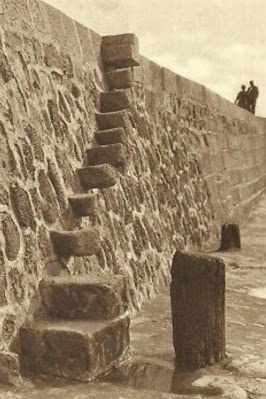 A scary set of steps from the top deck of the Cobb down to the mezzanine level; near lethal if it's wet - which surprisingly it often is! Something to do with the sea being close by?
Next Variety blog : Saturday 14th May
Posted by fatbusbloke at 02:00