More; Or Less Bright?
In April last year, fbb reported on the new railway operating in the USA. 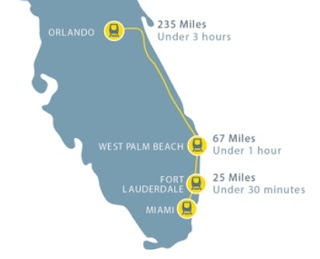 With a lot of new track, new trains and new stations this seemed a spectacular way to generating new commuter and leisure business. 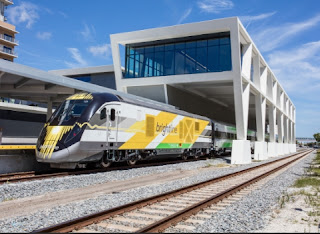 Now comes the news that Virgin is "investing" in this project. Trains will lose their bright Brightline branding in favour of the usual "Virgin".

Brightline  (and its bright colours, different for each train) seemed an excellent statement as to the aims of the company and some commentators are wondering what this change might mean. Is Brightline struggling financially? Will the internationally recognised Virgin brand lead to a growth in business?

Or has the brightness dulled a little?

Say "Ola" to Ola!
As fbb was making use of the excellent "facilities" at Bristol Temple Meads Station, he found himself standing in front of this poster. 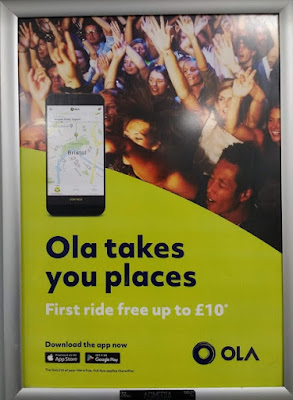 Clearly aimed at young and beautiful people, your old and ugly blogger quickly realised that this was promoting an App-based taxi and/or ride sharing company.

A look at the web site confirmed the style of operation! 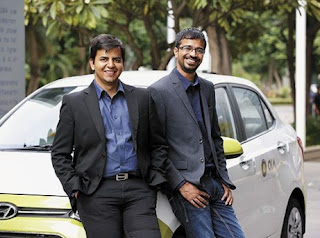 ... Ola is one of the world’s largest rideshare companies. Users across 110+ cities in India and Australia connect with over a million driver-partners across cabs, auto-rickshaws, and taxis, through Ola.

Ola integrates city transportation for customers and driver-partners onto a mobile technology platform ensuring convenient, transparent, and quick service fulfilment. Ola is focused on leveraging the best of technology and building innovative solutions ground-up, that are relevant at a global scale. Notably, in 2016, Ola Play - the world’s first connected car platform for ridesharing - was launched, transforming commuting experiences and setting the tone for global innovation in this space.

Which, being translated, means, "we book car-rides via an App." 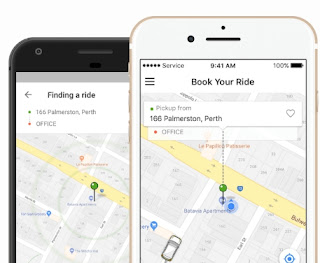 Ola’s partner-focused approach ensures that you get high-quality rides when you travel with Ola. With safety features like SOS alert and real-time location sharing, Ola offers you a stress-free option for ridesharing.

The one noticeable difference is that you can choose the "type" of service as well as your vehicle. 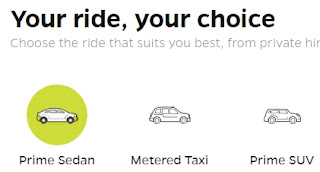 
The only vehicles that fbb saw at the station were "official" taxis all coloured Bristol Blue ... 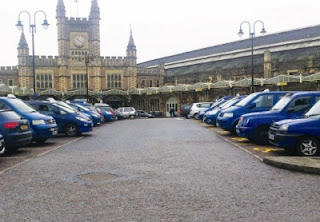 ... so you could not easily tell if any were "Ola metered" vehicles.

It will be interesting to see what happens if (surely "when") Uber and Ola start competing. Should be fun!

Sampling The 73 (and Other Stuff)
One of fbb's plans on lastSaturday's visit to Bristol was to sample the "competition" - namely First's route 73 which hitherto has been the main service to Bradley Stoke. 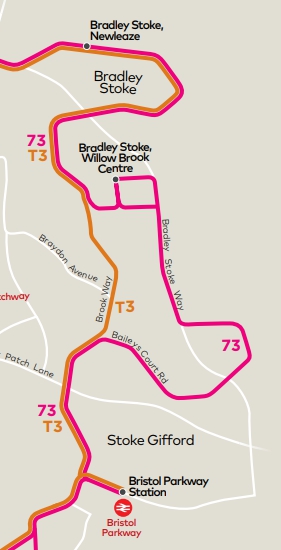 This runs much more to places where people actually live, rather than whizzing straight down the spine road, Bradley Stoke Way. Notably it also serves Parkway Station which the M1 assiduously ( and surely wrongly!) ignores.

It then follows "ordinary" roads into the City whereas the M1 tuns fast and passengerless from UWE into the centre.

From fbb's point of view the 73 also terminates at Temple Meads, so the 1320 from Cribbs Causeway would deliver the chubby one back nicely in time for his return train. After a quick skip to the loo, fbb exited The Mall at 1418 ... 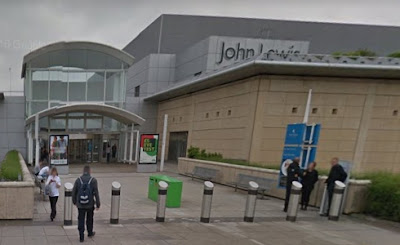 ... only to see his chosen 73 whizz past having left at least two minutes early. Inexcusable! 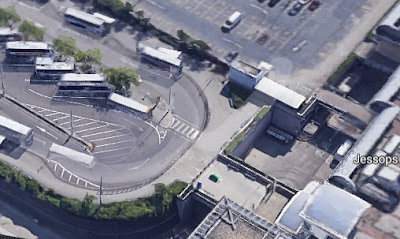 The next 73 would be too risky a connection, so your very frustrated blogger was obliged to use the M1 back into Bristol.

But at least this exposed problem.

Three young men attempted to board at a stop on Bradley Stoke Way; a stop served by M1 and 73. 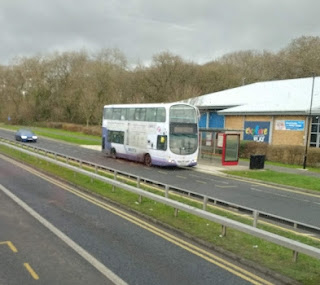 There was no monolith, so no means of their buying their tickets in advance. 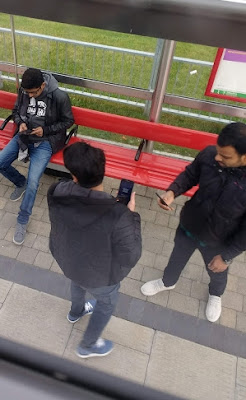 The driver told them that he did not issue tickets (untrue) but they could buy one from the machine across the road (and therefore miss the bus!). True but wrong.

One of the party even proffered a bank card but that was summarily refused. What was mystifying was that all three of the dismissed passengers were ready to proffer something on their mobile phone.

Clearly it was the wrong thing. Some stops bereft of Monoliths have been given this label ... 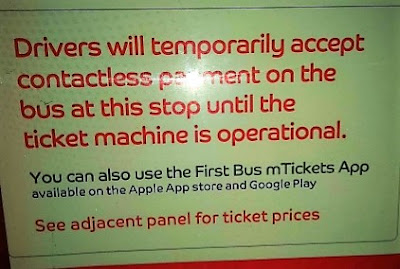 ... but fbb could not confirm or refute whether there was one at this particular location. Either way, the three passengers, still peering for an App (?) on their phones, were left to catch a 73 - or walk.

The fault lies entirely with whichever agency was responsible for NOT installing the monoliths; compounded by the operator(s)' insistence that drivers will not take fares - even if there is no other means of paying. As the system says, "we don't want your money, so push off and walk!"

It was very poor PR.

The M1 is, of course, oddles faster than the 73, so, after a change of bus at Broadmead Penn Street ... 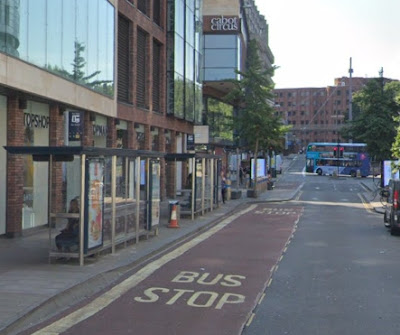 ... fbb was on a frequent service 8 and back at Temple Meads in time to catch an earlier train than scheduled. Joy of joys it was an HST. 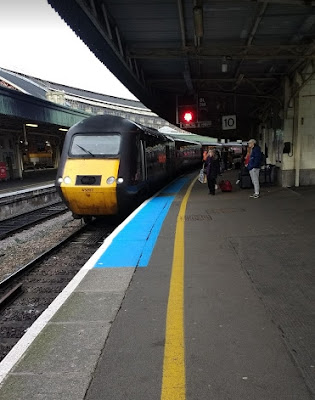 These trains are so superior in every way to a Voyager that travel back to Exeter was pure joy! Thanks Cross Country for making fbb's day! He celebrated with a cuppa and a packet of Cheddars - yummy yummy. 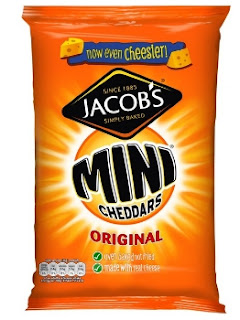 Can anyone explain what that blue painted panel is for - on the platform edge at Temple Meads?

It is from the Railroad range, so will lack some fine detail - but ... 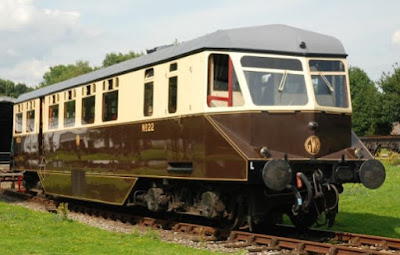 
Next Map blog : Tuesday 22nd January
Posted by fatbusbloke at 02:00