One of the frustrations of exploring the first year's route and brand developments by Rosso (Rossendale Transport) under Transdev ownership is the quality of their network map. We have already seen in various blogs that the Red4 route does not appear. 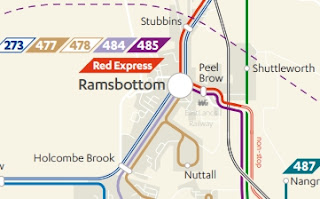 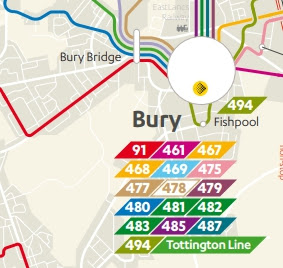 ... or anywhere else, for that matter. TfGM's timetable library also has a 484 running between Bury and Ramsbottom every 15 minutes ...

... at similar times to the Red4 but with journeys continuing to Accrington. Meanwhile Traveline admits to the Red4 and changes you on to an X41 (Blackburn Bus Company) at Rammy. 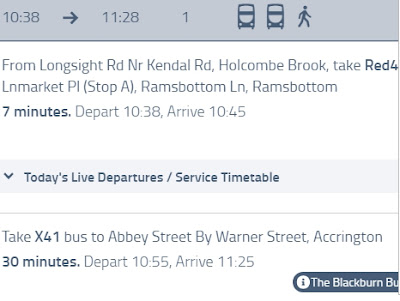 The company's timetable reveals that the X41 is branded "Red Express" ... 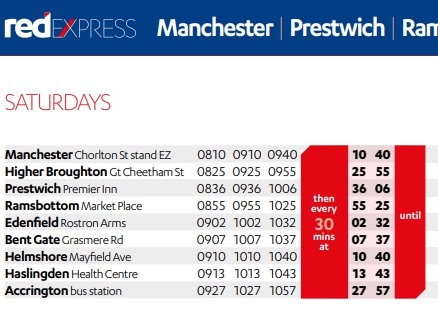 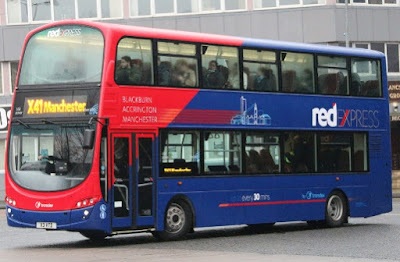 ... but Rosso's map shows no route number at all. 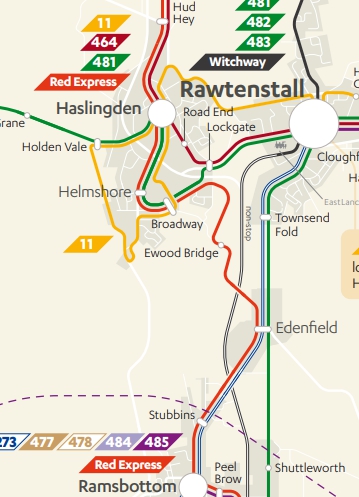 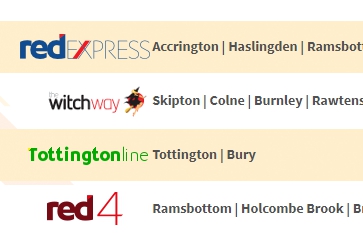 Today and tomorrow new timetables, new brands and new route numbers are introduced. Can we expect a new map from Rosso FROM TODAY?

Yet again, in this crazy industry, the task of updating web sites has a low priority. Surely the new map should be published WITH the news of timetable updates and it should be in the correct "on-line" place from day one of the changes.

But it is all on-line! NOT.

Have a look for yourselves.

Oh yes, and where are the timetables for Valley Line, 1, 6 and 7 at Accrington on the Rosso site? 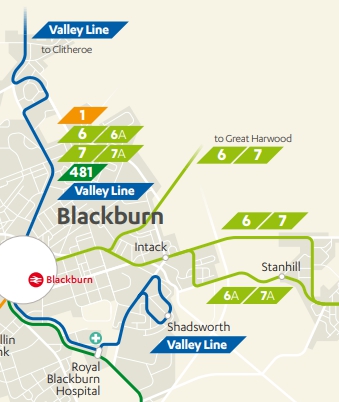 They are on the Rosso network map but without timetable or explanation.

In view of the company's amazing publicity and amazing presence on the Twit sites, the poor standard of the network map is ...

MetroBus Map Mystery
There was considerable public angst when bits of the proposed Metrobus network in Bristol disappeared from the maps. 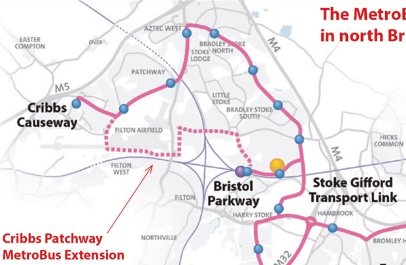 Thelink from the M1 route to Parkway Station was deleted- surely a bad mistake. Likewise the South Bristol Link from Long Ashton to Hengrove Park ... 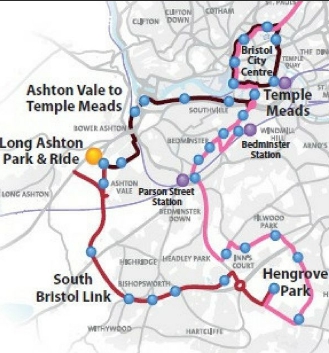 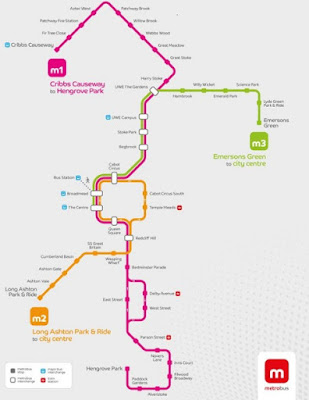 This left the basic three route network as above ... 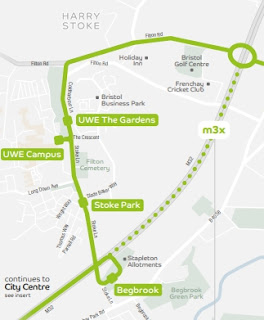 ... to which "peak flow" M3X journeys omitting UWE have since been added.

But both of the deleted options have now resurfaced on the latest network map on line and at M1 stops. 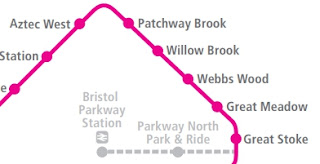 A decision to abandon a new Park and Ride site on the M32 might mean some developments at Parkway. Likewise the other major deletion has re-appeared.

A special road had been built just for that missing MetroBus route, with bus stops erected along the link.

But First Bus has now indicated they will be willing to take it on, subject to agreement with MetroBus.

A spokesman added: “First has had meetings with Karin Smyth MP and West of England Combined Authority mayor Tim Bowles, and was asked to consider a possible solution to better utilise the investment in the South Bristol Link road.

“We’ve subsequently provided an outline proposal to WECA and we continue to engage with all parties involved towards a solution which will benefit residents of South Bristol.

“We are in the very early stages of a process which will take time, and we are committed to the development of MetroBus and capitalising on the one of the biggest public transport investments that this part of the country has seen.”

MetroBus had previously said the route, known as the M5, will only go ahead if thousands of homes were built in the area. 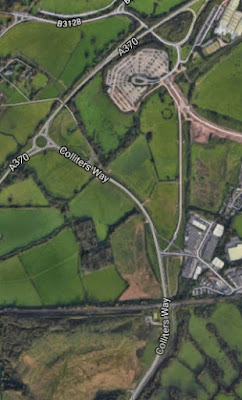 ... but is equipped with unused bus lanes and bus stops. 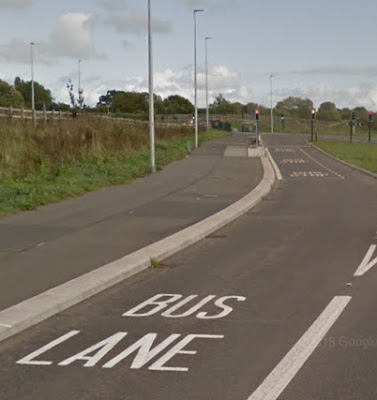 The bus only link from Colliers Way to the Park and Ride is also in place and unused! 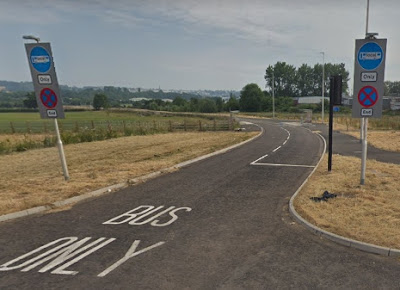 What the route lacks currently is any significant source of potential passengers!

The Wonders of Technology No 145
Santander (you will all enjoy our on-line banking services) have been in touch with the fbbs in a letter (remember them?) addressed to their Seaton hereditament. 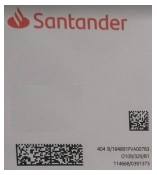 The gist of the epistle was to extol the inestimable virtues of their on-line services and to announce the closure of their local branch.

To illustrate the huge benefits of their reliable computerised system, the closure notice was for the fbb's local branch ...

The fbbs have not lived there (or used that address) for about six years.

You are bound to ask, "can you trust the bank with your money?"

Alex Hornby is on Holiday
The Ross of Bosso Bus is twittering about his holiday, just begun. 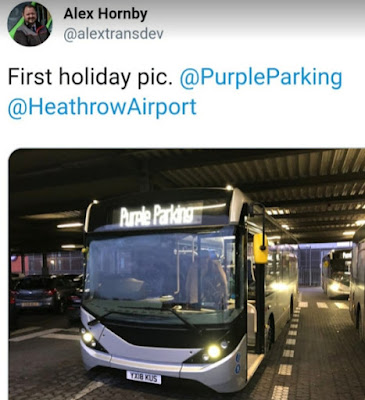 The piccy is of the bus that took young Alex from the parking lot to hs plane at Heathrow. Smart bus!

But surely he ought to have gone there on a bus. Public transport, as he may well aver, is amazing!

He seems to have used plenty when he arrived. 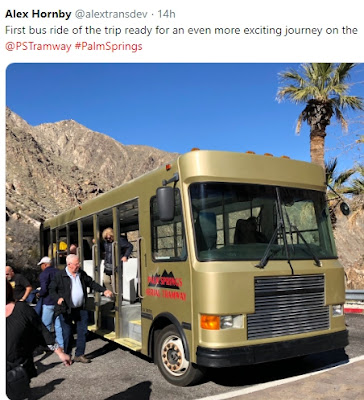 PSTramway is Palm Springs Tramway. It's a cable car! 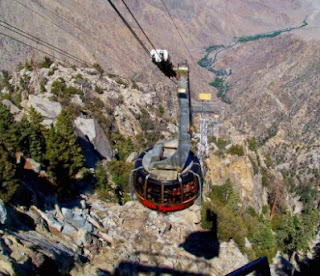 And Back to Normality
One of Rosso's pics pf their new brand "Trax" which fbb forgot to post yesterday. 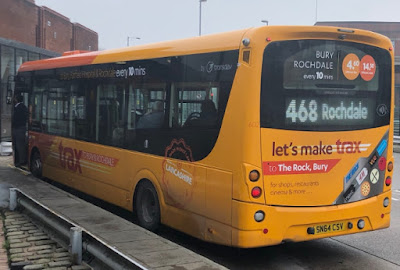