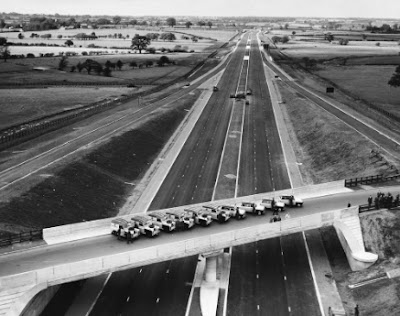 It has changed a bit since 1959!! But this is a different M1, Bristol's metrobus M1 which started on Sunday 6th January making Saturday 12th the first Saturday of operation.

And creaky old fbb was there!

A quick (?) sprint across the footbridge to join the 0745 Cross Country to Brizzle in the Drizzle. An unadvertised connection; and another good reason for using timetables, not journey planners. Of course fbb was prepared for the connection to fail, but it usually doesn't. 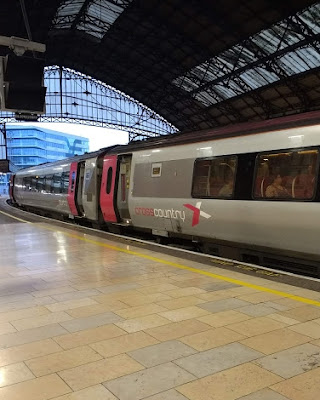 Four cars-worth of Cross Country's finest (!), lightly loaded with no trolley as the "operative had called in sick".

On arrival, plenty of time to enjoy (?) the appallingly bad publicity for buses in the station. 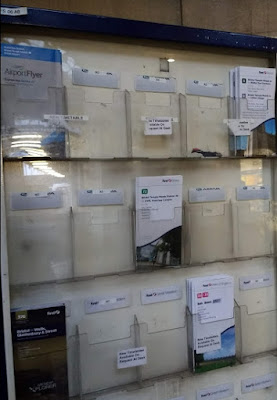 There are directions, once outside the concourse, to buses which leave from the approach road (8/9, 73, Airport Flyer) but no guidance as to what or where stops might be on the main road, Temple Gate. What is needed is a local Temple Meads map and a full set of leaflets in the rack.

People might think of using the bus - but that would never do, would it?

Despite this lack of help, fbb found the stop and was, frankly, impressed; well impressed a bit. 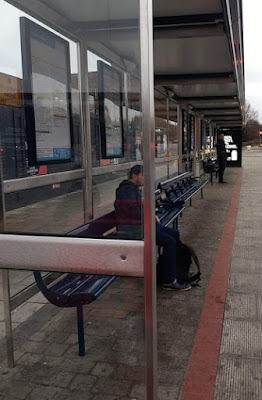 There were plenty of real seats, not those awful bum-bending perch things, and the departure lists we re clear and fresh and, more importantly up-to-date. As we come to expect, there was no network map and no timetables although there were two big frames which could have been used. As a minimum, the "country" services should show a full timetable, even if a frequency guide is OK for busy city routes.

There was an electronic display which only showed three departures, with a fourth alternating in position 3; not enough for a busy stop. 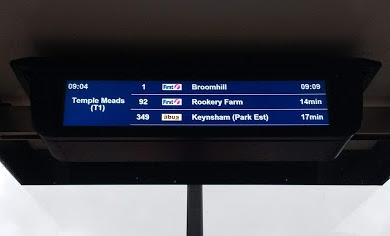 fbb has never understood why these things are in "time" order. Surely they should show every route that stops there in route number order with the next available departure/departures alongside each. Much more useful.

fbb wanted the 0918 service 92 to Rookery Farm, replacement for the 50 and the withdrawn service 2A. He intended to join the M1 at Hengrove Park, its southern terminus. 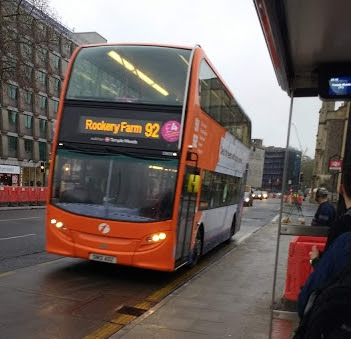 fbb was impressed that all the 91s and 92s that he saw were in the correct livery, adapted from that borne by predecessor routes 50 and 51.

fbb guesses that they are the same vehicles with a new bit of sticky-backed plastic covering the expired detail. Well done First!

As you would expect, the outward journey at 0918 on a Saturday morning was lightly loaded and fbb enjoyed a solo top deck front comfy seat.

What was less enjoyable, however, was the poor state of the bus stop flags. Presumably the bus companies have abandoned their obvious responsibility to present themselves favourably and chickened out by allowing Travelwest (a "consortium") to not do it properly.

The flag at the Temple Meads stop ... 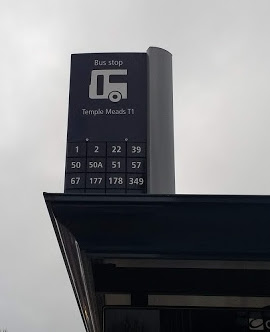 ... had not been updated; and round the route all others were in poor condition with faded and out-of-date route numbers. 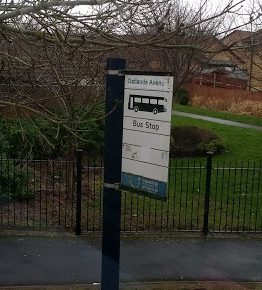 The above was one of the better ones.

As fbb enjoyed the gyrations round the various estates at Whitchurch and Rookery Farm ... 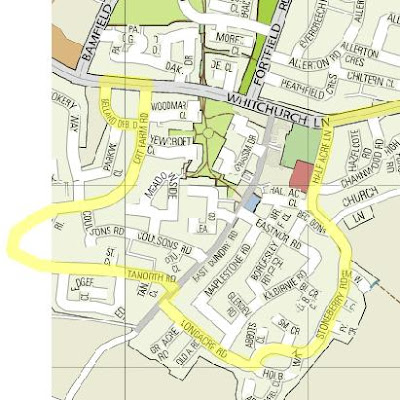 ... (which are far more confusing than they appear on the map!) he suddenly realised that he had made a ghastly mistake. His aim was to ride to the South Bristol Community Hospital ... 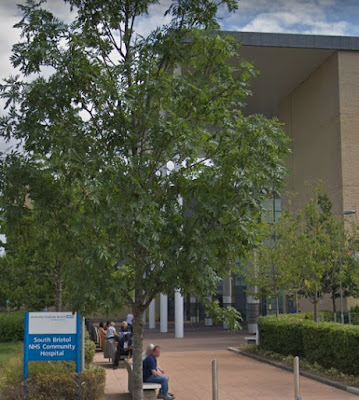 ...and join the M1 at its southern terminus.

But the 92 does not go there all the time! It is extended off peak on Monday to Friday ...

... presumably to get outpatients to the hospital. There are a few journeys on Saturday (but NOT fbb's!) ...

... and none on Sundays; which makes the route map on the otherwise excellent leaflet ... 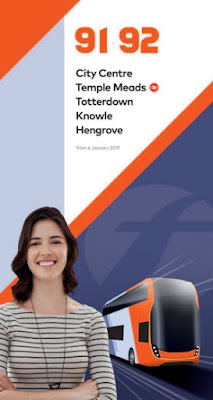 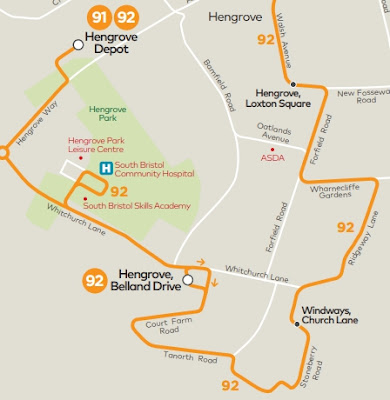 fbb offers an alternative presentation, but the extended 92 is actually quite difficult to explain. 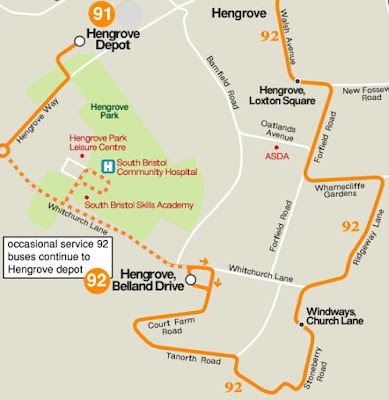 But fbb was turfed out at the Belland Drive terminus ... 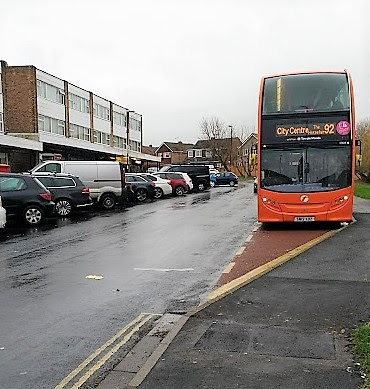 ... facing a lengthy stroll in the drizzle along Whitchurch Lane. But, awaked by the murk, he did manage to get his brain back into its usual slick efficiency (??) and realised that just across the greenery behind the trees ... 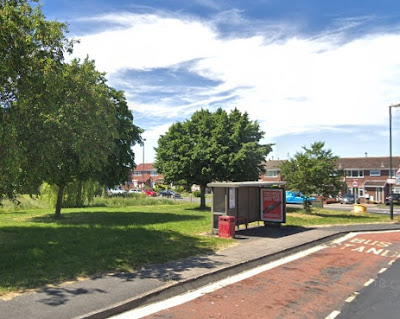 ... is the road called Bamfield - and along Bamfield runs the M1 on its way to/from the hospital - fbb did not need to endure the drizzle, he could catch a bus!

So to your chubby blogger's first encounter with a Metrobus M1 stop out "in the sticks". 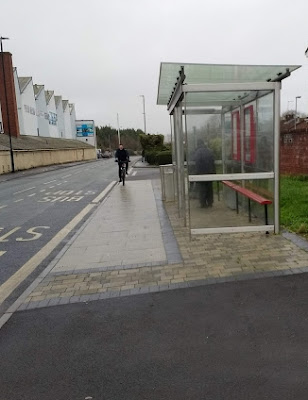 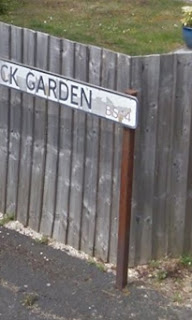 ... and it is the last stop before the terminus. There is no Monolith, so no real time information and no means of buying a ticket; possibly understandable if you are only looking at the M1 and single journeys. The ticket purchase can be resolved by crossing the road ... 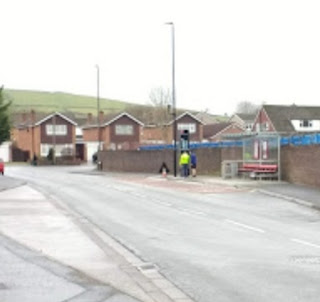 ... where two rookie Rookery residents were doing some on-the-job self education in the black arts of off-bus ticketing. They missed the next bus! The M3 to Emersons Green has Monoliths at EVERY stop.

For the record, there is another bus that uses Bamfield and calls at Paddock Garden(s). 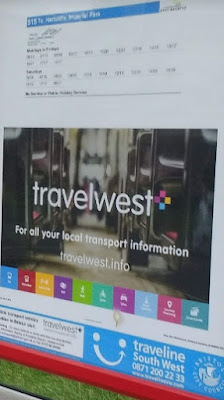 The 515 is operated by Bristol Community Transport ... 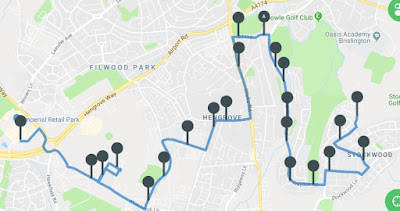 ... ironically the same outfit that is running the M1 under contract to First Bus.  The 515 will also feature in tomorrow's blog!

So fbb boards his very first pink-bits bus for the short ride to the terminus. After a long-ish trek on the 92, there was a growing need for a PNB - and, at just after 1000, surely it was time for coffee?