No 3 son has been a bit of a slacker recently, having not sent any puzzle pictures of Basel to titillate the old man's brain cells. (and boy, do they need some titillation!). But sons paid a state visit to fbb mansions at the weekend for Mrs fbb's 74th birthday. Yes, fbb married the older woman; his 74th is not due until the end of Feb!

"I took a puzzle picture for you in Mulhouse," announced the lad, "but I forgot to send it. I will send it now." 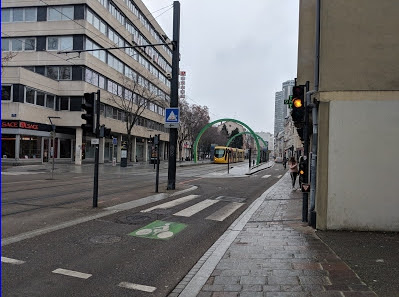 fbb did not know that Mullhouse (Mull-ooze) had trams, so it was worth investigating further.

The town is in France, but close to the border with Germany ... 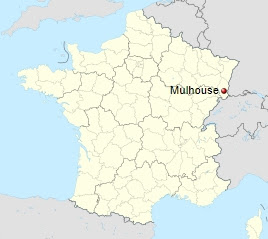 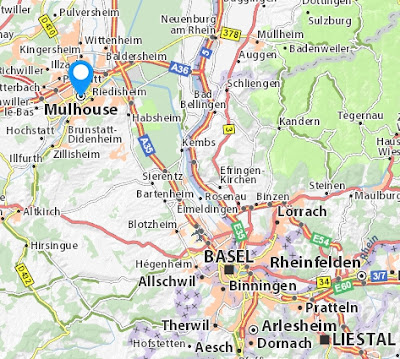 At various stages in its history, the town has been in The Holy Roman Empire, Germany, Switzerland and finally in France post WW2. Historically it was a textile town, sometimes dubbed France's Manchester, but now features a wide range of industrial operations.

From a transport perspective it has a railway museum ... 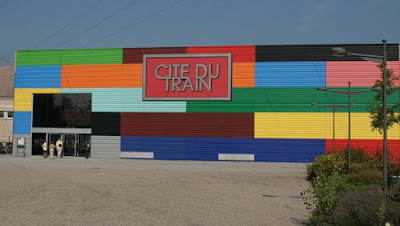 ... smaller (and less visited) than York but packed with good things. 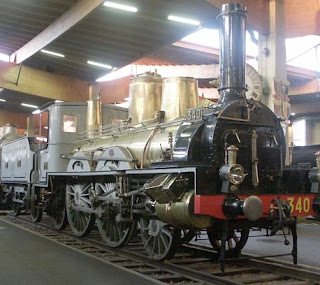 There is a magnificent Motor Museum ... 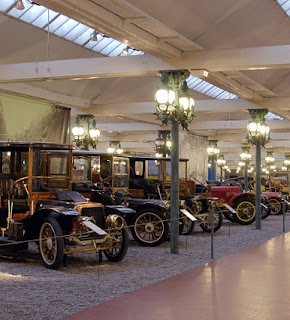 Greater Mulhouse has a population similar to Derby (and, similarly, once hosted a major locomotive works) but, unlike Derby, it has trams, hence the puzzle picture. 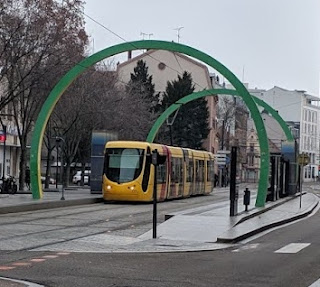 The building in No 3 son's snap was labelled "Alsace", but as Mulhouse is a major town in the Alsace region of France ... 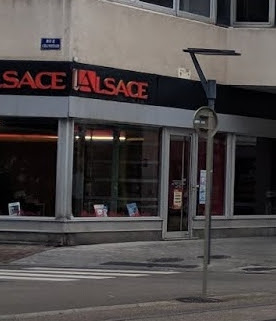 ... it wasn't obviously helpful. The blue-plaque street name was illegible!

In fact, the whole building was more fully labelled, a clue which fbb studiously failed to spot ...

... namely the sign on the face of the building, "Journal L'Alsace". This would have also been no help because the address given on-line (Rue du Thann) was not where the tram was. 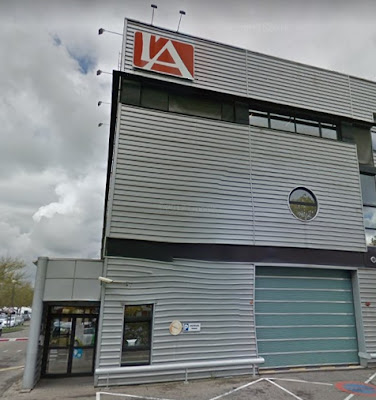 But what about the tower in the background? 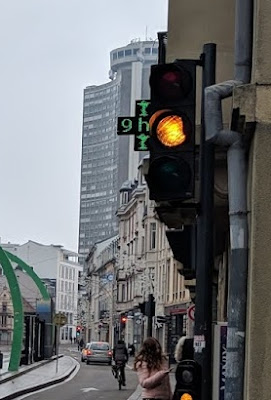 Entering "tall tower in Mulhouse" into the dreaded Google threw up some pictures of assorted tall buildings, one being spot on correct. 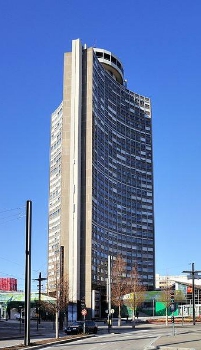 On the top of this apartment block is a flying saucer landing pad ... 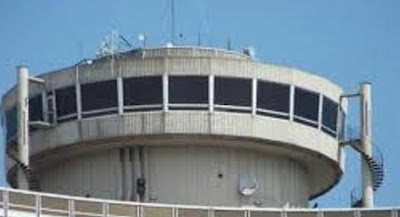 ... actually a posh (but non-rotating) restaurant with wonderful views. 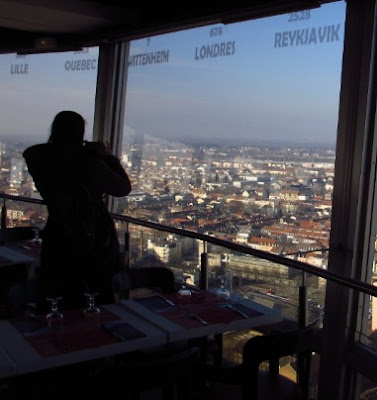 No 3 son and a chum were enjoying a trip by train from Basel to Mulhouse which involved tackling the SNCF bit of Basel Hauptbahnhof. Until fairly recently it was straightforward. The "French" platforms were accessed by a corridor from the main (Swiss Railway) concourse. 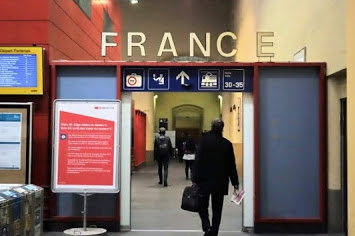 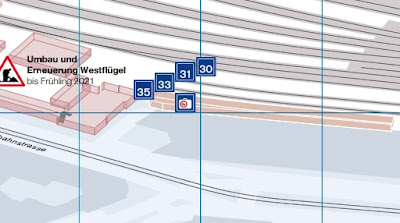 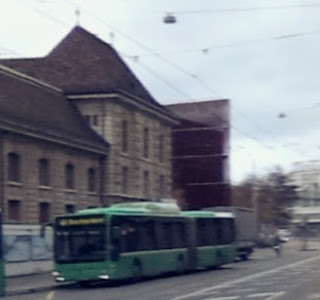 ... and down a creepy ramp (between the old and new buildings shown fuzzily above) near to the underground car park access. 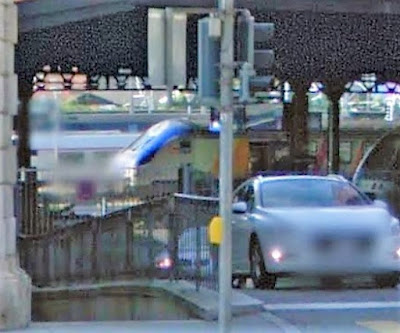 At the platform are the lavish ticket buying facilities ...

... viz a ticket machine! SNCF haven't quite grasped touch screen technology yet; so info and buying access is via a wheel (to turn) and a button in the middle (to press). So you can "scroll" a pointer up and down only then "select" by pressing the button - high tech indeed! 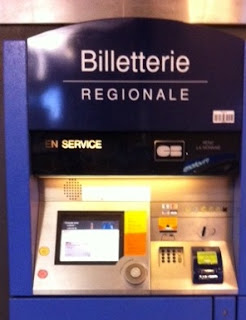 Payment is by card only; argent non accepté!

No 3 son and chum needed the help of an American tourist to guide them through the tortuous process! But soon they were on board their train via St Louis to Mulhouse. 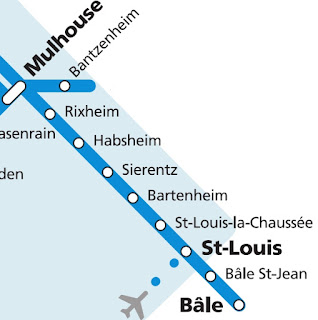 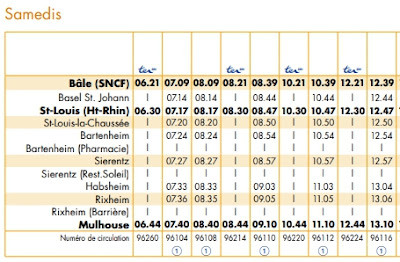 And outside the arrival station you find, not surprisingly, trams and buses ready for your onward journey. 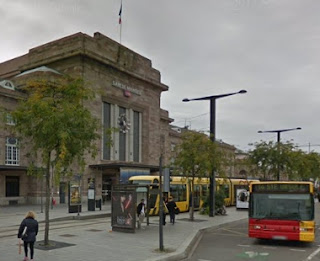 You would expect nothing less!

And that puzzle picture. It is at the Mairie (Town Hall) stop on Avenue de President Kennedy. 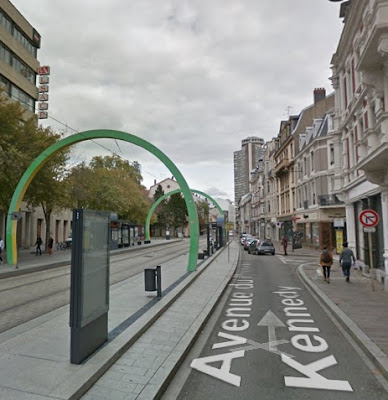 The tram (enlarged horrendously) was on route 3. 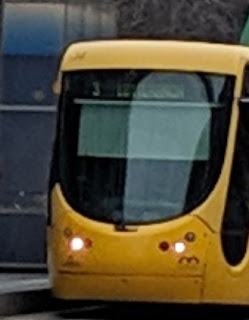 More from Mulhouse on the Morrow.


Next Magnificent blog : Tuesday 29th January
Posted by fatbusbloke at 02:00