This blog has recorded some of the problems faced, in recent months, by First Bus in Bristol where a combination of critical staff shortages and horrendous traffic congestion have led to huge reliability problems and public dissatisfaction.

Things are getting better with additional staff being trained and back-up bods being bussed in from elsewhere in the group. In this week's staff newsletter (and in James Freeman's absence) we are told that improvements are working - BUT Christmas shopping is in full swing so the company is not "out of the woods yet".

The stand-in editor hints at "improvements" on some of the worst performing routes. 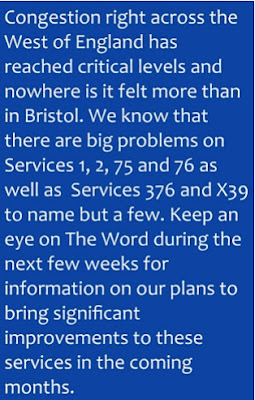 Let hope the "improvements" are not the same as were brought in by Sheffield Supertram some months back where the public was overjoyed to learn of a better service running every 12 minutes rather than every 10!

Bother In Bristol (2)
This rather lurid headline greeted readers of the local on-line rag a week or so ago. 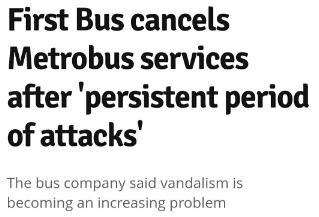 It wasn't quite as bad as the headline might have suggested - but bad enough.

Three buses were damaged by vandals (local kiddies having a bit of harmless fun!!!!) on one evening. Repairs were undertaken but not finished in time for the following morning's peak timetable; hence:- 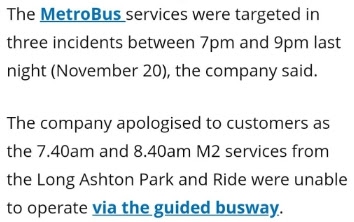 Vandalism is difficult to combat because, by definition, it is unpredictable. It is, sadly, a feature of our 21st century broken society and presents yet another problem for bus managers.

And Back In Sheffield.
How's this for a piece of considerate customer service> 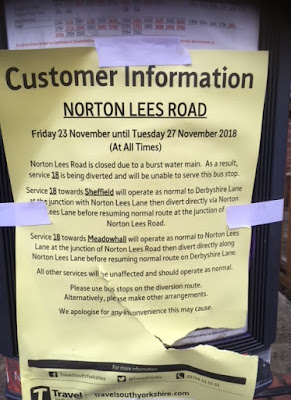 After the flimsy notices for the service 97/8 disruption in flimsy plastic pockets tied on the bus stop poles with flimsy string comes the above. 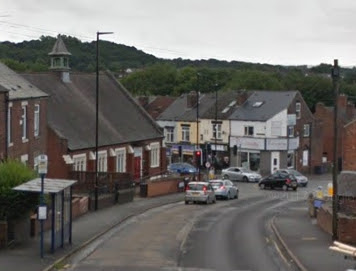 ... at the bottom  of Scarsldale Road Woodseats. A map will show what had happened. 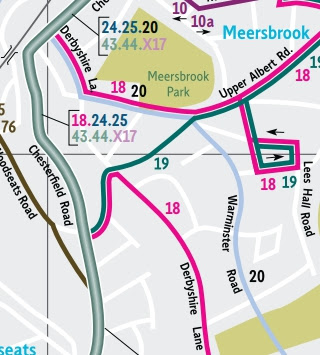 Under a recent "revision", service 18 (PINK) was changed to run down Scarsdale Road, right into Chesterfield Road, back up Derbyshire Lane then via Norton Lees Road (passing Meersbrook Park) before trundling off via Meersbrook to the city centre.

But with Norton Lees Road closed by a burst water main, it could not do that!

Instead, the hourly service followed the 19 (MUD BLUE) route missing our the Chesterfield Road wiggle completely. That is a major inconvenience for shoppers (the main reason the 18 goes that way) and a minor inconvenience for anyone want to get to Norton Lees Road on the pink line.

Service 20 (PALE BLUE) every 20 minutes was diverted via Chesterfield Road and up Scarsdale Road., again depriving folk of their link to the shops.

Needs must, you may say; burst mains can have a disastrous effect on the road surface ... 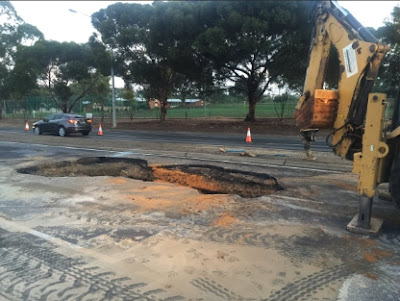 ... and losing a bus and its passengers down a massive sink hole would, surely, be bad PR for First Bus?

But two questions spring to mind.

Does it really take from Friday 24th to Tuesday 27th to mend a pipe and fill the hole? If it does, it shouldn't!

And then ... here is a press headline about a burst water main on Norton Lees Road. 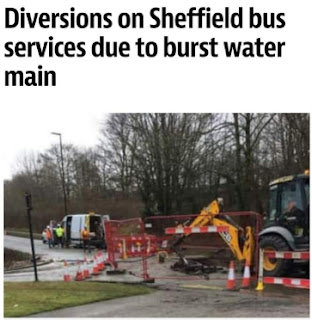 It looks quite bad.

But it happened back in March.

Is there something radically wrong with the water supply on Norton Lees Road? Why has the problem not been solved.

But thanks, PTE for the good advice.

What "other arrangements" do you suggest?

If you do manage to make it up the steep hills without falling into the slough of despond, "Bishops House" in Meersbrook Park is well worth a visit. fbb never did!

Bishops' House is a half-timbered house in the Norton Lees district of the City of Sheffield, England. It was built c. 1500 and is located on the southern tip of Meersbrook Park. It is one of the three surviving timber-framed houses in the city (the others being the Old Queen's Head and Broom Hall).

It is known as Bishops' House because it was said to have been built for two brothers, John and Geoffrey Blythe, both of whom became Bishops. There is, however, no evidence that they ever lived in this house - the first known resident is William Blythe, a farmer and scythe manufacturer, who was living here in 1627.

The "Not The Bishops House"?

fbb Has Switched!
Or, more correctly, is in the process of switching.

After annual battles with N-Power who, every autumn, decided on double fbb's monthly direct debit for not good reason, the old man was simply too fed up with the system for a fight.

One deciding factor was the response from the N-Power "team". fbb asked (last year and inthe previous three years) how they could justify such increases, the man suggested that the fbb's "might be watching more television".

Snorts of derision! A modern TV uses a negligible amount of juice thus illustrating the appallingly bad management at N-Power.

Welcome "Bulb" who quoted £99 based on just a postcode. Close enough for a starter and a lot less than £150.

But these newer suppliers are a bit to chatty for fbb's liking. 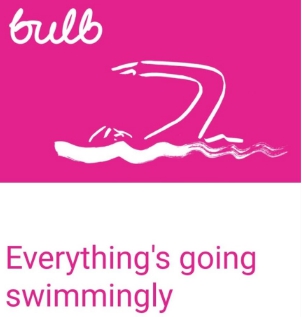 Time will tell. But they will "see you next week". That must be really interesting technology!

There have been heart-rending offers from N-Power of a "fixed tariff" (which is what fbb was on, anyway) and, stunningly, a promise to plant two trees if fbb stayed with them.

You can just imagine the tears streaming down the cheeks of the N-Power executives as they wave goodbye to fbb's business.

AND the old crusty gets £50 for joining.

Going up in the world blog : Thursday 29th November
Posted by fatbusbloke at 02:00