Deck The Halls ... Part The First

Residents of Northamptonshire and over the Warwickshire border in the Rugby area are invited to join fbb in a not-so-jolly Christmas Carol. All together now ...

To bring festive cheer to their customers, Uncle Brian's lads have announced their "service revisions" for the new year, so all can enjoy the anticipation as they chomp on their turkey and trimmings.


Of course, times are tough for bus companies. Their businesses are, frankly, struggling thus making the shareholders grumpy. There's nothing wrong with wanting to keep your shareholders happy; after all it is their money that finances the business and they are entitled to expect a modicum of interest and/or capital growth for the risk they have taken.

To what extent the loss of passengers is the result of continual cut-backs and above inflation fares increases to keep the shareholders (the grey men of the Stock exchange in particular) in eternal joy and bliss is debatable. fbb learned of the Law of Diminishing Returns in his "A" level economics lessons from Mr Harris.

Although that nice Theresa would love to reduce congestion, emissions and stress by getting us all to use public transport, her penny bank is nearly empty and what small change is left will be needed to pay johnny foreigner to give us permission to leave "Le Club d'Europe"!

To understand the changes and their consequences fbb will need some maps of the new network AND the timetables, but these are not yet forthcoming, so this blog will adumbrate the more spectacular cut-backs. 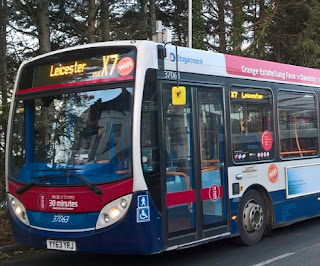 Note the Daventry brtanding on the picture above! The half hourly not-very-X 7 becomes hourly. 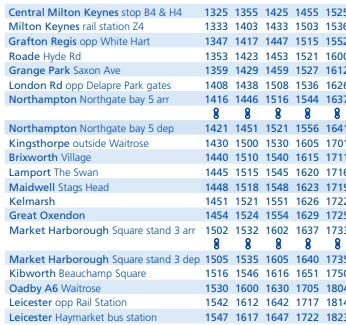 We are promised extra buses between Market Harborough and Leicester and between Northampton and Brixworth "at most times of day" but as yet these "most times" are unspecified.

Between MK and Northampton we are promised a new X6 which looks like it will be even less X by filling in for some withdrawn Northampton town services. 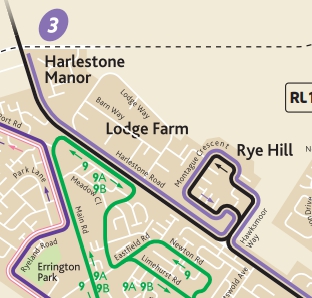 ... reducing the Harlestone Road frequency by half. Bearable, perhaps, but much less bearable is at the other end of the route ... 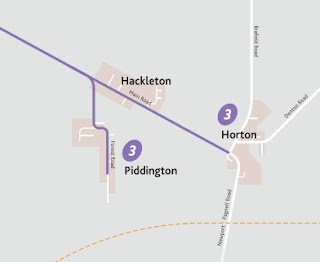 ... with buses running almost to the far end of the village ... 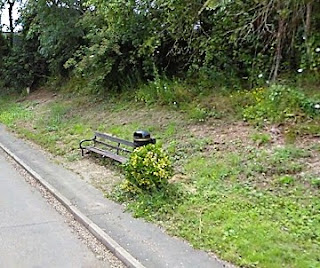 ... and turning at Salcey Rise with its lavish passenger appurtenances, is by no means a hamlet - neither are the other two denuded communities. You would have thought some sort of service could at least cover its operating costs. Apparently not. 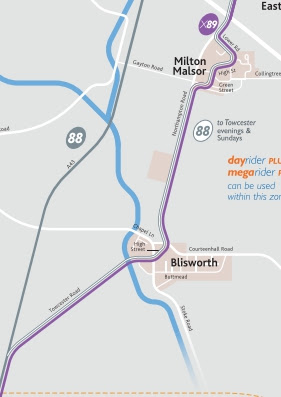 ... is withdrawn completely reducing the service to Towcester to every hour. Likewise Towcester to Milton Keynes is left with just the hourly X91. The 88 is diverted via Milton Malsor and Blisworth as a replacement but ... 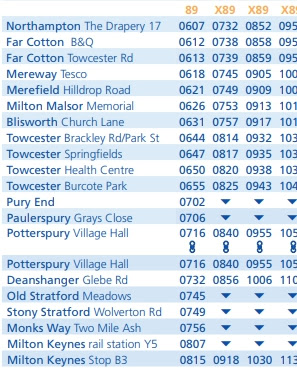 ... the villages of Pury End, Paulerspury, Potterspury and Deanshanger lose their service. No replacement is planned as Northamptonshire is as much "dans la merde" financially as Auntie Theresa.

It goes on and on. The bus service from Moulton, a significant residential area and former village ... 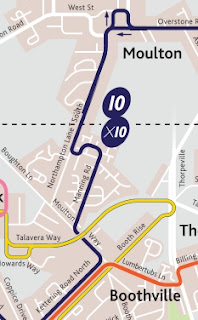 ... will lose its "local" hourly service 10 to the town, just leaving the hourly X10 which has trundled all the way from Kettering. It is also being diverted to replace a just part of a town service running every 30 minutes.

Arguable, Rugby fares just as badly. Service 64 (DARK BROWN in the map below) to Leamington Spa is withdrawn completely ... 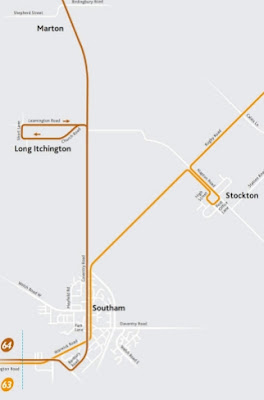 ... depriving villages Like Marton and the gorgeously named Long Itchington ... 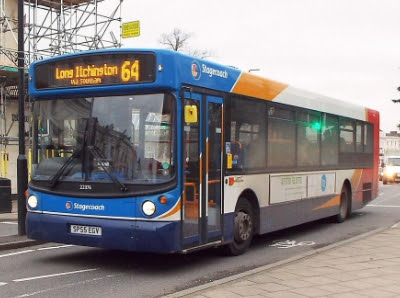 ... of their important links. 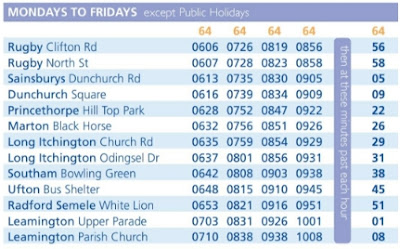 Buses on the associated route 63 (ORANGE on the map) will remain to cover Rugby to Dunchurch and Southam to Leamington Spa but, obviously, at half the frequency.

D4 from Rugby to Long Buckby is withdrawn completely ...

In this form the service has not been around for long, so it was either a simple failure OR, more likely, some "Section 106" funding from a developer came to an end. Note that it gave an hourly service to Long Buckby railway station.

Also withdrawn from its double run from town to station is service 96 (Northampton to Rugby). 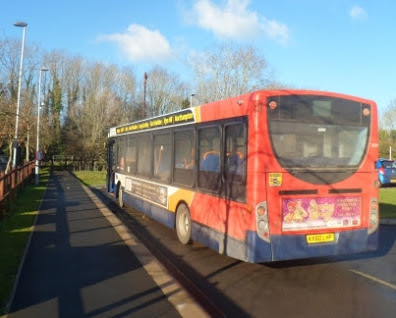 The 96 (above) is seen waiting at the "interchange stop" where, on a recent visit, correspondent Alan found no bus stop sign, no shelter, no timetable frame and no timetables in the ticket office.

Now you do wonder why people didn't use it OR the D4. It is such a mystery.

The above is just a sample of the more obvious withdrawals. Every town served by Stagecoach is having its service pattern "revised" and fbb has only found one service that has an improved frequency.

Of course, when local authorities had money, they would tender for replacements and the incumbent might face a newcomer who, emboldened by his tender "prize" might well try a bit on competition elsewhere. Prudent operators were often prepared to sustain a lower margin to protect their whole network.

But with empty Local Authority pockets there is no chance of any intruder, so it is a risk free short back and sides.

There will be more from the Stagecoach changes in due course.

And, Talking Of New Trains ...
A snippet from Alan concerning the Gospel Oak to Barking line in London. 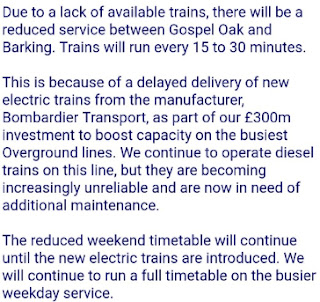 i.e. were frantically mending the old ones at the weekend.

So what is wrong with the shiny new class 710s? 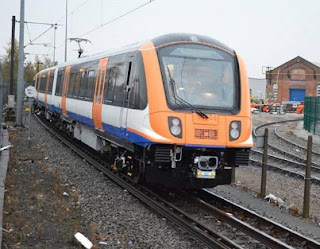 A further thought from Alan.

Ah, the electric is not finished yet? Now that could make running the new trains a tad on the tricky side!