How Much For Paddington?

Not the station - it is not for sale - yet! Or the bear, although copies are easy to obtain at a wide variety of prices. fbb refers to the souvenir 50p piece recently introduced to commemorate the little Peruvian Bear' 60th Birthday. 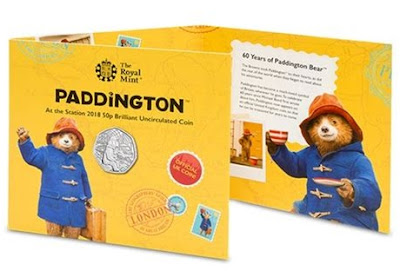 The answer should be 50p and you might just find one in your small change. In 1969 the larger 50p coin replaced the ten bob note and it certainly wasn't small change back then.

Today the Royal Mint will sell you an uncirculated Paddington 50p  ... 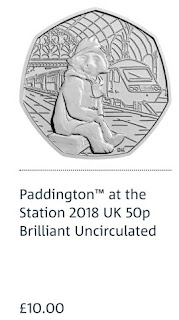 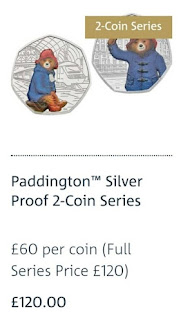 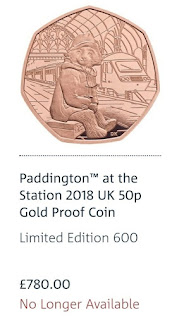 At a historic 60 years ago, however, should the South American immigrant be pictured with an HST (High Speed Train)?

The British Rail Class 43 (HST) is the TOPS classification used for the InterCity 125 High Speed Train (formerly classes 253 and 254) power cars, built by British Rail Engineering Limited from 1975 to 1982. The class is officially the fastest diesel locomotive in the world, with an absolute maximum speed of 148 mph.

fbb is trying to work out which politician has similar facial characteristics to the famous bear. 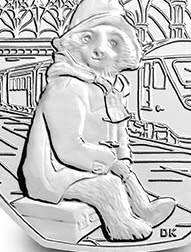 Oddly At Rugby
Snapped by Northampton correspondent Alan, one of the soon to be introduced Transpennine Nova 3 units. 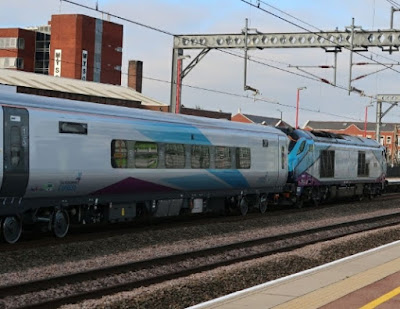 At the other end, the driving trailer ... ... and the whole lot carrying surely the most ugly livery ever to be seen on Britain's railways.

Talking Of Livery
The revised paint job for the nationalised British Railways East Coast company has appeared on one of its trains, called, excitingly "A Zoomer" (or something like that!). 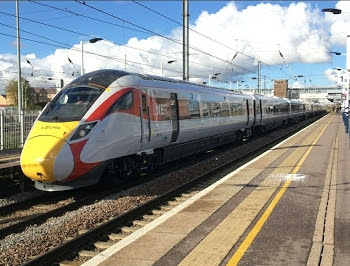 Does "mostly white" really suit (a) the trans and (b) the British weather? 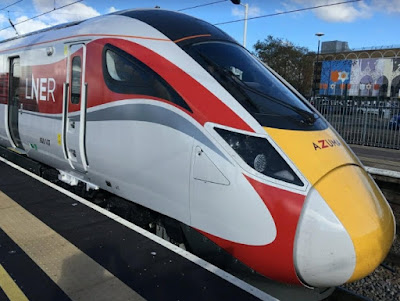 Isn't it about time that franchisees were obliged to accept a livery which remains the same irrespective of who sits at its top table (as with Scotrail's blue measles). After all, the vast majority of the staff stay the same - only the big cheese management gets changed.

Glasgow Central Oddities
Waiting for their run back to London after their recent Scottish coach operated rail holiday, the fbb's had some time to kill at Glasgow Central until their train was ready. fbb amused himself by reading the departure indicators.

A deeply philosophical problem is whether the things passengers ride in are coaches or carriages. According to Scotrail, if there are three of them, they are ... 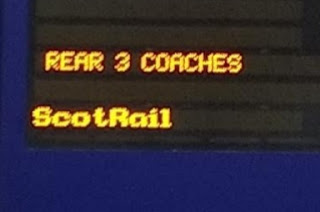 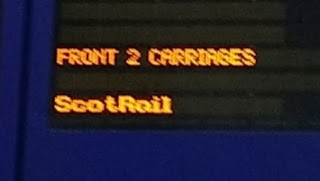 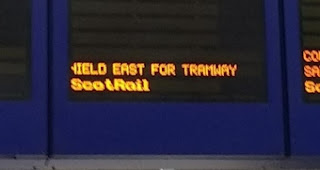 ... when the station is actually called PollokshieldS East. And the Tramway?

There isn't one. It is the name given to an Arty centre located in the remains of Coplawhill Tram depot. 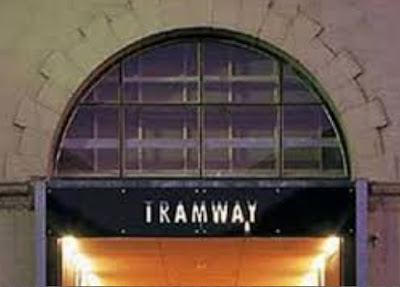 fbb's final and apparently unanswerable question is, "What is so special about Neilston Station?" 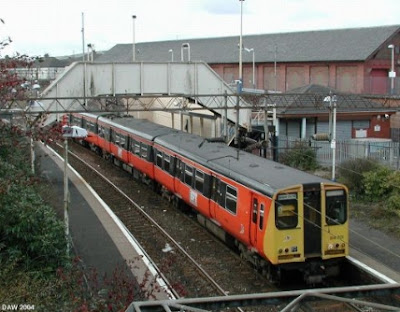 Nobody knows; but it is the only destination on the whole of Glasgow Central's departure screen ... 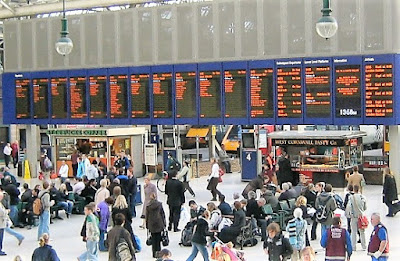 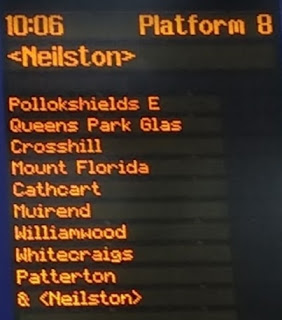 Rear View Electronically
fbb reported that just one of the new buses for First Glasgow's route 75 was equipped with TV camera rear view "mirrors" - the first bus to be certified thus. 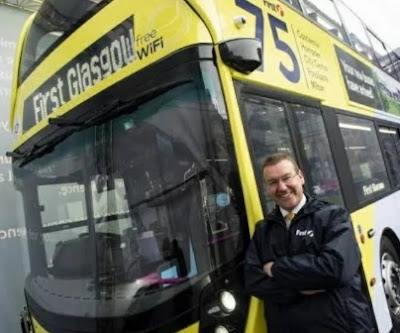 Firsts's Bristol boss, James Freeman, was visiting the recent bus exhibition at the NEC when he spotted a demo of the new technology.

He photographed the view from the cab, with mirror sized TV monitors upper right and upper left of the windscreen. 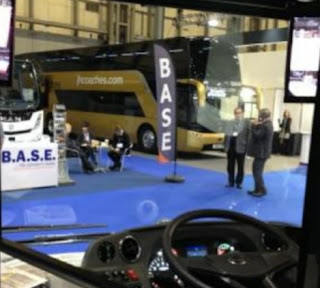 He explains all in the Bristol staff newsletter (click on the extract below to enlarge it). 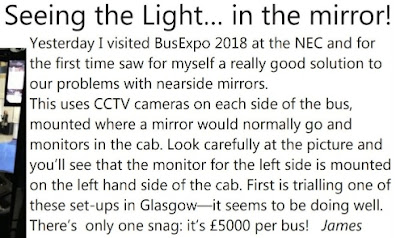 Five grand seems a lot for two cameras and a couple of screens. The price will need to come down a great deal if this excellent safety feature is to become standard.