Dramatic Events In Bristol - No 2

fbb has reported on transport in various cities in Europe and in almost all cases there is one thing you will NOT find. That is graduated fares. One flat fare for the main part of a city is fairly normal. Of course in a very subsidised and regulated setting it is easy to offer flat fares as the cashbox is often a very small part of the total revenue. 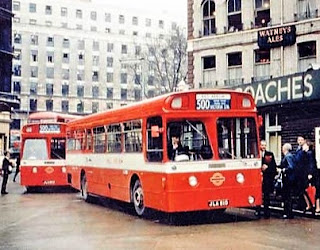 The buses were called Merlins by London Transport but everyone else called the Swiftsa!

At about the same time as it cost a tanner to travel (quickly?) between Victoria and Marble Arch, the town of Sunderland was being even braver. 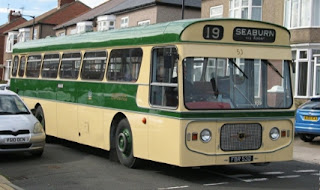 The flat fare for the whole town was 4d (between 1½p and 2p) and could paid by pre-bought tokens at a discount. The scheme was deemed to be a failure and was dropped three years later. 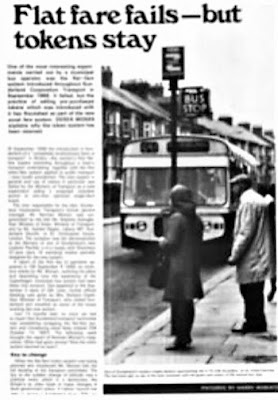 Too revolutionary and a financial no-show.

Over the last decade or so, jumps have become bigger as fares have increased well above the rate of inflation. Jumps of £1 are not unknown and most operators leap by 50p.

On Sunday last, November 11th, something amazing happened in Bristol. 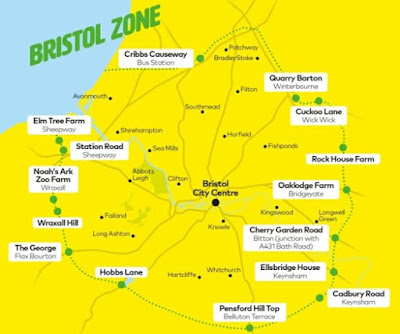 Of course it is not quite the big deal it might appear. Until November 11th there were only two fares on Bristol City routes, £1.50 and £2.50.

First Bus tells us about the change ... 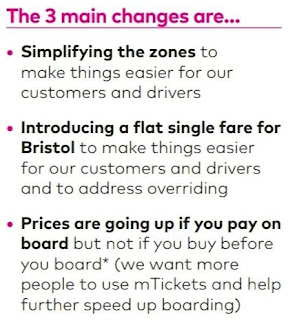 It is quite difficult to get the full picture from the web site, but this is what seems to be happening.

The flat fare for those out-of-date stick-in-the-muds who are stupid and uncooperative enough to want to pay ££££money££££ (that will include a lot of visitors - a breed which the city wants to encourage), will be £2.50.

That's a big kick in the teeth if you were previously making a "short" journey at £1.50; but the same as previously for a two zone ride.

But, if you "pay before you board" using whatever system you want to use (smart card, contactless bank card, mobile "device", cowrie shells) you can buy an electronic "carnet" of five tickets for £10. The pack of five is not new but the £10 price is (perhaps?).

Also introduced is the ability to buy one single flat fare, cashless, obviously ... 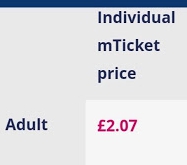 Yer what? A flat fare that is actually lumpy?

After explaining the whole scheme ...

The price of a single ticket is being unified to what First Bus and Bristol Mayor Marvin Rees said was a ‘flat fare’ no matter how far you travel in Bristol on the bus.

But now the firm is introducing a ‘flat fare’, and splitting the difference by making the cost of a single ticket £2 for ‘mTickets’ bought on the phone app.

That move - which will increase the fares for shorter journeys by 50p - did not go down particularly well with Bristol's bus passengers when it was first revealed by Bristol Live late last month.

But it’s not quite as flat as it first appears.

... the local rag goes on to explain the extra 7p

The phone app will continue to sell those single tickets in ‘packs’ of five, for £10, but for the first time will introduce the availability of people buying just one single £2 ticket for one journey on their phone before they board.

Except that will cost £2.07, with the extra seven pence a booking fee imposed by the company that runs the app on behalf of First.

You would have thought that a company with global interests could write its own App and run it for a lot less than 7p a fare - somebody is ripping someone off. An App might cost a few thousand to write - but it costs almost nothing to run. Or, yet again, has aged fbb failed to understand the finances of the world of bits and bytes?

How much would it cost to collect the £2 cash in a farebox ... 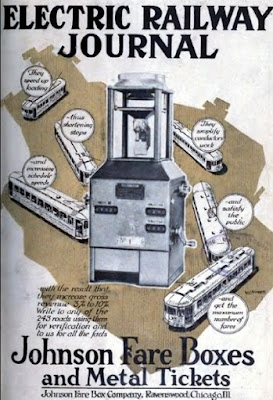 But even First Bristol's flat fare (with lumps) is still way short of the European system. If Mrs Miggins shells out her £2, changes her mind because she has left her umbrella in the last shop and has to go back, she has to pay another £2; then a third £2 to remake her original journey.

Of course, in Bristol, she can buy a £4 ticket (the equivalent of two single "electronic" fares) and ride for a day - but only if she plans in advance.

In Stuttgart, for example, she would have 3 hours to complete her single journey using as many buses, trams and trains as she wishes.

And a £2 flat fare is a big discouragement for short journeys. Stuttgart has a three-stop short hop ticket to encourage short rides.

One final question which fbb has posed before. Is electronic fare collection really faster than cash? A cynic might challenge First to prove their contention. There is no doubt that non-cash transactions are becoming more and more popular - but will they remain so popular when the significant discounts are eroded "due to the harsh economic climate and big increases in operating costs"?

An fbb tale (included in blogs before; but old people are allowed to get RATS** - it is one of their last pleasures!). When Sheffield Transport introduced one man buses on routes to Parson Cross ... 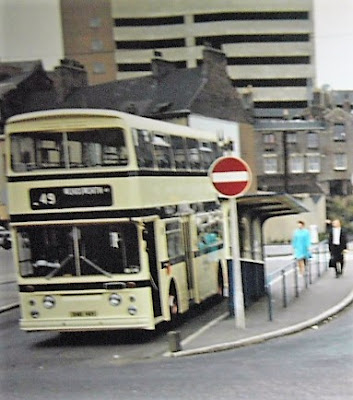 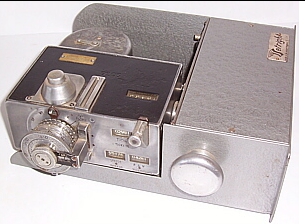 But fbb had better be positive ("for a change", we hear our Anonymi shout).

The Bristol concept is on the right lines and it maybe the best than can be achieved with commercial bus operation BUT ...

If our nation were ever serious about promoting public transport in our cities, it simply isn't good enough.

Muted praise then, for the first UK city (outside London)** to go flat fare since Sunderland Corporation's brave failure. 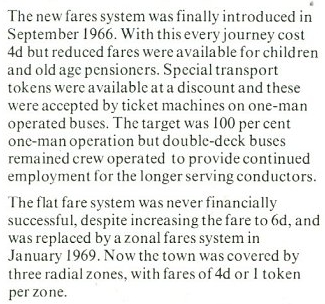 What guesses about the long term future of the Bristol scheme? 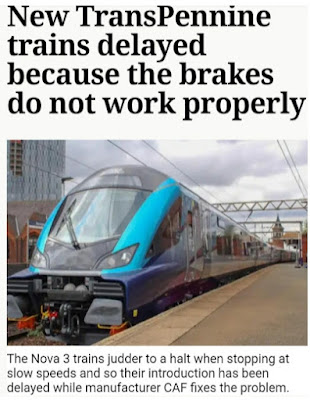 That's the units with a class 67 diesel loco push-pulling at the other end. 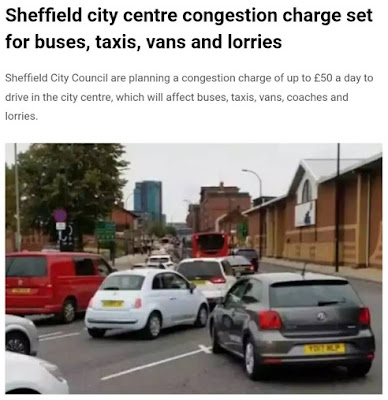 **First UK City - fbb is struggling to think of another one.