Have You Been to Conder Green? [1]

fbb occasionally receives phone calls, txts or emails seeking information on proposed journeys by public transport; one recent such was from central France seeking times of buses from Sheffield Interchange to Aston on the X5. Fortunately, with the GoTimetable Sheffield App close at hand, that specific enquiry was dead easy.

But the particular call which has provoked this series of blogs began innocently enough. Chum Darren Wichman rang to tell fbb that Mollie's funeral was not yet arranged. As fbb already knew that, there had to be another motive for the call.

"I am going to Blackpool for the weekend (for some sort of tram "do" - fbb) and would like to stay at The Stork in Conder Green." 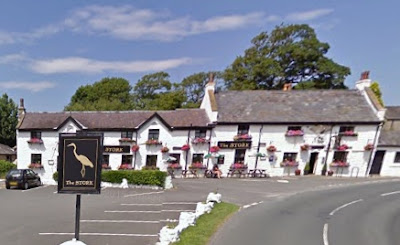 "It's near Glasson Dock", advised Darren. 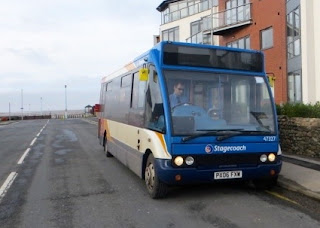 "I rang up Stagecoach for the times of the 89, but the young lady said that they no longer operated the route."

Darren is a technophobe of the highest grade and has no computer, smart phone or any kind of pad; which is why, in desperation, he turned to the chubby one. fbb in turn turned to the old xephos files and there, indeed, was Stagecoach 89 via Glasson Dock and Conder Green Stork Hotel. 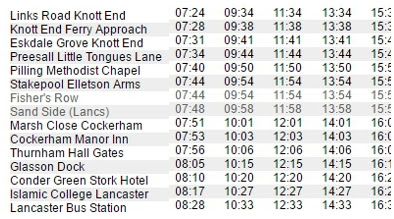 We know that Stagecoach no longer serves these destinations; but who does, if anyone?

But before looking at the detail, your noble blogger needs to refresh his memory as to where these places are on the map. 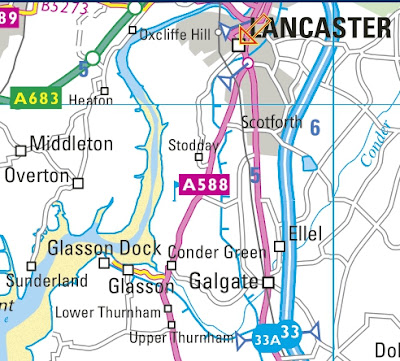 Glasson Dock was built by the owners of Lancaster Docks to make it easier to get ships in and out. Access is only available for an hour or so around high tide, so the port never became very important.

The quay was connected to the railway network in 1883, operating until the closure of passenger services on 5 July 1930. Goods rail traffic continued until 7 September 1964. The track bed of the disused branch line is now a linear park and cycleway.

And here is an old map which shows a station at Glasson (red blob)  ...

... and sidings continuing westwards to the dockside. The station was not huge. 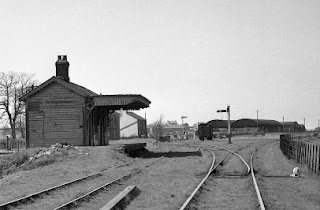 It also shows a closed station (white blob) near Conder Green. An aerial view reveals the station house as a cafe and the footpath running from the north ... 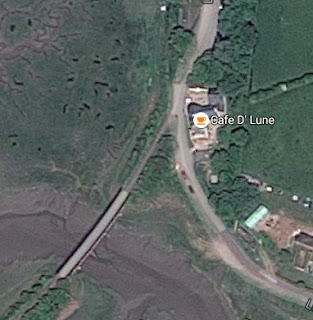 ... and crossing the Conder River on the old railway bridge. 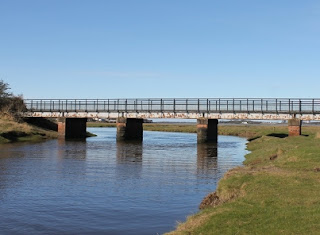 The access road to the rest of humanity curves round to leave the picture at bottom right. At the Lancaster end, this line curved sharply into Lancaster Castle Station with a spur to the dockside. 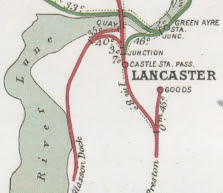 There is nothing recognisable of the line as it approaches Lancaster but a real expert might spot the remnants of a bridge abutment; the Google maps aerial view does, however, show the obligatory line of undergrowth! 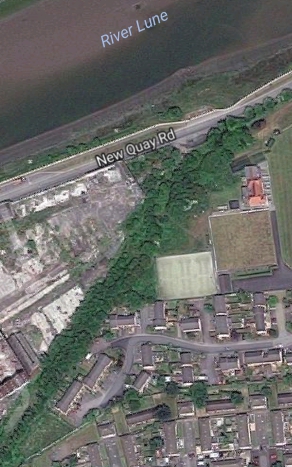 Assuming Darren were coming from Blackpool he might well take the tram to Fleetwood and cross by the Knott End ferry (of which more later).

At Knott End he might, in the past, have been able to observe another little branch line. 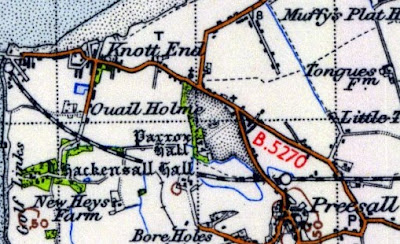 This ran almost due east to Garstang Town station whence it turned south and ran alongside the west coast main line to terminate at Garstang and Catterall station. 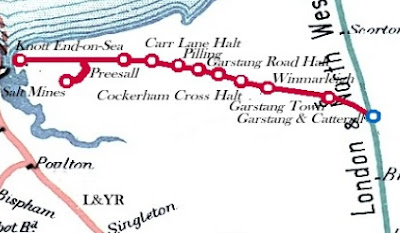 This line also closed to passengers in 1930 but the station was right next to the ferry slipway. 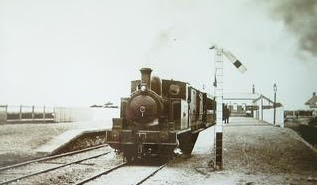 The site is now occupied with flats and a cafe. 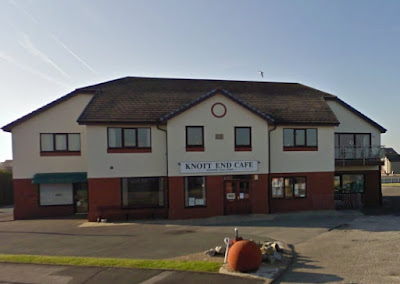 All of this provokes an interesting thought or two. If Darren had been making gis journey in the early part of the twentieth century, he might have chosen to go all the way to Conder Green by train. 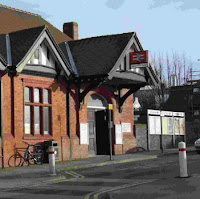 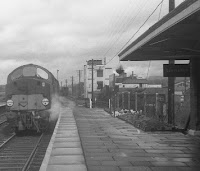 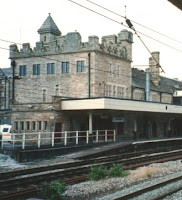 Followed by a short walk to the Hotel. 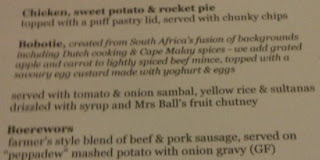 The above is a menu extract published by an on-line writer; it has probably changed by now.

But enough of this nostalgic digression. Darren wants to get to Conder Green in 2016 and is starting in Blackpool. The first obstacle in the ferry at Fleetwood! 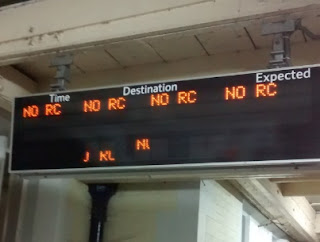 This was Axminster Station a week ago. All signs were malfunctioning. The ticket office was closed and there are no departure posters on display outside the closed booking hall.