Fame and Fortune for fbb? 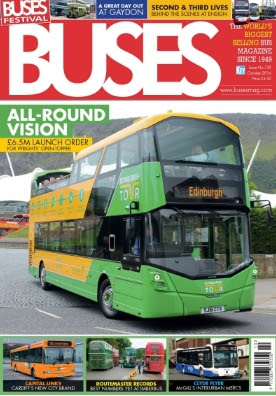 They do say that once you start getting quoted in the "serious" press, you have made it journalistically.  That accolade probably doesn't apply to the chubby one, but he is encouraged to have been quoted in the current (October) edition of Buses.

The paragraph is in an article by Rhodri Clark about bus destination displays and stop names. 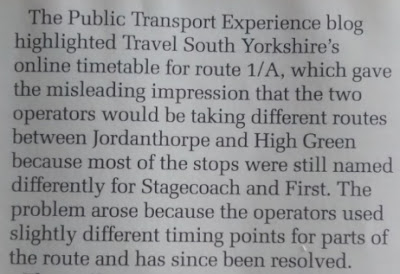 Mr Clark is not quite correct although he can hardly be blamed for not understanding what has happened in Sheffield.

Consultants briefed by the PTE came up with some very strange ideas which went down like a whole flock of lead balloons with the people of Sheffield. Buses that used to run from Gleadless Valley to Shiregreen were re-jigged to run to High Green. Meanwhile, just to keep everyone on their toes, buses than ran via Woodseats and cross-city to High Green ran to Shiregreen.

So the 1 and 1A ran from different points south of the city ... 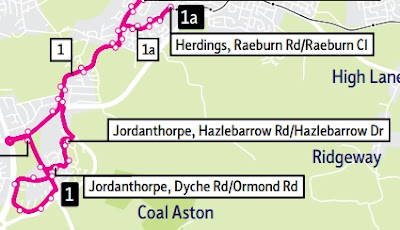 ... to the same destination in the north. 1A is operated by First, 1 by Stagecoach. To compound the complication, each company follows a different route at Ecclesfield. First runs via Ecclesfield village where most customers are ...

... whilst Stagecoach goes via Ecclesfield Common where few live but many may wish to go to Morrisons. Or is more likely that the real reason that Uncle Brian's buses run that way is nothing to do with passenger needs. It takes the service past the Stagecoach depot, thus facilitating staff changeover.

So, in response to Mr Clark's excellent article, the 1 and 1A DO have different routes, but where they should be the same there are problems.

The difficulty was that they showed different time points on the lengthy common sections of the route. This did give the impression that this common 6 minute frequency was not common at all.

The published paragraph ends, "This has now been resolved."

IN true pantomime style; all together, "OH NO IT HASN'T!!!" 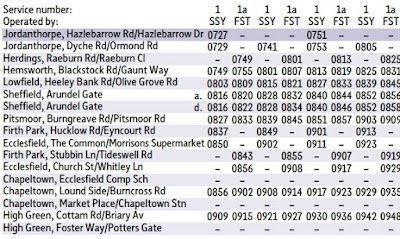 Look at the times at Firth Park.

Two different time points but the same route. Whilst looking at the above timetable, please note that ALL buses serve Hazlebarrow Road; ALL buses serve Ecclesfield School and ALL buses stop on Foster Way. (click on the timetable above to see the locations in a larger size).

But the best (worst?) example of incomprehensibility is seen as buses approach High Green.

To the right of the 1A is a route difference, apparently. But what is it? The timetable and route descriptions are no real help. Fortunately the full colour "North" PTE route map tells is what happens. 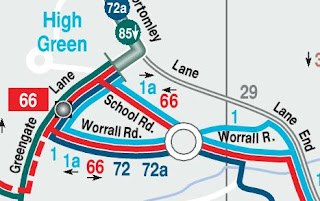 And it is just plain daft.

There is a reason for this nonsense and it goes back to 1947. As the housing on the two roads developed, Sheffield Transport extended a few buses at works times to there from Chapeltown and they turned round using the roads indicated as a loop. 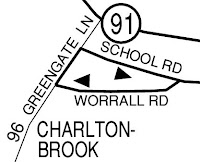 When, post deregulation, services were re-organised and incorporated into the main High Green timetable the same two roads were still used.

fbb did ask First Bus bosses why they still went that way but no-one had any idea! "It's how we have always done it."

When Stagecoach started to compete on the High Green Route with their service 87 they chose the road offering the larges number of houses and the simpler route.

In the true spirit of the Sheffield Bus Partnership, neither was prepared to change. And don't try checking this on the PTE's new post 4th September network map. They have merged "North" and "South" into one single map, on the face of it a good idea. 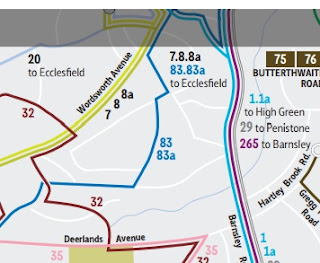 But complex areas (Ecclesfield, High Green, Stocksbridge) are now omitted. Not a good idea at all.

One computer generated silly on the 1/1A PTE timetable is illustrated here. 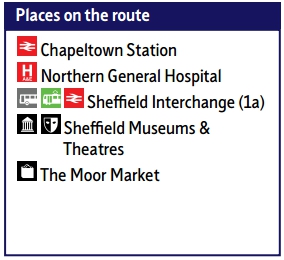 Note from the above that service 1A serves Sheffield Interchange. How true! 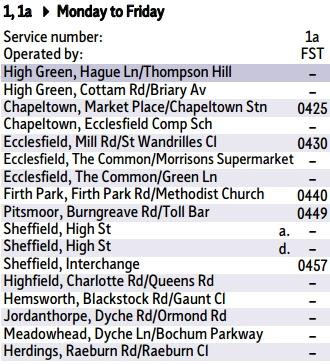 But with just one journey, arriving at 0457.

And while looking at that panel, how about this one? 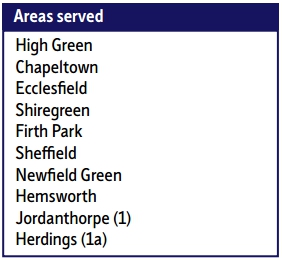 There is no mention of the different routes via Ecclesfield and Ecclesfield Common but, weirdest of all, neither the 1 nor the 1A serve Shiregreen. Of course, a computer system says they do. 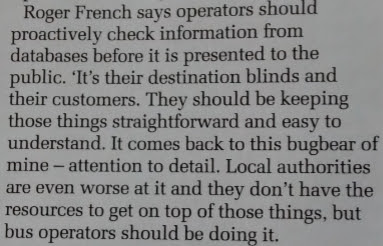 The closing sentence should be tattooed onto the forehead of every bus manager.

And so say all of us!

Next arboriculture blog : Saturday 17th September
Posted by fatbusbloke at 02:00