fbb's DMU is Quite Interesting?

Triang were always ready to take advantage of developments in the "big" railway and in 1958 the company introduced a modern two car diesel unit; but it was coveted by a relatively penniless young lad who grew up to be fbb. 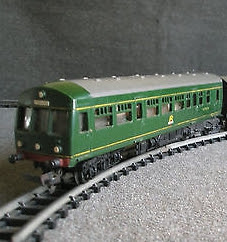 Some 58 years later he finally bought his own model D M U.

It was, said the advert, a three car class 110 in BR green lovery with "whiskers". A quick check-up on what the Class 110 was.


The Class 110 diesel multiple units were built by the Birmingham Railway Carriage and Wagon Company in conjunction with the Drewry Car Co. to operate services on the former Lancashire and Yorkshire main line. They saw service uniquely is this region, which earned them the name of the 'Calder Valley' sets.


This bit of railway line was originally the main line of the Lancashire and Yorkshire Railway, one of the busiest early railway companies in the UK. The line ran from Manchester (Lancashire) to Leeds (Yorkshire) - there's a clue on the company name - but not via the most direct route. 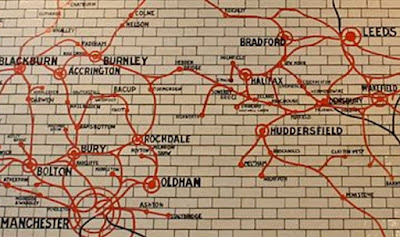 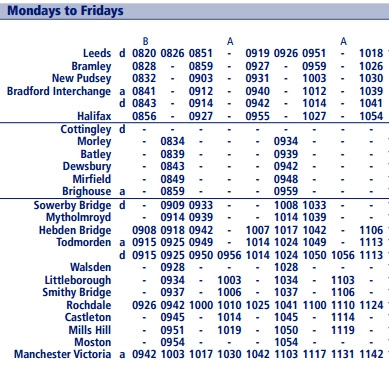 Because the line is steeply graded and has sharp corners, something more powerful than "standard" modernisation plan diesels was needed. Hence the 110s. To help speed up the service the centre cars were removed and scrapped but later, in a typical volte-face, centre cars from other units had to be popped back in because, oh deary me, the route was attracting more of those awkward creatures, namely passengers.

After their BR green livery, the trains were refurbished and appeared in white with a blue stripe ... 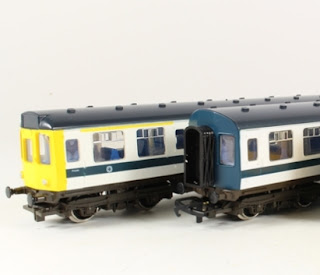 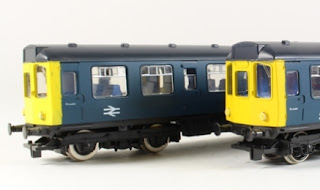 ... and the better-looking blue and grey. 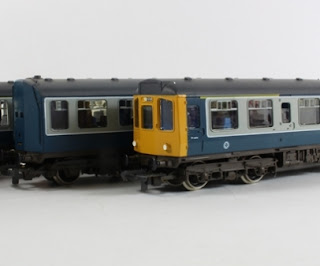 Models with all these livery variants have been produced by Hornby (successors to Triang) at various times. Today's trains are the ubiquitous class 158s. 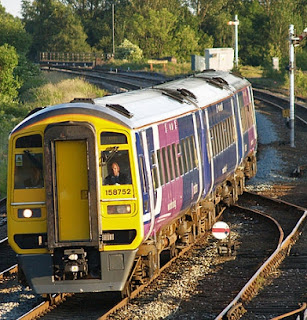 In Yorkshire (c/o the West Yortkshire PTE) the service was "branded" Caldervale ... 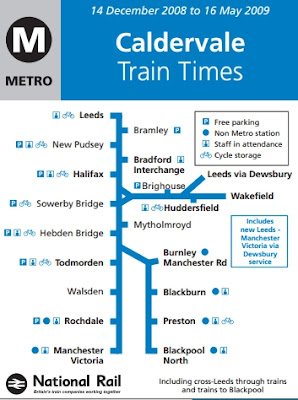 ... which, although lacking "provenance" was deemed to be more trendy than the truth. It reverted to "Calder Valley" in 2013.

And, talking of branding, the old Northern franchise run by Abellio (Nationalised Dutch Railways) and Serco ...

... is now run by Nationalised German Railways (aka Arriva) and has spent huge amounts of our fares money in a rebranding exercise.

Or maybe used something designed by young Alex, the six-year-old son of a station cleaner from Mytholmroyd? But it will provide the opportunity, again at high expense, to repaid all the vehicles ...

And to keep up the "change for change's sake" policy, the web address used to be:-

... clearly a massive improvement in service to the public

Hattons advert came with a warning that it was an "erratic runner" and that one of the exhaust pipes was "damaged". 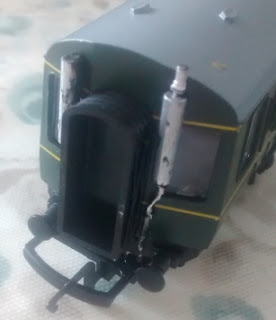 Even fbb's stubby fingered incompetence should be capable of fixing the exhaust problem with a bit of cocktail stick and plastic filler. As a bonus the previous owner has added a driver ... 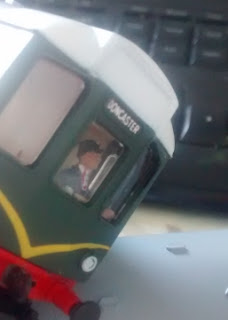 ... and a sparse load of passengers. 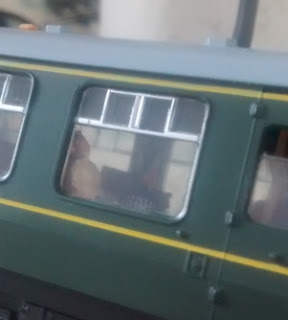 But that "erratic" running did not sound good. In fact the problem was more acute. When fbb placed the driving car on his track and turned up the juice  ...

This time the motor whizzed away nicely but the train remained resolutely static on the track - not so much an erratic runner but a completely NON-runner. fbb appeared to have bough a porcine creature in a Scottish paper bag. 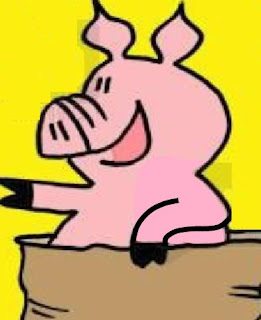 Best look inside. When fbb was just a lad, electric motors in model locos were really simple. 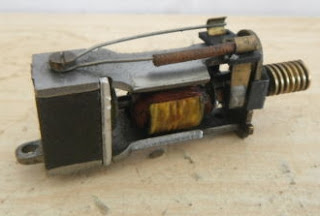 Replace the brushes, replace the spring that holds the bushes and clean the gaps in the commutator (hidden behind the brushes in the above piccy) with the point of a needle; that's all you ever had to do.

From your school physics lesson. The brushes take electricty via the commutator to the coils which create a magnetic field in sequence. The electromagnets are attracted to the fixed magnets, again in sequence; thus the rotor (spinning bit) turns. 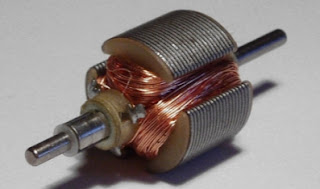 The worm wheel meshes with cog on the axle and, hey presto, the model loco trundles along.

The motor was crude, could be jerky at slow speed but was reliable, replaceable and easily repairable.  The motor in fbb's 110 diesel unit is different.

It is a Hornby "ring field" jobbie. 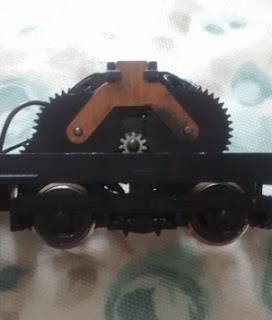 fbb thinks (?) that, in this piece of design, the fixed magnets surround more of the rotor, thus ensuring smoother running and more power. But fbb really hasn't a clue!

By using his eyes, the old man noticed that the little grey spur wheel was whizzing round but not moving the black gears and thus not moving the wheels. The spur was loose on its axle.

Solution: relying on consummate skill and and encyclopaedic knowledge of small electrical "stuff", (NOT, very much NOT) fbb pushed the spur wheel back on its axle and added a dob of superglue.

Result: the "erratic" running class 110 model ran sweetly and without jerks (other than he who controlled it!) over even the roughest bits of fbb's trackwork. Here it is resting at the platform. 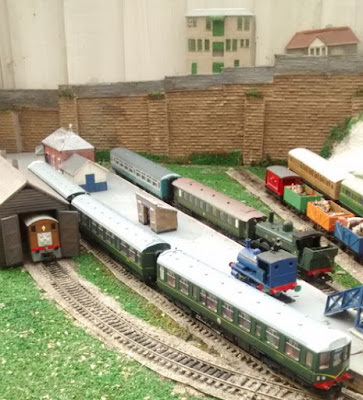 Hey, is that a (model) person sitting on the roof of the vintage "pug" loco displayed on the platform? 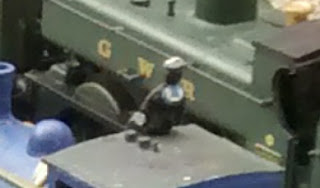 Yes, it's a sailor, off duty. fbb is a stickler for realism, even if his models are a bit ham-fisted.

So the very good news is that the DMU turned out to be a good buy, an excellent buy no less and a superb addition to the Peterville Quarry Railway.

Another "pre-owned" purchase was the wooden loco shed in which resides Toby the Tram Engine in the station picture above. This time the warning stated "sold as seen, one door broken" which is equally ominous. 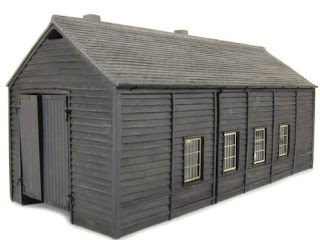 But it wasn't, really.

The doors are held on with delicate "hooks" which drop onto equally delicate "eyes" on the body of the shed, 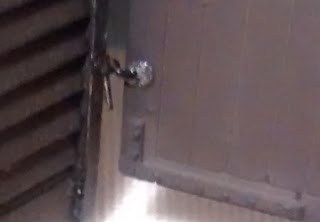 For one door (of four, two at each end) the eyes were broken off and would be tricky to replace. Solution, more superglue and fix the door in the open position, 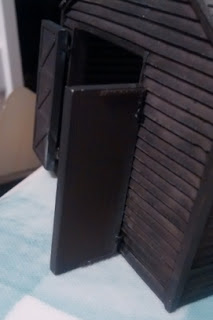 In all other aspects, the model was "as good as new". Another bargain.

Next bus blog : Monday 26th September
Posted by fatbusbloke at 02:00