Travel South Yorkshire Is At It Again
Sheffield's trams to Ecclesall terminated at Banner Cross ... 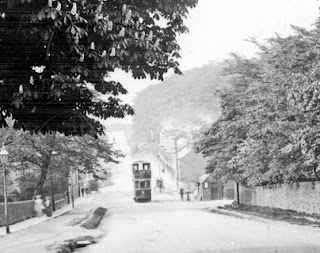 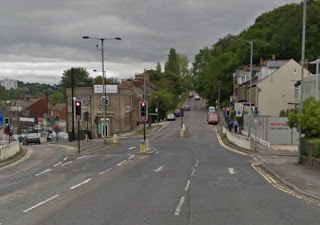 Then services were extended up the hill, past the church and into the top bit of Millhouses Lane. 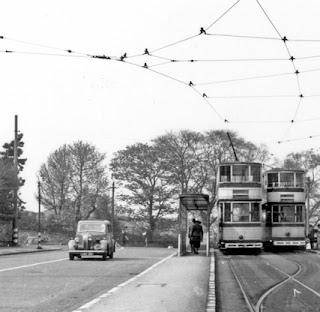 For many years replacement bus service No 82 terminated in the same place. But it too is very different now. 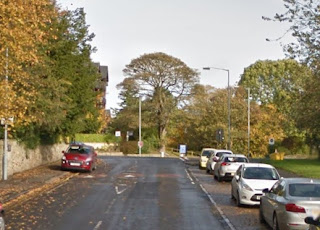 Just round the corner, beyond the car on the left (there is one in both pictures!) Sheffield Corporation (as it then was) built a splendid shelter combined with ladies' and gents' "facilities" 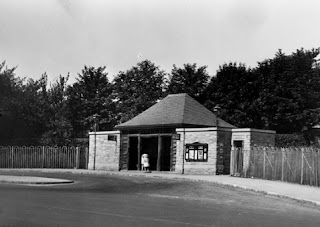 This was orignally for bus routes, those that ran into the bus station from Derbyshire and those terminating to make connections with the frequent "cars" to the centre of Sheffield. It is very different now. 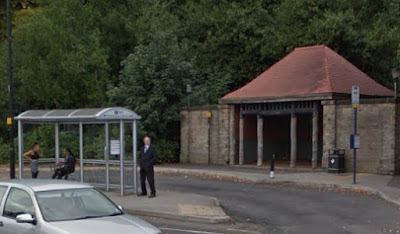 The toilets have long-since been closed but are not yet turned into a coffee shop or craft workshop. The windows at the back of the shelter ... 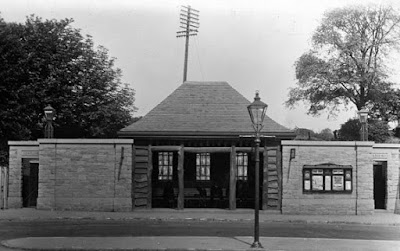 ... have been bricked up giving the whole experience an aura of unease and doom.

But why the second shelter? 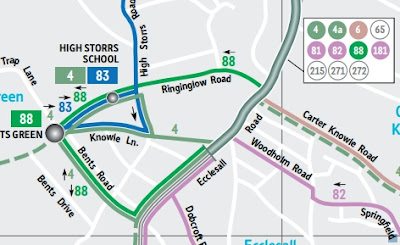 There is competition at that stop! Stagecoach 88 (GREEN) runs every ten minutes into Sheffield City Centre and beyond. First bus 81 (PINK) arrives along Ecclesall Road every 20 minutes. First Bus 82 (PINK) approaches via Woodholm Road combining to give a bus every ten. Under normal circumstances, 82s would turn right at the top of the road ... 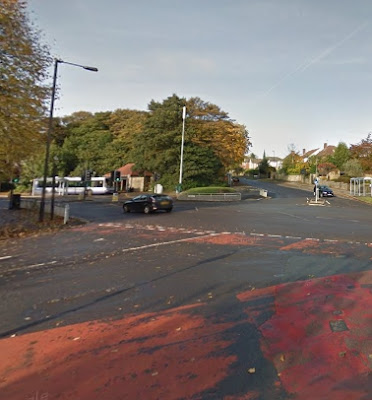 ... but they don't. They turns LEFT them do a terrifying U-turn across the ludicrously busy Ecclesall Road South and use the lay-by to complete the turn. So the 81s uses the lay-by as well. There is one doing it in the screenshot above.

But nothing else turns in.

Keep that thought in mind for the next bit if the blog.

fbb has already revealed, in a recent blog, that Travel South Yorkshire [TSY] has bought a new toy. This piece of software allows them to merge timetables and produce more bus stop displays; or so said one of the bosses at a recent meeting attended by fbb.

Here is the display as posted on the "front" shelter at the Ecclesall lay-by. 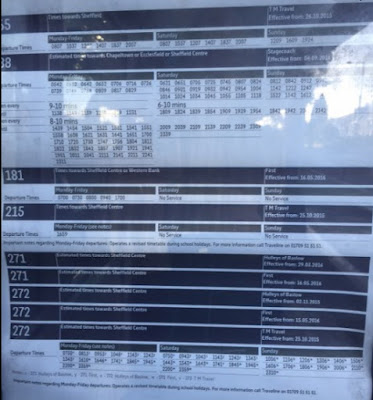 The services are in numerical order so the first is 65 from Buxton.

You might quibble with "towards" Sheffield - what's wrong with "to" -  but for those crowds of people who wait excitedly for the 65 to take them into town, the panel is very useful.

Next in numerical order is Stagecoach's 88. (Are we missing something, do you think?) 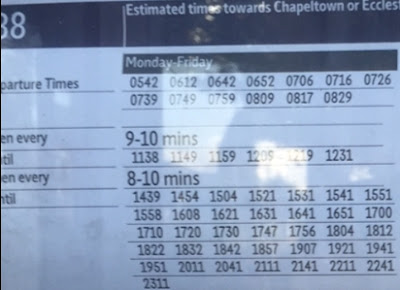 Why bother? If you must summarise, rather than list every journey as fbb's birth town bus timetable book used to ... 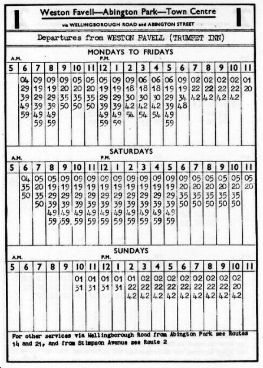 ... then "approximately every 10 mins" is good enough, surely?

fbb is sure there is something missing. Can't quite put his finger on it.

Next we have the 181. This is a real oddity. The route to Dore (now the 81) used to go via the University and the Hallamshire Hospital, but when the 81 was diverted and extended there First created the 181; a few bits and pieces going the old way at Monday to Friday Peak times.

It tells us the the 181 goes "towards Sheffield Centre OR Western Bank". WRONG! No buses go to Western Bank.

All buses go via Hospital and University (Glossop Road stop); there is no "OR" involved, but just ONE bus (0730) continues to "Sheffield Centre"; that is the Interchange, the same place that is called "Sheffield" for service 65.

This, does indeed run towards the City Centre, i.e. to the Interchange but were are warned to "see notes". We have come across this note before, at the bottom of Cobnar Road (read again). It reads:-

Now lets look at the schooldays service as published on the panel above. There is the 1659 schooldays (SD) journey; and next to it is the non-schooldays journey; leaving Ecclesall at ...

... 1659. But the computer system cannot show you that, you have to ring Traveline.

Finally we come to the 271 and 272. All buses to and from Castleton used to be numbered 272, but when the Dore service was re-organised, some were diverted via the University etc. and numbered 271. 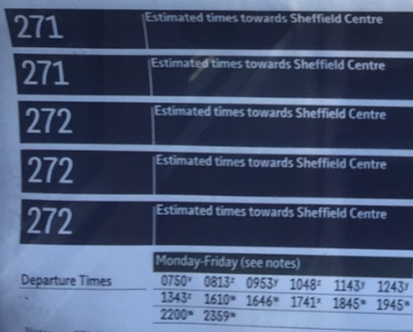 Of course neither the heading nor the list of departures tells you which way the buses go; from this display there is no way of finding out. The panel does tell you which company operates this messy timetable. 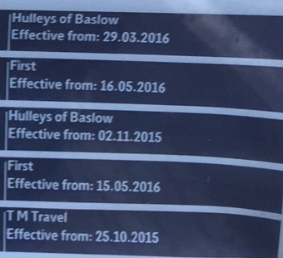 For passengers who might only travel on buses that ran in 2015, this panel is really helpful. But there is a note against each time, a very small note, which tells you which company runs which journey. Again, no mention of which way the bus goes.

fbb is still bugged by that niggle that something isn't there that should be.

And again we are warned that this timetable has notes.

And we all know what the note is, don't we?

And which days, pray, are schooldays?

Yet again we go back to ex Brighton MD Roger French's telling quote ...

... clearly a concept completely alien to the bosses at TSY!

There is another notice on the "front" shelter. 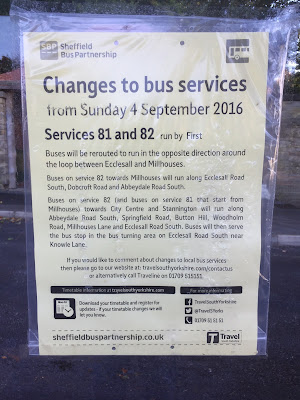 It tells you that First Bus routes 81 and 82 will serve this stop; actually the lay-by behind the "front" shelter. but the notice is on the front shelter.

It is possible that a second timetable frame on or near the old shelter (the "back" shelter) may have a timetable for the 81 and 82, but most passengers would look at the obvious diplay next to the poster about the 81 and 82 in the "front" shelter. If this service is competing with the 88, surely the information should be in the same place.

But because the First Bus stop is given a different name in the dreaded database, it will be treated as a separate stop.

See the Roger French quite above!

Something like the above would be very helpful. fbb has asked the GoTimetable Sheffield technical team and they say that a well designed and simple piece of software could create a list as above very easily.

Of course, it would need a computer operator who understood where the buses went.

Next Meringue blog : Saturday 1st October
Posted by fatbusbloke at 02:00