The Trouble With Trees


I think that I shall never see
A poem lovely as a tree.

A tree whose hungry mouth is prest
Against the sweet earth's flowing breast;

A tree that looks at God all day,
And lifts her leafy arms to pray;

A tree that may in summer wear
A nest of robins in her hair;

Upon whose bosom snow has lain;
Who intimately lives with rain.

Poems are made by fools like me,
But only God can make a tree. 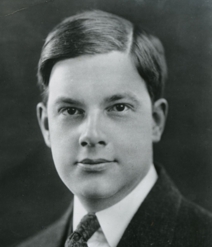 ... and his poem falls into the "pass the yuk bucket" category for most of today's readers.

Trees and trains do not mix. Trees fall down in high winds ... 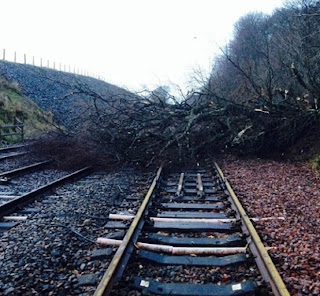 ... and fallen leaves present problems for modern trains. The leaves fall on the track, get compacted by passing trains and turn into a sort of slippery gunge that makes the trains skid when they should be stopping - or starting. Skidding when stopping is worrying, especial if there is anything in front of the sliding monster. Skidding when starting causes the electric motors to whizz out of control, so the electronics shuts them down. Train, he be stuck!

So the lads from Notwork Rail tend to chop trees down ... 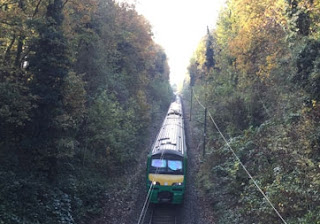 ... sometimes in a draconian outburst of destruction as here on the branch from Watford Junction to St Albans. 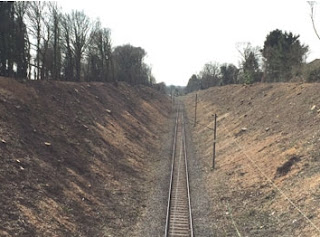 The "environmental lobby" doesn't like this - not at all; but then, members thereof probably wouldn't like their trains to be cancelled or delayed either.

fbb has been grappling with trees recently ... 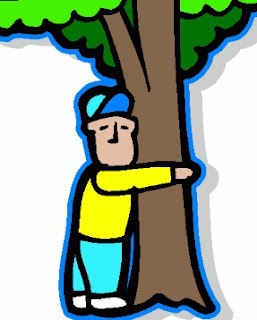 Even a modest tree can be three or four times the height of a train; these pines in America are much bigger. 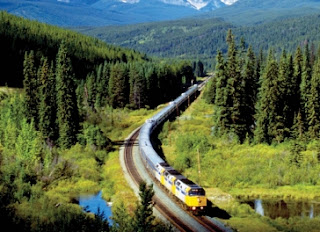 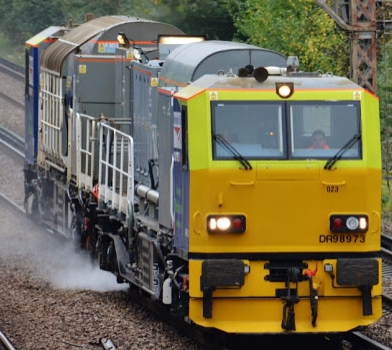 Trees are also quite ragged and uneven as individuals. 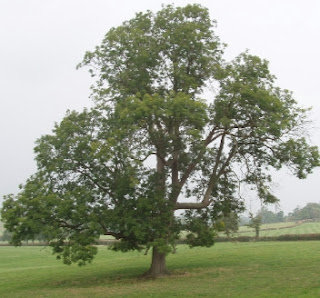 So what is the best way to add a modest afforestation to your model railway? That was fbb's philosophical problem. He could, of course, follow the lead of many modellers and simply run his imaginary line through a treeless waste ... 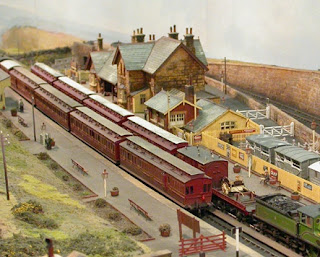 ... possibly using a moorland setting as a source of inspiration. Or he could go urban and/or industrial.

Add to the difficulty fbb's miserly expenditure policy and the old man has a real problem.

His first trees were bought at full price; but they were "cheap and cheerful" (cheap - i.e. less expensive). 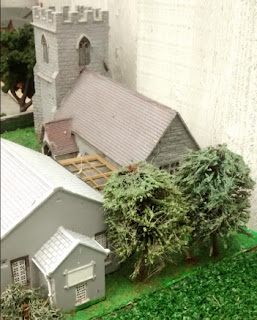 Made of plastic "discs" bent round a twisted wire armature, they are too small for "real" trees and too even in shape. But scattered amongst other stuff, they'll do. Perhaps the Church caretaker keeps his trees trimmed to perfection?

Next came a second-hand purchase. These consist of a moulded plastic "trunk and branches" with some foamy plastic stuck on. 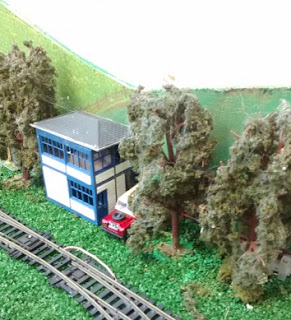 Again, too small and the foamy bits fall off when it rains. Also something mysterious and possibly from the planet Zog is spinning a cocoon of fur all over some of them. They probably won't last another winter.

The third, and currently final second-hand purchase was a bag of 20 pine trees - also, like the birds nesting in them, going cheap (groan). And fbb now knows why. Too small, too evenly styled and with lurid yellow ends to the branches, not easily seen in photographs. 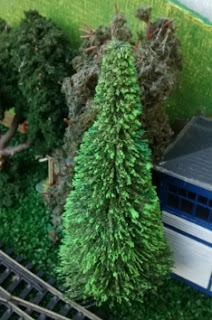 fbb's phone camera somewhat dilutes the garish hue of the ends of the branches.

Would fbb throw them in the bin? Then a cunning plan occurred to the doddery one. Whilst trees are uneven individually, in groups, clumps, a copse or a mini forest they begin to merge together and the similarity of shape becomes less glaringly obvious. 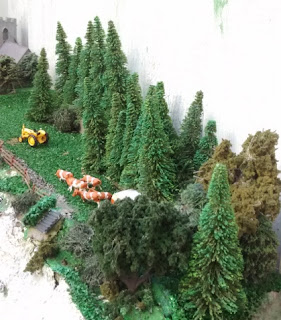 A dribble or two of dark green paint over the bright yellow "new growth" blobs, and things look much better. All three types are in the clump closest to the camera.

But why not buy better trees. How about ONE scale horse chestnut? 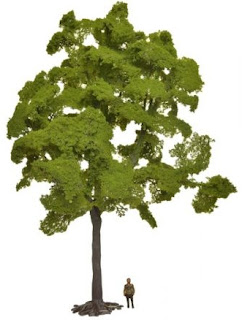 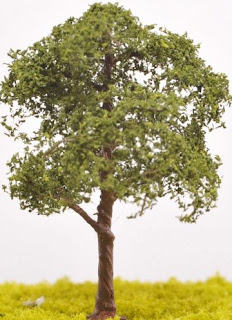 ... until you check and find that it is only 1½ inches tall! The company charges by height and a more realistic 6 inches high would cost £10. A full-sized example to the correct scale could be as high as 12 inches!

The tree-makers, by the way, are The Model Tree Shop (web site here). Other suppliers of trees of various qualities can be found on-line.

Or fbb could make his own. The usual method is to untwist twisted wire to make a tree-plus-branches shape; fill the twists with gunk and glue wodges of leaves in the branches. It is a hugely skilled job and fbb will not live long enough to make any attempts at perfection. But some can do it! 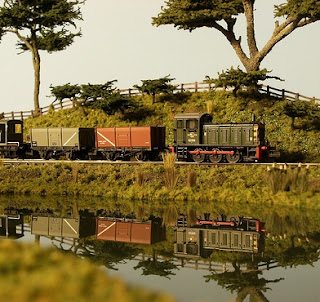 I think that I shall never be
Skillful enough to make a tree.

A tree whose moulded roots are prest
Against the fake earth's plastic breast;

A tree that looks so good each day,
And lifts her leafy arms to say;

"I am big and scaled real true;
with twisted wire and blobs of glue.

Upon which core green leaves are lain;
Which won't drop off when falls the rain."

Models are made by fools like me,
But only God can make a tree.