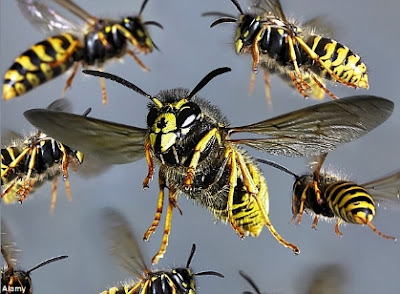 But No Blue Sky Thinking from Sky Blues!

Hampstead Football Club was founded in 1866. A split in the membership resulted in the formation of two different clubs: Harlequin F.C. and Wasps. Wasps Football Club was itself formed in 1867 at the now defunct Eton and Middlesex Tavern in North London; names of insects, birds and other animals were considered fashionable in the Victorian period. 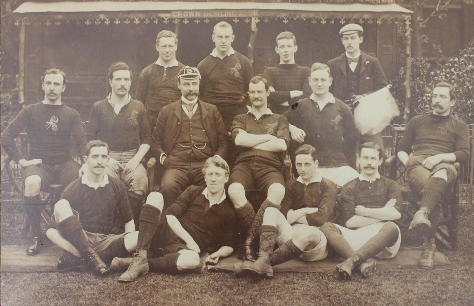 And today, no less, Wasps are playing Harlequins at their new wasps' nest, the Ricoh Arena, Coventry. 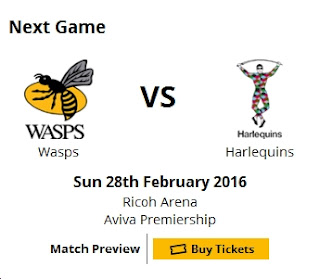 Blog readers may remember way back in late December 2015 fbb related the utterly daft whereby the new station at the arena would soon open; but, on match days, trains would not stop there.


If you prefer an expurgate version, the problem is that London Midland can only spare a one-car class 153 unit to trundle between Coventry Nuneaton ... 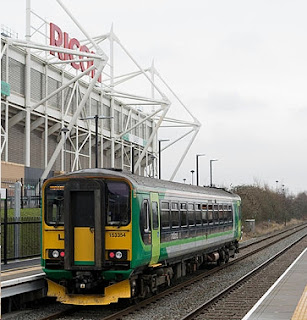 ... and such luxurious vehicles are too small to deal with match crowds. So no trains and close the station. What an excellent idea all round. Of course, a charter train would be possible but the lads at London Midland reckoned they would have to charge £17 return to cover the cost.

But something has happened.

Wasps supporters will be able to use the brand new £3.4million Ricoh Arena railway station for two of the team’s upcoming matches. Train operators London Midland and Wasps have agreed to jointly finance six-carriage charter trains to ferry fans between the Ricoh Arena, Coventry and Nuneaton for the fixtures with Harlequins and Leicester Tigers.

Because it is a charter, no evidence for these times can be found on London Midland or ther Nastional Rail web sites ... 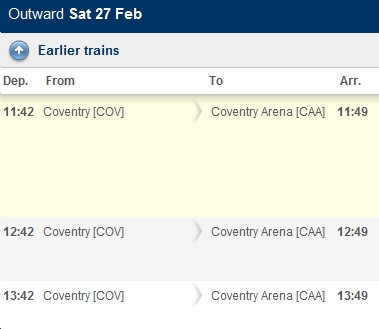 ... but the Wasps literature explains all. 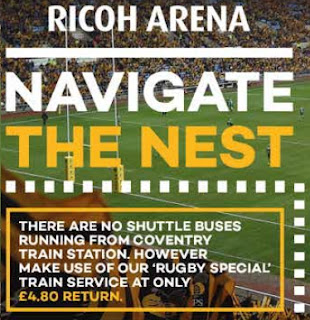 So, reading between the lines, it appears that Wasps management are using some of the money they pay for Shuttle Buses to fund the charters and London Midland have reduced their fees!

There is even a timetable.

The specials (LNCS column head) call at Coventry Arena to set down only and continue to Nuneaton. As shown above there are three pre-match trains from Coventry and two from Nuneaton with a similar depart only pattern after the game.

London Midland say that this service will provide 1000 extra seats (that's 333 on each six-coach trip?) and there is some speculation on-line as to where this stock will come from. 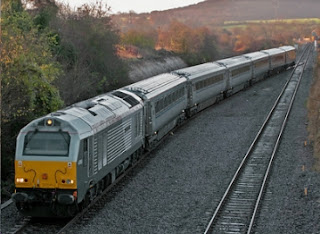 The "Chiltern" set only has five coaches, for example. No doubt all will be revealed today.

But fbb spots a potential snag.

The fare on the charter trains is ...

But that timetable above shows the "normal" trains as stopping at the Arena. And the fare on therm is, according to the National Rail site ... 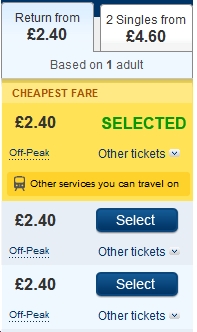 If you were thinking of going to the match by train, which one would you aim for? Of course you would. In the words of the song "There may be trouble ahead ..." Or have Wasps got their prices wrong? Their leaflet, despite headlining the new trains and no buses, ...

Our Northampton correspondent has threatened to nip from Northampton to experience the delights of the Rugby specials from Coventry.

fbb awaits his report with interest!

no services yet
for Coventry City FC supporters


But Coventry City FC fans will still not be able to use the station for an hour after games due to safety concerns around large crowds trying to use the regular hourly service which can only transport 75 people.

Presumably the Sky Blues do not have enough pennies in the piggy bank? Or, more likely (?), the LHCS charter set is only available on a Sunday? 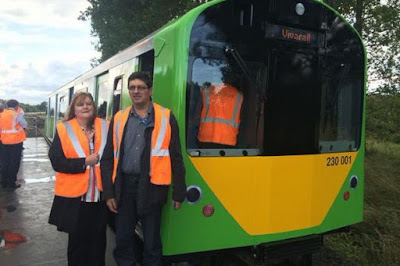 The mysterious (and presumably wealthy) "them" could buy some Vivarail London Transport rebuilds to serve the Stadium on match days. Of course it will be economically viable to buy extra trains to use for a few hours once a week. And there aren't any Vivarail trains yet, anyway.


Next bus blog : Monday 29th February
Posted by fatbusbloke at 02:00