The timetable for route 6 shows a bus every 30 minutes via Bowden Wood and terminating at Littledale. Traveline is the same ...

... as is the timetable from Travel South Yorkshire.

But therein lies a snag. Littledale Mather Road is shown as the terminus. So the table for the opposite direction starts at Mather Road aka Acres Hill School.

They are the same place!

This means there are no inward (to City) journeys from Bowden Wood. Journey planners make you walk rather than allowing you to catch the bus!

It is obvious what is needed. The inward table simply needs a "Bowden Wood" line as below. Then the journey planners will work properly. When fbb wrote critically about this stupidity in a previous blog, some angry anonymous insisted that the timetable could not be presented "properly" because of the rules of the Traffic Commissioners.

But it could be that an attempt by T M Travel to overcome this anguish in their app might explain the silliness of service 6.

The route is described as "Sheffield - Darnall" with no mention of the cross city Tesco bit.

As explained by Phil Stockley himself, boss of T M Travel, you can track each bus; see how late (or not) it is running and calculate how long it will be before the purple people carrier ... 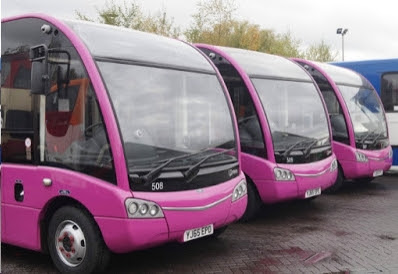 ... pops up to provide passage for the passenger.

So this 6 is going to Millhouses Tesco** (the blue band obscuring the white on red "6 to Millhouses" is caused by the wongler that allows fbb to view his phone on the latop) ... 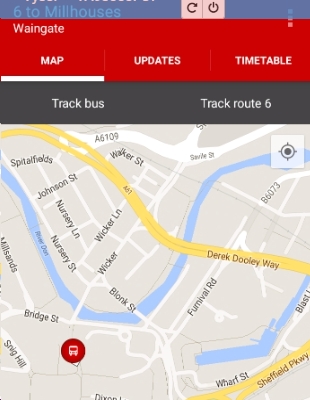 But this map-based information is correct.

And this 6 is also going to Millhouses. 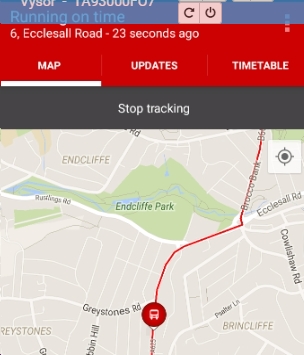 Correct; and it is "running on time".

And here is bus number 3. 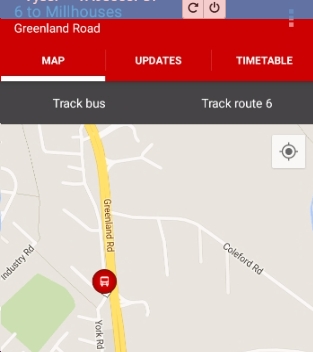 It is on Greenland Road going "to Millhouses". But it isn't. It is on its way to Littledale! Utterly the wrong direction. 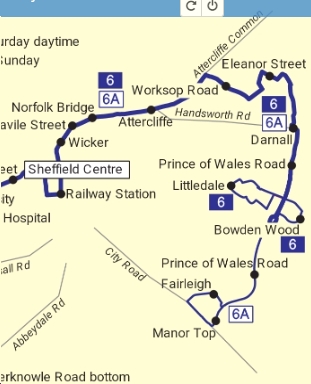 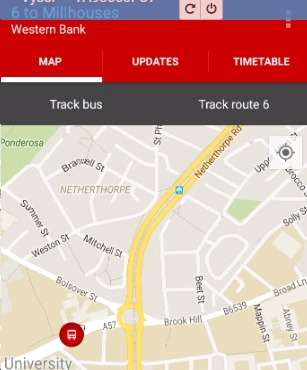 ... Millhouses, again going away from Tesco past the University. It, too, is going the wrong way!

This panel says it is at Western Bank.

Therein is another snag. Service 6 does not run via Western Bank. Here is the Traveline map which proves it! 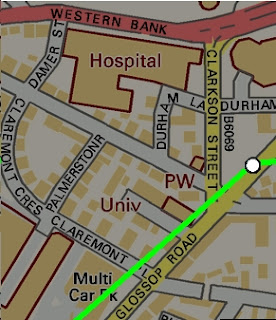 The 6 uses Glossop Road (green line) with Western Bank being the red road (not used by 6) road the the top of the map.

So we have two buses going in the wrong direction and at least one completely incorrect piece of route information. There are more. There is no correct usable timetable available and the journey planners gives wrong information.

Whose fault is this?

Or maybe people have noticed but just accept that information about public transport is intrinsically daft. Or maybe nobody knows how to put it right.

fbb has been described as a dinosaur; one comment writer suggested that there was little chance of the chubby one being dragged into the modern technological age. After all, he wants a timetable book - snigger snigger.

In fact, fbb is well impressed with technology of the T M Travel App; it does useful and exciting things. Once that usefulness is explained or explored it has considerable potential. But it falls down because it simply isn't right. Getting the data "right" involves hard work and one of these ... 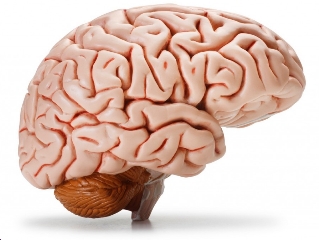 Both can be in short supply when it comes to Public Transport Information. It is just too easy to dish up dodgy data, even in a well designed piece of software.

Rant over. fbb now goes into hiding in the bloggers' safe house as Phil Stockley explodes!

And a big thank you to those blog readers who pointed out the anomalies. They did wish to remain anonymous!


Next bus blog : Friday 5th February
Posted by fatbusbloke at 02:00