When Will They Ever Learn? [1]

fbb is indebted to a renowned trio 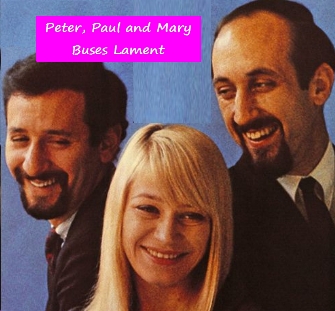 The celebrated 1960s LP, surely in every folk song enthusiasts collection, reminds us of these enduring and surprisingly prophetic lyrics, penned at a time when bus subsidies were beginning to grow ...

So off we go to Guildford where there is a bit of angst because Arriva has announce the withdrawal of their hourly Service 17. 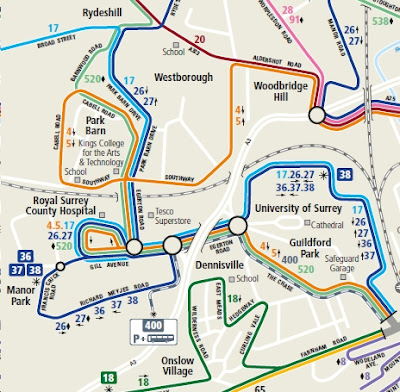 At first glance the 17 (PALE BLUE on map) apoears to follow the same roads as the 26/27/36/37 circular services. So the difficulty may be what happens on Broad Street off the map top left. The County-wide map shows the full extend of the 17. 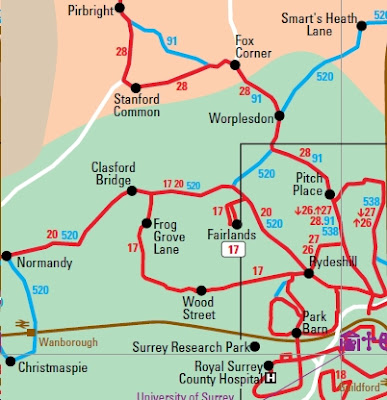 The service passes through the quaint village of Wood Street ...

... neither of which is what might be termed "good bus territory". It then turns back towards Guildford before terminating in the Fairlands Estate (just off the Aldershot Road) near a row of "seen better days" local shops. 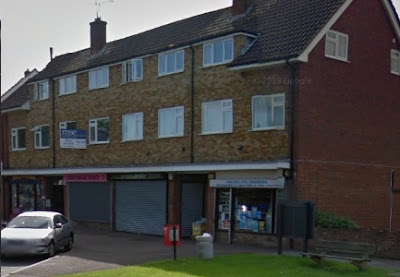 Surrey's map tells us that route 20 runs past the entrance to Fairlands but such a route does not exist according to Traveline. fbb was initially baffled as the 20 was the main route between Aldershot and Guildford. Surely it hadn't died?

This one was still showing "20" however. 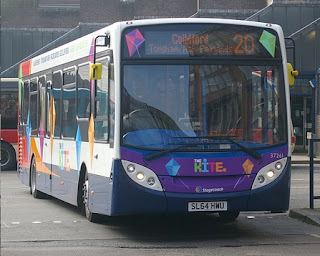 Confusing it must be for Aldershotters and Guldfordians. But the Monday to Saturday service passing Fairlands "at the end of the road" is every 15 minutes, courtesy of Stagecoach.

The big problem, then, is with the local traffic on the way to Fairlands. These good people will lose their bus service completely. Needless to say, the pitchforks are being sharpened and brandished with vehemence ... 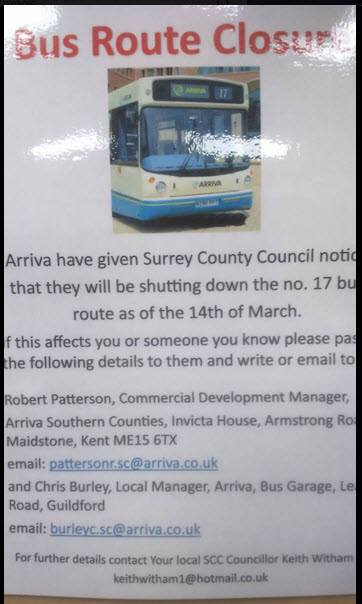 Why is it that folk seem to think a bus company should run its business at a loss? Would shop owners, car maintenance garages, gardeners etc. put adverts in the local press announcing that they would be providing their services whilst going bust, just to be kind to pensioners, schoolchildren and folk without a car?


When will they ever learn?

Think about Tesco; think about what they would do (have recently done) with loss making outlets. A bus route is no different from a branch of Tesco.

Even the MP has become involved ... 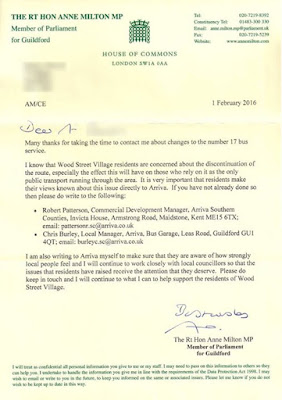 ... sort of. (click on the letter to enlarge it). The letter is fatuous; writing to Arriva is pointless as the company has made its decision based on pennies in the piggy bank. What would convince Arriva to relent would be a reasonable hope of more passengers. Unlikely. 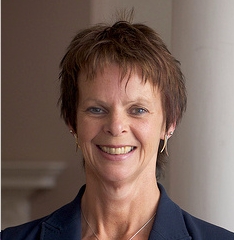 What MP Milton doesn't do is to suggest writing to the County Council, the people who might choose to subsidise service 17. Of course Surrey Council will not be keen as their money has been chopped courtesy of Ms Milton and her Conservative Party.

When will they ever learn?

Whilst the people on the street bemoan the tragedy of buslessness, our present system of pseudo-deregulation will inevitably lead to situations such as the sorrow of the 17. Community buses are an option, but they still need subsidy, often more than the withdrawn bus! Shared taxi options are unpopular because people have, for many a year, been used to going when they want.

Of course, even Tesco sells stuff at a low (marginal) profit-making price. A more realistic model would be to encourage bus companies to provide a total network as required by the local authority paymaster. No way, say the bus companies, because we won't be able to make a "good" profit.


So the key question is, "can the 17 be made into a viable business, even if the profit margin does not reach the heights of that required by Arriva's business model?"

And if so by whom? 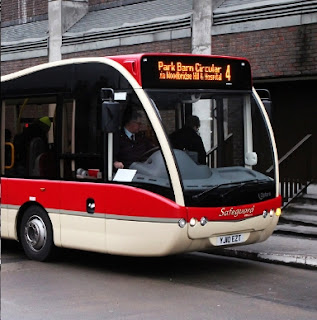 Safeguard was established in 1924 by Arthur Newman, when he converted an accident damaged lorry to carry passengers, and by 1927 was running bus services to the newly constructed Aldershot Road housing estate. Shortly afterwards, another service to Onslow Village commenced.

For many years, Safeguard ran Guildford town services 3, 4 and 5 jointly with Arriva, however from 23 May 2010 the two companies agreed that Arriva would wholly run route 3 and Safeguard have complete control over the 4 and 5.


It would appear that Surrey Council Officials have been chatting to various operators to try and persuade them to take on the 17 as a commercial (profitable?) route, despite Arriva's withdrawal on those very "commercial" grounds.

Is there a white knight ready to take the risk? 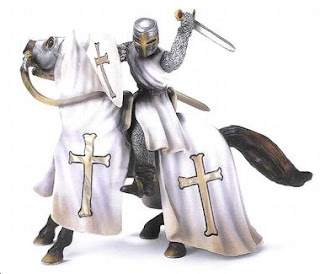 We will see whose bearded visage is hidden behind that visor tomorrow.