News of a few more ex Tates routes taken on by others from yesterday, Wednesday 10 February


Yorkshire Tiger will take over the 75/75A/76. The timetables will be unchanged. 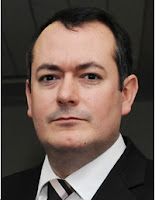 ... has taken up the problem by writng to South Yorkshire PTE demanding that they do something quickly. Which, as one might eapect, they already have. (click on the letter extracts for a slightly larger view) 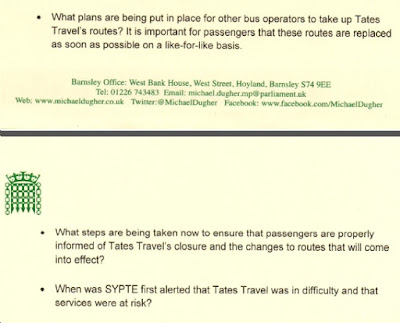 We are all eternally grateful that an MP has told the PTE how to do their job. They would have never known otherwise!

He has also written to Tate's complaining bitterly that they did not give enough notice of going bust. 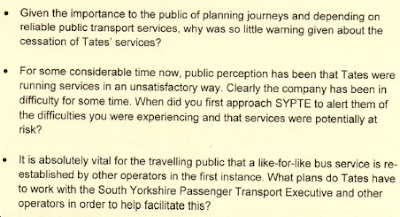 Clearly the MP does not understand how going into receivership works or why it happens. With no money or staff available, planning the succession is an unlikely priority!

Perhaps, more significantly, he has railed against the whole system of bus provision in the UK; a party political point which, none the less, does have some value. But does our retail sector need government intervention to "do something" about empty shops in Elsecar? Their closure also brings hardship.

Perhaps of more interest to omnibologists is the picture used by the Barnsley Chronicle to illustrate the demise of Tates. 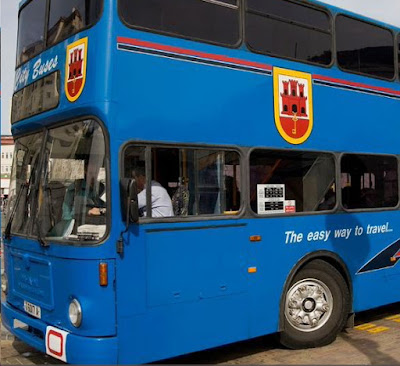 It is possible that investing in left-hand drive double-deckers for a "City Buses" branded Barnsley Sightseeing tour was not the best business model? Maybe a blog reader can identify the vehicle?

Island Improvements Illusory?
The following article has appeared in a recent edition of the Island's County Press newspaper. 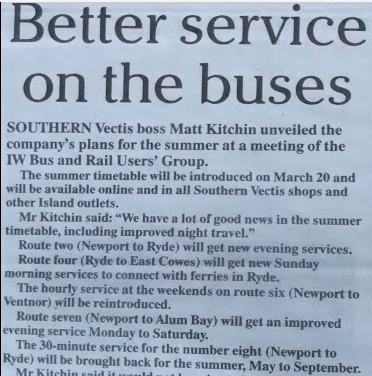 True, these development do represent an improvement over the current "Winter" schedules; but generally they are only re-instating frequencies that have been chopped in recent years. It is beginning to look as if the Island is reverting to a Summer and Winter timetable as in days of old.

Will Southern Vectis revert to its unique fares deal whereby proces were cheaper in the Winter and boosted in the Summer to make extra profits out of the tourists?

They Should Have Oiled It 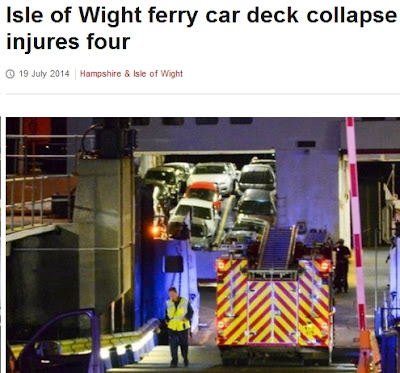 In July 2014 the mezznine car deck on St Helen, the oldest of the Wightlink car ferries plying its trade between Portsmouth and Fishbourne. This deck consist of two large planks of steel hinged in the middle. One half is lowered to load cars then riase back to horizontal. On arrival the other half is lowered to allow disembarkation.

When not requeired at slack times the whole deck can be winched up to the ceiling and out of the way. There may be a more approporiate naval term for "ceiling"!

Anyway, something twanged and one side of the lowering ramp fell out of control to the "floor". The injured people were bashed about in their cars.

So why a blog nearly two years late? The report on the accident has just been published and it is not good news. 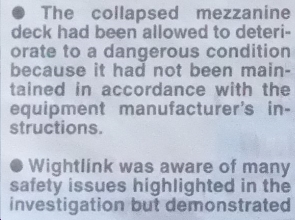 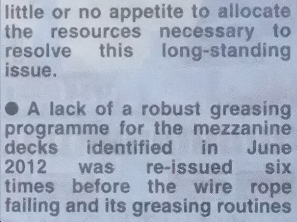 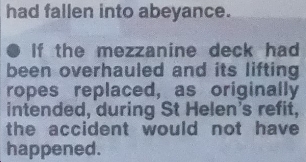 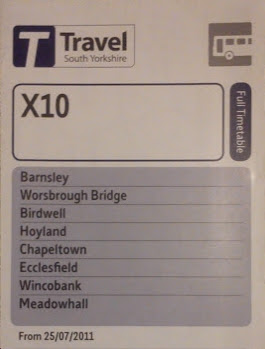 Once upon a time and not long, long ago, South Yorkshire Passenger Transport Executive produced printed timetables for every bus route in the county. Then in a cost cutting exercise and from May last year, they decided that publicity would only be "on-line" and available on a self service basis.

This was a huge disaster in November last year when the Sheffield Bus Not Very Partnership came up with and ill-thought-out network redesign "to improve connectivity" (blatant lie); in fact to cut servies throghout.

The publicty was execrable, atrocious, paltry, indequate, inaccurate and in a word ****. See "Partnership or Pottiness" (read again)

There were changes at the beginning of January and at the end of January for which publicity was poor and late or non-existent.

There were more changes on 7th February and fbb's bus watchers in Sheffield were not hopeful of any improvement. But this is what John wrote:-

I called today (Monday 9th February) at both Arundel Gate and Sheffield Interchange.


fbb checked the date and it wasn't April 1st, at least not down south in Seaton it wasn't! He then checked the email, perhaps it was a dream? Had fbb read "First Bus" in the same sentence as "leaflets", "maps" and "fare tables"?

This needs more investigation so the chubby one has asked for a full set of these potentially show-stopping marvels to be hot-footed from t'North to t'South.

More will be revealed soon!

Thanks also to our senior Isle of Wight correspondent for the Vectensian snippets.

Next bus blog : Friday 12th February
Posted by fatbusbloke at 02:00