How to Ruin a Bus Service - The W.I. Complains 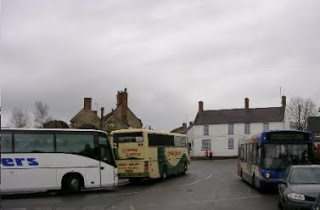 The interchange at Silverstone, often with no spare time .,.

... and forcing an hour's wait according to Transport Defunct (now defunct) ... 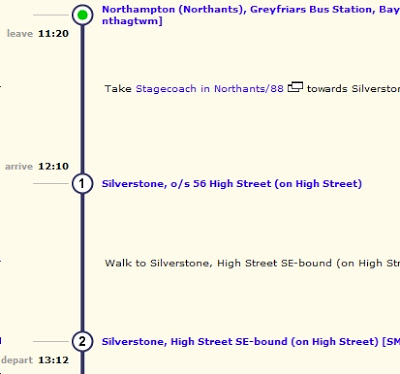 ... meant that the bus riding county set of Northamptonshire were far from happy with their lot, should they choose to travel between, say Towcester and Brackley. Such was the disgust that none other than the Womerns' Institute at Towcester opening their piggy banks and went for a ride. fbb has summarised their conclusions below.

Surprisingly, for Towcester Evening W I, they braved daylight for their exploratory jolly back in 2011, seen here waiting at Silverstone. 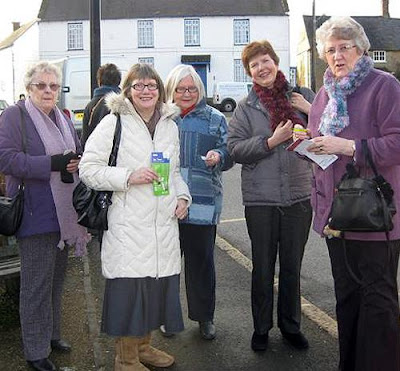 Since Towcester Evening WI first expressed their concerns regarding the new X88 bus service from Northampton to Oxford, meetings have been held with Towcester Town Council, NCC Councillor Rosemary Bromwich, and NCC Principal Bus & Rail Development Officer John Ellerby. WI members were able to expand on their views regarding the lack of consultation from NCC on the changes to this service and the unsuitability of the interchange at Silverstone between the two operators.

Recently six members of Towcester Evening WI ventured out together to experience part of the new service as far as Brackley. They saw this as an opportunity to experience 1st hand the interchange between Stagecoach and Walters Coach services at Silverstone.

The return ticket from Towcester to Silverstone was £3.70. The Stagecoach bus was very comfortable; a ‘lo-liner’ bus with a step-free entrance; room for buggies and wheelchairs. The driverthat during the snow, Walters Coaches did not always turn up at Silverstone for the return journey so he brought many passengers back to Towcester on his bus.

We alighted at the bus stop in the centre of Silverstone to cross the road to wait 10 minutes (thankfully it was a fine day) for the Walters coach to take us on the remainder of our journey to Brackley. 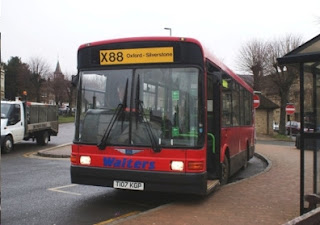 This proved to be on time but was an old bus that reeked of diesel and was not particularly clean. The driver also appeared to be having difficulties with the gears so this part of our journey was not particularly pleasant. The only saving grace was that the ticket machine was broken so our fares were waived!

(Since our journey we have heard that this Walters bus we were travelling on broke down before it reached Oxford and the passengers were stranded in a rural location for 2 hours!)

On the return journey from Brackley we had a more pleasant experience on a smart Walters coach. 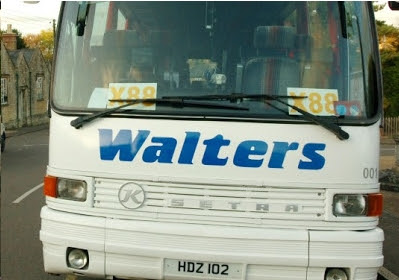 However, this coach would not have been accessible for passengers with buggies and wheelchairs. Luckily again, the ticket machine on this coach was not working either so passengers did not have to pay for this part of the journey. The return fare on Walters’ services from Silverstone to Brackley is £4, resulting in a total of £7.70 for the entire return journey from Towcester to Brackley.

Following our experience we would like to make the following points:
Any interchange should be at Towcester
where there are suitable shelters and facilities
Consideration should be given to a direct bus service
from Towcester via Brackley to Oxford and return, at least once a day
NCC should investigate the condition of vehicles used by Walters
NCC should ensure access on the buses for people with disabilities
NCC should ensure that there is a through ticket system for the entire journey


Not much to ask, is it, dear ladies? They continue:-

We consider ourselves to have been very fortunate in our little venture as we had heard of many tales concerning passengers becoming stranded at Silverstone.


If NCC can address our concerns and improve this service Towcester Evening WI may be able to encourage more residents of Towcester to use it; otherwise we fear that the use of this service will decline when the Government are actively encouraging us to leave our cars at home, use public transport, and thus reduce carbon emissions.

Several chocolate peanuts and a rousing hip, hip huzzah for the "dear ladies" of Towcester Evening WI. If more groups experienced the real world of bus travel and campaigned on that basis, more notice might be taken. Well done ladies, a big step forward from "Mrs Hortensia Smythe will give a talk entitled 'twenty things you could do with an old biscuit tin'".

And the service did change with through journeys restored. Here is what it became (click on the timetable to enlarge):- 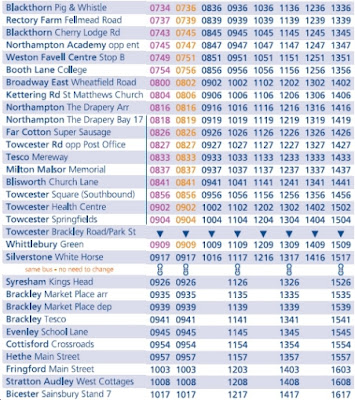 It is all numbered 8. No minimalistic pretence of "X"!

Stagecoach Northampton's use of colour for Monday to Friday and Saturday timetable variations is not good for those with poor vision but all can see that buses now run through at Silverstone every two hours. There is no service now to Oxford, but the link with Bicester could be useful for shoppers. 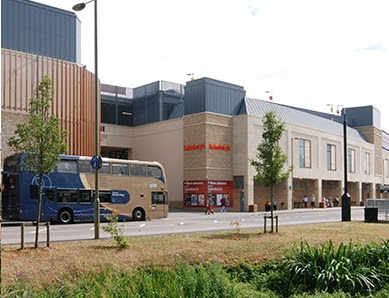 So everyone is now blissfully happy; maybe not blissfully happy, but more happy. Maybe not more happy but perhaps a little less unhappy. If you want to get to Oxford from Towcester or Brackley you will need to change at Bicester. 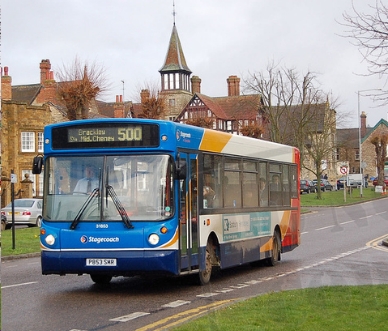 Or you could take the 500 to Banbury and go by train.

But their happiness, however weakly blissful, is about to be smashed to smithereens. Remember this doom-ridden announcement from Yesterday's pre-Walters pre (non)interchange at Silverstone blog?

"The section from Northampton to Silverstone is commercially viable because we can provide an hourly frequency with two buses. If we go on to Brackley we shall need a third bus and some subsidy."

Can you guess what the proposal on the table is?