As with the outward journey, fbb used the National Rail journey planner (jp) as a first port of call. There is a great outpouring of engineering work everywhere and the jp is a start. Option 1, after the morning service taken by fbb and Mrs, was to use the car ferry, a simple 5 minute stroll from the front portal of eminent ecclesiastical edifice to the terminal.

But the answer that came was perplexing. The next trip after 1300 was ...


... a journey of twelve hours and six minutes arriving at Axminster just after 7.30 this morning. This did not seem exactly what fbb and the Mrs wanted or would tolerate. But it was EXACTLY what the jp offered. Fortunately a click on "earlier trains" took the chubby blogger back to something that looked a little happier.

It was till longer than the outward run by about an hour, so needed further investigation. 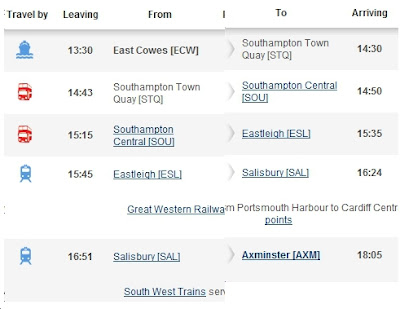 (click on the schedule above for a better view) There would appear to be a bus from Southampton Central to Eastleigh to connect with Great Western Railway (First Great Western in a thin disguise) train to Salisbury for an onward connection to Axminster.


An alternative would be a trudge across the floating bridge and on through West Cowes and to the fast Red Jet service. What would this offer for a departure after 1300?


Super and smashing. Another overnight trek! Ah; but fbb was becoming wise to the incompetent ramifications of the jp. Look for earlier journeys as above. Seemples?


Wowsers! Leave 15 minutes earlier than the car ferry and arrive in Axminster a whole TWO HOURS earlier. Fantastic! Only it was a lie and a delusion.

The journey planner is utterly and completely WRONG, INACCURATE, FALSE, USELESS, NO GOOD, A JOKE, FARCICAL and just a tad misleading.

Using fbb's internationally renowned knowledge of what things should be, he calculated that going from West Cowes would also involve a bus to Eastleigh and would save one hour not two. Modesty forbids fbb from reporting who was right, but it wasn't the journey planner.

In the end the fbbs decided that a trudge to West Cowes in drizzle was less attractive than a cup of coffee and/or tea from the deserted but open "Steam" hut at East Cowes ... 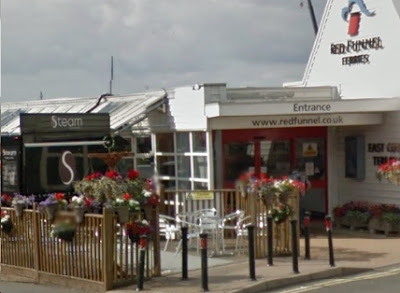 ... and a sit in the warm (inside!) until the car ferry arrived and loaded. The double bonus was the presence of hot meals aboard. 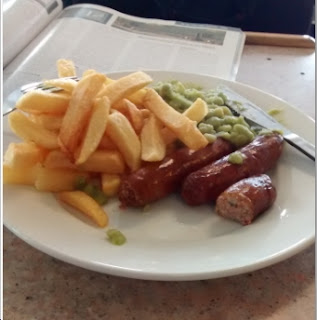 Sausage, chips and mushy peas did not come up to the standards of a Mrs fbb Sunday roast, but it filled a niggling gap.

Despite the utter shambles earlier in the week when it rained at Brockenhurst, everything went very smoothly. There were plenty of signs at Southampton Central ... 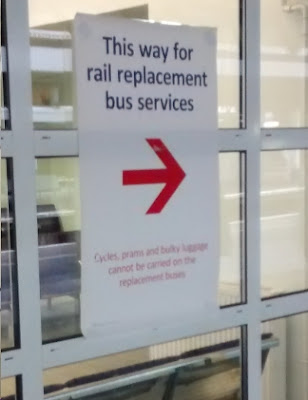 ... and a good bevvy of dayglo yellow clad helpers to guide passengers to the right bus. The signs on the bus screen were a help too; better than First's recent efforts at Exeter St Davids. 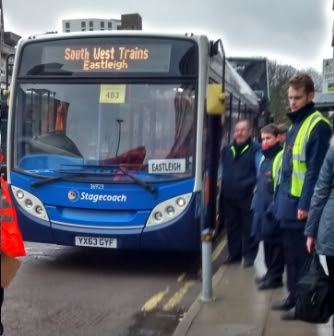 The special buses were also shown on the station departure screens; as badly photographed by your author whilst being chivvied by the good lady. 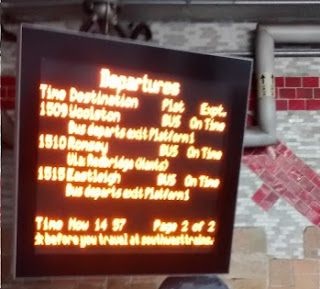 One minor moan, however. Southampton Station was utterly closed with not a cuppa to be had, despite hundreds of transient passengers waiting for a bus just outside the platform 1 caff. 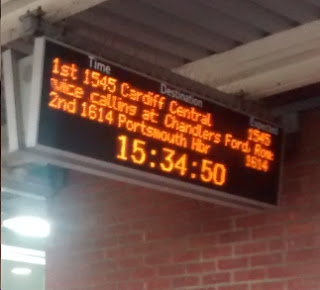 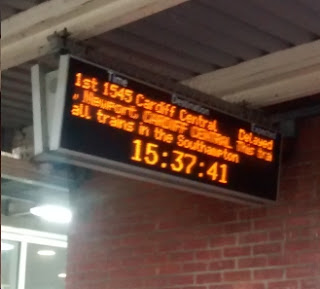 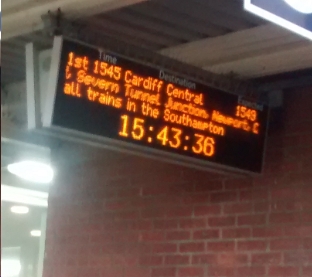 ... the computer had found the train and it was going to be 5 minutes late. Bearable. But was the computer changing its mind to keep us all on our toes? GWR left Eastleigh at 1553, ran via Chandlers Ford and was back on time at Romsey. Never assume that screens on the station are right; ALWAYS treat them with polite suspicion.

Thus it was that a cup of Pumpkin Tea at Salisbury ... 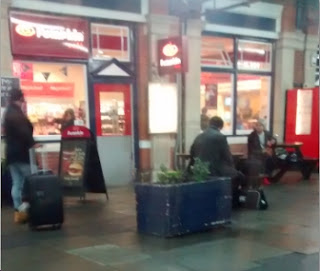 ... kept the old folks sane until arrival on time back at Axminster.

Despite the efforts of National Rail's technology, the engineering disruption was well handled on the ground. Perhaps because this particular diversion has been a regular delight of the Southampton area in recent months, "the lads" have worked out how to get it right.

Congrats all round (but not to the little leprechauns inside the National Rail computer.) Perhaps they were bemoaning the sad demise of the lovable Terry Wogan? 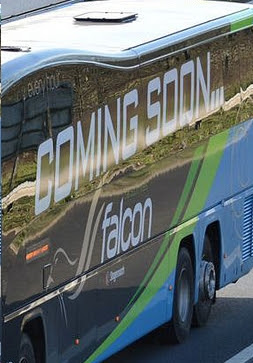