In his recent articled on Stagecoach's new South West Falcon, fbb expressed concern about the "tight" running time and the problem of heavy traffic in Bristol. A blog comment writer emailed this sorry tale:-


Thursday 18th Feb' Falcon was travelled on by friends of stringer's wife. Outside the Bristol Aquarium stop they were fired on by what has been taken to be a BB gun. 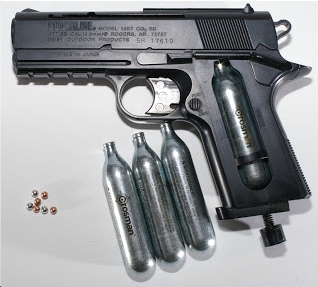 BB guns are a type of air gun designed to fire spherical projectiles similar to shot pellets of approximately the same size. Modern BB guns usually have a barrel with a bore and caliber of 4.5 mm (0.177 in) and are available in many varieties. BB shot for modern BB guns is usually steel, plated either with zinc or copper to resist corrosion, and measure 4.3 to 4.4 mm (0.171 to 0.173 in) in diameter. 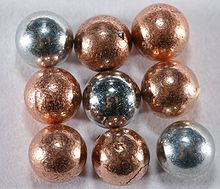 
Police called, door broken, end of journey for that coach!

Intrepid travellers came back on 1745 from Cabot Circus stop (aka the Fabric Shop stop). 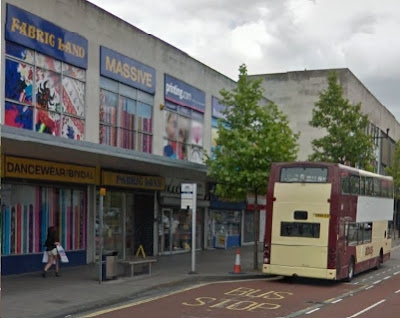 Horrendous traffic out of Bristol meant an enforced 45 minute wait at Bristol Airport for driver to rest due to "hours".

The airgun incident could not be predicted, of course, but scheduling the service tightly IS a problem. Working the route from Plymouth means that getting a spare member of staff to cover the drivers' hours crisis is very tricky such a long, long way from home.

When Stagecoach introduced its Belle's Express from Gloucester to North Bristol, knockers were ready to heap criticism on the company for being an insult to women. Apparently the ample bosomed air hostess style decoration was "offensive". 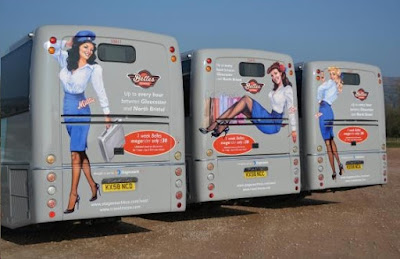 Persons thus endowed were not routinely seen in the flesh!

The service started with nine round trips. (click on the timetable to enlarge)

Peak journeys on Monday to Friday served workplace and uni sites, with-off peak and Saturday trips taking excited shoppers to Cribbs Causeway for their injection of retail therapy and over-priced coffee and buns. But, it would appear, not enough excited shoppers.

But from a week ago The Belles are sounding significantly less plangent (look it up!) ...

... with Cribbs Causeway crossed but once and the coaches now trundling into central Bristol.

Whilst the line is much-loved, it is not much used. Reputedly it has the highest subsidy of any rail line in the country.

The existing trains are held together with gaffer tape and fish glue and are desperately in need of replacement. 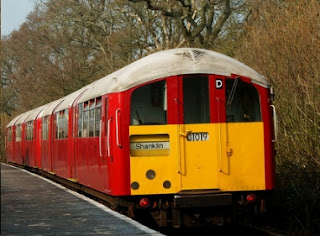 National Rail wants to get rid of the line by forming a community interest company. Local headlines reveal a long drawn-out fracas politically. 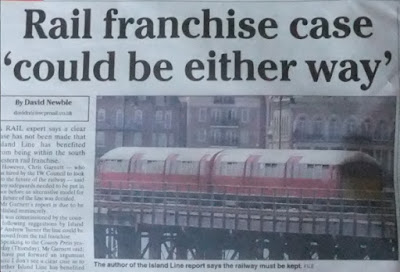 But the Isle of Wight Council has had an idea.

That is bad news!

It is added to the list of ideas that include: a disastrous public-private partnership for (not) repairing the roads and a brand new welcome to tourists policy of closing and selling off all public conveniences.

The results of the sale of toilets might just buy half a tram and a 100 metre length of overhead wiring. But if you want to promulgate a potty policy, call in a big name to write a report. But make sure the writer comes to the conclusion you want. 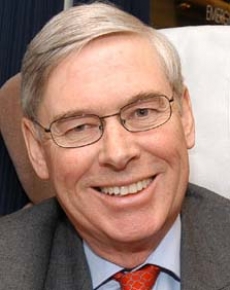 He agrees with the Council. What as surprise as they have paid him! Here are a few extracts from his report.

The line is said to have revenue of about £1m and in the most recent release costs have risen to about £4.5m per annum. It is difficult to see how, under the present structure and arrangements for operating the existing line, costs can be significantly reduced.

The other major issue for the IWC is how the franchise will be operated. The IWC does not believe, even with the hoped for reduced costs of a tram operation that IWC could run it.

It will be necessary to ascertain that, if the track level in Ryde Tunnel is reduced to the level it was prior to the introduction of the underground stock, trams could pass through and have enough room for the catenary.

SNAG 3 : When will Ryde Pier fall down?


The condition of Ryde Pier is not known, but according to Wightlink no work has been carried out by Notwork Rail (NR) for a long time. However in discussion with NR it appears that work was undertaken on the Pier around 3 years ago. This work involved strengthening the deck of the Pier. This needs to be clarified.

The Island franchisee could well be operated by one of the existing train operators but through a tram subsidiary rather than rail subsidiary and would need its own operators and engineers.

Conclusions? Too many uncertainties. Too little money. Passenger numbers transferring from the Wightlink ferry are insignificant these days. Here is Ryde Pier 50 years ago. 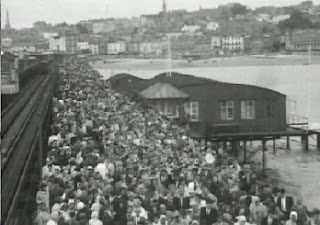 Unless someone can come up with the money, would it really be that big a disaster if the line closed?

fbb will now be a marked man. 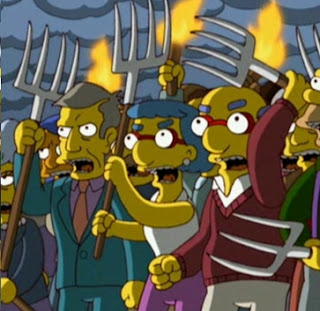 Of course, if the line is really essential, then Island people may have to pay for it. Anybody got a spare three million?


Next bus blog : Monday 22nd February
Posted by fatbusbloke at 02:00