Yes, We Have Leaflets : If We're Lucky 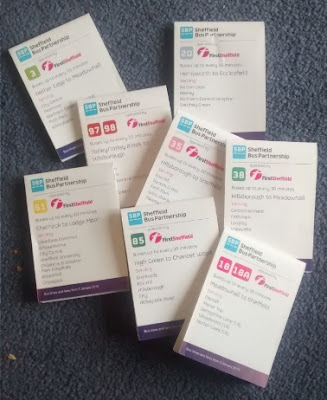 There may still be a few readers of this blog who have been away on a package holiday to the planet Zog; but most will know that things are chaotic in Sheffield. For the Zog visitors, we are reminded that the Sheffield Bus Partnership threw the city's network up in the air and attacked it with a giant threshing machine. Cross-city routes were unlinked, relinked and renumbered leaving the populace confused and angry.

To add to the chaos, many of the schedules simply didn't work and buses were running up to 40 minutes late on a regular basis.

The 7th February revisions marked the THIRD attempt at timetable tinkering; and in a few cases, the THIRD version of a route's timetable.

Previously, publicity had been atrocious and, in some cases, simply non-existent; as headlines revealed locally soon after the changes. 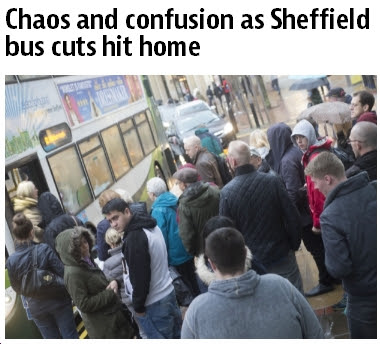 How have things gone, print wise, for the February 7th change?

We need, first, to grasp the problem. The "Partnership", actually a poorly contrived device to cut services, consists of Sheffield City Council, South Yorkshire PTE, Stagecoach and First with a minority input from other operators.

Leaving aside the "others", there are three types of operation in the city.

3. Routes where First and Stagecoach operate in glorious harmony. But this harmony is a ruse and a delusions. The services are NOT jointly operated. It just so happens that Stagecoach and First choose to run along the same roads (mostly) and at sensibly co-ordinated times.

How does this affect publicity?

Our sleuth found the First Bus set illustrated above in the week following the change. He does not think they were available in advance.

Revised printed timetables should be available at least two weeks prior to any change AND AVAILABLE WIDELY.

He found a few (not all) of the Stagecoach routes at least a week late.

Of the joint routes, nothing has yet appeared. It is TWO weeks after the change and THREE weeks after the absolutely last date that publicity should have been available.

Even the best of a very bad lot, these First miniatures, are better than nothing; but not much better!!

The leaflets are dated wrongly.

The headings can be misleading. 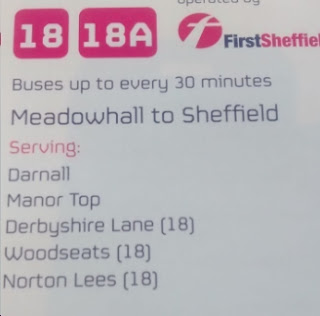 You would be sadly disappointed with a sixty-eight minute journey time between Sheffield and Meadowhell when you could get there in twenty!

Some of the time point blobs are in the wrong place. 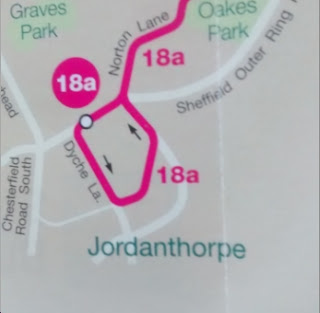 The Fosters, a tower block at High Green, was demolished in 2012. 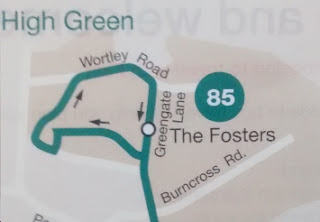 Here it is; almost gone. 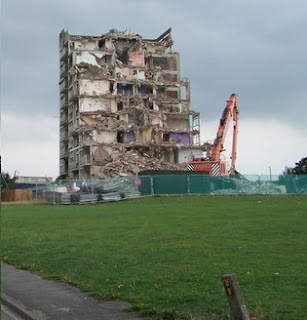 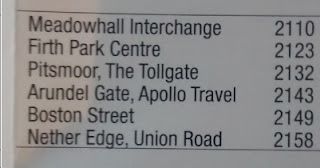 And, O dear, O dear O dear! fbb is not a footy fan, but even he knows that Sheffield United ... 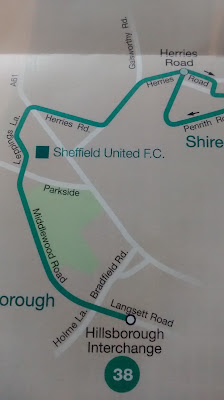 ... does not play the beautiful game at Hillsborough.

The timetables themselves are standard First products and often give inadequate detail. 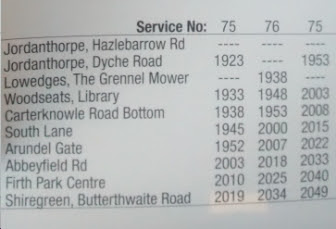 All 75s serve Hazlebarrow Road, so why are there lines of dashes? The routes of the 75 and 76 between First Park and Shiregreen are very different, shown correctly on the map admittedly, but surely some reinforcement is necessary with times showing the alternatives. It is all too easy to make mistakes.

But let's be positive. (fbb must be mellowing as he enters his 72nd year - surely not?). We do have maps, even if they were drawn by people in London (FWT) who don't know where the buses run.

And we have FARES!

Wonders will never cease. Hooray. Break out the Bolinger. Give that man a peanut. It's almost unbelievable. 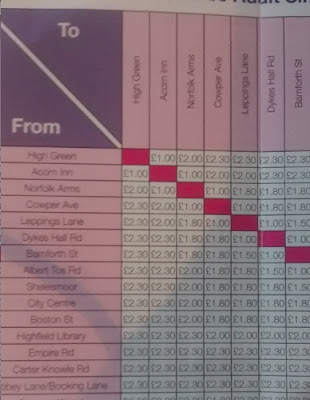 Now, because we are part of the Partnership, this exciting development will be repeated with Stagecoach only leaflets? And with the non-join joint services?

Why haven't joint service leaflets appeared? This is what an anonymous spokesman said in response to fbb's query.

I think, unfortunately, because of Xmas (only eight weeks ago - fbb) and the regularity of changes to get things right, they are a bit behind.

The shared route changes (such as 7/8/8a, 24/25) go through a slightly different process to our own services.

In fact First and Stagecoach are incapable of glueing "joint" services together so they have to pinch data from the PTE; and we all know how good that is!

So the "Partnership" produces leaflets in three different styles, issued on three different dates with three varieties of information, stop names etc. all presented differently. And they are ALL late.

STOP PRESS : An email from our Sheffield Sleuth received at 1527 yesterday:-

Next "blunderbus" blog : Saturday 20th February
Posted by fatbusbloke at 02:00