Where does this bus go? 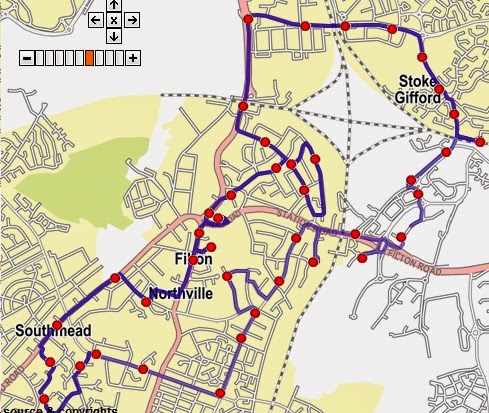 Having rejected the "pen map" and been less than impressed with the "dotty" Traveline offering, fbb then turned to the button labelled PDF.

This produces a prettier version of the above; but the road names are still obscured by the route colour; not blue, but a fetching shade of magenta. The dots now have names which are too big and enlarge and contract as the PDF is shrunk or blown up. We still do not know which way round the us goes!

And there are other mysteries. 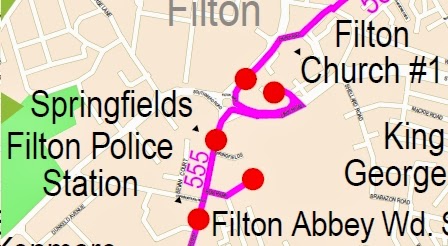 Does the 555 really double run up that dead end road to the left of "Church"? 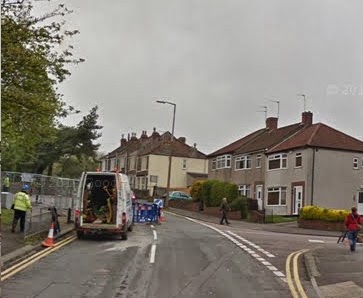 Seems unlikely. Even less likely is another double run up a cul-de-sac to serve a few industrial units on Elm Park. 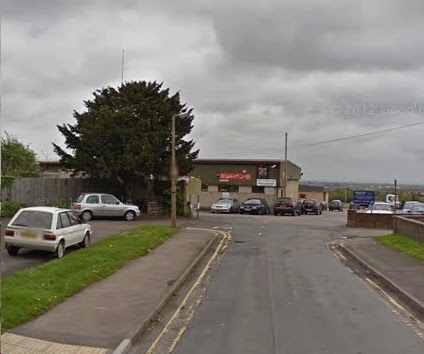 Or perhaps the Traveline minions have no idea where the bus goes, leaving it to some convoluted computer system with data derived from the devilish NaPTAN.

More seriously, however, does it go into the Retail Park at Abbey Wood ... 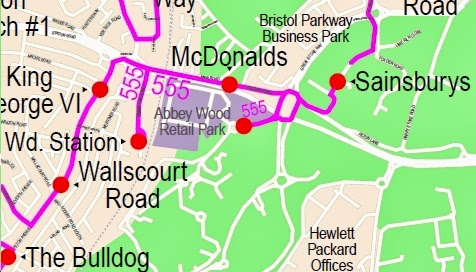 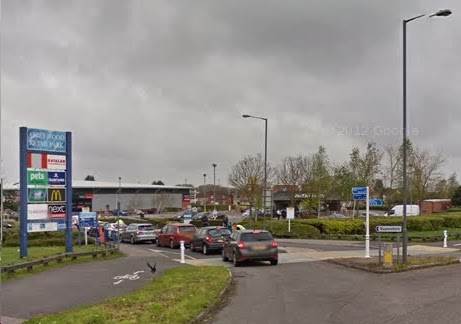 ... or are people dropped at the bus stop labelled McDonalds on the Traveline PDF? 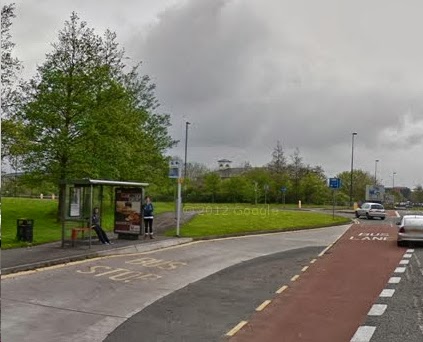 Information is inconclusive. Presumably regulars will soon get to know, even if a newcomer is befuddled! The rather "basic" leaflet from bus operator STL (Servernside Transport Limited) suggests hat some of these wiggles are not served. 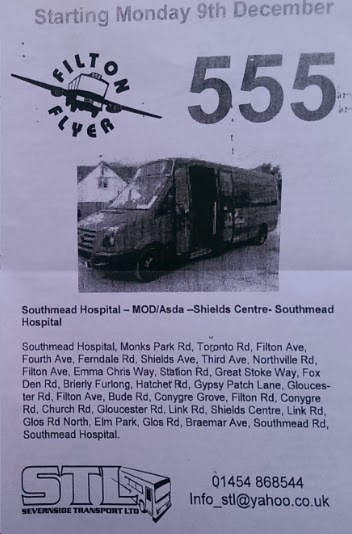 If that is true then it's full marks to Traveline (again!) for misinformation.

Talking of Severnside's leaflet; they show each journey separately, eschewing the usual time table. There's nothing intrinsically wrong with that; it certainly avoids a slip of the eye onto a neighboring column, BUT each journey has a different set of timing points:- 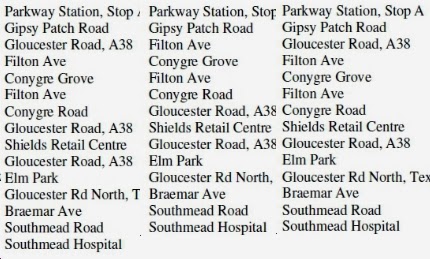 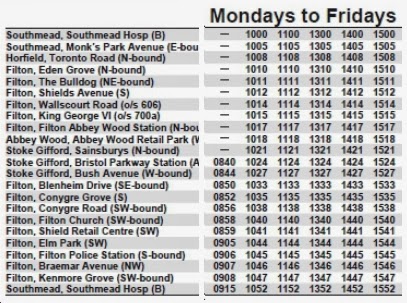 ... as long as you know which Filton is which! fbb is sure that all these repeated place names simply don't help. What's wrong with "Filton Chuch" instead of "Filton Filton Church"? Do we really need to know that Bristol Parkway Station is at Stoke Gifford? 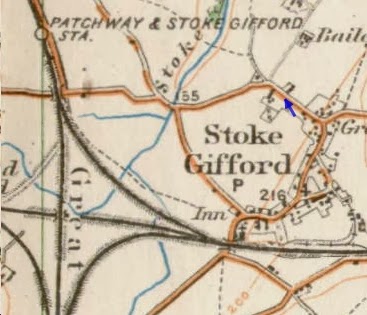 You would get a good trainspotters view from the church tower! 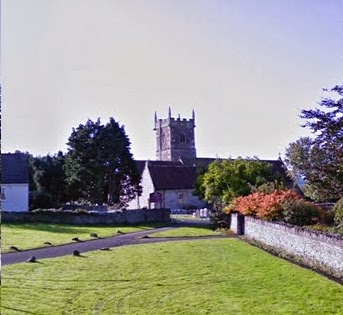 It's quite hard to find the original Stoke Gifford village; but Traveline insists that everywhere must have a "correct" locality name, however misleading it might be to that rare of rare beasts, a genuine enquirer.

fbb must remember to keep his eye open for a Traveline stop outside (o/s) No 700A, because somewhere in the vicinity there is Filton (again?) King George VI, presumably a pub. 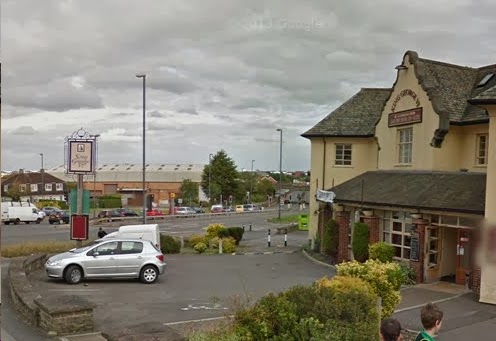 Yes, there it is. Now all we have to do is find No 700A, possibly on Filton Avenue - perhaps, Traveline is coy about the road name. 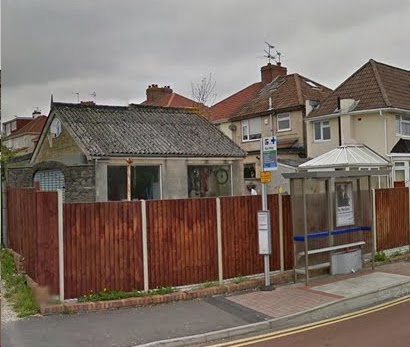 Thanks Traveline for helping us all to find our way round Filton! 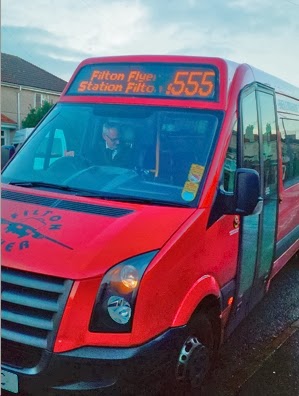 Nationally, community buses have had a mixed history. On the Isle of Wight, for example, the grand (and award winning) scheme whereby Southern Vectis "managed" a batch of such routes (using volunteer drivers) has sort of fizzled out. Most are now ordinary services supported by funding from the Council. One of the "communities" that refused the Vectis deal, Freshwater's "FYTbus", remains stoically independent and successful. A mixed bag; a pattern reflected in the community bus business nationally.

Only time will tell if the Filton Flyer 555 will have a long term future. But it might be a better future with a bit of better publicity. Fortunately, the Filton "Community" is unlikely to refer to Traveline!

The 555 serves the Coneygre area of Filton.

Coneygre? There's one in Tipton (West Midlands); there's a Conygre Farm near Hoveringham in Nottinghamshire. There are also plenty of Coneygrees and Conyegars. Amazon have no stocks of a book called "The Conygre Story" (and no picture of the cover, either).

So, who, or what is Coneygre? 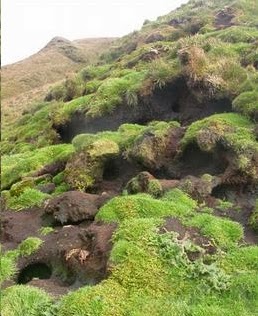 The clue is "coney", an old name for a rabbit. A conygre was a name once used for a rabbit warren.


Next bus blog : Thursday 6th February
Posted by fatbusbloke at 02:00