A Doddle to Dawdle to Dawlish [3]


fbb is exploring the provision of replacement buses to cope with the storm damage at Dawlish. Despite a line of containers to protect the site and concrete sprayed to strengthen the bank ... 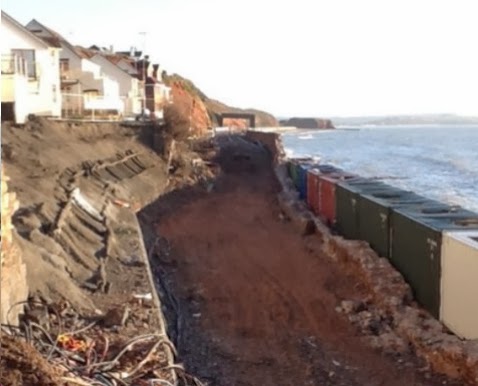 ... there was further damage on Valentines day and Network Rail have extended their estimate for repair time. It looks as if Mr Fearley's fleet of between 140 and 200 hired-in coaches will be working for up to two more months.


fbb has spent a hour looking and lunching and joins the late running 1154 to Newton Abbot. The coach and the road it rides along follows the railway line via Teignmouth. The views from the road are almost as good as those from the railway. 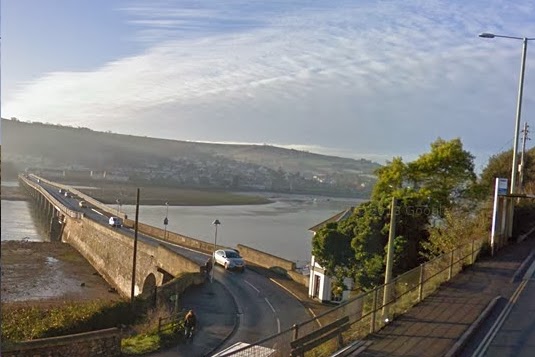 Our scheduled stop at Teignmouth station produced quite a gaggle of customers including two push chairs and contents assisted by a helpful gaggle of First staff. 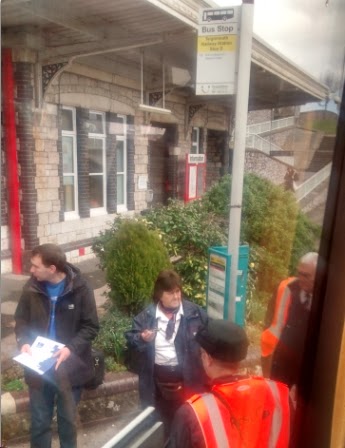 In planning the day, fbb was beset by a problem. Information about replacement coaches was relatively easy to find ...

... but timetables for the remaining train services were difficult, if not impossible, to obtain from the confuser. Presumably you were expected to use the journey planner as there is a trend on web sites to push the planner and only offfer downloadable PDF leaflets. So from Newton Abbot to Plymouth it was "suck it and see." 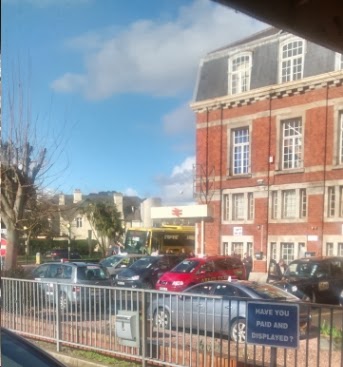 ... and there was a sleek HST grumbling gently in platform 3. 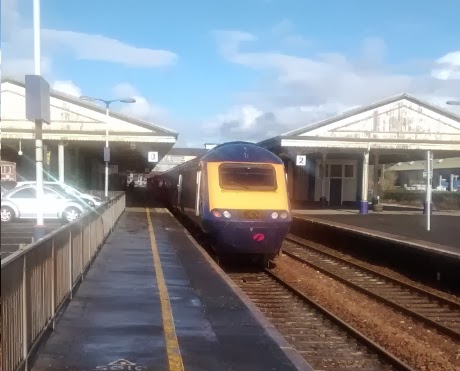 A helpful First citizen informed fbb that it would leave at 1300; advice reinforced by the electronic displays. 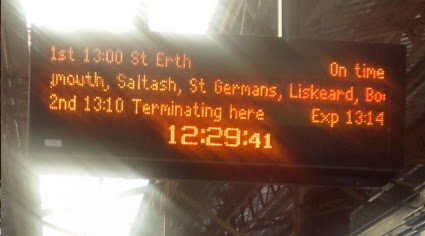 But it is only going to St Erth and not all the way to Penzance, presumably yet another weather problem. But here we meet a difficulty with "clever" electronic confuser driven systems; there was nothing on the screens to tell passengers how to get to Penzance! How many might decide to wait for the next train in deeply forlorn but unrequited hope? Likewise the otherwise helpful loud-speaker announcements offered scant comfort for customers continuing to coastal Kernow.

So fbb grabs a station buffet-supplied cuppa plus Eccles cake and settles down to wait for the 1300 departure in coach D.


Coach D had 7 people in it; the rest of the train was equally sparsely furnished with paying customers. But this gave the chubby one a chance to experience the seat back entertainment referred to in yesterday's blog (read again). Tragically Robot Chicken was no longer available.

fbb was disinclined to shell out £1.75 for a set of headphones so amused himself by watching an episode of ... 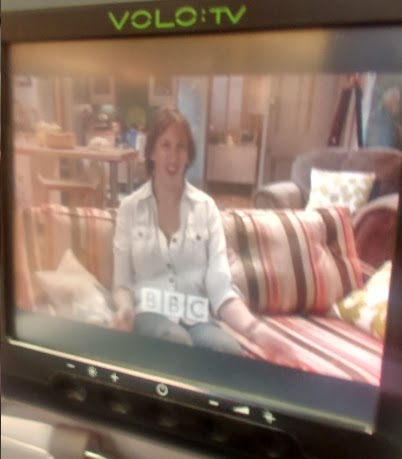 ... Miranda in total silence. He watched the whole episode because, once started, there appeared to be no way of "changing the channel." No-one else in the carriage was using the facility. There were pages of engineering work announcements although nothing about St Erth to Penzance. 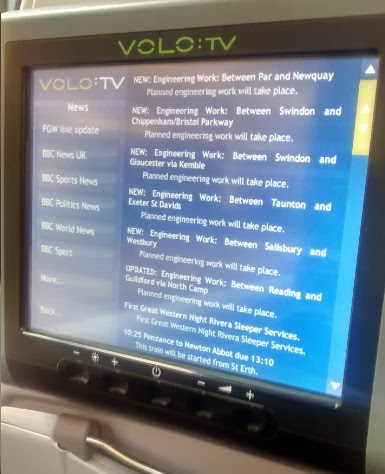 Most entertaining was a screen showing the progress of "yer actual" train. A little blob moved along the line of the track ... 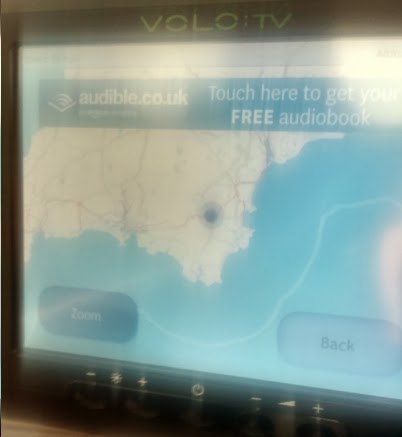 ... and it showed speed and, usefully (?) height above sea level. Even this stimulating entertainment ceased to stimulate after a few minutes.

fbb's original plan was to catch the 1445 non-stop coach back to Exeter but stepped back to the 1345 which was waiting, champing at the injectors and ready to depart. The vehicle was "tired" and the windows were a tad on the grubby side ... 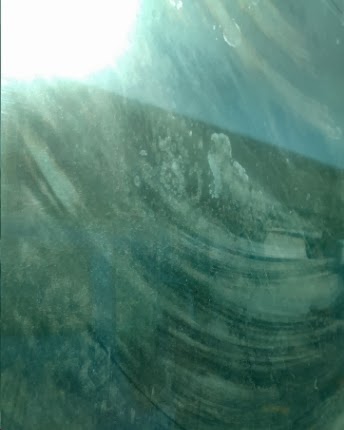 ... but a goodly load sped happily to Exeter. Arrival was, however, 15 minutes late due to heavy traffic approaching the the city centre. Once again, staff were on hand to help the confused and anxious, but most people seemed to know what to do; indeed most trotted off to the town or to the car park.

And talking of dirty windows ... 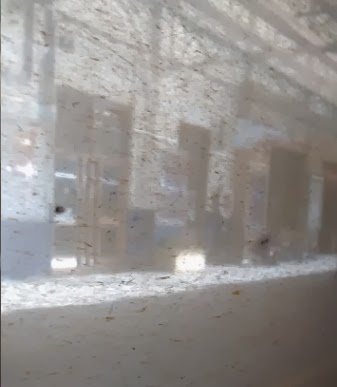 ... the SWT diesel unit appeared to have enjoyed a recent mudbath! Whatever happened to the be-overalled man with bucket'n'brush whisking along the platform to decoke the fenestration?

But fbb has left the best bit till the end. On entering the station lobby, this  wonderful sight  greeted the old man:- 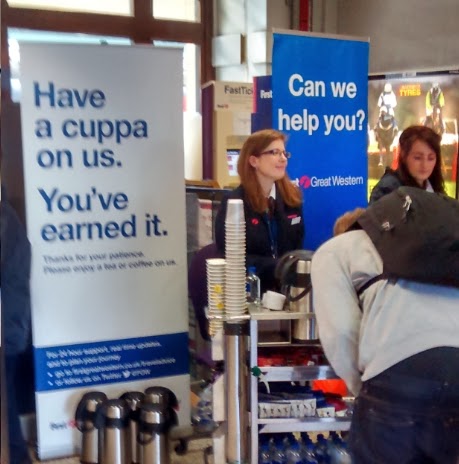 
Full marks for valliant efforts to get services up and running; full marks for a well-planned and executed replacement coach set-up and even fuller marks for the free cuppas at Exeter. It gladdens the heart as well as warming the cockles thereof. 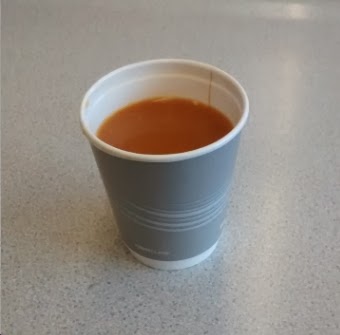 Next bus blog : Monday 24th February
Posted by fatbusbloke at 02:00