All at Sixes and Sevens 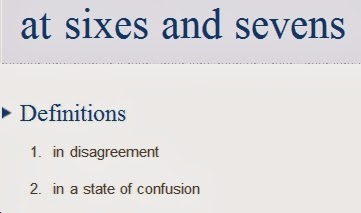 The phrase probably derives from a complicated dice game called "hazard", where certain scores were considered risky and to be avoided.

A similar phrase, "to set the world on six and seven", is used by Geoffrey Chaucer in his Troilus and Criseyde. It dates from the mid-1380s and seems from its context to mean "to risk one's life."

William Shakespeare uses a similar phrase in Richard II (1595), "But time will not permit: all is uneven, And every thing is left at six and seven."

The phrase is also used in Gilbert & Sullivan's operetta H.M.S. Pinafore (1878), where the captain, confused as to what choices to make in his life, exclaims in the opening song of Act II, "Fair moon, to thee I sing, bright regent of the heavens, say, why is everything either at sixes or at sevens?"

Sunday's blog posed the question, "Who would want to run a railway company?" On fbb's former stamping ground, the Isle of Wight, things have been rough, weather-wise, with short notice diversions and cancellations on the buses and many days when the Island Line trains simply could not run ... 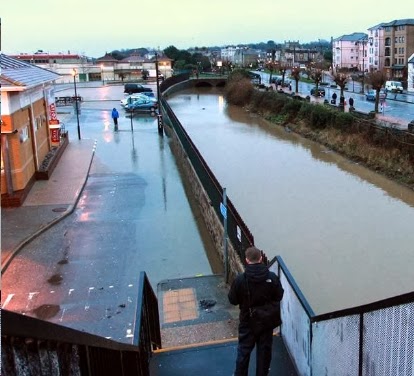 ... due mainly to the replacement of the trackbed at Ryde Esplanade by a deep, deep river. That's a tunnel up ahead!

The road to Seaview, whereat the former fbb towers floreat, was well inundated. 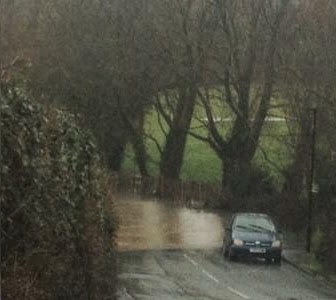 And this house on Seaview Esplanade ... 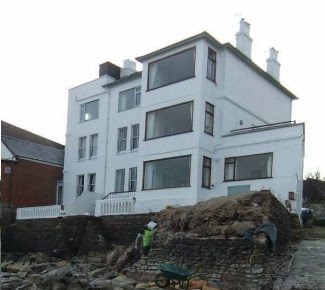 ... once had a luxury paved and ballustraded patio (above the builder's wheelbarrow). Even our Senior Isle of Wight correspondent waved a fond farewell to his delectable downpipe! 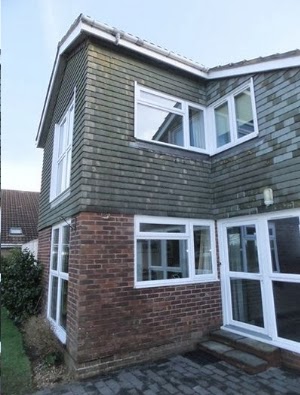 But we must not forget that, as the media circus moves on to its next crisis, the aftermath remains.

And along comes a major diversion because of road works at Yarmouth, West Wight. 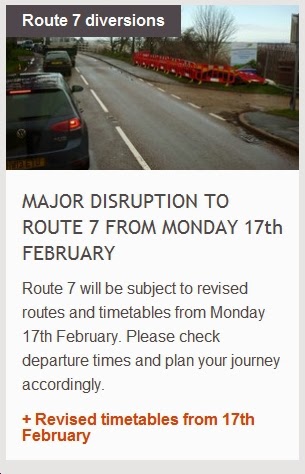 The closure calls for a complex diversion and a special timetable. The Southern Vectis web site is up front with a full description of the roads traversed on the diversionary route.

Bouldnor Road and Tennyson Road will be closed from St Swithin's Crescent to St James' Street from 9am on Monday, 17th February until 6pm on Friday, 4th April and diversions will be in place for route 7 during the closure period. All route 7 buses will operate via Wellow and Thorley and will not serve Cranmore.

The diversion for route 7 buses that leave Newport bus station at 10, 45 and 55 minutes past the hour will be Wellow, Thorley Street, left into Wilmingham Lane, right into Newport Road, right into Afton Road, School Green Road ...

fbb will not bore you with the full gamut of alternative thoroughfares. But another three "repeat" departures are listed with what looks suspiciously like the same route.

The diversion for route 7 buses that leave Newport bus station at 15, 25 and 40 minutes past the hour will be Wellow, Thorley Street, left into Wilmingham Lane, right into Afton Road, School Green Road,

By now readers with even a rudimentary knowledge of the Island will have furrowed brows of perplexity as they wrestle with the concept of six buses an hour to West Wight. Their wrestling, their perplexity, is well placed as a timetable extract will show ...

Ah, the consummate skill of the GoAhead webmasters! Interestingly, according to Google Maps, there is no road called Bouldnor Road on the Island; or anywhere else for that matter.

Ah, the comsummate skill of the GoAhead webmasters! Perhaps they didn't mean Bouldnor Road, instead they are simply describing the Bouldnor road; i.e. the road to Bouldnor. Except that the closed road doesn't go to Bouldnor. 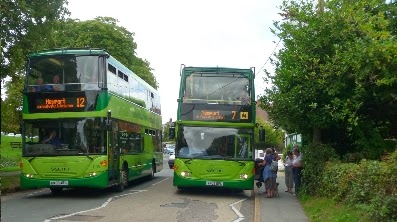 Once upon a time the 12 used to be numbered 7
as well as two other 7s!

Route 6 has a complex history. Once 19, 19A, 19B and 19C: once 10, 10A and 10B, it was all simplified as one simple route 6 from Newport, via Blackgang Chine to Ventnor. Then it was complexified by diverting half the service between Miton and Ventnor. 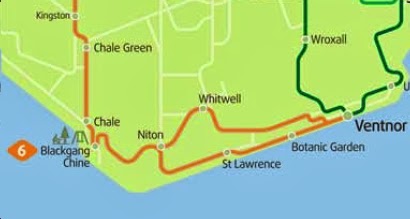 Then it was commumity bus-ised and daftly had some journeys with volunteer drivers which were free and others with Southern Vectis drivers that weren't. Then it was, effectively de-community bus-ised and, hey, all pay all day; hooray! Stability returned.

Until last autumn that is! 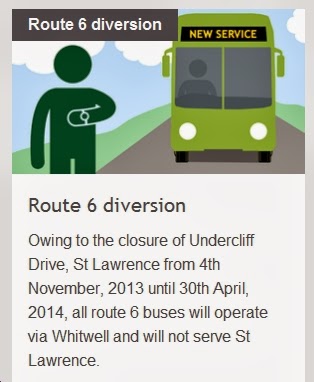 The southernmost chunk, via The Undercliff and St Lawrence, lost its service 6 as the through road was, once again, closed. This was to allow the new Private-Public road building consortium to rebuild the bits that had slid. 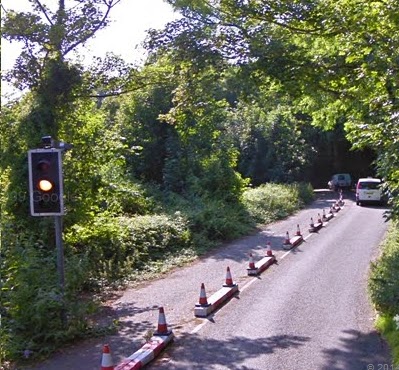 But it all changed last Sunday a bit further along the Undercliff Drive. This ... 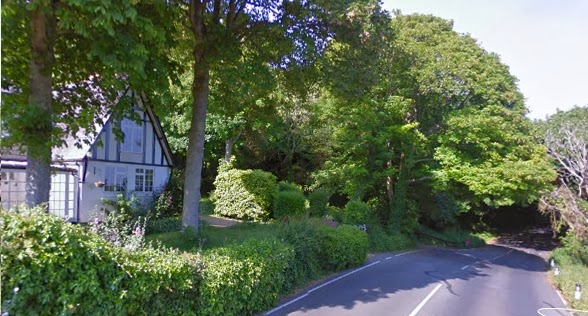 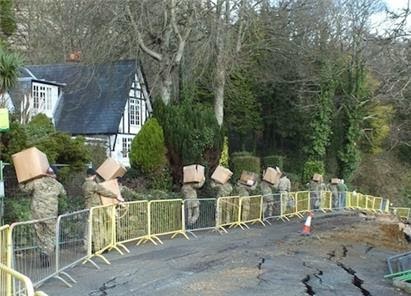 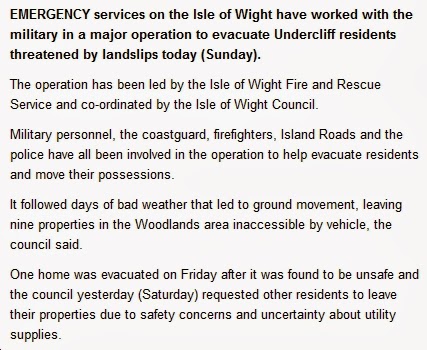 The question posed by our Senior Isle of Wight Correspondent is telling. Will buses ever return to the |Undercliff Drive?  How many times can you patch something like this? 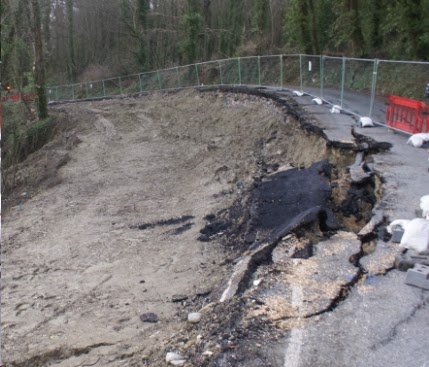 Who would try to run a bus company?

Meanwhile (inconsequentially) if you are a lover of bus stops, there's a fascinating BBC Magazine article (here).


Next bus blog (might be rail!) : Wednesday 19th February
Posted by fatbusbloke at 02:00