Or ... a little word puzzle to stimulate the brain on a Monday.


Many methods have been used (and continue to be used) to spur the public into ecstatic enthusiasm for a new or re-launched bus service. Obvious ploys like new livery, wifi, discount fares offers and leather (often plastic leather aka "leatherette"!) seats are joined by freebies and goody begs a-plenty. fbb still has his Stagecoach Gold pen from the Totnes launch (read again) and his vastly superior pen from Portsmouth's Star turn (read again)! 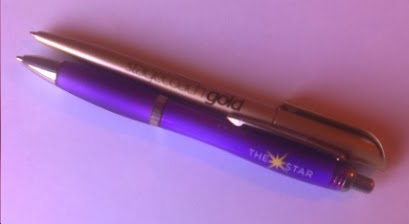 But this pen was different. 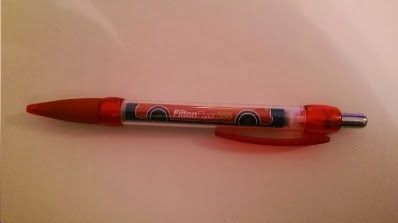 It lacked the apparent quality of First's purple provision and the obvious cheapness of Stagecoach's Totnes tat. This was pure seaside grot-shop at its best.

But what is that, hidden inside the bulky transparent barrel of this unwieldy writing instrument? Does something titillating happen when the pen is upended. fbb well remembers, in the days of is youth, being shown a risqué so-called "biro" where the barrel contained a "young lady" in one-piece swimming cozzie. Upon raising the pen to the vertical, the cozzie descended revealing a voluptuous naked nymph.

There was much sniggering in the boring bits of Latin "O" Level (which was most of the time!). And they are still available! 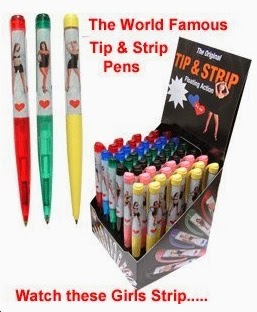 But a close examination of the present pen in question reveals the wheels of a motor vehicle and the words "Filton Flyer 555" within the gleaming plastic. 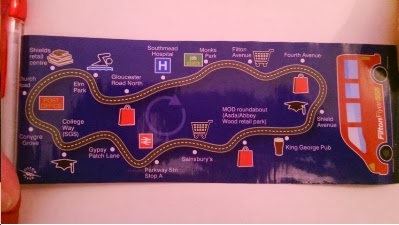 It purports to be a map of a bus route. Our Bristol correspondent, who kindly supplied the basis of this blog, wonders whether this is the "worst bus map and/or diagram ever produced." As well a playing fast and loose (very fast and totally loose) with Bristolian geography - of which more tomorrow - it has a circular arrow thingey which, you might expect, shows you which way round the bus goes. Except that the bus, on its one-way gyration, goes in exactly the opposite direction.

There is also a timetable; using the word is a very casual manner. 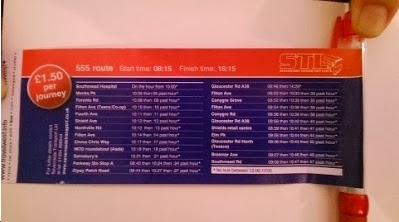 For example it reads "Filton Avenue 1014 then 14 past hour*" with the asterisk warning anticpatory passengers of the missing "14" at the driver's lunch break. As an "aide memoire" for regular riders it is OK but as an encouragement to new users it is less than helpful. The combination of diagrammatic wrong-direction map and limited-use timetable is, well, challenging.

But it does make people sit up and take notice, which is half the battle. 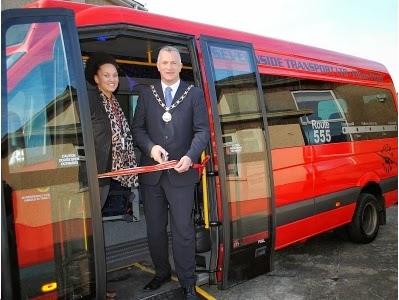 This intriguing community bus service was launched at the beginning of December complete with pens, buns ... 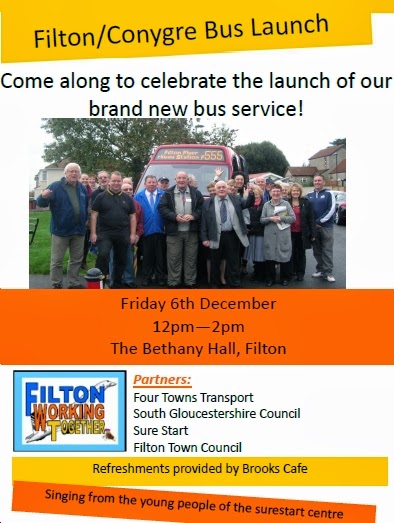 ... and singing. Did everyone join in?

Our happy blog readers can do so right now!
Fun for all the family on the fbb blog. Ahh, happy memories; when three sons were little and reasonably squashable.


On a grey, overcast day at the end of the Christmas holidays we hailed the red bus at the bottom of Braemer Avenue. It was right on time, according to the timetable on the special Filton Flyer pens which were distributed with Filtonvoice last month.

As the doors opened we were greeted by friendly and courteous driver Tony Ward ... 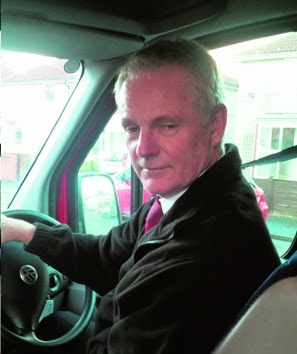 ... who took the £1.50 fare and asked where we were heading.“A complete circuit please” ... and we were off. We got chatting to Margaret Hooper who was heading to Southmead Hospital to visit a friend. She said: “I will certainly be looking out for this again - it’s a friendly service with such a nice driver and once people get used to it, they will use it.”

We were joined by another passenger who wanted to share her views but who didn’t want to be identified. She said that the service was “wonderful” but she wondered if the circuit was too big. She said: “It’s great but I think the route is too wide. If people want to go to the Shield Centre from Conygre that works fine but it takes too long for the bus to come back.”

This extract from a local web-site highlights some of the problems. Margaret Hooper didn't know about it and was waiting for a "normal" bus service anyway. The second shy lady opines about the inconvnience of a large one-way service. Unless your origin and destination are directly opposite one another on the "circle" you will have a short out and and long back ride (or vise versa).

Nevertheless, the Filton "community" has done well to gather funding to buy the bus and to subsidise its operation. Tomorrow we see exactly where and when the bus operates; with the help of Traveline. 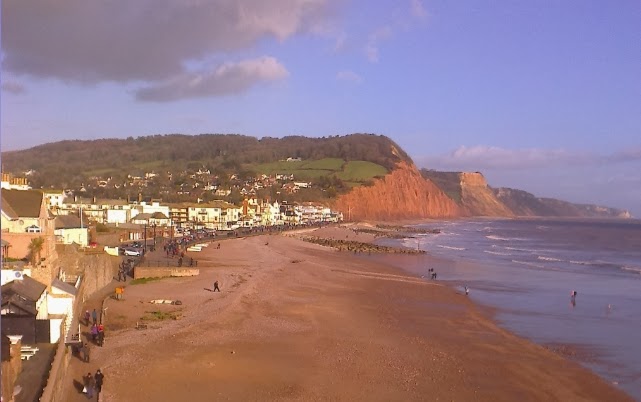