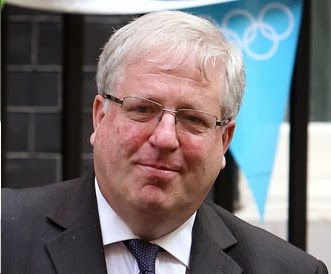 ... this week's Transport Minister, went to Taunton to see the damage at Dawlish. Well, there weren't any trains, were there? 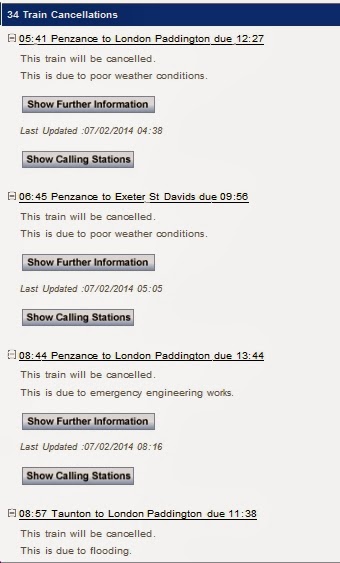 And he couldn't get even as far as Exeter because of on-going engineering work at Whiteball tunnel. He was greeted by First Group glitterati (Fearnley included) to be briefed on plans for replacement coach services while the line is rebuilt.

His Dawlish visit makes fbb wonder whether the hacks will pen a re-write of an older headline:- 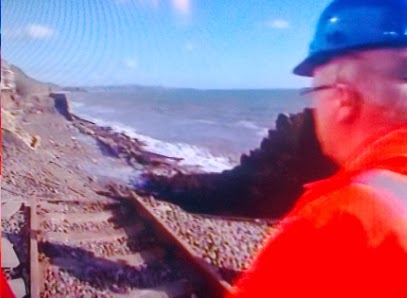 The 1950s original was, "DOCKS, MINISTER STEPS IN" and reminds fbb of a great Coal Strike "tongue-in-cheeky" caption to a picture of injury at the "Battle of Orgreave". It explained, "ARTHUR SCARGILL HAS HIS HEAD EXAMINED." Sadly, fbb cannot find the original picture. 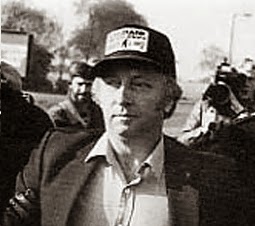 But, back to more meteorological matters.

Whilst big-picture disasters like the Someset Levels,  Dawlish and many others set the journalistic saliva running, we need to remember that the smaller problems are still expensive to put right and hurtful to somebody. Wednesday's wicked weather left Seaton shaken, but not stirred.

These pictures were taken in glorious and half-forgotten sunshine by fbb on his morning "constitutional" 0930 yesterday.

Beach detritus; no wonder the Esplanade was closed with this lot flying about! 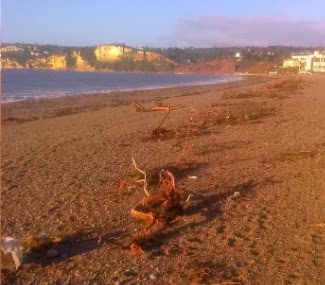 Shingle JCB-ed off the path and back on to the beach ... 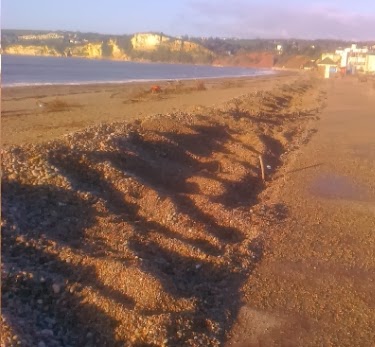 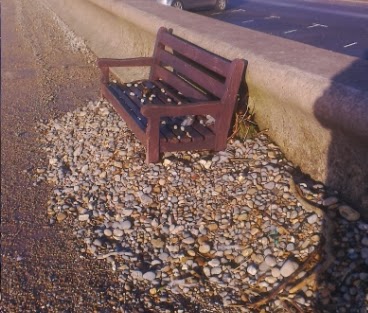 Overall, damage was slight but still has to be put right - at a price.

The spring daffs (or tulips?) have been either washed away or battered to death, ... 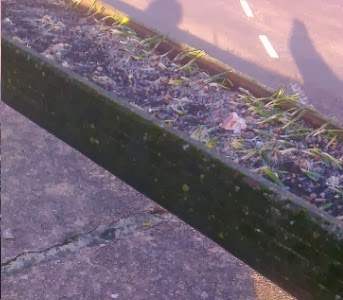 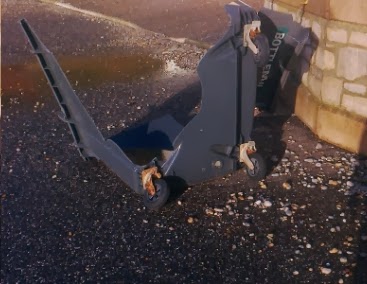 ... and signs smashed to smithereens. 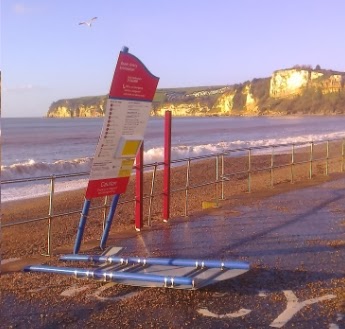 The noticeboard from the red posts was never seen again! 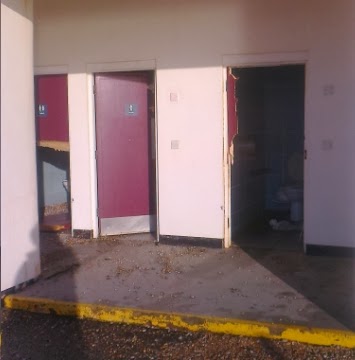 Even a stone wall wobbled and collapsed! 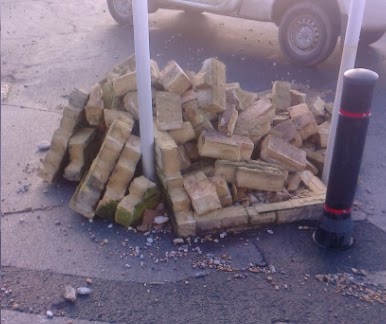 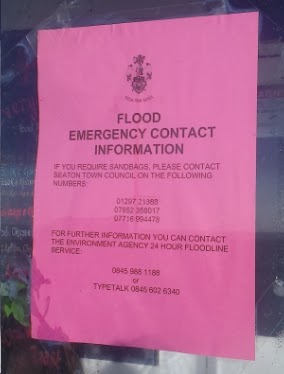 And the Esplanade was still closed yesterday, in theory; but with signs universally ignored! 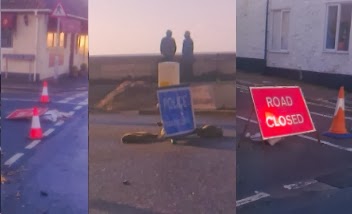 The road was completely clear of shingle etc. but one local "wag" suggested that the exclusion zone was "left up for the next lot"; expected yesterday evening and overnight. A possible P.S. post in preparation?

None of this local Seatonian stuff was specifically transport-related; but it does illustrate how much work everyone has had to do to keep things running. And that applies to every bus company seeking to maintain their business and serve their customers; which is why the Richards Brothers' driver risked the coast road at Newgale. 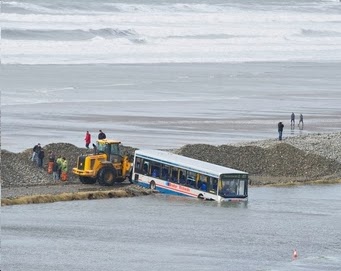 The road is where the JCB stands; the bus is paddling in the floods on the low-lying landward land. It's on service 411, by the way, which operates between Haverfordwest and St Davids ... 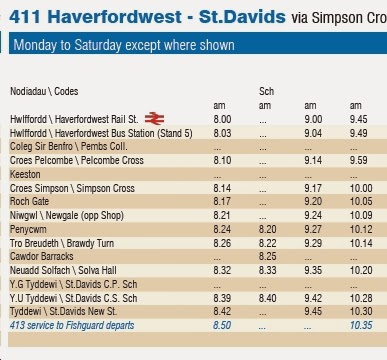 Dai the Driver, condemned elsewhere for irresponsibility, was trying to serve his passengers and get them to their desired destination. And the passengers weren't as much at risk as some reporting has suggested.

But no such bravado will get trains through Dawlish ... 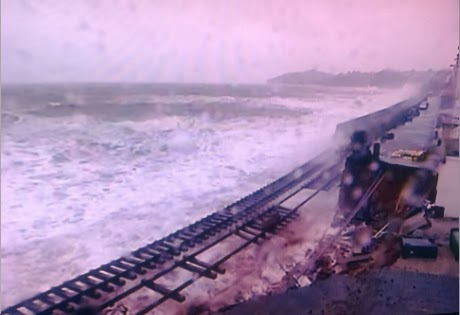 ... whatever well-rehearsed soundbites might be uttered by our Pat. 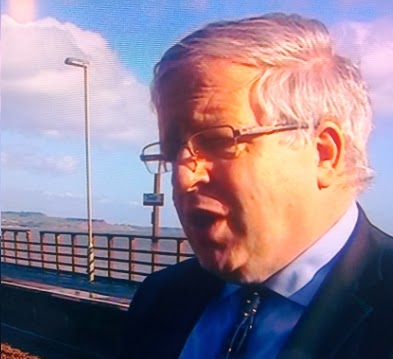 The Minister speaks at Dawlish yesterday. 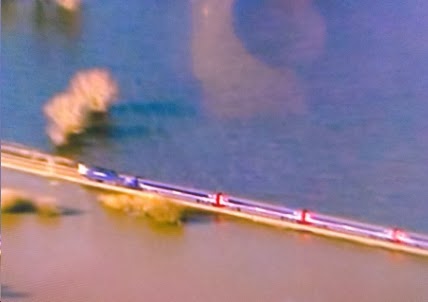 Minister's train curtailed at Bristol
because of floods near Bridgwater : 45 min late at Taunton

We will return to damaged Dawlish tomorrow.

Next rail blog : Sunday 9th February
Posted by fatbusbloke at 02:00