In the little-known novel, entitled "The Sign of Four" we meet John Holmes and Sherlock Watson striving to unravel a public transport mystery. In Chapter 15, our investigative duo has assembled a collection of documents and, from them, seeks to probe deeply for meaningful clues. 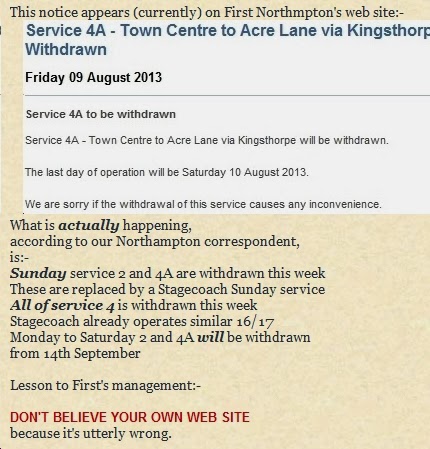 This document, Watson, supplied by an obese omnibus oppioneer, confirms that, despite erroneous information from First, service 4 was withdrawn in August 2013. We begin there.

But yet, Holmes, in a note concerning roadworks adjacent to drapery emporia, we are told that the non-existent 4 will not call at some central stopping places.

And to this we add the latest bulletin about roadworks on Eastern Avenue. 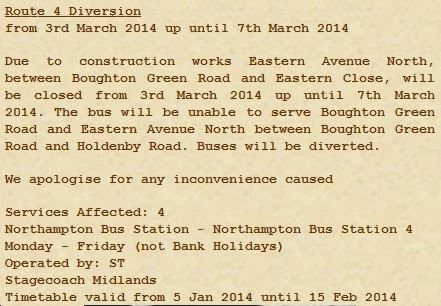 And the careful observation for which I am universally admired, reveals that the No 4 bus timetable in question runs ONLY until 14th February ...

... some 20 days AFTER the timetable is terminated.

So the service will not be running when it is diverted? This is truly a challenge to my limited intellect, if not to your superior brain, Holmes.

It is a challenge to all our intellects, good friend. So much so that my superior brain overlooked a small piece of the confusing conundrum. Reading to the end of the notice, I now see that there IS (or would appear to be) a current service 4.

Just one trip at the crack of dawn, Holmes; an hour when all good men should still be a-bed?

Yet this paltry and pernicious 4 doth truly appear proud and strong in the collection of Sir Brian of Perth's timetables. 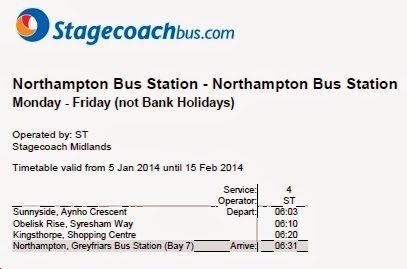 Do we have any other evidence?

I shudder to grace this document with the epithet "evidence", but we do have a map of this service 4, published by the oft-reviled House of Traveline. 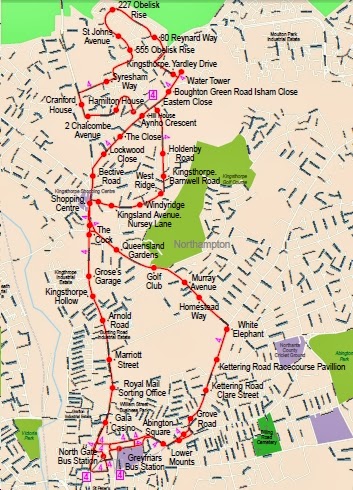 I fail to see, Holmes, how such a convoluted cartographic creation can be derived from one early morning journey direct to town and taking just 28 minutes. It is beyond the wit of any human to understand.

But, Watson, this may be the clue to this entertaining little investigation. Don your mantle, grasp your galoshes and prepare for no little outburst of excitement.

I calculate that we are to travel to the lair of Sir Brian of Perth to demand an explanation.

Not so Watson! We have failed to stoke the fire and it is becoming unpleasantly cold and damp in our sitting room.

But here is the penultimate piece of evidence:-

Well I never, Holmes; a timetable of appalling complexity. Surely not one appropriate for the sign of four?

Precisely, Watson' a proper two squared it is. And from a perusal of this document alone we can solve this trivial little mystery. And I guarantee that once you hear my explanation, you will pronounce yourself filled with wonder at my interpretative skills; and thence suitably distraught that you had failed to recognise and single one of a persuasive train of clues.
=====================================
As John Holmes would have explained (with due arrogance), all the information here perused is substantially correct, despite the attempts of all parties to obfuscate. The conclusions are as follows:-

2  But it seems that one unadvertised journey remained, operated by Stagecoach under tender to the local authority.

4  Then, from the opening of the new bus station a REVISED (but new) service 4 starts; shown by Note 2. 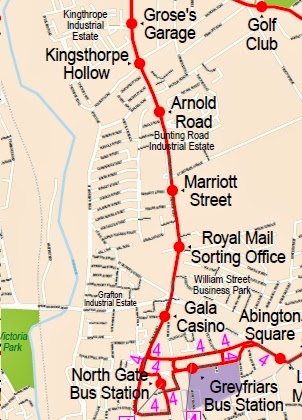 ... and the new service 4 which goes via Kettering Road and the White Elephant ... 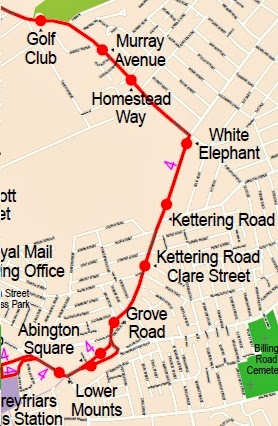 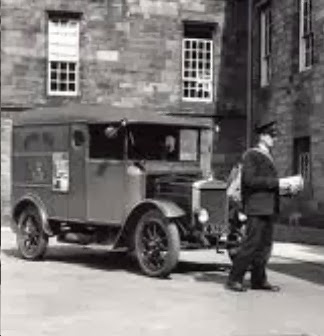 Indeed there is something of massive importance, Watson! Gaze upon the advertising slogan alongside Her Majety' noble head that adorn the potage stamp on this envelope. It is for which corporate entity?

You will find that the missive is a copy of the timetable for a brand new service 4 in town skilled in the cobbler's trade, Watson; times and a map which will confirm all of my conclusions previously revealed to you good and noble self.

I can hardly hold my dithering digits still ...

... indeed, Holmes, it is exactly as you have adumbrated ...

... buses via the laughably named White Elephant public house, each with the sign of four, and a map confirming likewise. 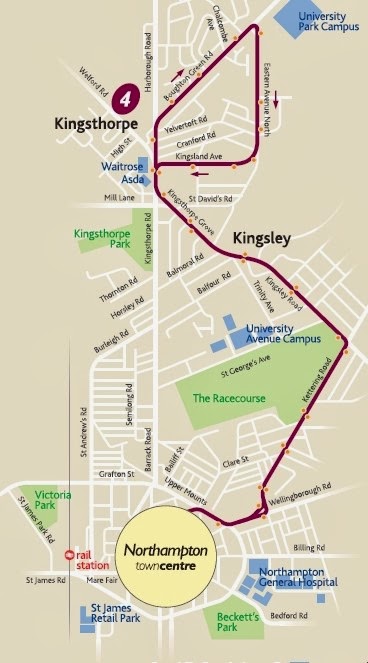 As we say more often than should be necessary: "Public Transport information ain't easy!"

Next rail blog : Saturday 8th February
Posted by fatbusbloke at 02:00