Directions to "Foller" to get you to Sóller [1]


If you think you are suffering from déja vu;
worry not! This blog was published (briefly)
yesterday due to technical problems.


We're off to the Balearic Islands - actually No. 3 son was; for a short holiday. Of course fbb has heard of Majorca and Ibiza but has never been there. He's never been to Wigan, either; but there is a difference. The old man knows where Wigan is, but is hazy about his balearics. 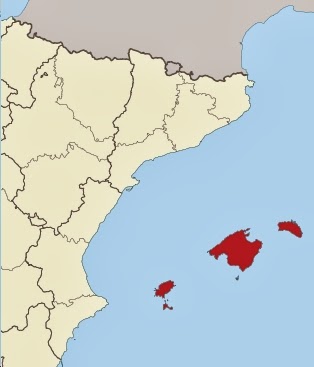 And there they are, in the Med, off the eastern coast of Spain. There are four that most will have heard of: Majorca (Mallorca), Minorca (Menorca), Ibiza (Eivissa) and Formentera, all of which are popular tourist destinations. Among the minor islands is Cabrera, which is the location of the Parc Nacional de l'Arxipèlag de Cabrera.

No 3 son went to Majorca (the name means "big one"; Minorca, amazingly, means "little one") for a short holiday earlier in the month. And here are the big one's vital statistics:- 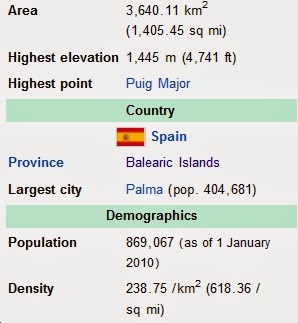 If such things baffle you, then this may help; if Majorca were a perfect square (which it isn't, it's lumpy and has a wiggly edge) it would measure 37½ miles along each side.

So number 3 son is having a great time  on Majorca and sends an email to his father posing this quuestion, "Do you know about the Sóller tram train. I found it fascinating. Sadly"

fbb knew nothing about the Sóller tram train; nothing about Sóller and very little about Majorca apart from its reputation as a holiday resort. 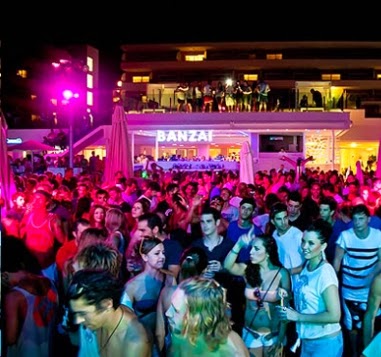 Ah, those quiet relaxing evenings in intimate little back-street bistros supping a bucket of sangria and tucking into a sumptuous sea-food paella ... with chips.

At first glance, fascination is a little subdued. 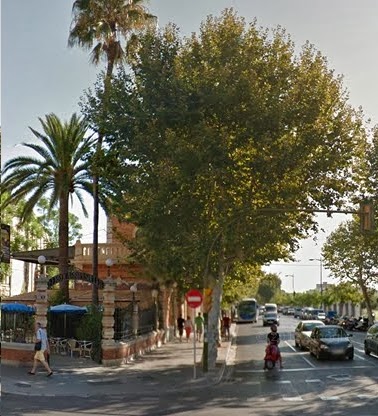 At the junction of Avinguda Joan March and Carrer Eusebi Estada, tucked away in the corner of  the Plaza de Espana, is an archway sign apparently leading to some parasols and cafe tables. On the archway are some helpful words in a foreign language:- 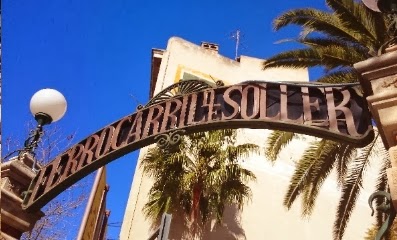 The "ferro" bit looks promising; "carril" means lane or road; so this uninspiring gateway is where it all starts.

But we rush ahead of ourselves. Where is Sóller? 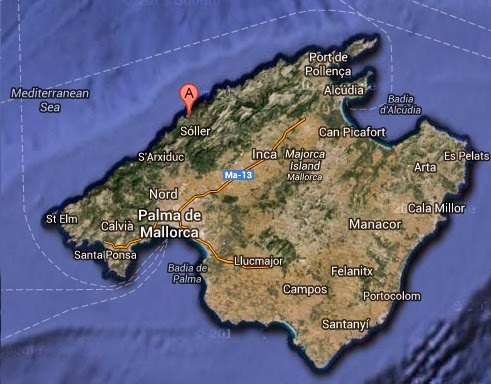 "A" marks the spot. It is a little over 14 miles north(-ish) of the capital Palma. There would appear to be mountains in the way!

Sóller (Catalan pronunciation: [ˈsoʎə]) is a town and municipality near the north west coast of Mallorca, in the Balearic Islands of Spain. The town is some 3km inland, from the Port de Sóller, in a large, bowl-shaped valley that also includes the village of Fornalutx and the hamlets of Biniaraix and Binibassi. The combined population is around 14,000. Sóller has been inhabited by humans since Talayotic times (from 5200 BC), and remains from this era include bronze statues (two of which can be seen in the Museu de Mallorca). The location of Sóller deep in the Tramuntana mountains meant that the town was isolated from the rest of Mallorca and missed out on much of the Roman occupation. 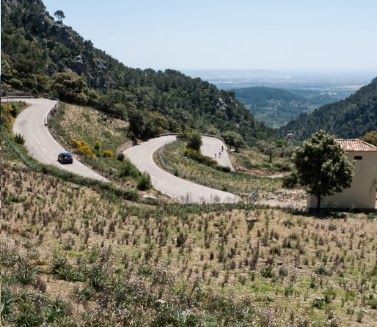 During the 19th century, Sóller became a major exporter of olives and citrus fruits. The French Revolution had seen a great deal of French immigration to Sóller, and it was these migrants who utilised their links back in France to build trade relations. With trade came wealth and the creation of impressive manor houses and public buildings, giving Sóller an air of grandeur rarely seen in other Mallorcan towns. 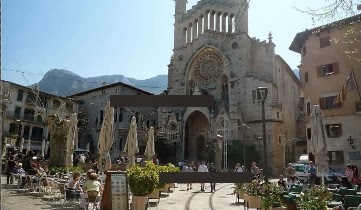 Much more impressive than that iron archway and just a few yards from the "fascinating" entrance is an equally fascinating subway. 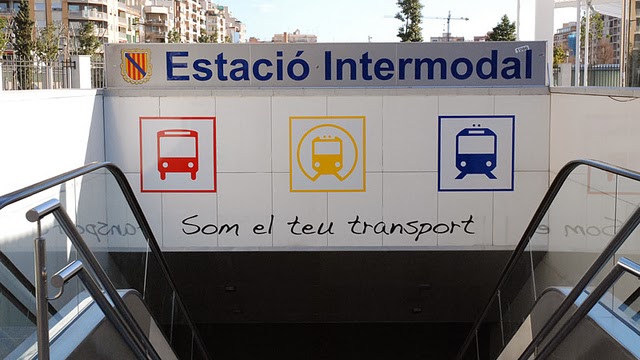 The intermodal station is an underground box of delights. From here was can catch a bus to Sóller; indeed there is are two routes available.

So far, inspired by No 3 son, we now have the choice of a train from an obscure little station; or two bus services from deep in the bowels of Palma de Mallorca. It is slowly becoming much more fascinating.