A Doddle to Dawdle to Dawlish [2]


Before Dawlish itself was settled, fishermen and salt makers came down from the higher ground where they lived, to take advantage of the natural resources available on the coast hereabouts. They built salterns to produce salt and stored it in sheds nearby. The unpredictable nature of the stream, Dawlish Water, during floods is likely to have led to nearby Teignmouth being the preferred site for salt-making, and the practice stopped at Dawlish during the Anglo-Saxon period (AD 400–1000). 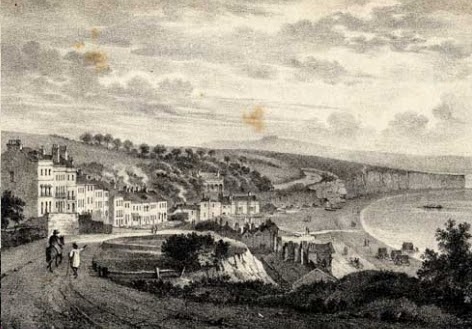 Little of note happened at Dawlish until the end of the 18th century, when seaside locations on the south coast started to become popular with the wealthy, mainly caused by George III making Weymouth in Dorset his summer holiday residence from 1789.

Of course, the Great Western Railway brought fame and holidaymakers in (buckets and) spades. And it has been the collapse of the railway that has brought fbb into the town on a replacement coach from Exeter. 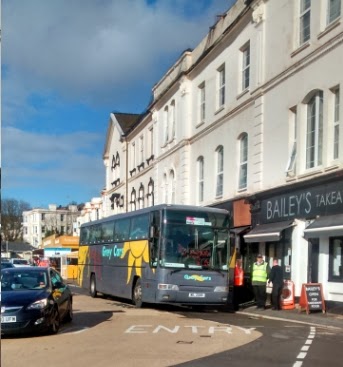 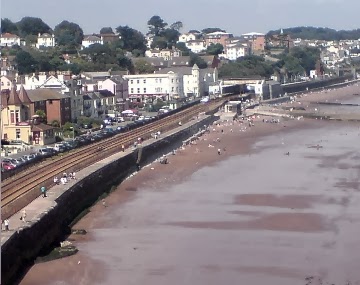 ... were closed and barred due to damage; and the authorities' unwillingness to allow anyone to use their common sense. fbb was ready and willing to risk tripping on a rock. Maybe next "they" will close beaches in case somebody trips over a cuttlefish. 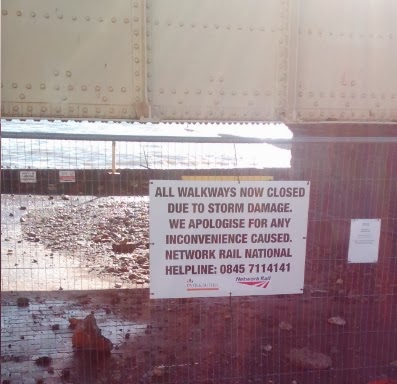 Getting close to the repair work was impossible. An army of beefy and grim-faced blokes with dinky plastic hard hats was on guard at the end of the road, complete with slavering dogs, Kalashnikovs and tactical nuclear weapons.

fbb's schedule allowed him a brief sixty minutes to look round. So, as usual, he went firstly to the Tourist Information Centre (complete with big shiny sign) to seek public transport information. 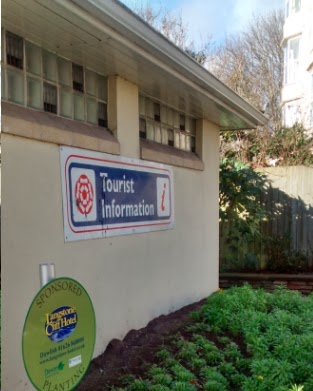 The logical approach seemed to be over there, to the right ... 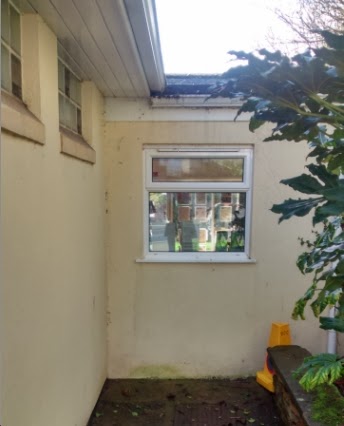 ... but this led nowhere! A retreat of a few yards and a look round the other side revealed an entrance. And, as we all know, the West Country is open for business ... 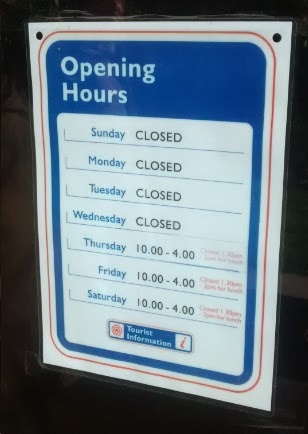 ... but the TiC wasn't. It was half term, the sun was shining and, whilst fbb was waiting for his next journey, four loads of coach holiday makers returned to their "charas". Poor service from Dawlish TiC. But generally, the town was open and looked delightful in the lunchtime sun. 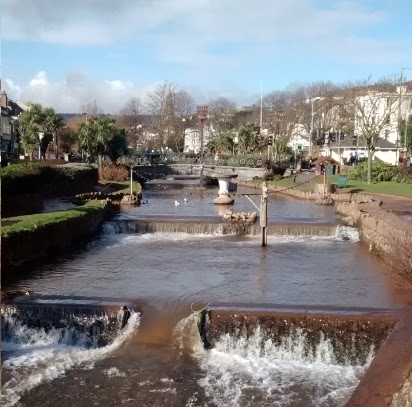 From an aesthetic point of the view the shopping parade near the station is dominated by a huge amusement arcade  facility, not popular with some but great entertainment for others. 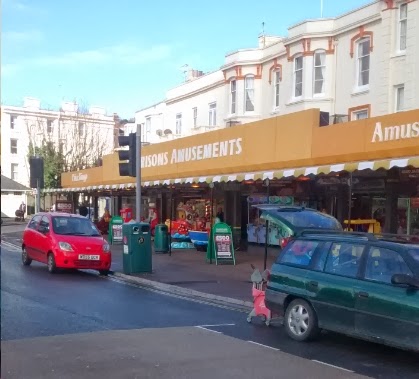 The colour of the fascia looks quite subdued in this fbb snap; it is a lurid orange. Nice? Yuk?

But this is (usually) a public transport blog, so back to the business in  hand. Stagecoach operates the main bus services in the area and the company is aiming to "help those disadvantaged by the flood damage"; i.e. make special offers to try and lure people away from the trains, preferably permanently. 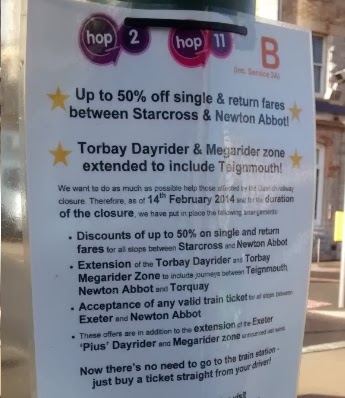 There's an extension of the day and weekly ticket area from Exeter too. 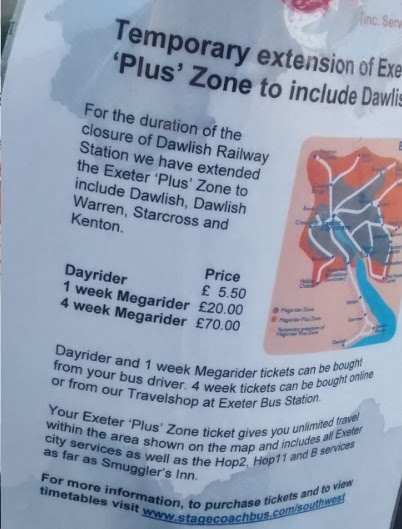 Service 2 parallels the train from Exeter via Dawlish to Newton Abbot (no "Hop" on the map) ... 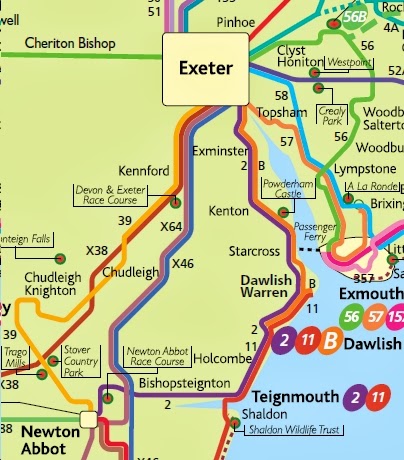 Then there is First's substitute waiting room at Dawlish Station (where access to the platfoms was utterly forbidden) ... 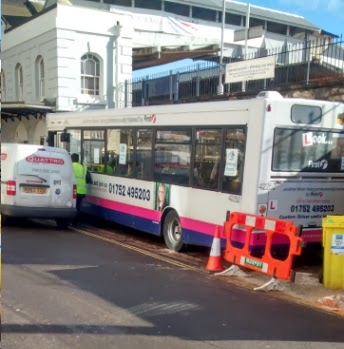 ... in which fbb did not wait; because it was time for lunch at Geronimo's, which serves as a station caff. And perched precariously on the counter was Geronimo himself. 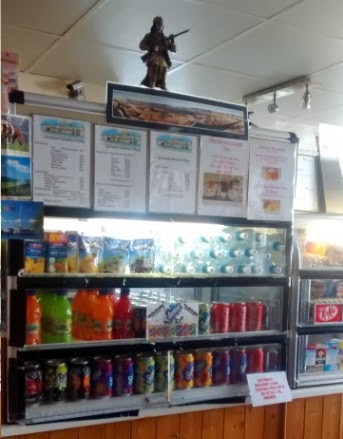 Geronimo (Mescalero-Chiricahua: Goyaałé "one who yawns"; June 1829 to February 17, 1909) was a prominent leader of the Bedonkohe Apache who fought against Mexico and the United States for their expansion into Apache tribal lands for several decades during the Apache Wars. "Geronimo" was the name given to him during a battle with Mexican soldiers.

An all day breakfast ... 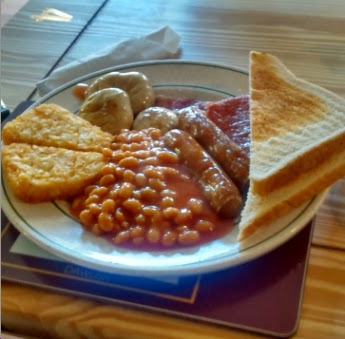 ... and a mugga (£4.49) prepared fbb for his onward journey by coach and train to Plymouth. Wot, no egg? fbb has developed a "reaction" to eggs so the head cook and bottle washer prepared an extra sausage instead. Very considerate.

A few minutes wait, a chat with  very nice man from First, and the coach arrived, 7 minutes late but with a better load of nearly a dozen brave folk. Here is a picture of the 1154 from Dawlish to Newton Abbot:- 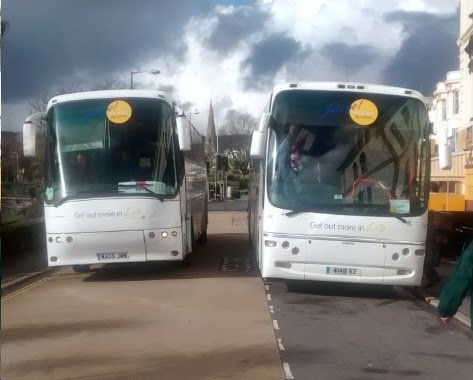 Once again, there were plenty of First blokes and blokesses available to deal with one coach hourly in each direction; three (!) staff on the departing coach (one was going home off-shift), one of whom was actually checking tickets. Once again, departure screens in the station (No access to platforms!) ... 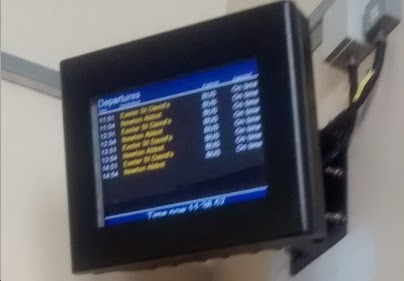 
A Doddle to Dawdle to Dawlish [3]
will appear on Sunday 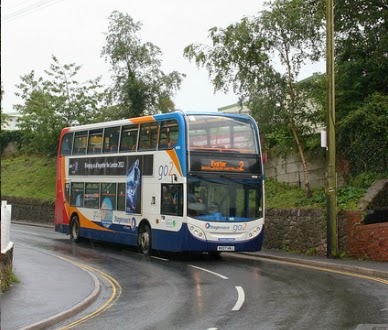 
Next bus/rail blog : Saturday 22nd February
Posted by fatbusbloke at 02:00