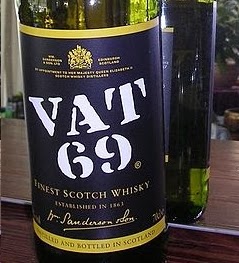 William Sanderson was born in Leith, Scotland, in 1839. He started an apprenticeship with a wine and spirituous liquors producer at the age of 13. In 1863, he already owned his own business and produced liqueurs and whisky blends. In 1880, his son William Mark joined the business. William Mark convinced his father to bottle various blends of whisky. In 1882, William Sanderson prepared one hundred casks of blended whisky and hired a panel of experts to taste them. The batch from the cask (or “vat”) with number 69 was judged to be the best, and this provided the whisky's brand name. Despite the name it is not a vatted malt but a blend of about 40 malt and grain whiskies.

69 is a semiprime. Furthermore, since the two factors of 69 are both Gaussian primes, 69 is a Blum integer.

On many (older?) handheld scientific and graphing calculators, the highest factorial that can be calculated, due to memory limitations, is 69! or 69 shriek or 69 factorial.

Because 69 has an odd number of 1s in its binary representation, it is sometimes called an "odious number."

And, thanks to the mertculous research for which the web site is globally famed, the sainted Wikipedia tells us:-

Wow! Such academic and intellectual intesity! 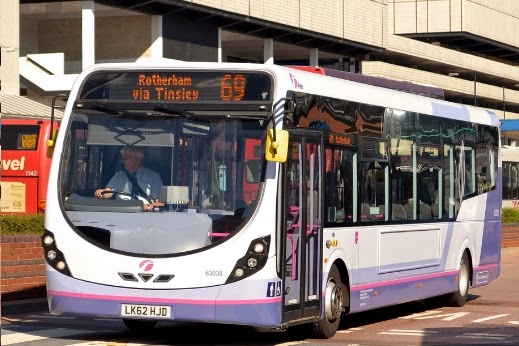 It is also the number of a long-standing Sheffield bus route recently equipped with shiny new Streetlites.

Horse trams via Attercliffe pre-date ownership by Sheffield Corporation. Here is a former privately owned tram on the Tinsley route posing to "celebrate" the takeover. 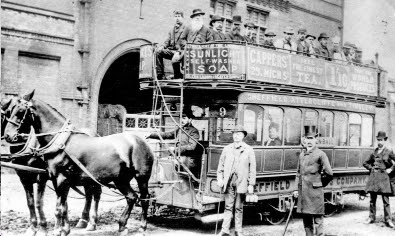 Mr Mallyon, the general manager, is in the shiny topper.

By 1905 the trams were electrified and ran through to Rotherham. Services were jointly operated by the two municipalities and, unusually, the Rotherham "cars" were single ended ... 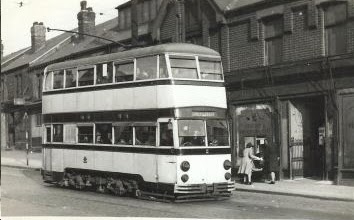 ... so the route ran round one-way loops of roads at each end.

Starting in Sheffield, the route ran via Attercliffe, Carbrook, Tinsley (near the southern end of motorway junction 34 on the above map), Templeborough and the delighfully named Ickles to Rotherham. These communities were originally farming hamlets, bits of which remained until well into the 20th century. This former farm ... 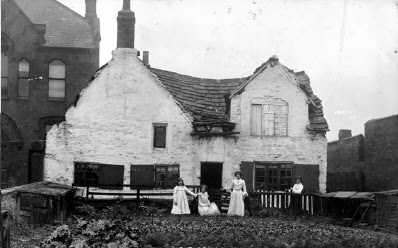 ... survived until 1920 and sits here beside the Victorian Attercliffe Vestry Rooms. The "village" once boasted a windmill ... 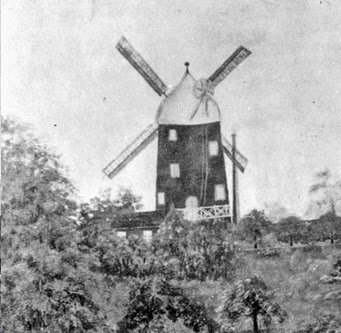 ... and as the community grew it acquired a splendid church which stood, if we are to believe this sentimentalised engraving, at a cliff which gave its name to the district. 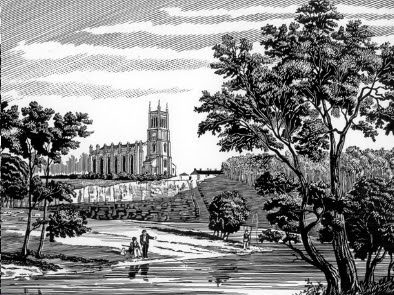 What also came to the Don Valley was heavy industry. Here what little remained of the former "villages" was either replaced by cheap housing for workers or simply obliterated to make way for the steel works.

This is the Steel Peech and Tozer works that filled the land between Templerough and Ickles near Rotherham. 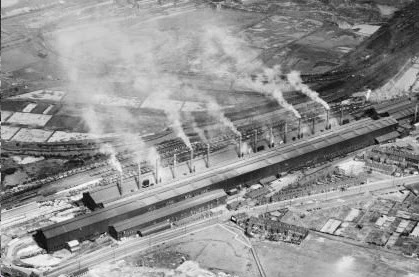 The tram route runs along the front of the works and a scattering of workers' cottages and allotments still existed in the 30s when this shot was taken. The tram ran "frequently" (and that really meant "frequently"!!) seven days a week carrying the thousands of workers to their daily shifts. Many walked, of course, from their sub-standard housing ... 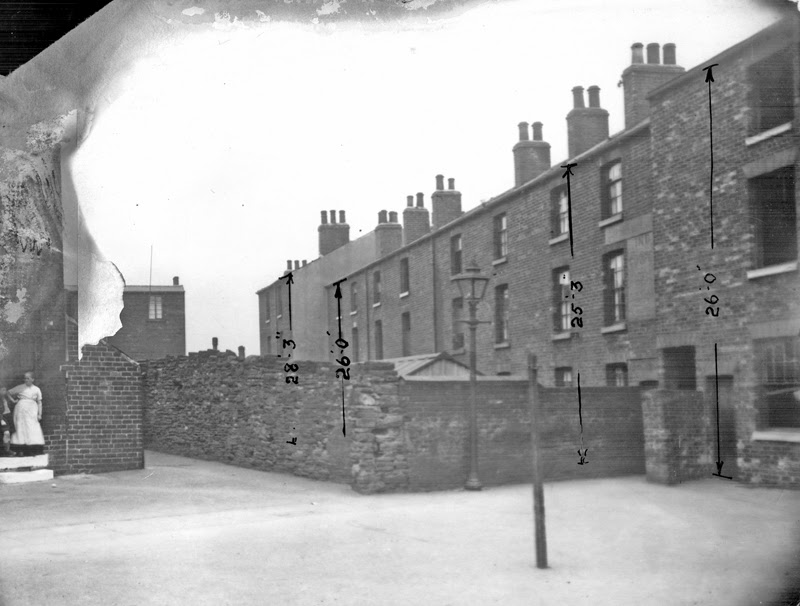 ... clustered round small back yards with "basic" lavatorial facilities.

But there was a problem. About half way along the Sheffield to Rotherham road was Tinsley; and it had a bridge. 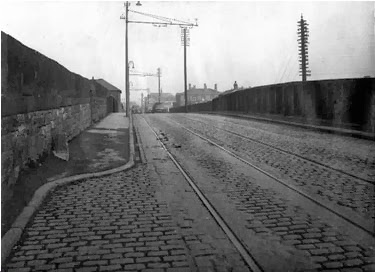 And, furthermore, it was barely wide enough for the trams, let alone the other heavy traffic that needed to pass that way. In 1938 a plan was hatched to replace it; a plan unfulfilled until Mr Hitler had been dealt with.

More tomorrow; when 69 takes on a more personal meaning for the fat bus bloke! 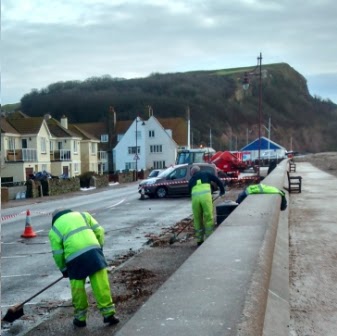 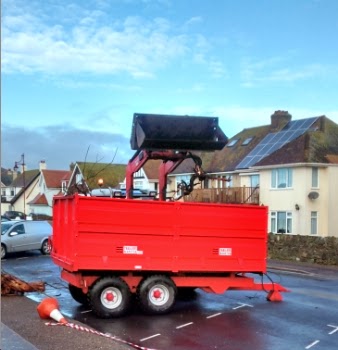 ... and Seaton returns to its quaint normality. Except ... 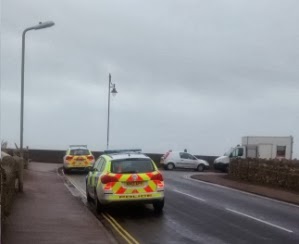 ... police and other officials appeared in profusion yesterday morning as fbb started his "constitutional." A murder? A serious seaside accident?  Russian Invasion?

No, a rogue container washed in by the tide was a serious security risk. 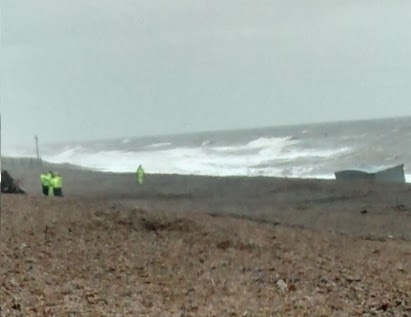 Apparently the box contained 14 tons of cigarettes; sadly soggy salt-water soaked ciggies but ciggies on which no duty has been paid. So these unsociable sticks of smelly leaves must either be impounded and the tax paid or destroyed under the eagle eyes of HM Customs and Excise. Quite how they will get smokes and container off the beach in unclear.
-------------------------------------------------------
Next bus/tram blog : Tuesday 25th February
Posted by fatbusbloke at 02:00