January Changes in Sheffield [P.S.] and Other Bits


Those of us who have continued to use buses to travel in the UK will be well aware that the average passenger does NOT use Traveline, does NOT "go on-line" and, generally, doesn't use timetables (cannot use timetables?). Two approaches are the norm. [A] Ask someone else; passenger, passing man with dog, neighbour, postman (?) [B] Turn up at the stop and hope. 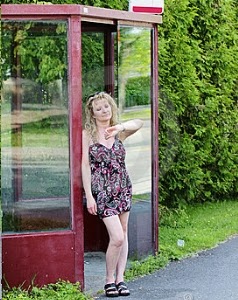 fbb remembers, way back in the swinging sixties (although fbb never swung!), he was approaching a bus stop at Neepsend, Sheffield; this very stop actually ... 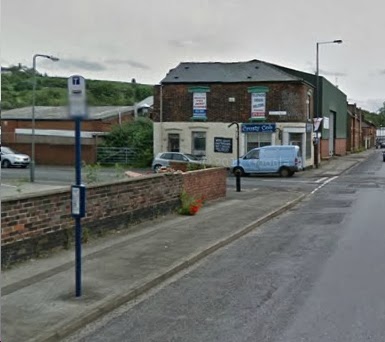 ... although it looked a lot different then! A Sheffield "mester" was waiting. "Ah shouldn't bother pal. Ah've bin wetting 15 minnits. Couldn't run a ------ in't Sto-uns." (Stones brewery stood nearby!) fbb, clutching his Sheffield Transport Department timetable book, proffered the fact that buses were running every 20 minutes, it being tea-time on Sunday; so a bus was due.

"Way, arm goin o-um," concluded himself and disappeared round the corner. The bus immediately arrived on time and conveyed fbb back to the city centre.

fbb reckons a similar scene could be replayed in many locations today; despite the internet, tablets, wi-fi, i-pads, p-pods, Traveline and electronic (un)real time displays.

First bus has explained the major Sheffield changes to buses between Hillsborough, City and Ecclesall Road with a simple and easily understood diagram. fbb has added the previous route numbers as a link with recent blogs. It is not absolutely necessary to read all of them to follow this blog! 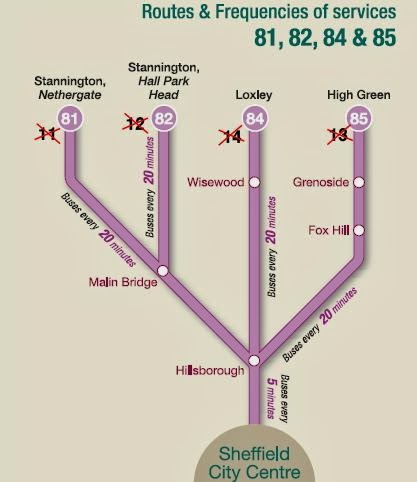 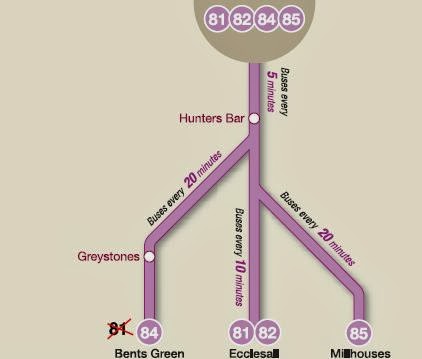 The diagram (above) appeared after fbb created something similar; ...

Although First really ought to know that the 85 does NOT run to Millhouses and never has done! Your cynical blogger does wonder why First had to commission a major cartographic supplier ...

... to produce something that the average 7 year old could do with one hand tied behind the back.

Likewise First really ought to have a play with their web site now and again.

Somebody different (or a piece of the confuser program, more likely) has changed the link because the changes are no longer "forthcoming".

But this is how Travel South Yorkshire explained the reorganisation:- 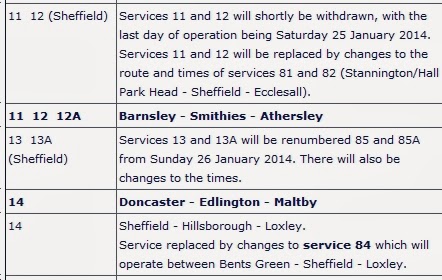 11 ans 12 will be withdrawn and replaced

... all of which refer to the Hillsborough "end" of operations, and all of which "explain" the same "happenings". Meanwhile headings for the Ecclesall Road services say nothing about number changes at all.

And fbb doesn't recommend using the 85 to get to Bents Green; unless you are a pupil at High Storrs School and it's a schoolday. Except for a single journey for those specialist clients, the 85 goes nowhere near Bents Green! 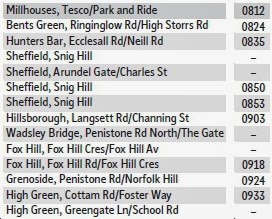 Whilst in moaning minnie mood, there was another big change in Sheffield last weekend. The massively long route 17, a cobbling together of various bits and pieces ... 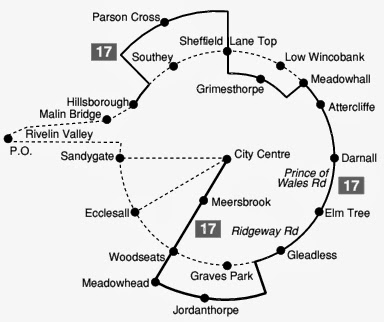 ... has been uncobbled, torn limb from limb, replaced, re-routed and renumbered 19, 35, 36, 37 and 38! And your chubby blogger jesteth not. A former user of  the lengthy and circuitous 17 could be faced with a selection of FIVE  (yes, that is  FIVE ) replacement route numbers. In this case, First Bus have a lot to answer for, but compounded by Sh, You Know Who.

The mangling of the 17 was clearly highlighted in Travel South Yorkshire list of forthcoming changes ...

Not a word about the 17, vanished without trace!

Even looking under "timetables" the information was totally inadequate, omitting any mention of 35 to 38! Now, approximately one week after the change, you have to guess.

Consistency of information is noticeable by its absence, leaving the passenger bewildered. Hey ho - go the the bus stop and wait! 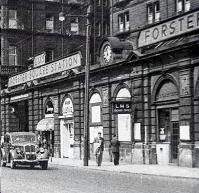 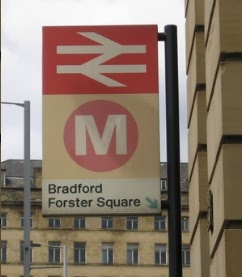 Until now, that is. The WYMetro bus route map is the first to record the renaming ... 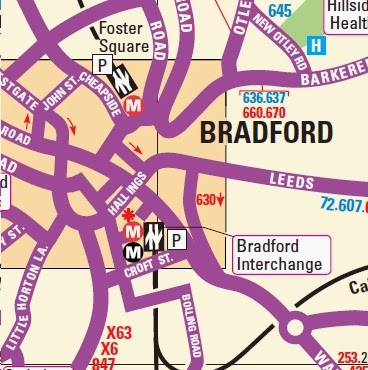 Whence the doctor left for his suicidal puddle encounter in Glorster, mayhap!

First Manchester Ltd is pleased to announce that it has been given Office of Fair Trading (OFT) approval to acquire the Manchester bus business of Finglands Coachways Limited. First will takeover Finglands existing bus services from Sunday 9 February. The acquisition includes the lease of the existing depot in Wilmslow Road, Rusholme, existing service registrations and the transfer of approximately 100 staff. The fleet of 41 vehicles is excluded from the sale although they will be used in the short-term to meet current service commitments. Further details regarding additional fleet investment will be made shortly.

One of the first improvements from 9 February will be the extension of the First Day and Week ticket area to include the Finglands network in South Manchester. All existing Finglands tickets will still be available and details of other new developments will be provided in future announcements.

It seems like centuries since First announced heir "intention" to buy Finglands; in fact the announcement was made on 1st August 2013. Some would question why, in a "deregulated" "free market", the mysterious men in grey suits have the ability to interfere with a deal which takes First deep into Stagecoach territory; a deal agreed by everyone. Furthermore if this bit of regulated deregulation is necessary, why does it take so long?

Or does it simply take so long (like buying a house?) in order to maintain the mystique of the mendacious mandarins, often acting to foster an open market by closing it? 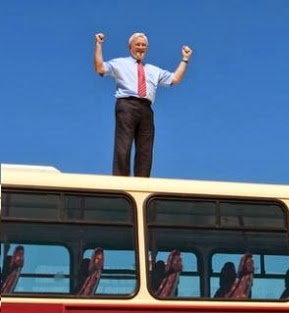 ... will be taking his buses back to Kingston to play with them there. 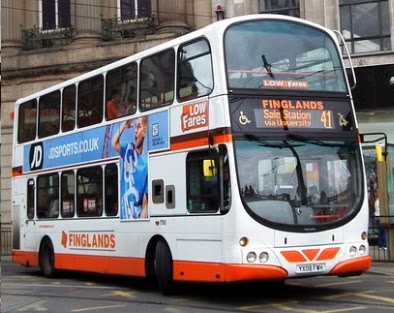 Or will they still be "for Sale"? [see destination blind above]


Next bus blog : Saturday 1st February
Posted by fatbusbloke at 02:00