"For the old, indictment; for the new, excitement!"
The story so far ... 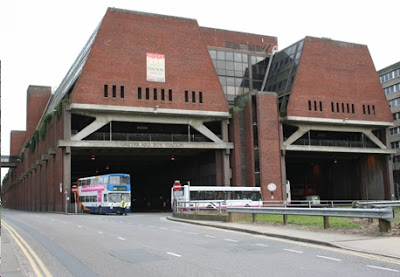 Northampton Borough Council [NBC] wants to demolish the Greyfriars bus station because it is "out of date", "in poor condition" and "despised by passengers". Oh dear. But there may be another reason. 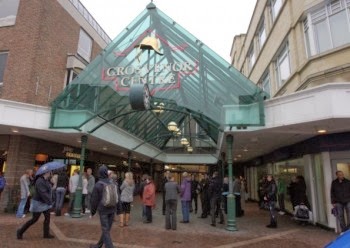 The owners of the adjacent Grosvenor shopping centre have plans for expansion. This will involve buying the old bus station site from the Council and replacing it with more shops. Hooray! 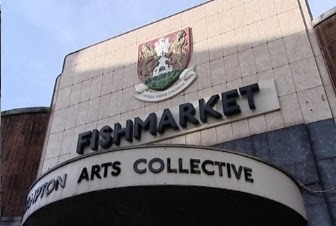 NBC will build a band new "state-of-the-art" bus station on the site of the old Fish Market, recently an Arts exhibition centre. Sounds jolly good all round.

The sadness of the old bus station was highlighted in a TV programme looking at places that the public voted to demolish.

The TV programme is not entirely fair to the much maligned mausoleum; but improving the old bus station has never been debated as a serious option. Equally unanswered in the video is the question as to why the spiffing new 1970s interchange should be so dismal and decrepit today!

But here, Councillor Mackinosh described the plans for the new facility with boundless enthusiasm.
Back then, he seemed particularly anxious to emphasise that the new bus station would be big enough. Some people were not so sure.

But everything is all going to plan. 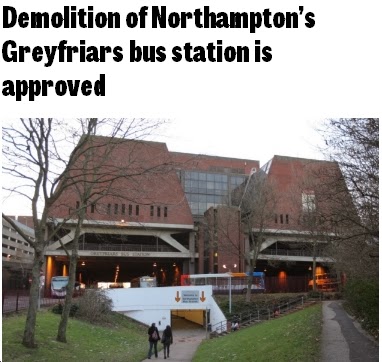 Work to demolish the Greyfriars bus station in Northampton will start on March 31 next year, and could take up to 18 months to complete. Decommissioning work started in February, when fixtures and fittings were stripped out of the office complex above the site, and the overgrown roof garden was cut down.

And the main process will get underway 26 days after the opening of the new North Gate bus station next spring. Once the new station is opened on March 5, hoardings will go up and Greyfriars will close completely.

The demolition is expected to take up to 18 months, as the building will have to be dismantled brick by brick. The time estimate is from the removal of the first brick, right up to the point where the site is cleared and ready for redevelopment.

Council leader, Councillor David Mackintosh (Con, Rectory Farm), said: “I think it’s important you look at the town centre as a jigsaw and you have to put all the pieces in place."

But the Councillor then added, "Legal and General has exclusive rights to redevelop the site, but its plans to expand the Grosvenor Centre are still on hold. On this issue, Councillor Mackintosh said: “We have clearly got to have a number of other conversations about what happens on that site."

House of Fraser has announced that it is to close its store in the Grosvenor Centre ... 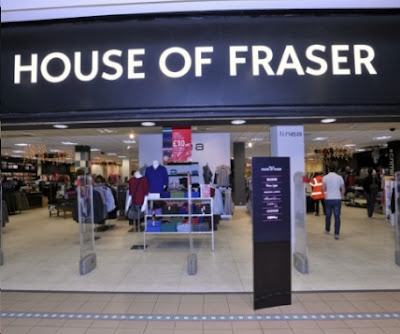 ... and there are numerous other retail properties standing empty in the town.

But all is going ahead at a merry pace with a recent "topping out" ceremony at the new bus station.
Also at this somewhat inaudible sound-bite exravaganza, the building was named "North Gate Bus Station" to commemorate the non-event that the bus station is nowhere near where the north gate of the long-lost Northampton Castle might have been! Despite this geographical fact, Councillor Mackintosh confidently avers,

"We felt we needed a proper name and this was the entrance you would have taken if you had come through the castle's north gate. We wanted to give it a name which really resonated."

So, at the beginning of March, Northamptonians will be dancing in the Market Square to celebrate this astounding improvement in its public transport infrastructure. 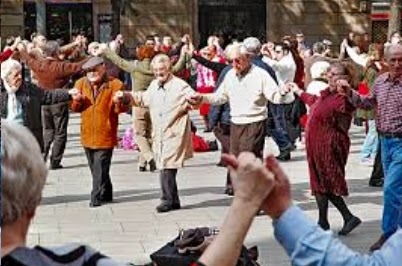 Perhaps not; when they work out how much it has cost! "Loadsamoney isn't funny"

Perhaps not; when they are waiting in the rain with indequate shelter in the Drapery. "Interchange out of Range"

Perhaps not; when the town's traffic log-jams on a wet and cold February market day. "Learning about Turning"

Perhaps not; when the townsfolk realise that it would have been "cheaper to keep 'er!"

It is these points that our next episodes will be examining in more detail.

First, the cost. Thus, tomorrow, we pick the brains of a former town Councillor who was involved in the decision making process. 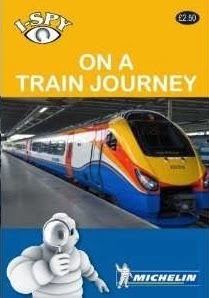