"Loadsamoney isn't funny"
We are grateful to Donald Rumsfeld ... 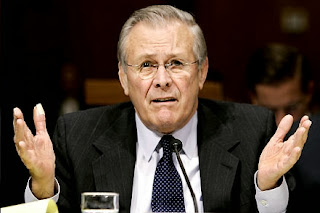 ... for stepping in to explain the finances of Northampton's soon-to-open North Gate bus station. That's the one so named because it is nowhere near the possible, theoretical or historical location of anything that might, by some extended stretch of the Council's imagination, have been called a "north gate". Anyway, take it away, Don!

For those of our readers who may need a little further clarification of Donald's accurate assessment of the Bus Stations' finances (both of them, new and old!) we need, perhaps (?), a little more detail. For this we'll call in a former Councillor.

Tony Clarke has a rich and varied political CV! 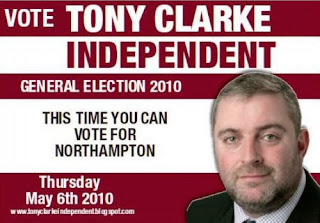 ... previously a British Labour Party politician, he was Member of Parliament for Northampton South from 1997-2005. Clarke was also a director of Northampton Town Football Club for 11 years 1999- 2010 and as General Manager at the club between 2005 and 2008. He also served as a Special Constable with Northamptonshire Police between 2003 and 2007.

His (extensive!) Wikipedia page is (here)!

His blog details his concerns about the bus station "scandal". In this fbb blog the events and financial implications are summarised all too briefly. 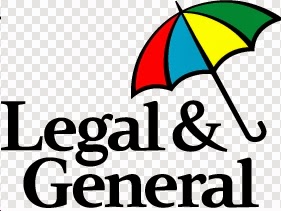 "A contract was signed between the Council and the owners of the existing Grovesnor Centre, Legal and General in 2004; I was on the council at the time and was party to the detail of that contract."

"My own group (the Independents) were the only group not willing to support the deal, we felt that the land in question was being sold by NBC to Legal and General far too cheaply, and we thought the conditions resting on the shoulders of the Council Tax Payer to uphold its end of the contract to be far too high."

"Commercial sensitivity to this day excludes me revealing either the price to be paid to NBC from L&G or the extent of the land to be purchased or even the fine detail of the contract. But the council’s actions and Legal and Generals inaction since speak with much more authority than any whistle blower could ever achieve." 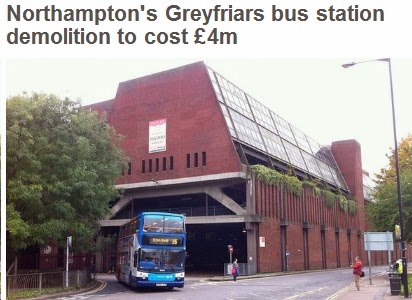 The development of the Grosvenor Centre is "on hold"; meanwhile the Council has announced that demolition is to start at a cost of £4 million ...

... to be paid by the burghers of Northampton via their Council Tax. 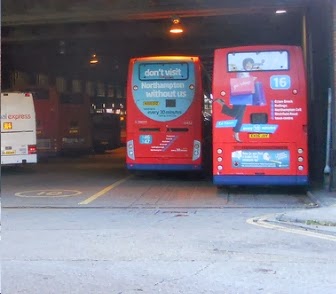 "The council had to buy Stagecoach out of its lease on the Greyfriars bus station, this was done to the tune of £5.5m of Council Tax payers money being handed over to the bus company." 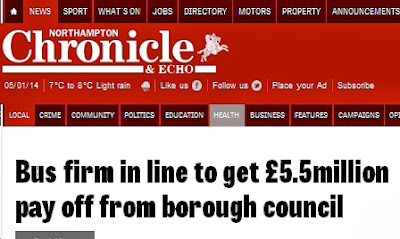 
"Another £8m committed to building what will be little more than a glorified oversized glass bus shelter in the middle of a predicted traffic hell."

Councillor Clarke's opinion of the new bus station is shared by many!


"Meanwhile we heard that the Mayorhold Car Park was to have a £2m refit, supposedly as part of the deal (but we can’t tell you why!)"


Another tenant (the Northampton Arts Collective, occupiers of the former fish market) was paid off with £75,000 spread over three years. 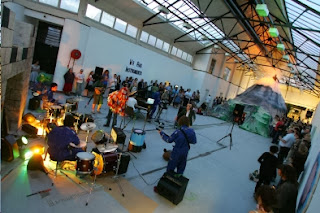 a "happening" in the former Fish Market

And with extra "unforseen" costs and the inevitable budget overruns; what will the eventual total be?


And Tony Clarke concludes his tirade ...

"And in all that time just what have Legal and General Done? and what have they spent? We have all seen the pretty pictures of proposed schemes press released to the local papers, we have even heard of their extended plans to build houses, hotels and offices on the still to be disclosed site, and we shook our heads in dismay when they suggested they may have to “scale back” their plans on the size of the extension, but where are the planning applications? Where is the financial commitment?"

He may be a stroppy ex-Councillor ... 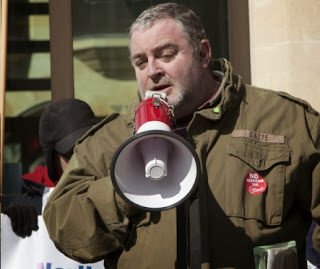 And, less the numbers are too mind boggling, just consider a parallel situation "oop north", in Preston. 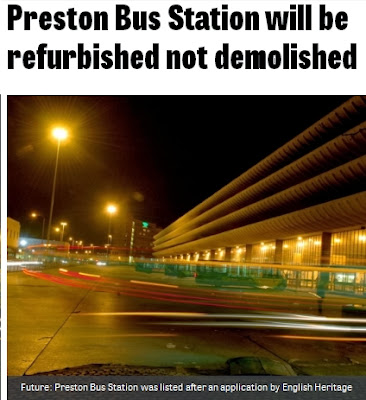 Here the bus station is  "out of date", "in poor condition" and "despised by passengers". (sounds familiar!) The plan was to demolish it, but protesters (including English Heritage) have brought about a rethink. The refurbishment costs will still be high (£21 million is quoted) but Preston's station is four times the size of Greyfriars. An estimate of the price for a refurb of Northampton's old mausoleum is about £8 million.

But it would seem to be too late!

But fbb has an idea! Of which more anon.


Next bus blog : Wednesday 8th January
Posted by fatbusbloke at 02:00