fbb has not, in the past, been backward in coming forward with his views on the publicity churned out by South Yorkshire Passenger Transport Executive under the "brand" of "Travel South Yorkshire." Your chubby blogger has even been summoned to the office of David Brown, former Director, to be "put right".

The gist of that meeting (in December 2011!) was a hesitant admission that there were problems (of a minor nature?) with the publicity machine, but under the then proposed "Partnership", everything would blossom into beautiful efficiency and all hiccups would be stifled.

Very impressive! But how has the publicity impoved? There have been numerous marketing "initiatives", but fbb is interested in the normal process of printing & distributing leaflets and the information available at bus stops. To put it simply ...


After over a year of partnership
Have bus timetable leaflets
improved?

Fortunately, fbb has been able to obtain the minutes of a key Partnership committee. These documents record the discussion, proposals and implementation of publicity for the timetable changes due at the end of this month. fbb has selected the relevant passages.

DG welcomed representatives from the bus companies, head of IT and Mr I M Keen, a PTE management trainee as observer. DG stressed that IK (Mr Keen), although constitutionally only an observer, was welcome to comment at any point in the meeting.

DG : Just for information; any comments?

IK : I am new to the area; so can you tell me where Washington is?
DG : In the USA! (laughter)
SC : Isn't it somewhere near Newcastle? (laughter)
IT : No idea.
DG : Why do you ask?
IK : Apparently we run a bus to Washington from Doncaster, every 10 minutes! 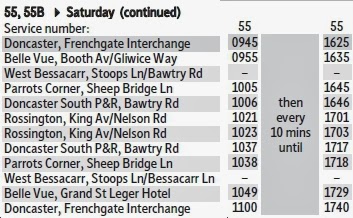 IT : Not possible. The details are downloaded from our sustainable database; it must be a new road name which has been misplaced by the sort routines. Don't worry, the passengers won't know either! (laughter)
--------------------------
DG : Glad to see you are maintaining the First Bus tradition, FB!
FB : You mean altering the X78 at every set of timetable changes? 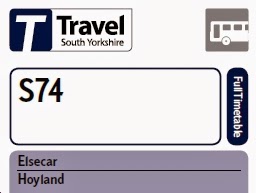 IK : It runs from Elsecar to Hoyland according to the current leaflet.
SC : That can't be right, Keen. I'm fairly certain that we run the 66 between Elsecar and Hoyland. 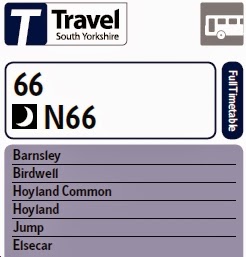 IK : Actually it doesn't really provide the main service. It runs at shift times to the Shortwood Business Park. But it doesn't say that on the leaflet cover. 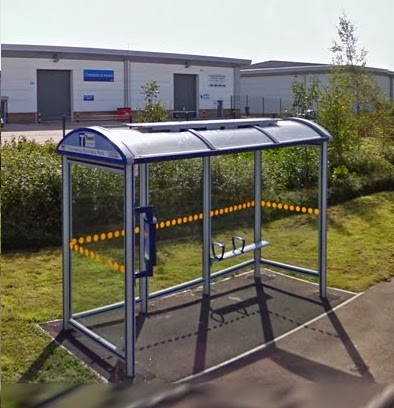 IT : We often get confused in IT! (laughter) The punters seem to cope and, as we all know, the bus to Armthorpe has always been an 82, and likewise the bus from Stannington to Dore has always been an 82  4 . There's something to be said for tradition.
DG : Well said Tim; tradition is so important.  But we must move on. Next item.

A few additional notes:-
1  The list referred to is as published on line ...

... and the current list can be viewed here. But, please note; if you are reading this blog later in 2014, the link will take you to the list current at the date of reading and NOT that referred to in this posting. 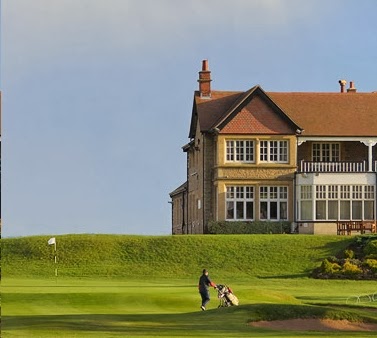 4  The traditional route number for Stannington was 7. The 82 has never "traditionally" run to Dore. 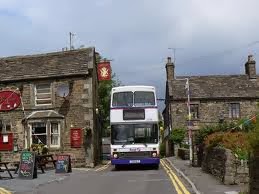 Two morning journeys start from the village on the current 81 timetable, which is 15 months old, traditionally. Similar journeys numbered 81 and 82 remain after the end of the month. 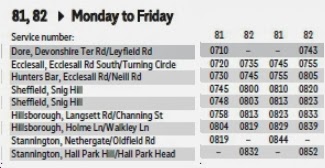 
Next bus blog : Tuesday 13th January
Posted by fatbusbloke at 02:00