Buzzing off to Bradford [6]


But first, a look round the bus station bit of Bradford Interchange. Lift, escalator or stairs transport us to the concourse. We then arrive in a vast, bright, clean cathedral of omnibological opulence. 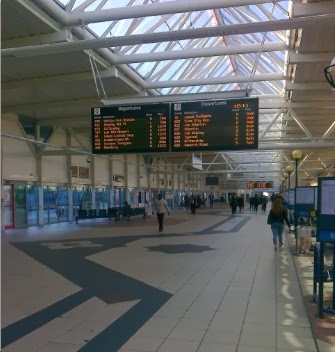 Assuming you know which bus you want, the big departure screens will guide you to your chosen stand. If not, it's a bit more tricky as explained in yesterday's blog. On the left is a line of stands with simple pull-ins; on the right, chevron bays. 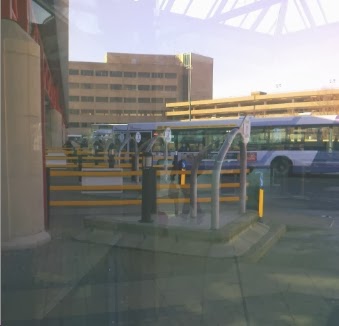 Access to the buses is only provided when some mysterious magic contrivance opens the stand door; it is triggered when a bus parks, or when a man in high-vis jacket walks past outside. This means that there is nowhere external which could be accessed by fbb without triggering the arrival of a WYMetro SWAT team intent on confiscating fbb's accoutrements. Not nice!

Once upon a time a bus enthusiast was free to wander at will, gazed upon only with pity by inspectors who were happy to assume that sad old men with cameras had a modicum of common sense. 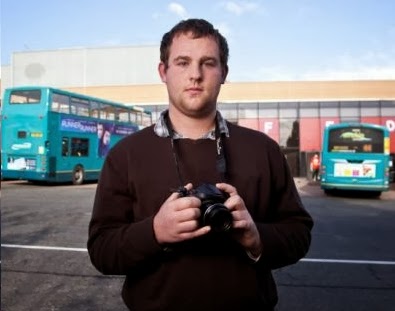 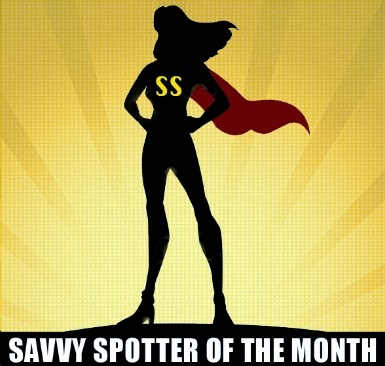 A quiet corner at the top of the escalator afforded a clear view of arrivals and departures. Mostly we are viewing standard First Bus rolling stock ... 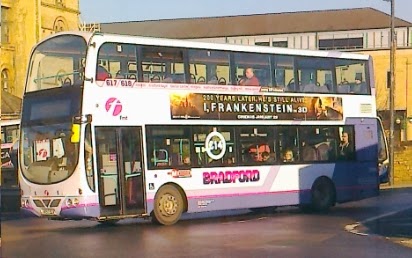 ... with limited intrusion from Transdev Keighley and District. 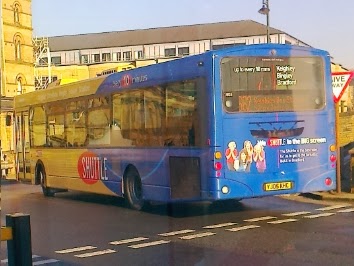 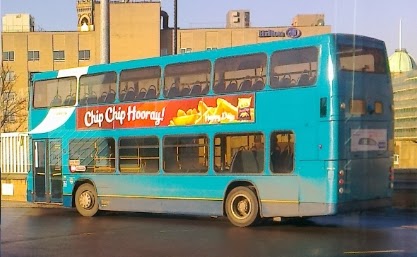 ... including a rather half-hearted attempt at route branding. 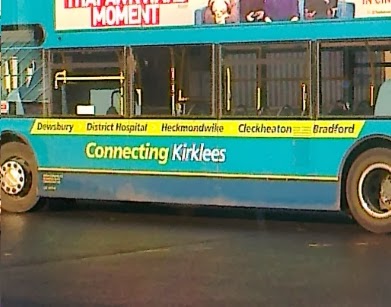 Brand X - sorry, Stand X is for the Hyperlink 72 which appeared very busy. 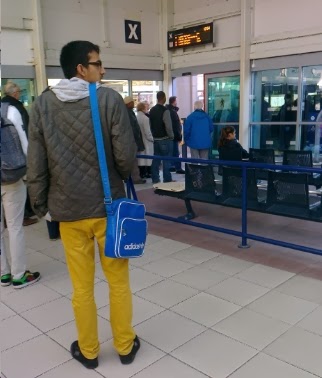 One possible explanation might have been three departures on the "up to every 7 minutes" frequency within 5 minutes! Duplicates? Nope; a touch of late running! Somehow, trendy bendy buses still look odd and decidedly un-British. They didn't work at all on York 4; they didn't work very well on Leeds 4 and they hang on on Swansea's 4 (daytime only!).

Here is a back end (the bit with the engine in) propelling its front end out into Bridge Street and back to Leeds. 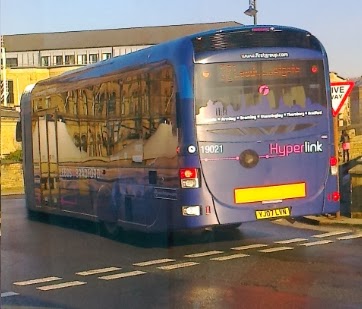 Despite a supposed 7 minute frequency there are rumblings of discontent on the 72. 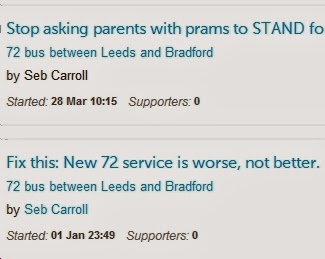 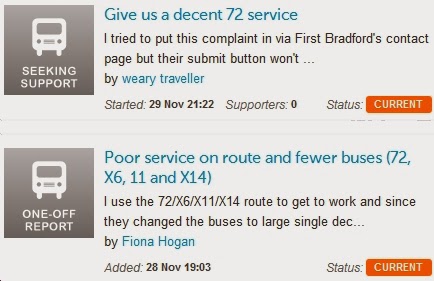 The service may be frequent but there are less seats than in the "good old" pre-hyper days. 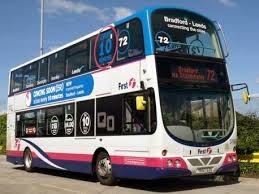 The fbbs are moving to Stand Y to catch their 662 "shuttle" to Nab Wood Crematorium. The stand offers paltry information. Not a dicky bird about the route; not a chipolata sausage of a timetable and an impressive zilch about fares. 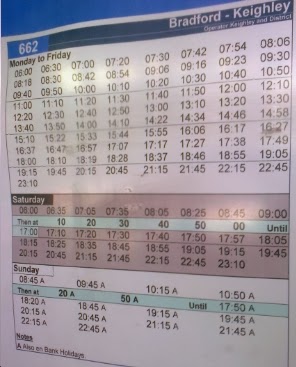 All the Sunday journeys are coded "A" which tells us that they also run on Bank Holiday Mondays. Why not just print "Sundays and Bank Holiday Mondays" and "Monday to Friday EXCEPT Bank Holidays" in the heading? Sorry, the expensive confuser system can't manage that. One daren't ask about Good Friday!

But there was a real time electronic departure screen. 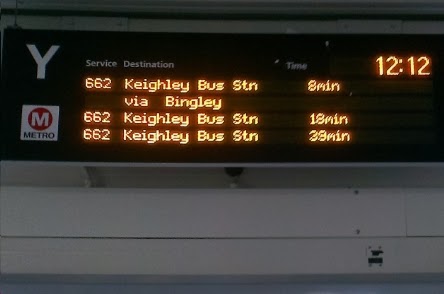 fbb watched for a while and the 8/18/38 min signs changed almost together to 17/27/37; either this wasn't real time or the service was running so perfectly as to be unbelievable. Maybe Transdev are better at running buses than First?

The pointlessness of these screens was ably demonstrated to the fbb's later. They arrived from the bowels of Bradford Interchange for the 1300 departure, having lingered too long on their sarnies and tea to catch the 1250.

At 1300, no bus arrived despite it being there on the screen. At 1303 a bus did arrive, by which time the 1300 had vanished from the screen. The fbb's boarded, confidently expecting to depart straight away. Alas no. They left ptomptly at 1310 on the 1310 departure. The 1300 was invisible; a ghost bus, transparent to all concerned.

"This 1300 is no more! It has ceased to be! It has expired and gone to meet its recovery truck! The 1300 is bereft of life, it rests in peace! Its timetabled processes are now history! It's kicked the bucket, it's shuffled off its scheduled route, run down the curtain and joined the great bus depot in the sky! It is a dead bus." 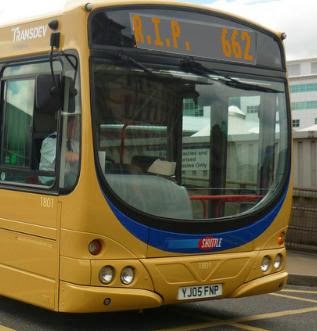 The driver of the 1310 was extremely helpful. Although fbb had downloaded a piccy of the bus stop at Nab Wood, the man at the front kindly called out the stop and all was well. Ironically the fbb's (public transport) were the first of the wider family to arrive whilst hearse, the limo and the rest of the "close" mourners cut it very fine indeed; road works in Shipley and traffic cloggage in and around the Chapel impeded even their sedate progress.

It would have been inappropriate for fbb to gloat.

P.S. With reference to some of yesterday's comments. Nab Wood Cemetery does appear on the route diagram on Transdev's Shuttle 662 leaflet. 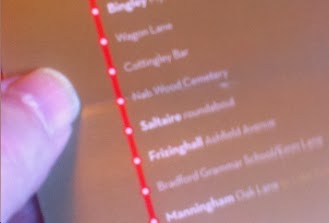 Next to fbb's fbt (fat big thumb!). But the rudimentary route diagram, a poor substitute for a proper map, does not appear on-line. The on-line version is one of these ... 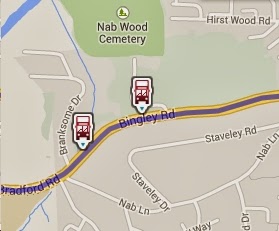 ... complete with a pointless animated bus that runs along the route. Amusing? fbb is perhaps too old to enjoy the thrill of seeing a little bus logo chuntering across his confuser screen; give the old man a proper map any time. 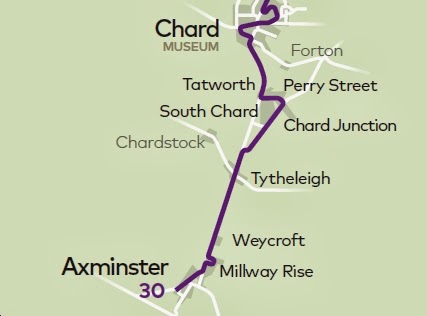 It's MillwEy Rise and TytheRleigh. Clearly Roy Stenning was having an off day. We all have those; but did someone at First "Buses of Somerset" and/or "Taunton" check it? And has the person who did (or didn't) ever travelled on the service 30 to Axminster?

Next bus blog : Friday 31st January
Posted by fatbusbloke at 02:00