Geography's Not My Best Subject?

so says the editor of "The Independent", maybe.

But the basic story was carried in all the newspapers; this from London's Evening Standard last Thursday (18th).

Super Heathrow: airport unveils
4-runway plan:- up to
one million flights per year

Heathrow could become a four-runway “superhub” with up to a million flights a year, it emerged today.

Bosses at the airport unveiled proposals for a third runway, and the possibility of a fourth, insisting either option would mean fewer residents affected by noise.

Three schemes for a third runway would increase the maximum flights from 480,000 to up to 740,000 a year. Heathrow bosses say this would maintain Heathrow as a “Premier League” airport and “win the race” to be Europe’s leading aviation hub.

A fourth runway would push the number of flights towards a million, according to analysis of figures in Heathrow’s “A New Approach” masterplan.

Proposal 1 : Remove a large chunk of Stanwell Moor, fill in a reservoir and divert the M25. sounds easy if you say it quickly. Bits of Stanwell itself would not survive either. 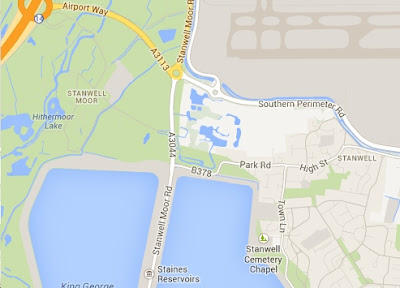 Traffic might be a bit tricky while the new motorway was being constructed. Apparently it gets a bit busy from time to time! 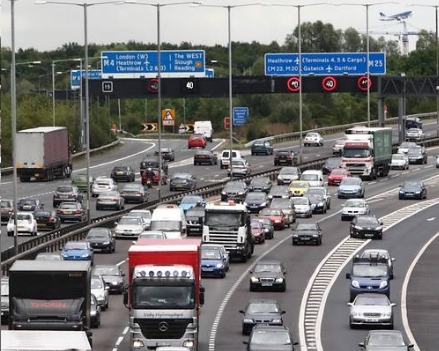 Proposal 2 : Obliterate the villages of Sipson and Harmondsworth. 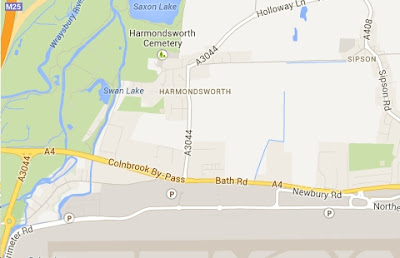 This, in essence, is a restatement of the long standing "Third Runway" project ... 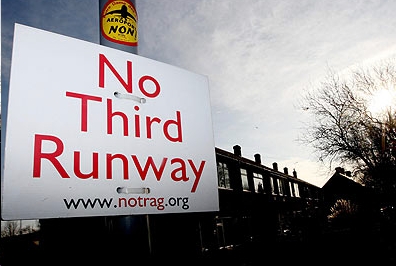 ... but remaining an aspiration in some (Labour) political circles,

Proposal 3 would do incalculable damage to Harlington ... 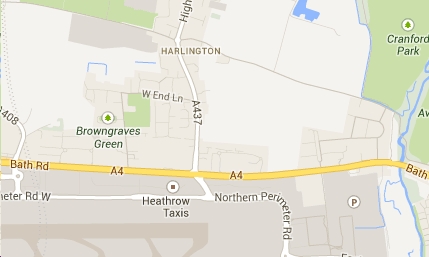 ... where Station Road has already changed quite a bit. 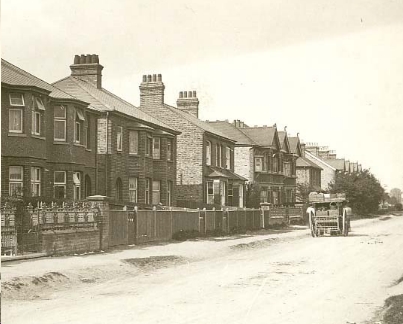 Needless to say, residents of Sipson, Harmondsworth, Stanwell and Harlington are not exactly overjoyed at these ideas. Neither are residents who may be untouched by the actual development overly convinced by the suggestion that doubling the number of flights will bring less noise.

But the readers of "i", the expurgated version of "The Independent", were provided with a helpful summary in last Thursday's edition (18th July). fbb has re-jigged the graphic to make it blog-friendly. 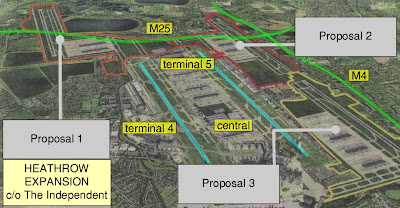 click on the graphic  for a much larger version

Heathrow's two existing runways are shown in blue; the motorways are highlighted in green and the three proposals are labelled accordingly. Simon Calder, the paper's much respected travel correspondent, explains it all very well.

But, sadly, the graphics department gave the job to someone on "job experience" whose understanding of basic geography was not of the highest standard. So basic was their lack of understanding that simple compass directions appear to be a complete mystery. To set the scene, remember that the M4 runs from London (bottom right) to the west at the top of the diagram. The M25 runs from south (left) to north (right).

So here is The Independent's panel describing Proposal 2. 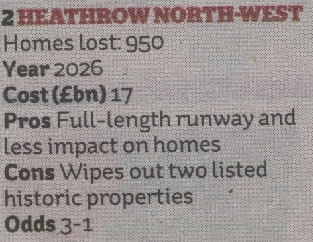 Yes, that's about right. Proposal 2 relates to development to the north west of the present airport.

But what of Proposal 1? 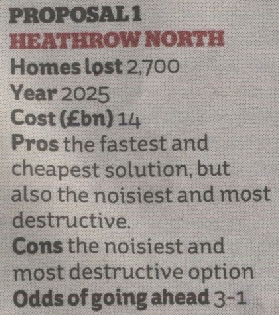 "North" looks to be located south of "North West" on the diagram.

And finally we have the summary of Proposal 3. 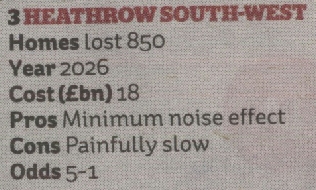 "South West" appears to be east of "North West" and north east of "North". And yes, the minion who drew the graphic got him- or her-self in a directional pickle. Let us fervently hope that, if the plans are ever realised, the powers that be can grasp basic geography and built the new bit(s) in the right place!

Sadly The Independent couldn't quite understand these niceties.

And if you want to see the benefits of modern airport expansion, compare the picture of Harlington (above) taken in 1910 with Google Streetview today. 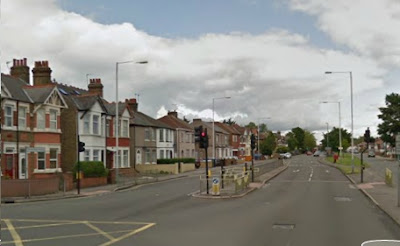 It makes fbb glad that he has moved to Seaton, Devon. And even gladder that the various searches made in connection with his new "pad" stressed that his new house was not within 500 metres of the "High Speed 2" railway line. It makes you really thankful as you pay the solicitors bill!

But there was nothing about expansion at Heathrow ..... ?

On a more pensive note; enjoy this "speeded up" video of ...
... a typical (part) day spent enjoying the airport experience. Sadly the pretty music means you miss all that lovely jet engine noise.

Today fbb is off on his travels; to Rotherham for a celebration. Party poppers, silly hats and dancing in the streets? Our readers will have to just wait and see.