Taking a Pill for Portishead [1]


We are currently unable to bring you our normal website because of technical problems.

We apologise for these problems and hope to be able to provide you with our normal website shortly. This page will be updated as often as possible between 0700 and 2200. Outside of these hours please refer to local radio and television news stations and websites for weather and travel updates.

Due to the adverse weather the Traveline service will not be able to open at 0700 as usual. We are working to get staff on site to resume a normal service as soon as possible.

The Travel South Yorkshire website will be updated with all disruption information once recieved.

We apologise for any inconvenience this may cause.


It was followed by a series of twitters referring to service suspensions all tagged "11 hours ago". Back in the "bad old days" key staff would walk into work to ensure that the public was well informed. Even in the bad Sheffield snows of 1963/4 MOST bus services in Sheffield ran most of the time. Even senior bus managers were known to set off early and walk to work. 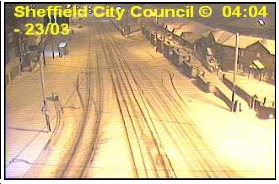 ... whilst the TSY journey planner appears to be showing normal service. 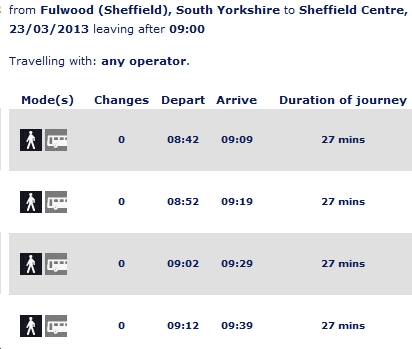 But many services are actually disrupted including the 120 shown above! TSY web site wrong.

TSY web site updated?
But no change in information (or, more correctly, lack of it.)
First Bus web site being updated according to its time stamp; but no change yet in Sheffield infomation.
Cameras now seem to be updating. 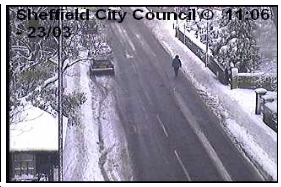 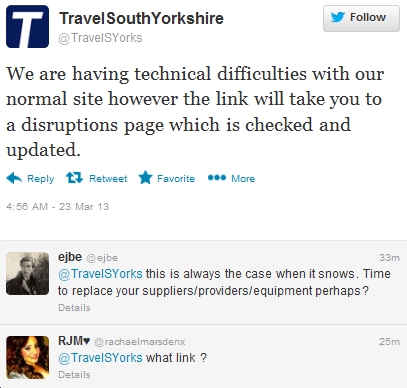 A Pill with Water 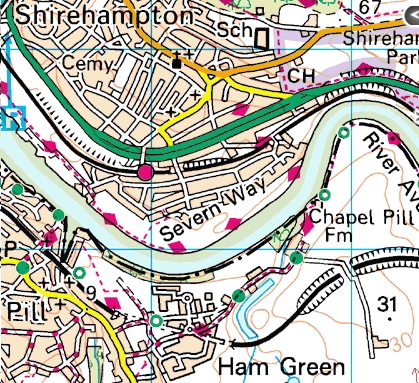 The original name Crockerne Pill means literally 'pottery wharf' and arose from the fact that an industrial-scale pottery thrived nearby. The actual kiln was excavated about 50 years ago and is located in the fields above Chapel Pill. The pottery was made in the period from 1100 AD to 1250 AD and was exported from Pill by boat. 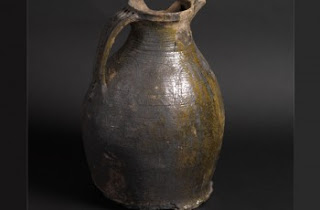 The so-called 'Ham Green' pottery has been found and identified in archaeological digs from the Algarve in Portugal to Iceland.

The town was traditionally the residence of pilots, who would guide boats up the Avon Gorge, between the Bristol Channel and the Port of Bristol. Pill was once home to 21 public houses and was known as being a rough place, to the extent that the founder of the Methodist Church, John Wesley, says in an entry in his journals for 3 October 1755:- "I rode over to Pill, a place famous from generation to generation, even as Kingswood itself, for stupid, brutal, abandoned wickedness."

Faced with such a reputation, it is no wonder that fbb has never been to Pill!

But it was an on-line note about a ferry from Pill across the River Avon to Shirehampton that caught fbb's investigative eye. 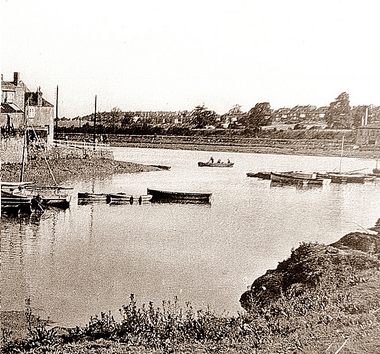 In the centre of the above picture is, indeed, the ferry. It is a simple rowing boat and this particular cossing is at high tide with the ancient hostelry of "The Lamlighters" at Shirehampton just visble on the right. 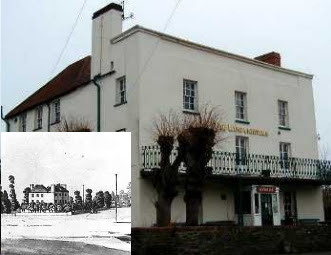 Elsewhere on-line the fares for using the ferry are quoted, sadly undated but probably from early in the 20th Century.

No cars or sidecars were allowed, but the fare for a motor cycle with driver was between 6d. and 9d., while to take a bicycle across it cost 3d.

The summer fare for passengers was 1½d. until 9 p.m. and double fare afterwards. The winter fare was the same, but only until 8 p.m. after which it was double fare.

An aerial view shows the remnants of the slipways clearly visible as they lead down to the water's edge. 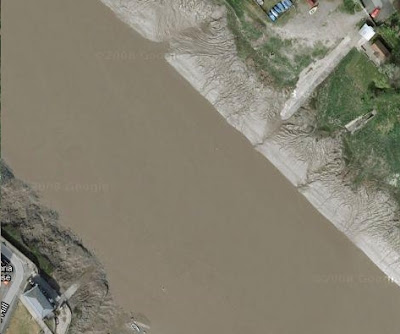 The pathway that led to the ferry is still recognisable as such at Pill ... 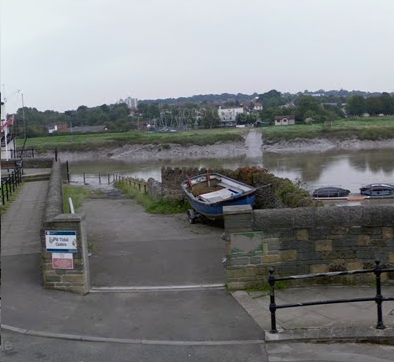 ... and at the Shirehampton slip is what looks very much like an old waiting room just opposite the (former?) Lamplighters Pub. 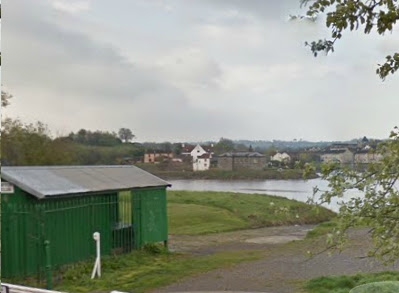 So what happened to the Pill ferry? It seems that it closed down in 1974, after providing a cross-river link since mediaeval times. Quite what the status of the crossing was is not clear on-line; perhaps a blog reader can elucidate? But the withdrawn ferry was replaced by a foot and cycle crossing which is still available today. 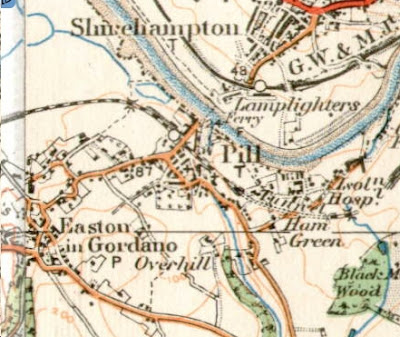 Tomorrow we shall take a virtual walk from Pill to Shirehampton by the alternative route, thoughtfully provided by the Department of Transport. fbb suggests that you take some virtual sustenance as you could be "gone for some time"!

Next ferry blog : Sunday 24th March
Posted by fatbusbloke at 02:00