This P & O sponsored blog-site enthuses about the advantage of ferries over Eurotunnel when snow interrupts rail routes to and from "Le Tunnel Sous La Manche." Admittedly it is dated November 2010, but it might not have been the best page to show to lorry driving chum, David, as he sped towards the M20 and Dover on Tuesday 12th March.

Sensibly, David keeps in touch with various radio and internet travel information services which reveal that, due to heavy snow in Northern France, no heavy trucks are being allowed off the boats at Calais and thus none are being allowed on the boats at Dover. To compound the problem, all train services through The Tunnal have also been suspended! 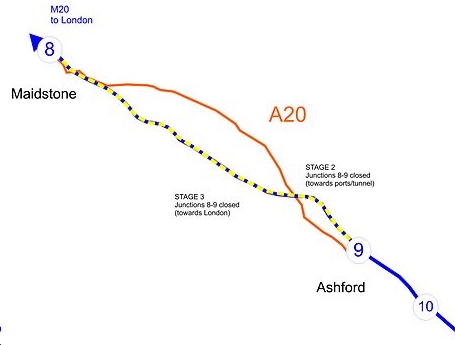 Clearly thousands of delayed trucks cannot be accommodated in the relatively cramped facilities at Dover's Eastern Docks; plus the effect on the roads within the town would be, erm, significant! 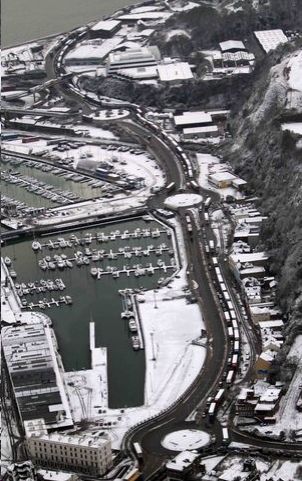 So the Dover-bound carriageway of the M20 is closed to all other traffic must use the "old" A20; and the motorway becomes, effectively, a huge linear lorry park. 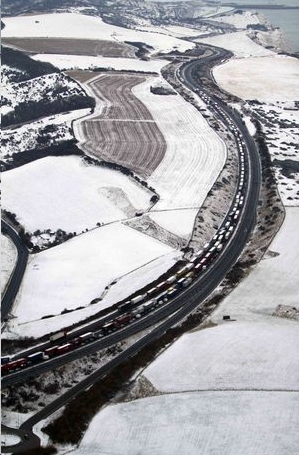 Here drivers are, literally, stranded with no facilities, no refreshments, no toilets (unless you happen to be near a soon-to-be-full-to-the-brim portaloo! Example left, below) ... 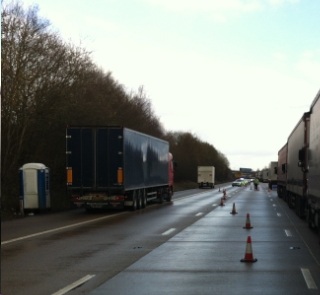 ... in fact zilch! [with apologies to those who are defecation-sensitive, the only other option is the roadside;  gross!]

It is at this stage that divers like David have to switch on their internal drivers hours computer; it's call a "brain". The strict laws do not permit exceptions, even for bad weather or cancelled ferries. The driver has to estimate the implications and plan for his legal breaks. He may chose to book a "relief" whilst in the A20 stack; but then what happens if the authorities decide to open the floodgates and get things moving again? He might find himself driving illegally and facing a massive fine!

TXT : gross delays jct 8 : 13 miles of trucks
many hours to Dover :  from Maidstone services
2000 plus trucks in queue : help

Strategically, David is able to take refuge in Maidstone services before joining the mega-queue. 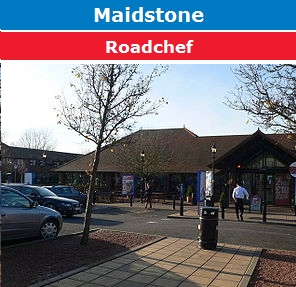 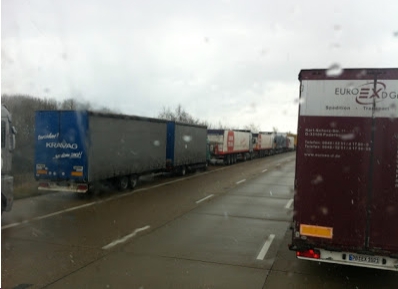 Even when the ferries start accepting bookings, there is a huge backlog and the police release trucks in batches; so David tries to escape to the East and takes "ordinary" roads to Dover where he is unceremoniously sent back to junction 8 to join the queue! He does not have the official bit of paper to say that he has been released from stack imprisonment. 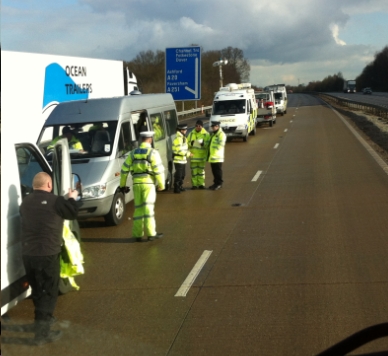 Eventully, mid afternoon on the Wesdnesday, he reaches the head of the queue and is issued with the vital scruffy piece of paper which will let him into the Eastern Docks! 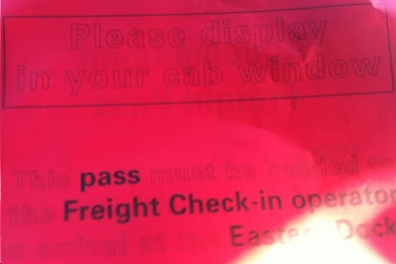 TXT : Back in Dover 5 hours after first attempt!

His normal schedule would have been to catch a later evening ferry on Tuesday 12th then adjust his driving hours on Wednesday 13th to allow him to make his first deliveries in the late afternoon of 13th or first thing on 14th. In the end, after a much delay and frustration, he is able to board a ferry at Dover ...

Just in case a blog reader is about the catch their iDbus, Megabus or holiday coach  and is now having sleepless nightmare interrupted nights about toilet-less stacks on the M20, fbb is assured that passenger vehicles are treated with a little more consideration and allowed access to "facilities", usually at the Dover terminal. It is only lorry drivers that are treated like third world refugees. 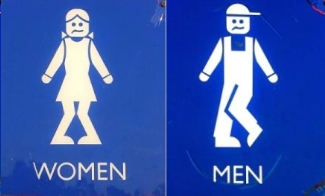 P.S. Eurostar rushes past, having recovered from "la sorte de neige mauvaise" whilst David still queues for his ferry. How annoying is that? 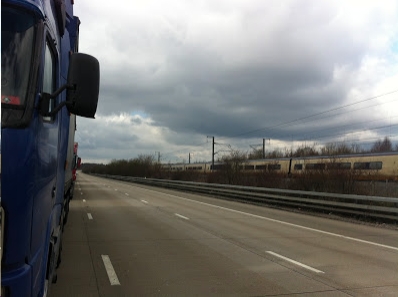