A Fankle in Fife 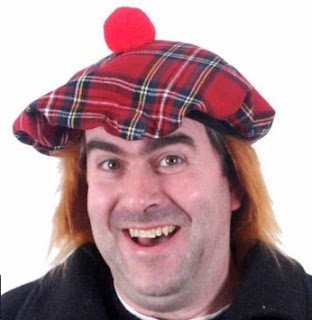 Hamish Munro of Kirkaldy
Thinks bus information is shaldy.
The times to Tower Bar
Are well below par
When can he enjoy a wee taldy?

There are plenty of buses between Kirkcaldy (pronounced Kerr-coddy) and Methil near Leven in Fife ... 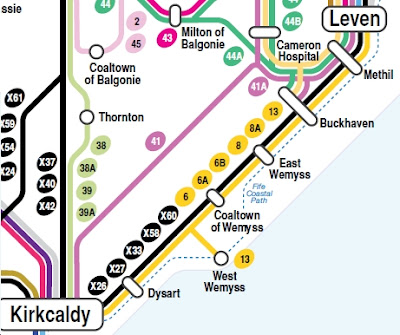 ... but Fife Council's bus map is diagrammatic rather than geographical. There's a map on some of the Stagecoach leaflets, but they, too, give only sparse detail. 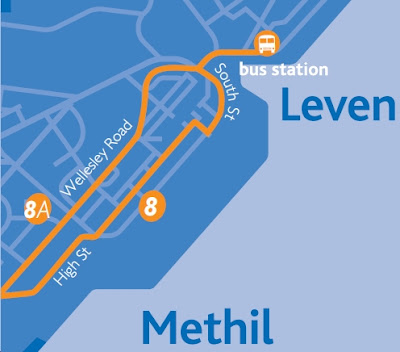 Also, there is an Fife Council enlargement of the Leven and Methil area which is a little more helpful. 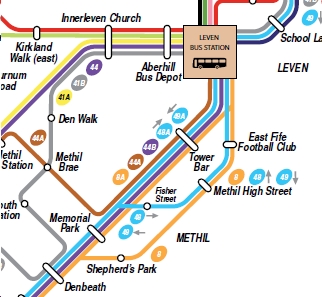 It actually shows the Tower Bar ... 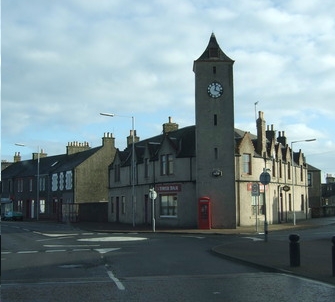 ... where Hamish likes to meet his pals for a lunchtime toddy (or three). What is even better is that bus 8A also runs past Hamish's 'wee butt and ben' on The Fairway, Kirkcaldy. 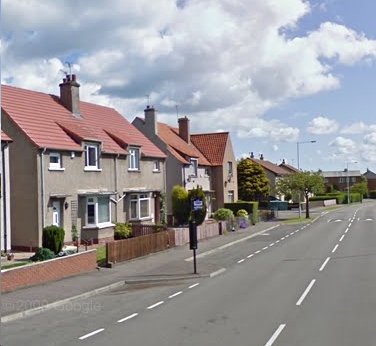 So Hamish can travel to and from his "wee toddy" lunchtime enjoyment without fear of a bag-blowing incident; a simple door-to-door journey. All he has to do is to read his Stagecoach leaflet for services 8 and 8A. This timetable shows one 8A bus an hour. 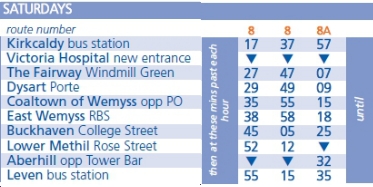 So Hamish cleverly extracts the times of the 8A and writes them on the back of an envelope. So now it's all very clear; except that it isn't. Here are some of Hamish's notes retyped by fbb for this blog. Monday to Friday from home to bar  Kirkcaldy to Leven  is OK; he can understand that.

But coming back  Leven to Kirkcaldy , also Monday to Friday, is less clear.

There's no start to the hourly pattern for the 8A; when is the first xx03 departure from Tower Bar? But the 1403 or, more likely, the 1503 will be OK. What about  Kirkcaldy to Leven  on Saturday?

The problem, dear readers, is that bus companies use the "and then these minutes past each hour" technique to save printing space; BUT they are wont to trim too enthusiastically and leave an element of ambiguity, especially where the timetable has the complication of more than one route.

One way to avoid misunderstandings is to show every journey; but if space-saving is also cost saving, then there are certain principles which should always be applied. A complete set of the times that will be repeated should be shown before the repeat. This would resolve the Monday to Friday times from Leven above.

Likewise a complete set of matching times after the repeat is best; second best would be to ensure that at least the first time after the repeat matches the pattern. Here are the three faulty extracts shown correctly.

Leven to Kirkcaldy  Monday to Friday

The results of one survey being kicked around during the time of the Great Britain Bus Timetable suggested that at least 60% of the populace could not read a bus timetable. When fbb was contributing his two penn'orth to the halls of academe, the maths syllabi always used bus timetables as a practical example of the usefulness of simple arithmetic. But probably no longer.

The recent CILT survey suggests that print is still the preferred option of Joe Public even if bus managers can hide their inactivity behind the dubious glories of the interwebnet. See Busing's piece from Good Friday (read here).

Maybe more people would understand timetables if they were, erm, understandable?


Next Bus Blog : Monday 1st April
-----------------------------------------------------
P.S. fbb usually finishes his daily blog the previous evening and sets the fiendishly clever gubbins to publish it at 0200 the next day. For what the industry often calls "operational reasons", tomorrows effort will appear, bits and bytes permitting, at 0600. Unfortunately the post was released in error (briefly) on Friday afternoon due to digital (fingers) and digital (computer) imcompetence. fbb apologises unreservedly to First Bus and Transdev for breaking the news embargo. 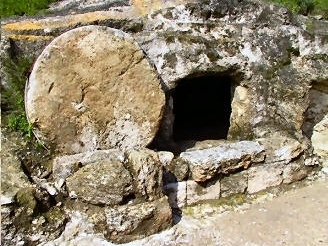 There is no particular need to challenge the veracity of the various narratives referring to the empty tomb. The reaction of those who went to complete the interrupted burial rituals was a mixture of fear, frustration and confusion. None of the initial reactions countenanced a resurrection.

The challenge is how best to interpret what they found.

In the end there a only two possibilities. Either Jesus did rise from the dead, however unpalatable that might be to the cynical secularist; OR he didn't rise from the dead. Both options provoke a series of further questions.

But if he didn't, there really is only one further query that matters. Why did no-one produce a body? That would be the drop-dead easy way to scotch the resurrection rumour-mongers at a stroke. Why not a "cunning plan" to produce a badly battered replacement body? Accounts reveal that the temple spin-meisters bribed the guards to keep quiet and began mendacious rumours that the disciples had stolen the corpse. But they did not arrest a single follower of Jesus. Why not?

The (interpreted) truth seems to be that even the enemies of Jesus had to accept that the empty tomb was, literally, a super-natural event.

The implications are huge, not least for the eternal future of you and me and the world itself. 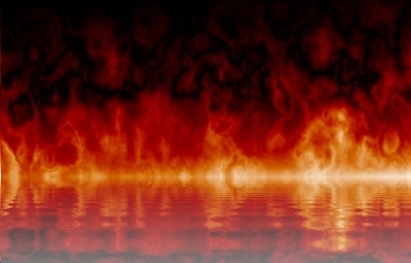 Laughable ludicrous imagery or an attempt at the terrifying truth? The empty tomb means we all have to decide.