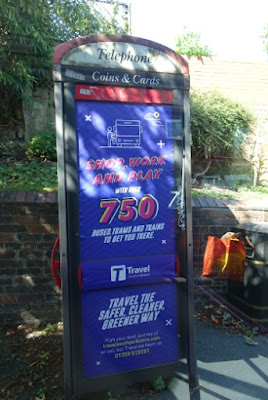 In some parts of GB, operators have come round to the idea that "It's All On Line" is an inadequate way of encouraging passengers back to the buses after they have been terrified into staying at home by Boris and his chums. fbb has reviewed stuff from the North East, from the Isle of Wight and from Cornwall in recent blogs. In these places printed timetable booklets and individual promotional leaflets have been provided and are well used by potential passengers.
fbb was somewhat discumbobulated by the above picture. South Yorkshire PTE, which has stated vehemently that printed material is "no longer necessary" because (readers, fill in the rest of the sentence) ... has speny money on adverts glued to telephone boxes.

Does the statistical knowledge that 750 buses and trams are ever at your service when you are stuggling to find when the next bus to Acron Drive might run. (Try looking up a bus from Sheffield Centre to Acorn Drive, either on line or on downloadable print!)

How about spending money on a few leaflets?

But now, something more positive appears ... 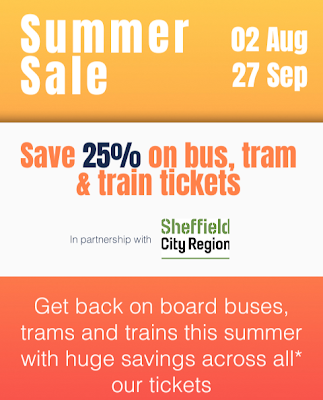 ... a cut price fares offer for August and September! 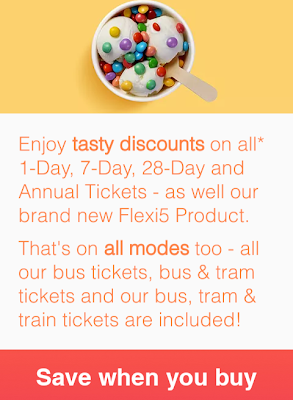 So let's contrast and compare, using as out basis the one-day "rovers" advertised at their normal prices. This is just a sample; day ticket on left, weekly ticket on right.

Day ticket Sheffield, all operators but NOT tram 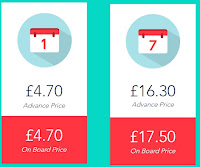 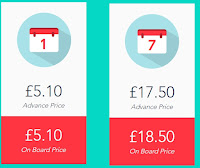 Note you have to pay 40p more to use the tram - so much for a fully integrated network. Then in Doncaster, a much smaller network ... 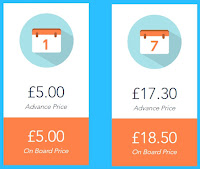 But here are the bargains ... 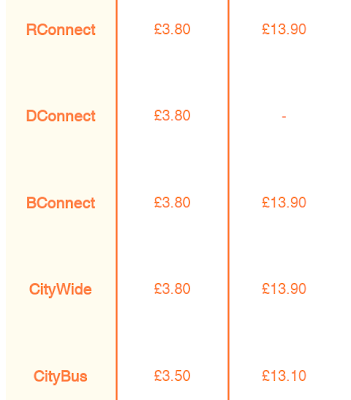 ... with Sheffield cheaper for more buses than any of the other "Zones". Why poor Doncaster (D for Doncaster - gettit?) doesn't have a weekly ticket is not explained!

But there's more. Now in column two is a new five day ticket, using a smart card, which does not require the five days to be consecutive. 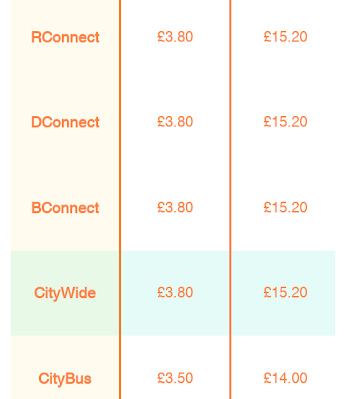 Of course, five days is more expensive per day than 7 days - which makes good sense.

But now comes the good bit. These all-operator tickets are now CHEAPER than the equivalent deals for one operator ONLY versions. Here is First ...

... Sheffield on top, Doncaster below.
And from Stagecoach; bus only ... 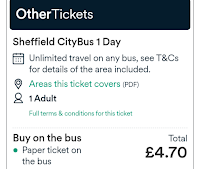 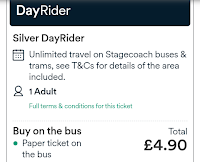 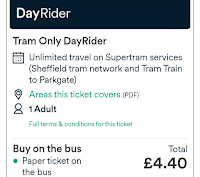 So the PTE offer is a bargain. Why buy Stagecoach or First Bus company-only day tickets (or weekly etc) when you could by an all-operator ticket for less money.

Now fbb has a suggestion for South Yorkshire PTE and the operators. Stop issuing company specific tickets, charge £3.80 for each "zone" and thus get rid of the illogical price structure (cheaper bus in Sheffield, extra for the privilege of using the tram.)

fbb thinks that this would be a step towards ... 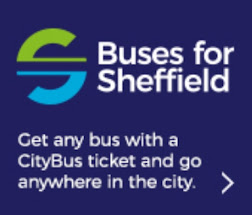 ... what was promised and never delivered a while back. Yet another abortive integration scheme that has foundered on the altar of commercial operation:-

One city. One service : Buses for Sheffield have co-ordinated Sheffield’s bus services to provide a unified service that works for everyone. By working together, we can offer more frequent bus services (up to every 10 minutes in some cases) on key routes in the city, and provide more efficient services to make life a little easier for our customers. 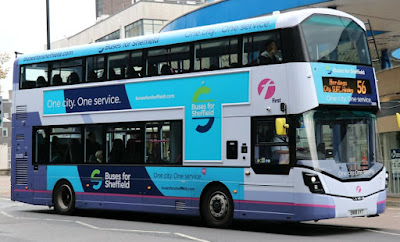 Buses for Sheffield, and the Sheffield Bus Partnership before that, have proved totally ineffective at bringing the two main operators together.
Remember Optio Red and Optio Orange? Optio Red was revealed nearly ten years ago! 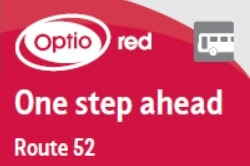 It offered fully interavailable tickets for just one route, later joined by a second, branded orange. It was allowed to fade away before being quietly withdrawn.
Since the brief bonanza of Buses for Sheffield, First Bus has changed its livery and the "One City, One Service" promotion shows to sign of re-appearing.
But one interavailable ticket (one cheaper ticket) for ALL Sheffield (or all Rotherham, or all Barnsley or all Doncaster could be the start of something really big. 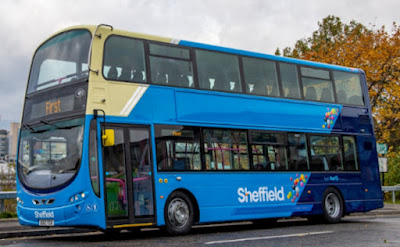 It is such a pity that Stagecoach have given up branding ... 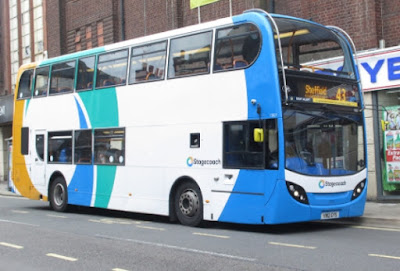 Sheffield could have fully interavailable fares, the same livery and really present a unified network without political involvement.
Do people in Sheffield really care what operator runs their bus home of an evening?
The Truth Is Out ; He Has Got Gout
fbb could include a picture of his left foot, swollen, bright red, yellow, purple and flashing on and off. But it is really too revolting for public consumption! Anyway the GP has prescribed a short course of pills (prescribed by telephone call!).
The sudden twinges are quite debilitating, so blogs might well be a bit shorter for a while to provide time for fbb to say "ouch" very loudly!
He also needs time to take in two pages of A4, closely printed with warnings of possible side effects and consequences of the minuscule pills. 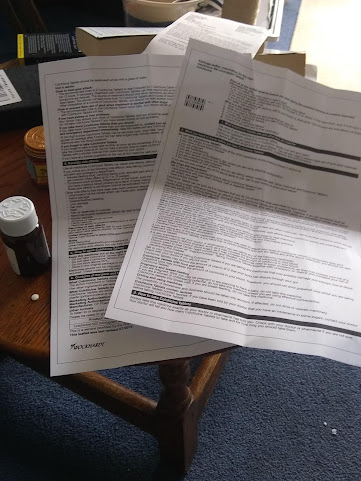 Note mega pill and pillpot on the left!
Just to make the point; fbb only imbibes alcoholic beverage occasionally; maybe five or six units a year! But, even so, please don't tread on the left toe! 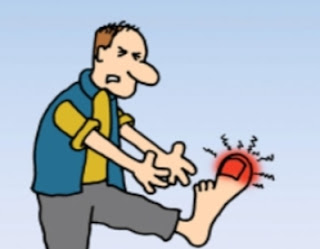 It does mean that the trip to Exeter's new bus station is further postponed. So, tomorrow, fbb will cheat! 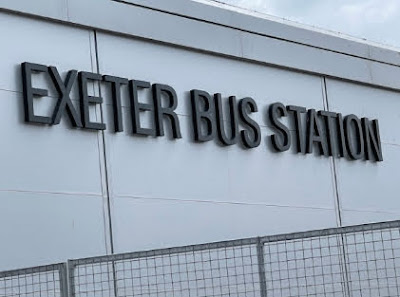 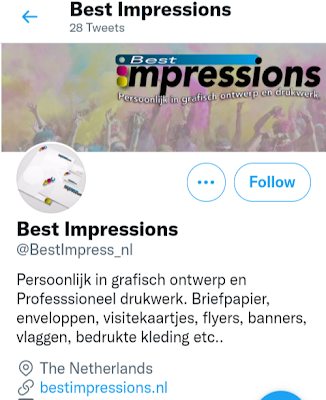