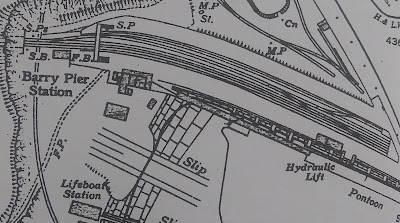 This is Barry Pier station on a super large scale map. It shows it at its peak with double track through the tunnel, two platforms with two sidings in between, station building at the left hand end and a footbridge. Bottom right we see the floating pontoon and the hydraulic lift.
The giant stone pillars cab be seen along the waterfront side of the pier. Some of these features can be seen in this photo extract. 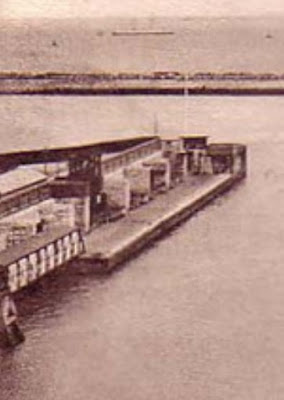 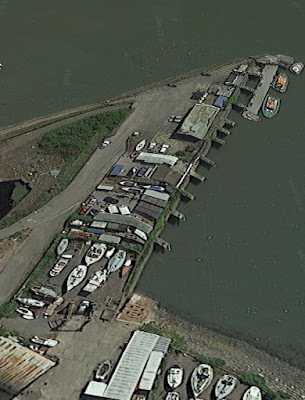 ... not a lot remains. The stone "blocks" are still evident and there is a much smaller pontoon at the outer end.
At ground level we see the grey pilot boat station and the RNLI Lifeboat buildings in blue. 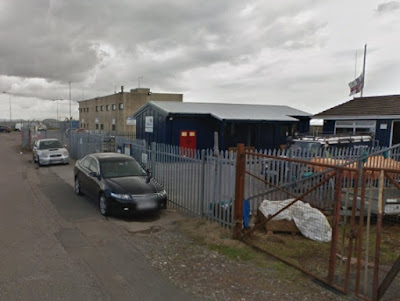 Turning through 180 degrees all is Sailing Club. Somewhere behind the Nissen style workshop should be the tunnel to Barry Island station. 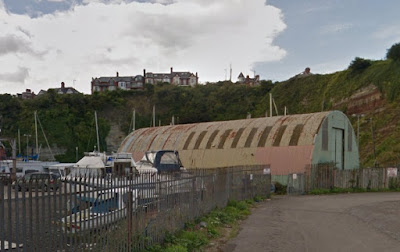 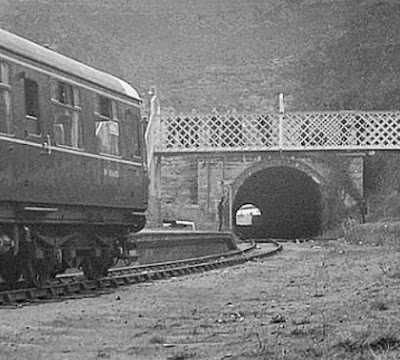 Google Streetview appears to show only a boat park ... 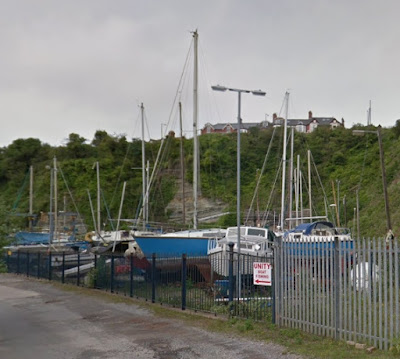 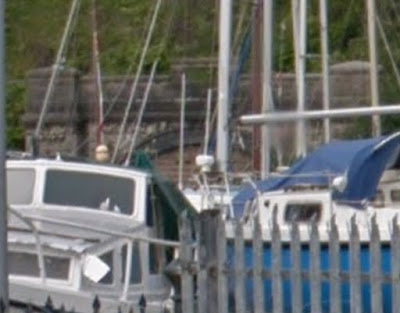 ... and the only obvious reminder of Barry Pier station.

But there is more to this location than the happy memories of pier, trains and steamers - and it is a bit of mystery. More to come later in the week! 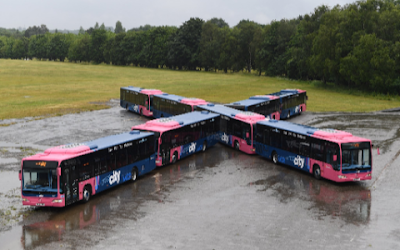 It is a cross? Sadly not biblical! Go North west is parading buses in its "Cross City" (Cross - Gettit?) route 51. 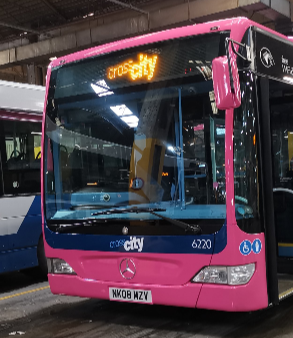 Service 41 runs from Middleton via Crumpsall to central Manchester. 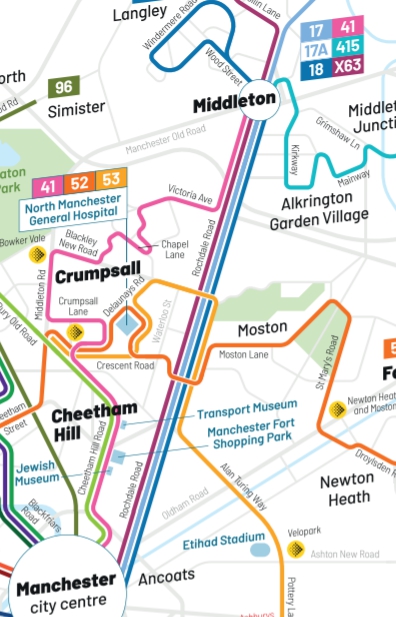 The route then continues to Sale via West Didsbury. 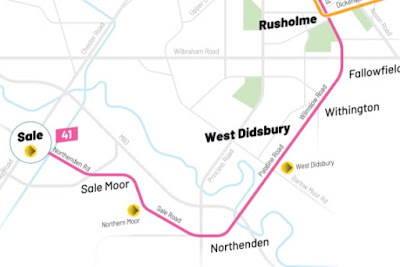 It was promoted by first (and so branded) ... 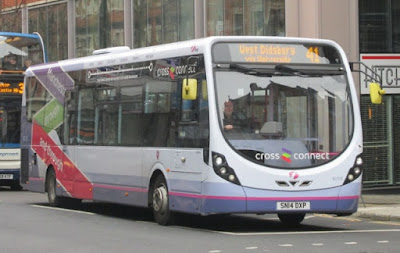 ... as "Cross Connect". First told us that it was to be first of  a developing network of cross city services "encouraged" but GMPTE. It was the first of one!

Go Ahead seem to be making a better fist of PR for the 41. 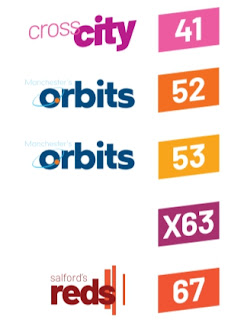 fbb had not picked up the "Salford Reds" brand and could find no evidence of branded vehicles. 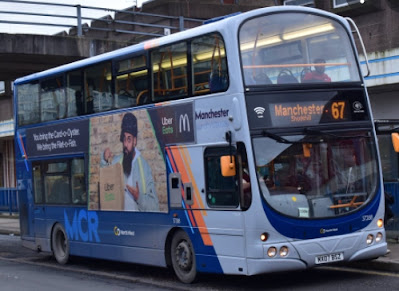 Maybe a Mancunian blog reader could advise?
Crumpsall was the location of the Co-op's biscuit factory. 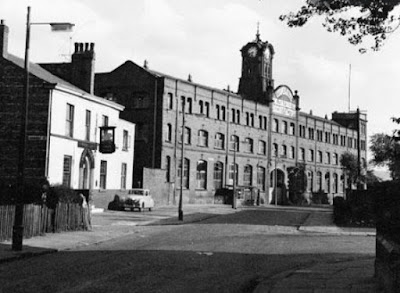 The name was used as a brand. 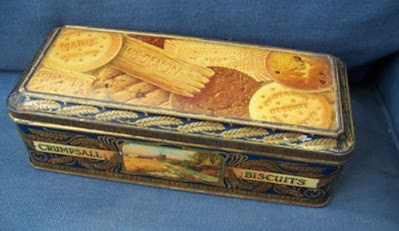 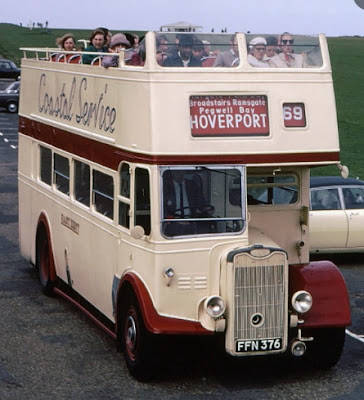 When fbb last rode on an open top bus in Ramsgate it looked very much like the picture above, and a teenage fbb did, indeed, ride to the Hoverport.

From memory, the terminal was much smaller when fbb visited. Whatever happened to the bright big hovercrafting future of cross channel travel? 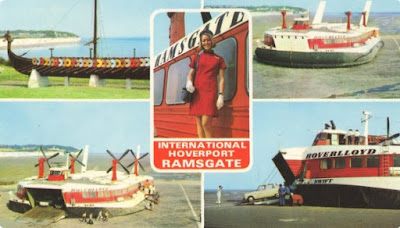 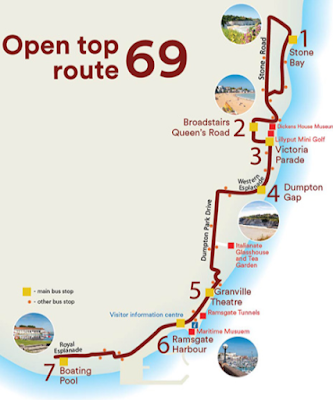 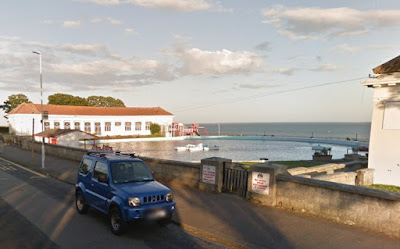 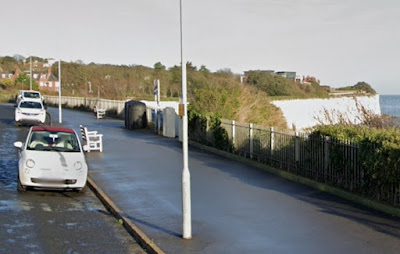 The pull up from the Harbour (or the ride down) is one of the best bits ... 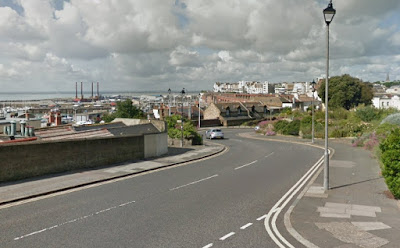 ... and the retro liveried bus is rather fine as well. 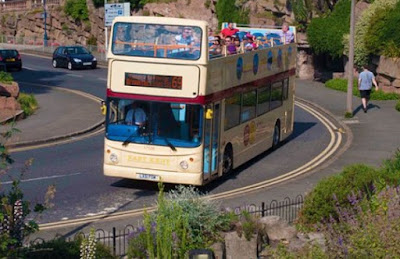 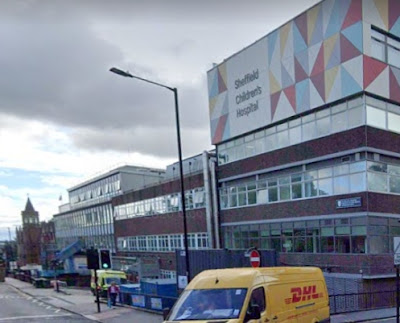 fbb has a real soft spot for Sheffield Childrens' Hospital. No 3 son was rushed in as a baby and came so close to death - in fact if it wasn't for an observant nurse who spotted that he had stopped breathing he would not have survived. There was much prayer by friends, Church and many groups unknown to the fbbs but joined in a wonderful link of Christian faith.
It turned out that he only had one kidney and a severe infection had put his life on the line. The fbb's were warned that the plumbing to the one remaining kidney was damaged beyond repair, therefore to expect a sickly child with the possibility of dialysis for the rest of his life.
Don't the pipes ever return top normal? Asked fbb. "Never, sadly" the Doctor replied. He explained that it was like a balloon that, once deflated, never re-assumed its balloon shape or flexibility.
After months with a stoma (urinary tract safety "hole") the time came to replumb and remove the "overflow".
The little scrap was in surgery for a much longer time than expected.
"Sorry about that," said the kindly surgeon, "but when we came to do the work, all the tubes has returned to normal and we had to do a more difficult operation; there was no spare to spare."
It had never happened before in medical history.
So here is part of the Hospital's current fundraising campaign which involves decorated bears. 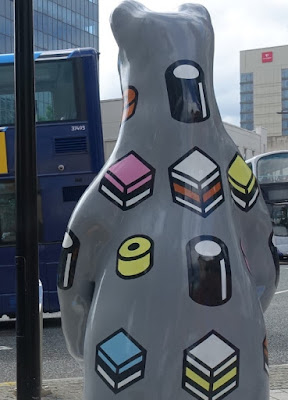 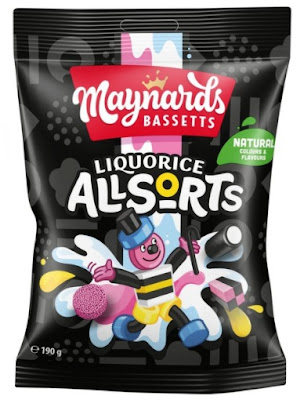 ... and still made in Sheffield but as part of the huge Cadbury's conglomerate. 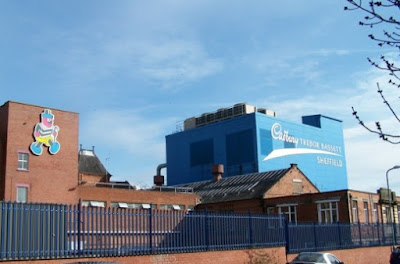 No 3 son is now 40 and in excellent health.
His survival against all medical odds is why you will NEVER convince the fbbs that miracles do not happen today. God is not a slot machine, but he always has stepped into to our universe to make impossible things happen to fulfil His plans, His plans, not necessarily our demands!
I know who holds the future,
and He’ll guide me with His hand;
with God things don’t just happen,
everything by Him is planned.
So as I face tomorrow,
with its problems large and small,
I’ll trust the God of miracles,
give to Him my all.
(Chorus of a well-known hymn)
Next Wearside blog : Monday 12th July
Posted by fatbusbloke at 02:00