Shouldn't we be much more brave in  our cities? 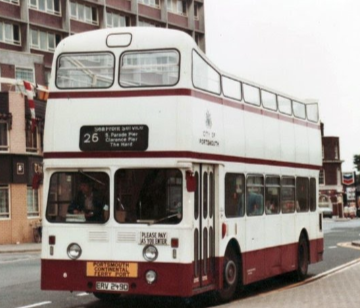 Back in the day, City of Portsmouth buses ran an open top sea front service operating beside the seaside between Portsmouth centre (various termini, historically) and Eastney ...

... or a bit further to the little ferry across to Hayling Island. 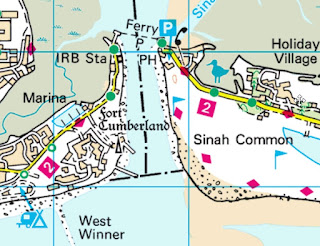 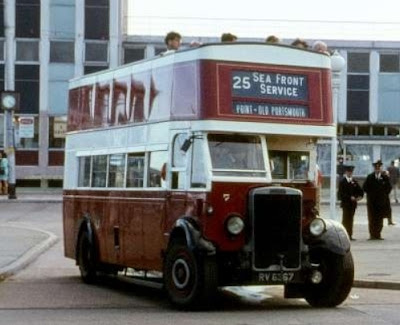 But it hasn't run for nearly ten years - shame!

Then up pops this:- 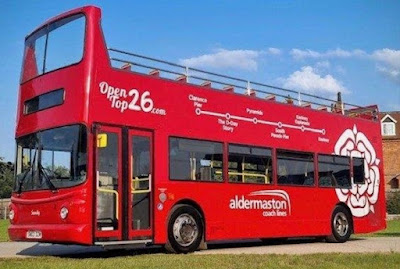 ... said: ‘I can't wait to see the open top bus on our seafront again. I hope that this service will bring back many happy memories and create new fun memories for people travelling along the seafront on an open top bus for the first time.’

Owner and managing director of Aldermaston Coaches, Nick Morton, added: ‘As a child growing up in the late eighties, I have many fond memories of riding the open top buses along the seafront. The last open top bus to operate on a similar route was curtailed back in 2012.

Aldermaston Coaches and Southern Coaches would apper to be business bedfellows. 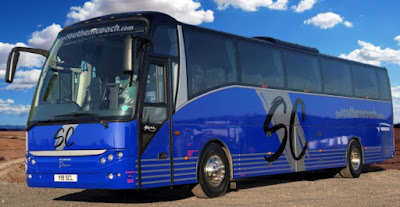 The 26 runs from Clarence Pier to Eastney ...

... every hour with and out-and-back running time of 45 minutes.

fbb guesses that the above represents the best you could get out of a one-bus-in-steam operation - and further hopes that the bright red beastie doesn't go "poorly" like Hastings 66!
As is usual these days, prices are quoted for a hop-on-hop-off day of sun-drenched fun with no mention of "ordinary" fares for those who just want one ride!

You can still ride a route 25, this time from First Bus and not open top. 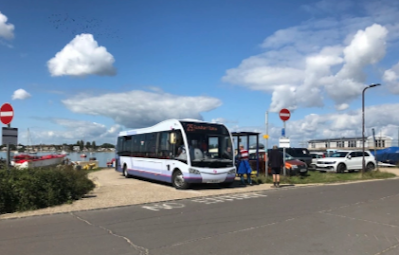 First were provided with a bag of fivers by Portsmouth City Council to re-instate a bus connection to the aforementioned Hayling Ferry. It runs an inconvenient every 45 minutes ...

... and you need a separate timetable to find out which journeys actually connect with the ferry. 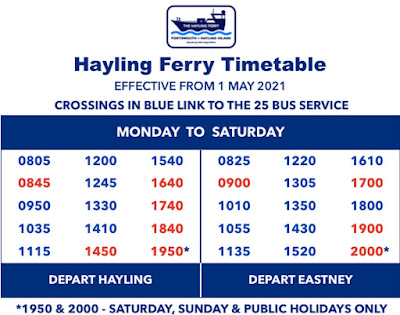 The 25 nakes no pretence and being a sea front service as it was created by mopping up a few bits and pieces that ran via Eastney ...

... and should you think of going for the ferry and bus combo, please remember that on Hayling Islend itself you have a reasonable walk to the fleshpots of South Hayling or mayber Stagecoach buses back to humanity at Havant.
But lurking in the dimmest recesses of Portsmouth's public transport network is another service 25! Bet you didn'y know that. Well neither did fbb until so informed by kind correspondent Alan (NOT from Northampton or from the IoW!).
Frankly, you would have to be a dedicated route basher to try to "cop" this one. 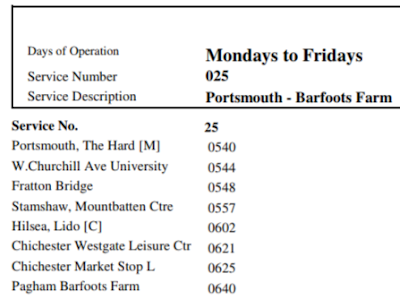 Pagham? Barfoots Farm?
Well, there is Pagham, a tad west of Bongor ... 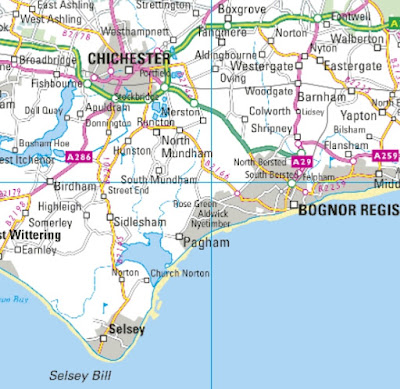 ... and, courtesy of Google Earth, there are some mega sheds (top right in pic below) which are labelled Barfoots Farm close to Nyetimber, a Bognor suburb. 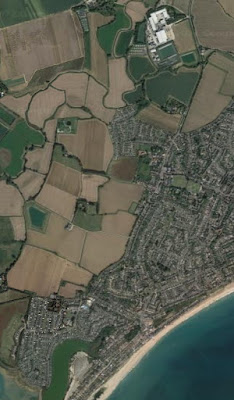 Look, there is a gurt big lorry exiting the site with some of the farm's products ... 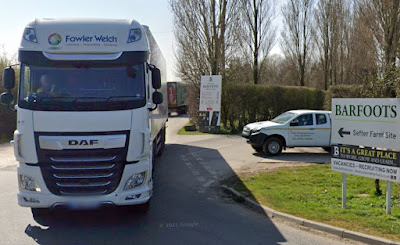 ... and it really is a farm where they grow stuff, yummy stuff, it would appeear! 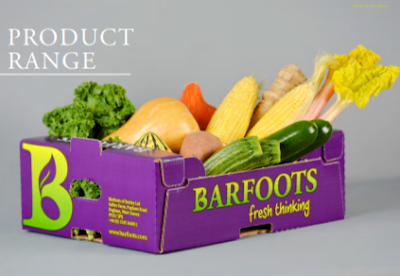 And if you like a video of mysterious machines harvesing sweetcorn for Messrs Barfoot, here is one.Google maps also provide the useful information that Stagecoach 600 (Bognor to Chichester) ... 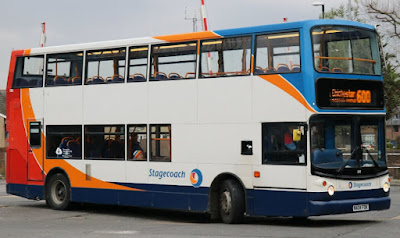 ... stops just along the road from the farm entrance. The stop may well be called "Sefter School", which is (or was!) the building on the right. 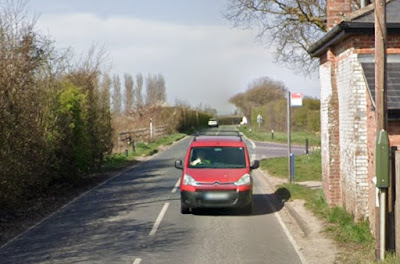 Even better, the 0655 from Nyetimber would give you just enough time to escape from the farm and find the stop. You would need to wait opposite the former school and its flag as the Chichester-bound stop is unmarked. 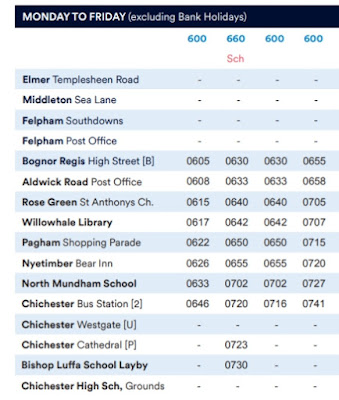 Being a works service, you could try doing the evening run back to Pompey.` 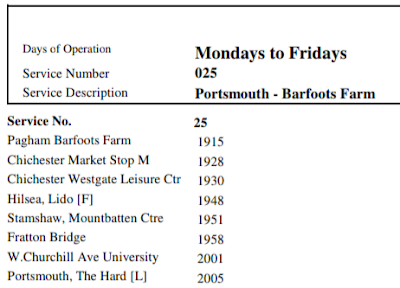 One way or another, a nice round trip.
Happiness Is A Town Called Hexham
It is if you want good public transport information. 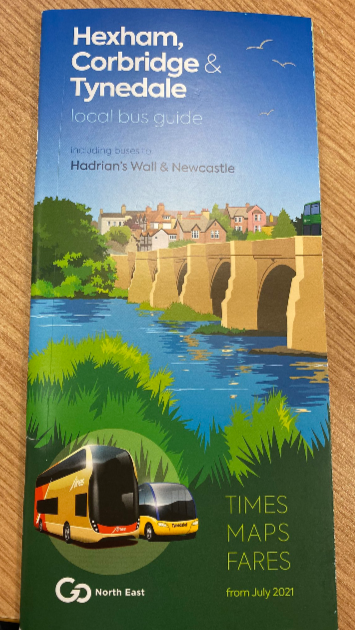 Go North East has produced (with a definite touch of the Stennings) a very good bus timetable booklet to encourage passengers to build back better and use the bus. (Stagecoach and Arriva please note!).
Within the booklet is a splendid network map of the Tynedale area and its bus services ... 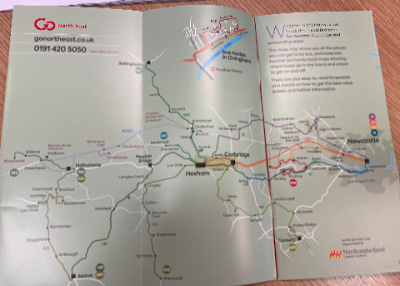 ... a more detailed map of Corbroidge and Hexham ... 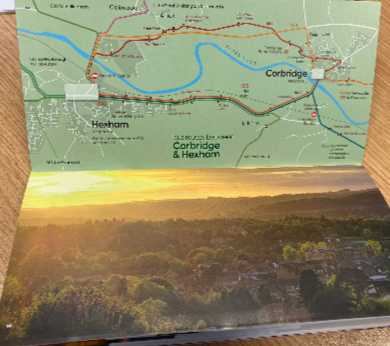 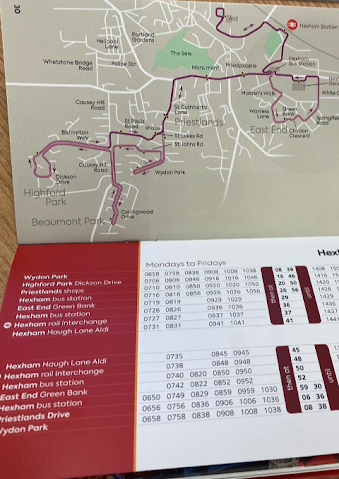 The Hexham town service has its own route map. Excellent.
Let There Be Lights - Again

Hattons, model retailer of Widnes, is developing its range of "Genesis" generic four and six wheel coaches. These delightful models are not yet available but due before the end of the year.
Meanwhile, Hornby ... 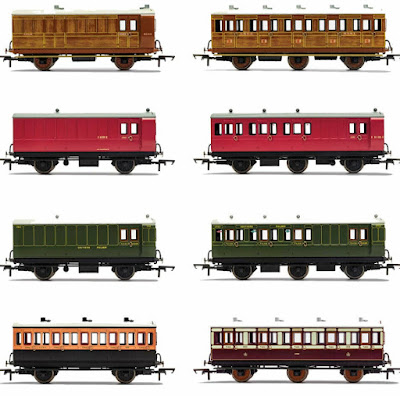 ... has developed a range of generic four and six wheel coaches that look just the same as Hattons, at least they do from normal viewing distance! They are on sale now.
But they aren't quite the same. Both companies provide the option of adding interior lighting to the coaches.
Hatton's will draw current from the tracks, whereas Hornby's are battery powered. The slight snag with Hornby's versions is that their battery "box" intrudes into the somehat "basic" modelled seating units. 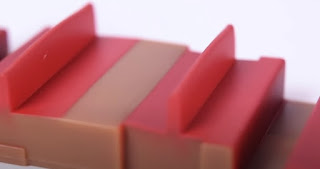 No such "lump" will be found in a Hatton's coach! Their interiors are better.
But the bonus is that Hornby's lights stay on even if their coach is not on the track or the power is off.
Stay on? Flat battery likely? No way!
The red box marked "Hornby" is a magnet ... 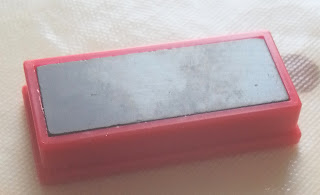 This cleverly "toggles" the light on and off.
So what might fbb be intending to do with a small strip of lights, an electronic thingey, a battery, a magnet ... 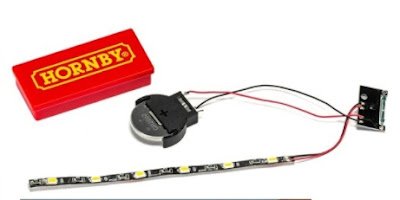 ... but no four or six wheel coaches!
Next Preservation blog : Tuesday 27th July
Posted by fatbusbloke at 02:00