How To Encourage Bus Travel! 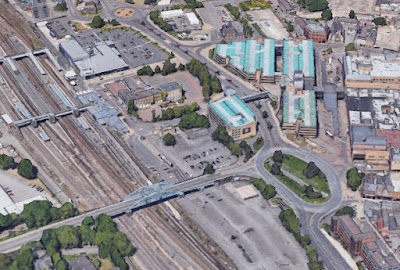 On the left is Peterborough railway station and scanning to the right (to the east) are four buildings with blue painted roofs. These are four multi-storey car parks built to serve the Queensgate shopping centre which is on the far right.
The four car parks were given the names of local worthies, namely ...
Edith Cavell - nurse, cruelly executed as a spy during WW1
Frank Perkins - of diesel engine fame
Henry Royce - chum of Mr Rolls
John Clare - nineteenth century poet
Peterborough City Council then decided to be more "efficient" and used colours to smarten up the whole car parking experience. 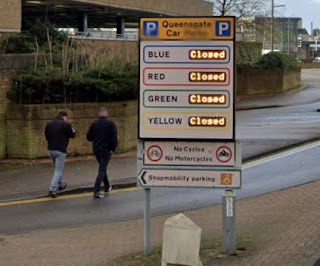 This was met with a certain amount of opposition by the locals, so the Council compromised and used surname and colour together ... 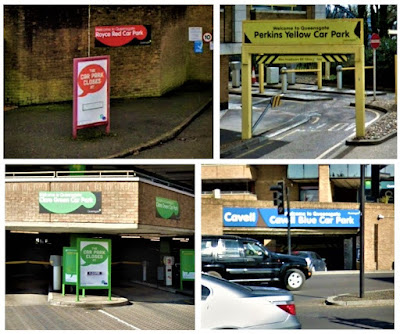 The one you can't read is Clare Green, a delightful girl if ever there was one!
You might wish to find your way from railway station to bus station, only a short walk away says Wikipedia; so it must be right. If you were very, very fortunate, you might find an "onward travel" poster somewhere on the concourse. 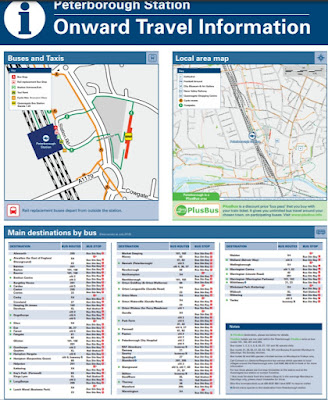 These are not often obvious, if displayed at all - but it is all on line! It gives a simple map of your route from train to bus. 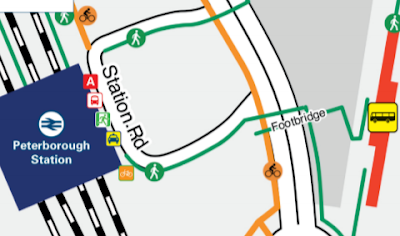 So let's do it!
We leave the station, turning right in front of the three star Great Northern Hotel ... 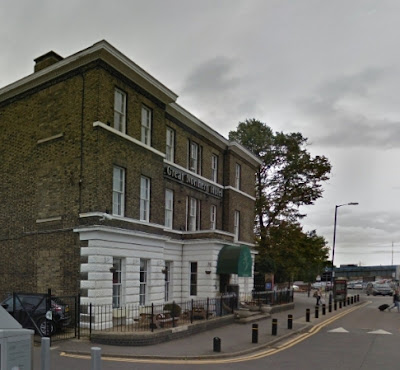 ... probably the only bit of "old" Peterborough to remain in the station area. 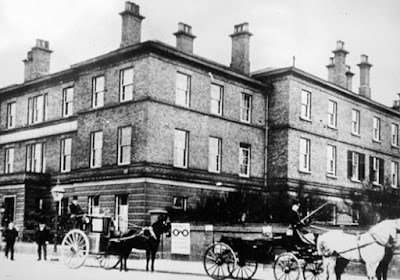 Instead of toddling into the short-stay car park, we must turn sharp left but still on Station road, following the green line and its walking man from the map that we probably don't have.
Here, to offer a little encouragement for our exciting exploration, we find a white on blue sign which directs us to Queensgate Shopping Centre AND the bus station. 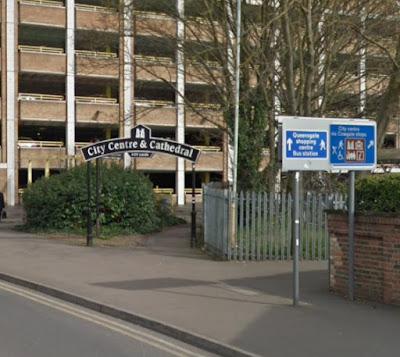 Incidentally, the building beyond the white-on-black sign to City Centre & Cathedral is NOT the cathedral but a building of equally amazing architectural delight, namely the Perkins Yellow car park!
The Cathedral is much further east and rather well hidden ... 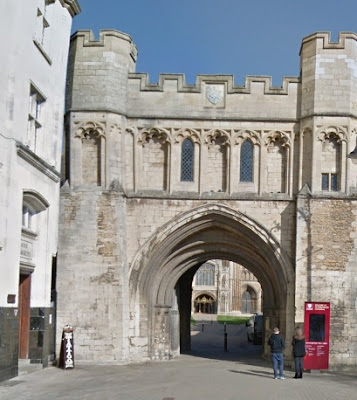 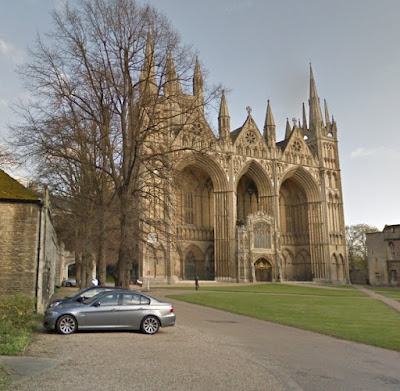 ... but prettier!
So, according to Wikipedia, your route takes you across the Paten Bridge, named after a worthy city resident and owner of a wine merchant's. 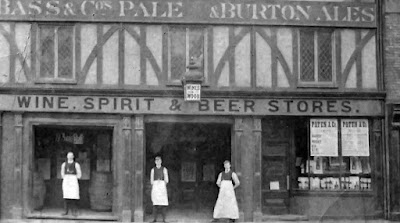 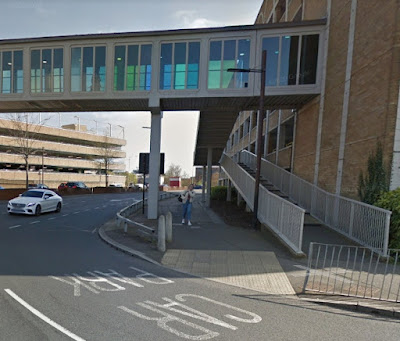 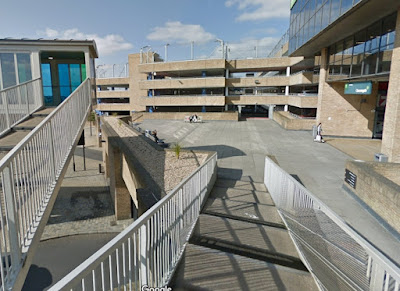 ...  and lo, you will find an entrance to Queensgate shopping centre. 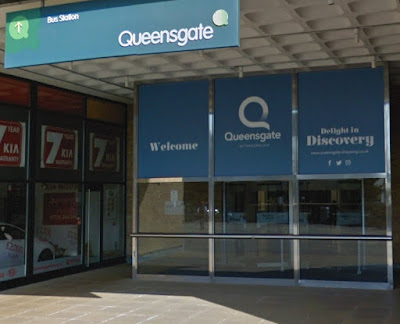 And in the top left hand corner are the desired words "Bus Station". fbb would expect similar signs within the inescapable joys of the "mall" ... 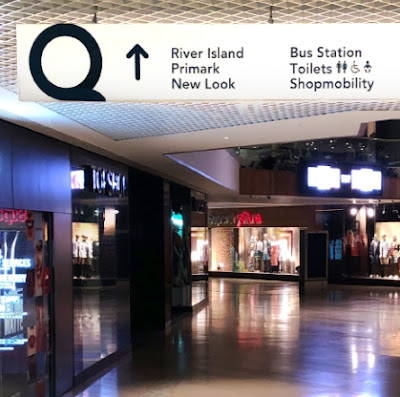 ... but he does wonder how you get there when the shopping paradise is closed. Presumably it is down a bit more rampage, possibly through a creepy car park ... 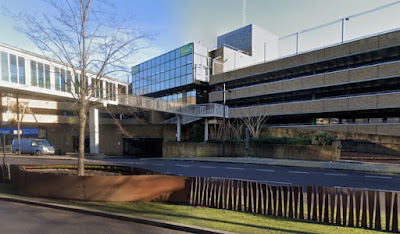 ... and then round the outside of the Cavell Blue? There are, of course, no direction signs!
Assuming you find your way past all the lovely shops desirous of ridding you of your money, you would be directed to descend an escalator within the greenhouse. 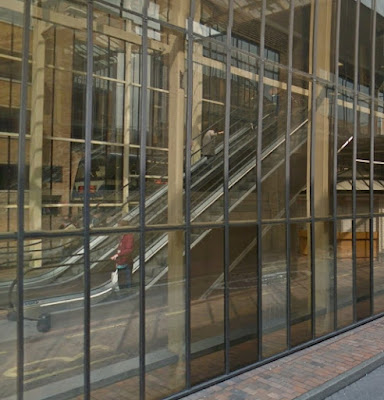 You would find yourself on an island platform, to use railway parlance, with buses on both sides. Each side is a mixture of "parallel parking" ... 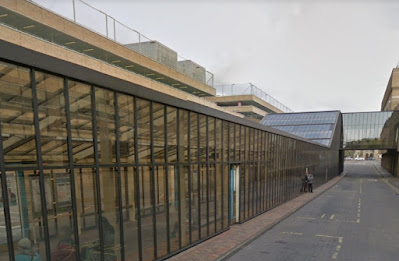 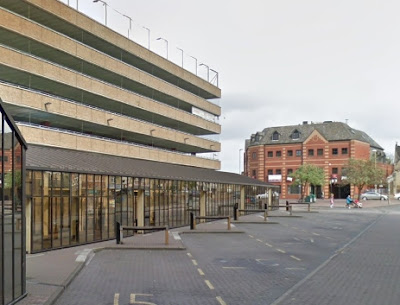 The above pictures are of the eastern side of the bus station, there is similar on the west.
But, if we look at a recent Google Earth snapshot ... 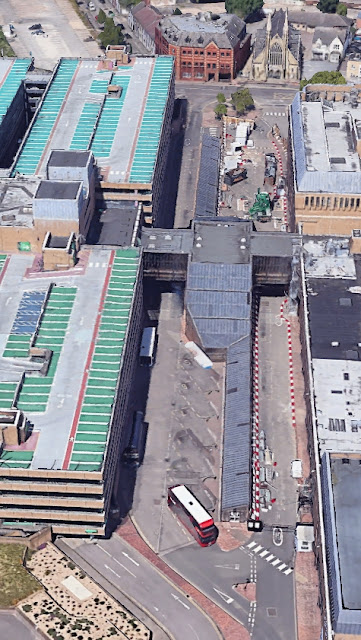 ... we see mayhem in the east!
Where buses once arrived, unloaded, loaded and departed ... 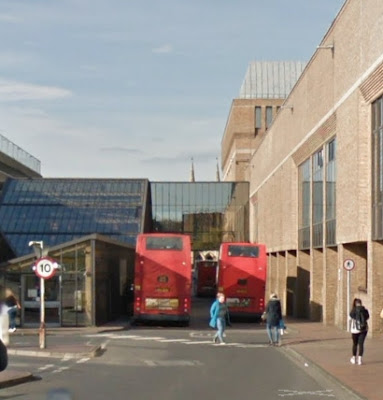 ... and similarly on the far side of the access bridge ... 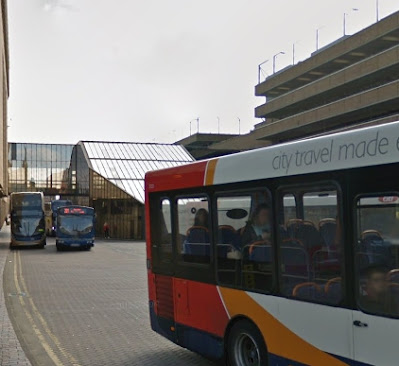 ... buses there are none!
Indeed the view from the north down the eastern bays is decidedly blocked off! 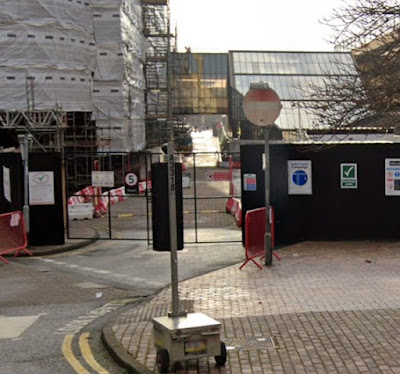 What is going on? Where have all the buses gone? Will they ever return?
Correspondent Alan (the Northampton one!) passed through on Sunday last and can enlighten us.
And will do so in tomorrow's blog.
Thinking About LEDs
fbb lies awake at night thinking of nothing else.
Here is the old man's reading lamp. 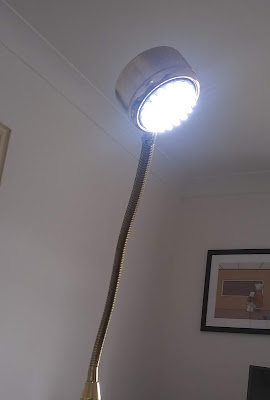 It consists of a cluster of bright white LEDs. 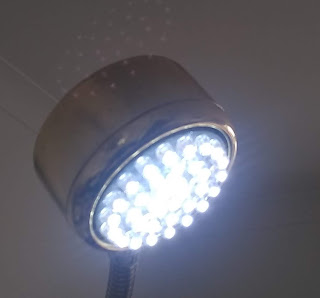 Although each point of light appears fantasically bright, the total volume of lumens is barely enough to help fbb read his copy of Railway Modeller.
Translate this to the Peterville signal box and lights in the ceiling give a reasonable shine ... 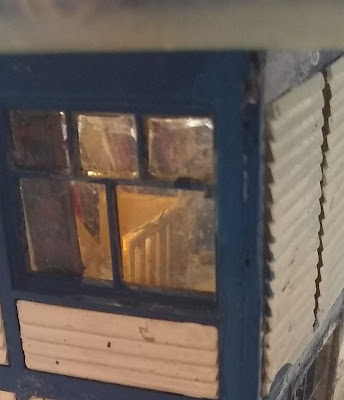 ... brighter than the traditional signaller's oil lamp suspended above his ledger desk, but OK. But the exposed pseudo "bulkhead" light at the top of ther stairs is just too much. 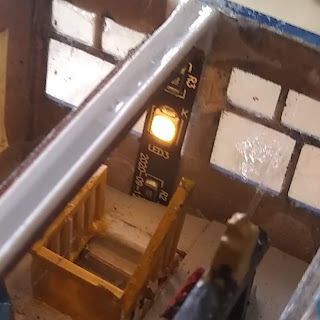 The above was snapped in fading afternoon daylight, so when Peterville's skies are darkened well beyond twilight it will overpower internal realism (?) camera and human peepers.
Maybe a bodge in the form of a square of translucent white plastic will do the job. 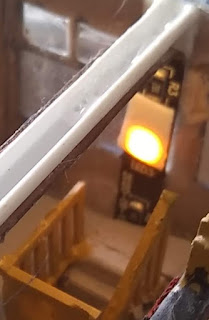 fbb will have to wait until it gets dark! But it is better than it was. 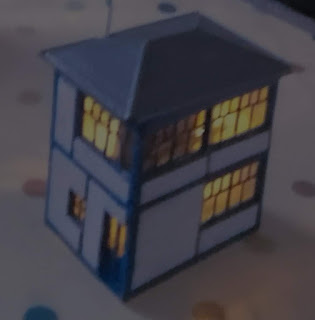 Next Peterborough blog : Thursady 29th July
Posted by fatbusbloke at 02:00