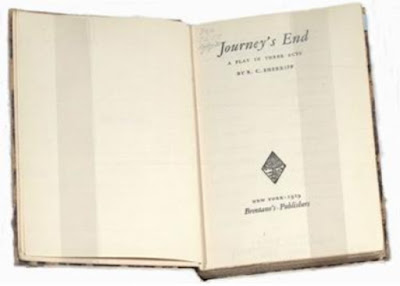 fbb "did" Journey's End by R C Sherriff in English at Northampton Grammar School. The play was set in an officer's dugout during Wold War 1 and fbb can remember nothing of its content, apart from the fact that the dugout collapsed in a bombardment at the close of the action. 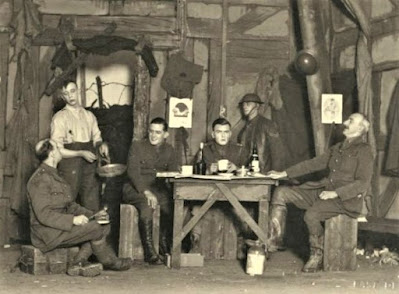 That would make the play a challenge to produce, as the dugout would have to be rebuilt for the next night's performance.
No doubt that terminal event was the "Journey's End" of the title.
The play was first performed at the Apollo Theatre in London on 9 December 1928, starring a young Laurence Olivier, and soon moved to other West End theatres for a two-year run. The piece quickly became internationally popular, with numerous productions and tours in English and other languages. A 1930 film version was followed by other adaptations. He considered calling it Suspense or Waiting, but eventually found a title in the closing line of a chapter of an unidentified book, "It was late in the evening when we came at last to our journey's end".
But This One ... 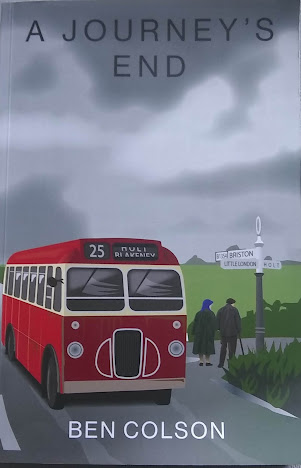 Ben Colson had various jobs in the bus industry from the salad days of his youth and ended up as a Stagecoach manager before forming Norfolk Green, from which he retired, selling the company to his former employers who, sadly, soon  ditched the whole lot. 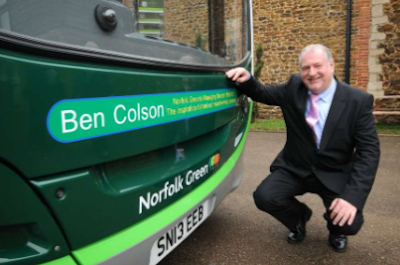 Journey's End clearly applys to the artwork on the cover, as Darby and Joan trudge off down the lane that leads to Holt, having alighted from Eastern Counties service 25. That cover picture looks decidedly computer generated, but fbb did wonder whether the location was real and whither the two oldies might be wearily trudging after their shopping trip.
Maybe the journey's end was a fake? 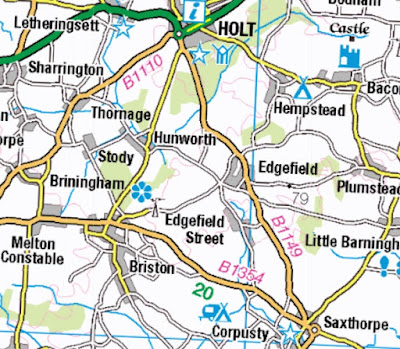 Or maybe at least the location is real. Above we find Briston (lower left) on the B1354 and Holt (top centre, so we need to zoom in a bit and ... 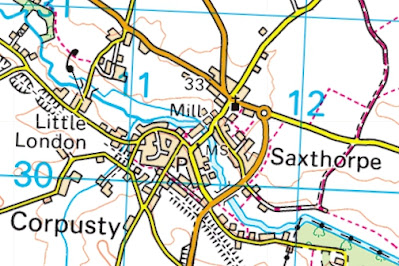 ... there, west of Saxthorpe and Corpusty is one of the dozens of Little Londons in the UK, close to a crossroads on the the B1354 (ORANGE) on the above map, top left-ish. It matches the sign. 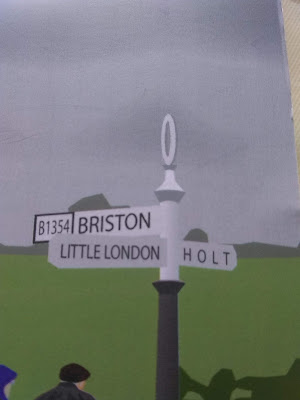 Thanks to the wonders of Google Maps we can go to that road junction and, amazingly find a suitable finger post. 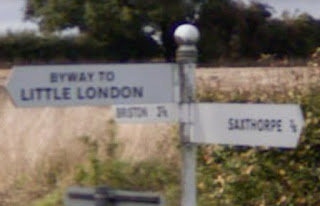 The modern sign has a finger pointing to Saxthorpe, missing on Ben Colson's artictic creation, and modernity has removed a direction to Holt. 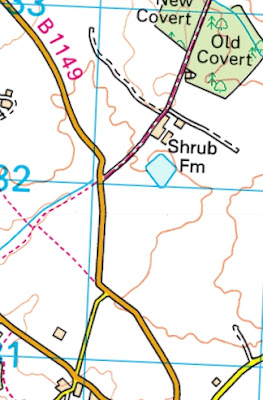 In fact the "Holt" road is called Croft Lane and it runs northbound to the B1149 which does take you, eventually,  to Holt. The pink square building (lower left) is a modern warehouse accesed from the Briston Road. So, unless they are be making making for Shrub Farm along the narroiw lane ... 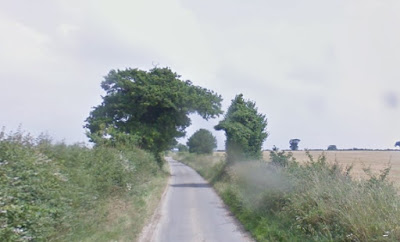 ... they are lost!
Thomas Hardy  Gray (Whoops! Brain failure!) got it very right as he elegised in his country churchyard.
The curfew tolls the knell of parting day,
the Counties bus winds slowly off to Norwich
The couple homeward plod their weary way,
To reach the farm and supper's warming porridge.
Maybe Colson's red 25 did go to Holt (it certainly would not be going to Blakeney!) but todays bus from that remote junction and in the direction illustrated, would be going to Norwich - and you try to find an (in)appropriate rhyme with "Holt".
Today we are in the world of Sanders Coaches ... 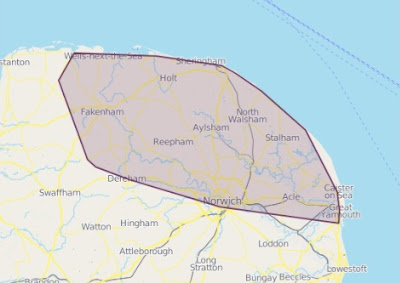 ... and has one of the best websites there is! The map is superb and draws fbb to consider a holiday in Norfolk, remembering his childhood jaunts with family to Sheringham and  Mundesley. But, O, the joy of taking a bus to ... 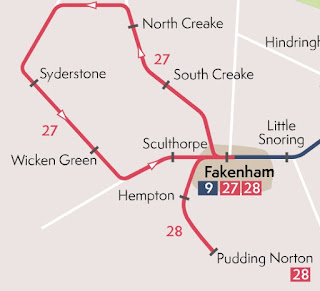 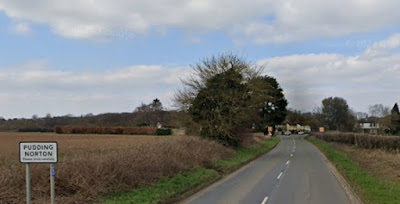 There! It does exist; told you so!
Be that as it may, Sanders' map reveals service 45 and 45A along the road between Briston and Saxthorpe. 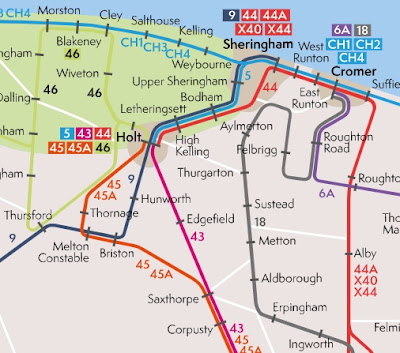 The main route from the area into Norwich is the 44 which starts from Holt, then runs indirectly via Sheringham and Cromer before diving south to the county town. 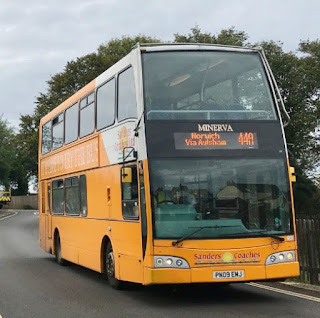 The 44 runs an impressive half hourly frequency. The 43 offers only a very occasional journey whilst the 45 operates via Melton Constable and has numerous variants. Our elderly cover girl and boy would not have much choice today. 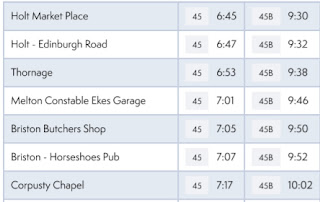 fbb has only shown times to/from Corpusty (neat Saxthorpe) as a guide to the service past the lonely but artistic crossroads under consideration.
There is a school/college trip (0630) and a shopping trip setting off nicely just when the OAP passes are valid. In the return direction, there are THREE journeys (such luxury!) ...

There is a lunch time shopper return and a tea time ditto, plkus the 1819 which is for the college/school pupils grind back home. There are a couple of journeys each way on Saturday, but nowt on Sunday.
But at least the Croft Lane stop is marked on Google maps, so it still exists ... 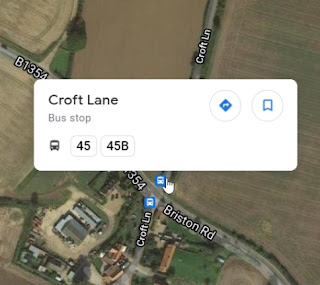 ... and the 45 offers some intriguing country views. 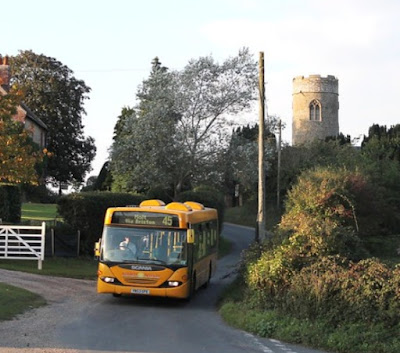 There are 124 churches with round towers in Norfolk, so readers with an evening to spare, or suffering from insomnia, can have fun (?) identifying the ecclesiastical edifice (above) on route 45.

Whilst in the area, we must just mention the railway. 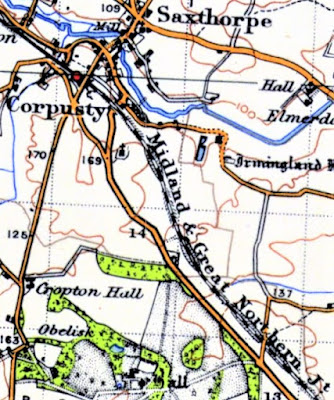 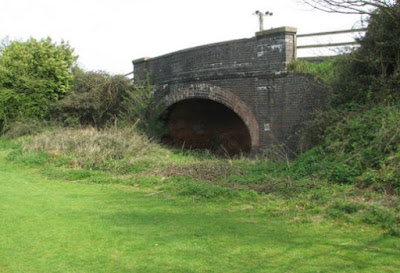 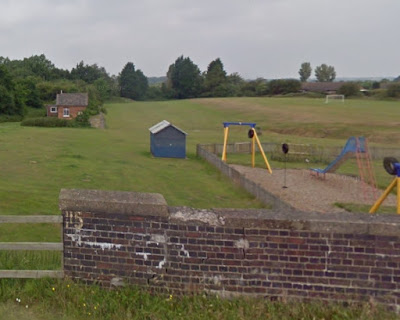 ... is the station complete with a chunk of platform. 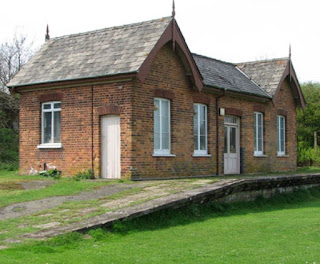 Another Journey's End; it closed pre-Beeching in 1959! 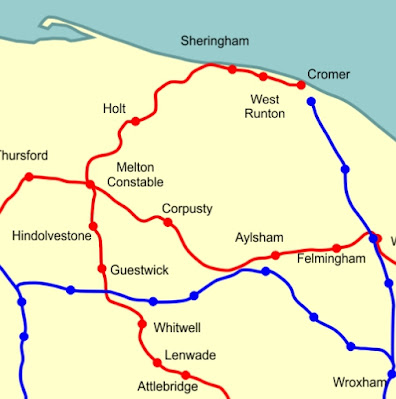 The M & G N was always known as the Muddled and Going Nowhere line in response to its rural nature and paltry passenger numbers. That name did appear on the back of a Norfolk Green bus, of which fbb has seen a picture somewhere!
Oh, yes. Ben Colson's book.
Tomorrow we explore its pages!
Peterville Castle - at Night 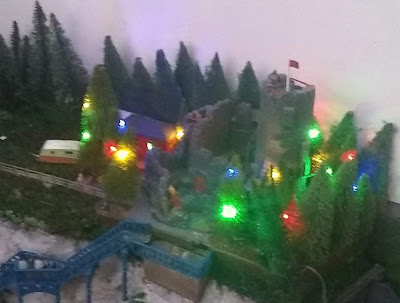 Hmmm - a bit of Aurora Borealis behind the tower to be diffused in some way but the blue looks as if it might come from behind the Pinus Panscubbus. Maybe try again as darkness falls?
Perhaps a night shift on the modelling schedule needs arranging!
And A Norfolk P.S.
The book's cover picture folds over to the back ... 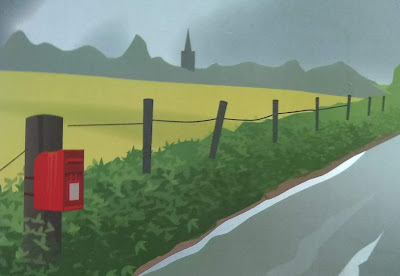 ... but reality does not provide post box or church spire. 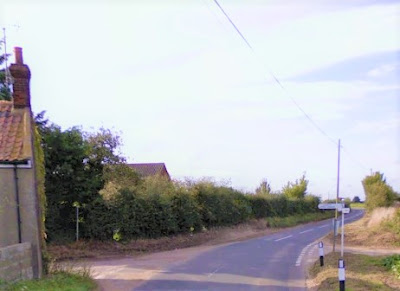