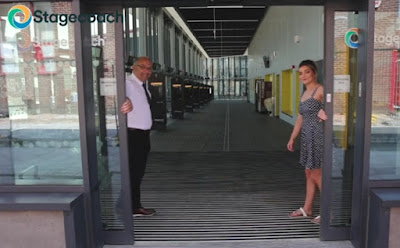 Exploring on-line, you would think that Stagecoach had built it using their own substantial bag of pennies. In fact the owner/builder, Exeter City Council, has appointed Stagecoach as "manager" of the new facility. 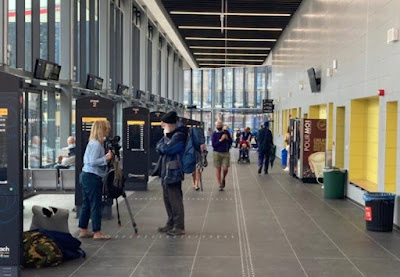 It is slightly further from the city centre and somewhat smaller than the old bus station - with much less space for buses "resting" between trips. National Express, as befits a prestigious inter urban luxury coach service, is banished to a side street!
Yesterday, fbb had planned to visit same, but arrangments for friend Mary's funeral and what would once have been called "a gammy leg, don't you know, old bean" precluded such an exciting expedition.
(Medical Time Out : It is possible that the gammy foot, at the end of the gammy leg, may be gout. fbb is advised to stop smoking, reduce alcohol consumption to only two or three occasions per week and take Ibuprofen. The first two are very easy!) One possible creator of gout is the menopause, so says the internet.
A visit will take place as soon as circumstances and gamminess permit.
We will be visiting Peterborough bus station later this week, but for the time being ...
Remueration, Preservation, Recreation, Re-Creation
Most of us know about Tornado, a brand new A1 class locomotive ... 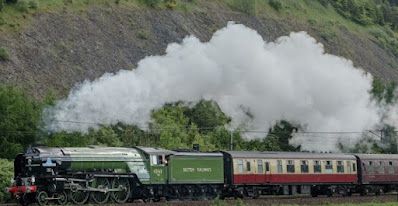 ... built to Arthur Peppercorn's original designs, because no example of this fine loco had been preserved. This blog has also looked at a re-creastion of the former LMS diesel 10000 and other similar projects are under way.
It seems that folk are prepared to dig deep into their bank balances to fund these new builds of old, but missing, beauties!
fbb's interest was somewhat aroused beacuse he found this magazine, dating from 2019 ... 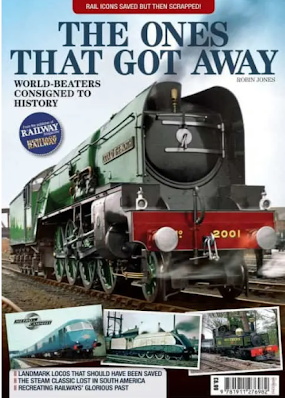 ... carefully filed on the fbb sofa! 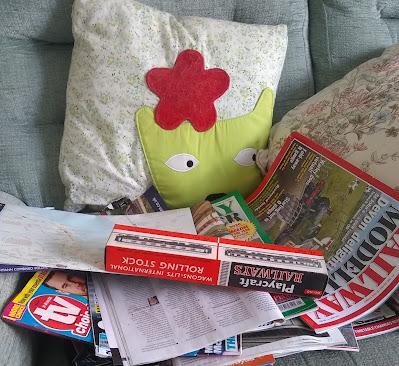 Or was it carefully indexed behind the telephone table? 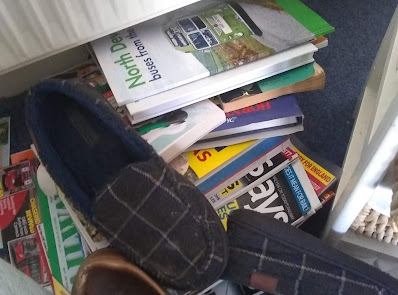 Whatever? fbb has no recollection of buying it and no memory of who sent it! But thanks whoever did.
The headline article is about a follow-on from Tornado, namely a new-build of a Nigel Gresley P2, none of which were preserved.
If you are a dyed-in-the-wool L N E R (that's the old one, not the modern nationalised upstart) enthusiast you will know all about the P2. But fbb isn't and didn't; so read the article with avid interest. 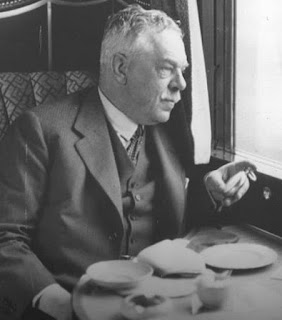 It was all about speed, and Nige wanted a "very big engine" to haul "very big trains" between Edinburgh and Aberdeen. The route was hilly and and curvy whilst restaurant cars and sleeping cars were "big" and "heavy". So many very technical problems needed dealing with.
So he chose a loco design which had eight driving wheels (four on each side, sensibly) to transmit the best tractive effort from steam to rail. Modern engineers use a more technical term; they would say "to give the engine lots of grunt"!!
Cock Of The North was born.

Gresley used the prototype to try out several technologicl innovations. 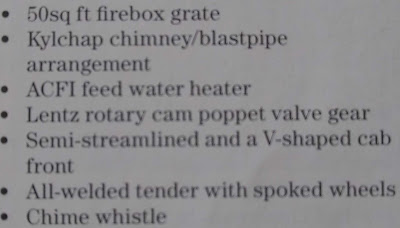 Sadly, fbb would not recognise a Lentz rotary cam poppet valve if he met one on the way to Tesco, but these things were significant way back in 1934.
Later builds ignored some of these new-fangled thingeys and, most significantly added a slopingh front to the P2 as would later appear on an A4 e.g. Mallard. 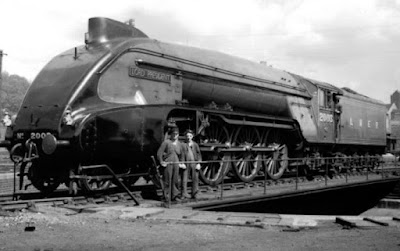 The original P2 was quite a star! It toured many railway events, visited a testing station in France ... 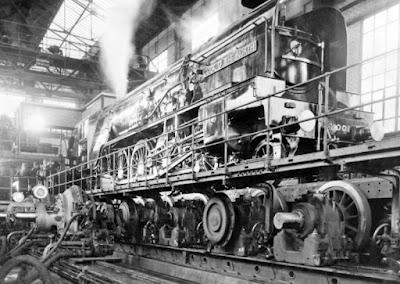 ... and was, reputedly, moulded in chocolate for an exhibition.
Gresley died in 1941 and his successor, Edward Thompson, was not enamoured with the 2-8-2 design and had them all rebuilt as conventional "Pacifics" (4-6-2) ...

... thus depriving history of something rather special.
So, said the Tornado team, let's build a P2 and we will call it "Prince of Wales".

The observant amoungst our esteemed readers may spot that this is the monochrome picture of 2001 (above) fettled up a bit. That is because the real 2007 is not quite finished. 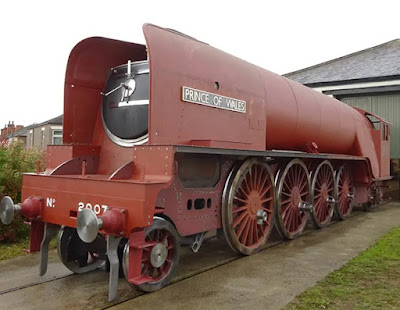 But it is coming along very nicely, thank you! The budget is about £5 million and, at the last count the piggy bank had collected nearly £4 million.
We are using the latest computer aided design and modelling techniques to realise the potential of the original design and estimate that No. 2007 Prince of Wales will cost around £5m to build over a 7-10 year period. The fundraising for the project got off to a racing start with the launch of The Founders Club in September 2013, beating its target by over 350% by the time it closed in July 2014. As with Tornado, funds will be raised for Prince of Wales through regular ‘a P2 for the price of a pint of beer a week’ donations from as little as £2.50 per week.
In addition, specific workstreams for the new locomotive are financed through
The Boiler Club (to fund the construction of the boiler)
The Mikado Club (to fund the heavy motion) Club
The Tender Club (wonder what they'll be funsing?)
The Cylinder Club (to manufacture the cylinder block)
all of which have closed having reached or exceeded their targets.

Projects like the above may well exceed fbb's limited financial resources. James May made the smokebox dart ... 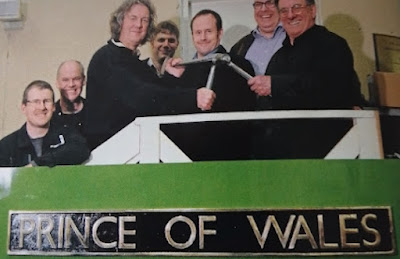 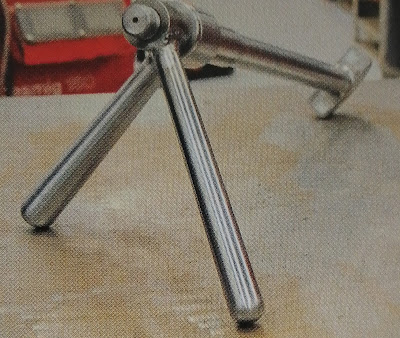 ... and is the door handle for the smokebox. 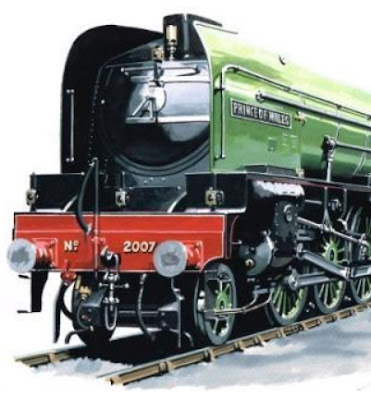 Perhaps a parsimonious fbb could contribute to the dot under the small letter "o" of "No 2007" on the buffer beam?

Apparently when thr P4 is finished, the gang is going to build a new V4 ...

... which is the last loco Sir Nigel designed.
Maybe you would like to own a P2? To celebrate the start of the new-build project, Hornby produced a model. Versions in the Railroad range (less detailed) are still available new and in good second hand condition.

Prices vary, as usual, but you might be lucky enough to get below three figures!

It's The Signal Box! 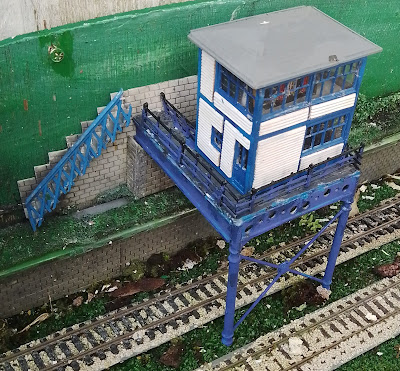 The Peterville Quarry Railway signalbox was built up high to straddle one track when the "main line" was doubled a couple of years ago. The box is some way from other buildings, so cannot be illuminated with one of fbb's string of mini LEDs.
But could fbb use a set of six LEDs from Hornby, designed to illuinate their four and six wheel coaches?
A couple of "bulbs" stayed in the lower floor ... 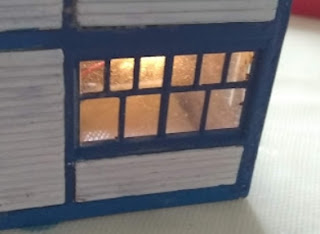 ... and the four remaining LEDs by were poked through a little slot and fixed up above. 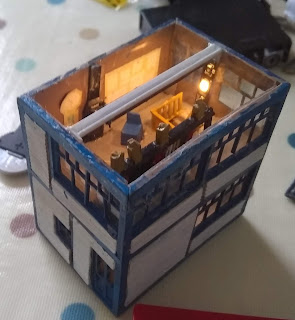 Too bright, as usual, and that back window needs blocking off ... 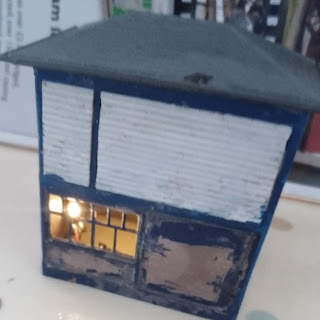 ... or fbb will be illuminating Peterville's distant hills!
But in principle ...
Next Peterborough blog : Wednesday 28th July
Posted by fatbusbloke at 02:00